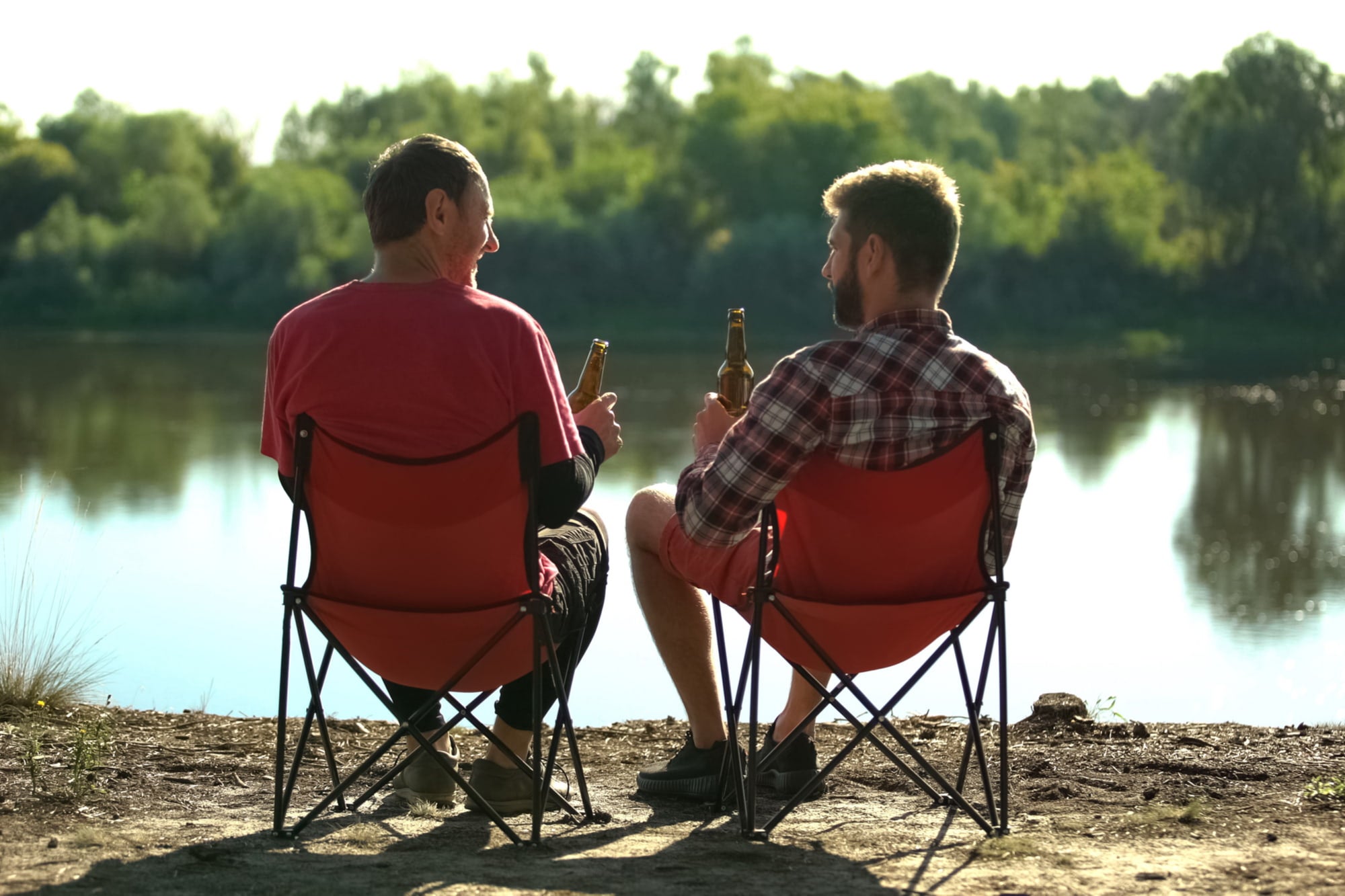 Camping and beer are much-loved pair. We’ve picked ten excellent campgrounds in Michigan that pair up with ten Michigan breweries nearby.

Nothing says camping like sitting around a fire, watching the stars come out one by one, with a chilled beer in hand. Michiganders know this to be true.

Lucky for campers, our fresh water, locally grown hops, and talented brewers mean their are plenty of local breweries where you can pick up some cold ones on the way to the campground. Conveniently enough, Michigan breweries are just as prevalent as state parks; many of them often just a few miles apart. Camping in Michigan with a local beer is a can’t-miss combination for locals and adventurers alike — so we’ve collected ten phenomenal places to camp next door to some iconic Michigan breweries. Enjoy them together for Michigan camping perfection.

The next time you see hops on their vines on your way to go camping in Michigan, don’t be afraid to investigate further; they will soon be made into a delicious ale, lager or stout that you’ll be enjoying fresh out of the cooler around the campfire. 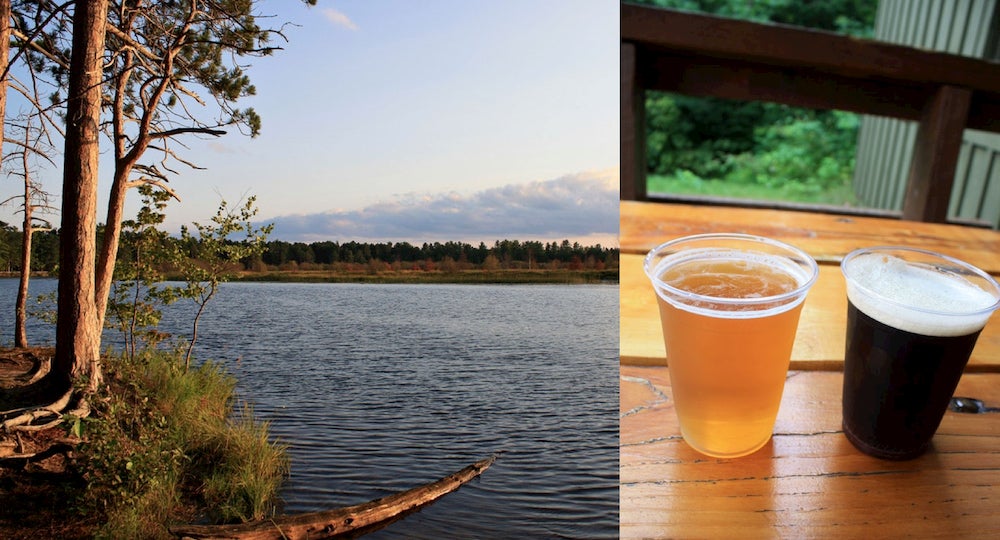 After a day of hiking the falls in the Upper Peninsula, nothing beats having a brewpub within the state park where you’re camping. You can feel like a lumberjack sitting in the brewery — feasting on a tasty steak with a sampling of microbrews — or take some of their blueberry wheat ale, available only in August when blueberries are in season, back to your campsite in a half-gallon jug. 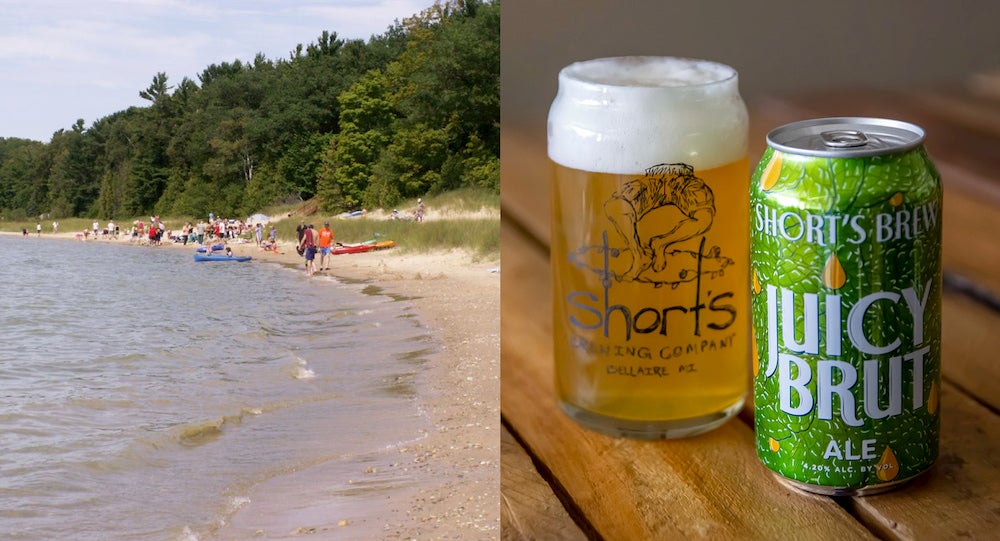 Images from Antrim County and from Short’s Brewery

Barnes Park is often considered a local secret, located right on the shores of Lake Michigan and five minutes from the turquoise-blue waters of Torch Lake (likely the closest you can get to the Caribbean without leaving Michigan). Campers will also be just up the bay from Traverse City, but should entirely take a detour to Short’s Brewing Company in Bellaire, where you can pick up a pack of Short’s Juicy Brut. This session-able and sassy mix of brut dryness and hoppy richness is perfect for long days on the beach. 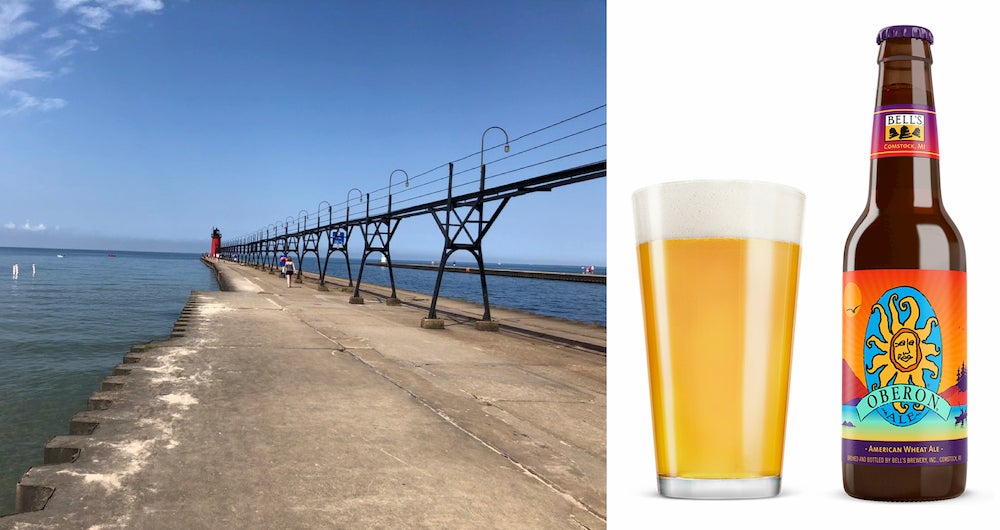 South of Holland on the western shore of Lake Michigan, Van Buren State Park offers campers 220 sites in close proximity to the beach, grand sand dunes to climb, and stunning sunsets over Lake Michigan. Don’t worry about making your way to the brewery via car — a hiking trail runs directly from Van Buren State Park into the the charming town of South Haven, home of Bell’s Brewing. No list of Michigan summer beers is complete without Bell’s Oberon, preferably with a lemon wedge around the rim. Oberon is a wheat ale made from only four ingredients with a spicy hop and mildly fruity aromas.

Images from The Dyrt camper Aaron W. and Odd Side Ales

If you’re looking for campgrounds near Grand Haven, MI, with a brewery nearby, you are in luck. Brewed with Citra hops, the Odd Side Ales’ Citra Pale Ale offers an aroma of grapefruit and pine — a perfect blend of flavors for after exploring Grand Haven State Park. Visitors range from beachcombers to lighthouse lovers, but all campers will work up a thirst walking along the pier out to the scenic lighthouse. A great way to end the day is to park your feet in the sand and pour yourself a crisp and refreshing Citra. You deserve it.

Family-owned Dutch Treat has lots of activities for the kids, like a fishing pond, swimming pool, and gaga ball pit, not to mention nearby swimming on the western shore of Lake Michigan and the city of Holland. All of these activities leave you with lots of time to wet your whistle with some New Holland Dragon’s Milk Stout. A offshoot offering from one of the most popular Michigan breweries, this award-winning, complex stout is bourbon-barrel-aged with vanilla tones, and is best sipped slowly, with an 11% ABV.

Be sure to stop at the Perrin Brewing Company before heading to this campground; access to your rustic campground on an inland lake isn’t as easy as a quick drive. But grabbing Perrin’s Soops Joos double-hopped ale before your trip is more than worth the stop down the road in Comstock Park. After taking your beer to the site, hit the water on a boat ride and hang your hammock between a couple of the multitude of trees in the park area.

Our second Upper Peninsula brewery and campground pairing, Black Rocks brewery is in Marquette, overlooking Lake Superior, which is also where the waterfalls and rivers of Little Presque Isle happen to be. The hiking, serenity, and views here are pretty unbeatable, as is the limited release Presque Ale, which Black Rocks advertises as made for watching sunsets and sunrises (preferably from your seat around the campfire, but that’s just our suggestion).

Images from The Dyrt camper Jen W. and Founder’s Brewing

Hoffmaster is one of the most popular parks in Michigan, but if you can get a spot on a weekend in September, the weather is perfect for hiking the 5 miles of trails or maybe a guided night prowl. When settling in for the evening, maybe skip the s’mores — this dessert beer made with Michigan-roasted coffee, two types of chocolate, and oats is bold and complex, and the perfect treat around a campfire, without sticky fingers from the marshmallows. Or, as the name implies, you can have one in the morning, after all, you’re on vacation. It’s getting nationwide recognition- it just won a silver medal at the Great American Beer Festival and was named among the top beers in America by the American Homebrewers Association.

Images from The Dyrt campers Shari G. and Amy K.

The Platte River State Forest campground is a wonderful basecamp (or non-crowded alternative) to both the nearby Sleeping Bear Dunes and the surrounding Platte River State Forest, each offering a different type of iconic Michigan scenery. If you’re in the mood for something hoppy and sour after your hike, bike ride, paddle or swimming session, the Punk Monk IPA from nearby Brose Brewing is just what the doctor ordered. If you’re traveling with beer-haters, the brewery also offers boutique wines, ciders and meads for you to taste on-site.

Images from The Dyrt camper DH B. and Old Nation Brewing

While IPA’s can be too hoppy for some, M-43 is supremely drinkable, traditionally brewed (like in the old country!), and excellent for sipping whilst playing a round of disc golf or casting for bass off the dock of Lake Ovid in Sleepy Hollow, just a stone’s throw from Williamston, where Old Nation Brewery is situated.

Rachel Cherry White is a wanderer and writer chasing the sun from Michigan to Costa Rica. Last summer, she lived with her husband and four kids in a renovated Bluebird bus in campgrounds all over Michigan. She is a contributor to Michigan HOME & Lifestyle, Fodors Essential Costa Rica, parent.com, ravishly.com, littlethings.com, and others. 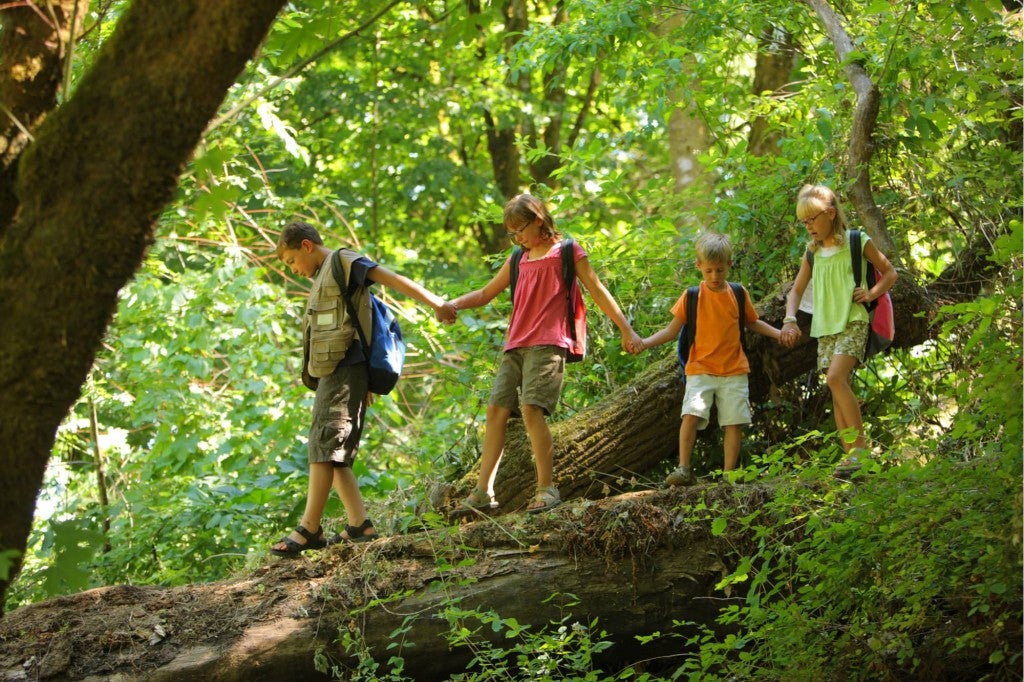 “It’s so hard to put into words the magic that we get to see each time we’re out exploring,” explained Melissa Laurie in an interview… 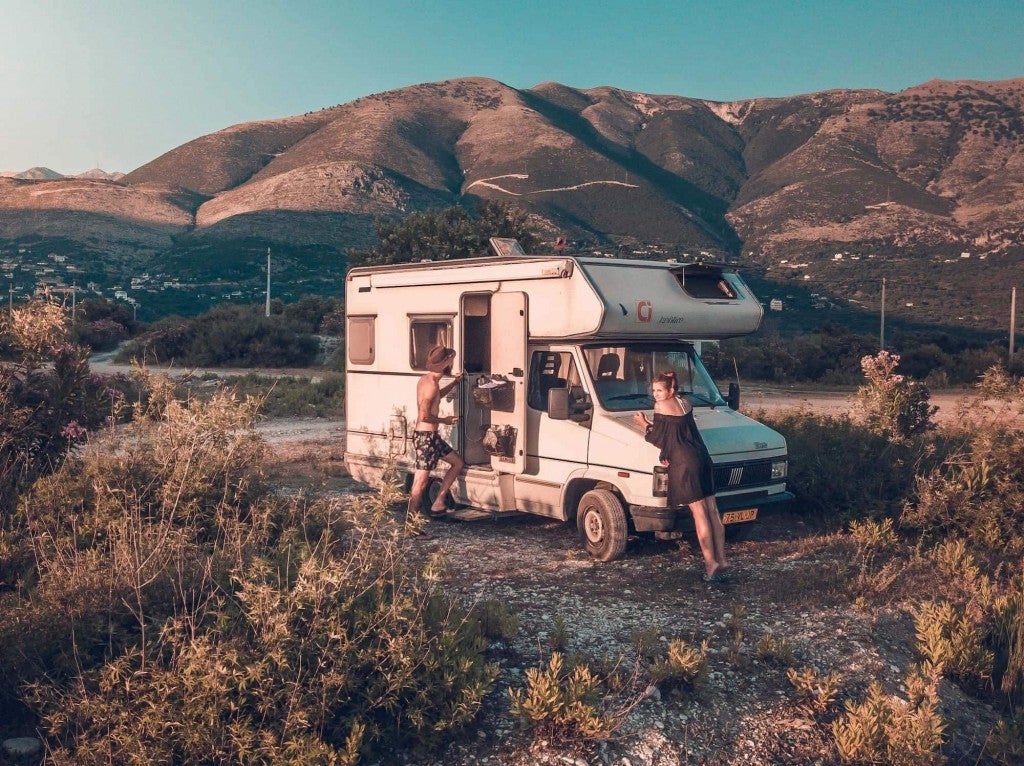 How Generation Z Could Shape the Full-Time RV Lifestyle

One year after college, I found myself curious about Madison, Wisconsin. It was a long way from my home in Little Rock, Arkansas, but I…