Shipwrecks in the Great Lakes are the stuff of legends and lore, from the infamous sinking of the Edmund Fitzgerald in a raging November storm, to odd occurrences of ships running aground. They provide haunting links to the past, and glimpses at former golden eras of transportation and industry. The Great Lakes have accumulated over 6,000 shipwrecks since the 1600s—the majority of these are due to ever-changing weather patterns and some difficult channel passages.

When it comes to visiting these shipwrecks, Michigan is the best place to start. Many of the wrecks in Michigan have established underwater preserves with museums and tours available, so you can go beyond just seeing the wreck itself, from underwater or above, and immerse yourself in the history of these ghost ships.

While it might be an unusual form of camping road trip, there are bountiful recreation areas and camping options around underwater preserves in Michigan. Campers will find a suitable base of exploration near these shipwrecks in the Great Lakes all around the state of Michigan.

5 Preserves of Great Lakes Shipwrecks in Michigan with Camping Nearby 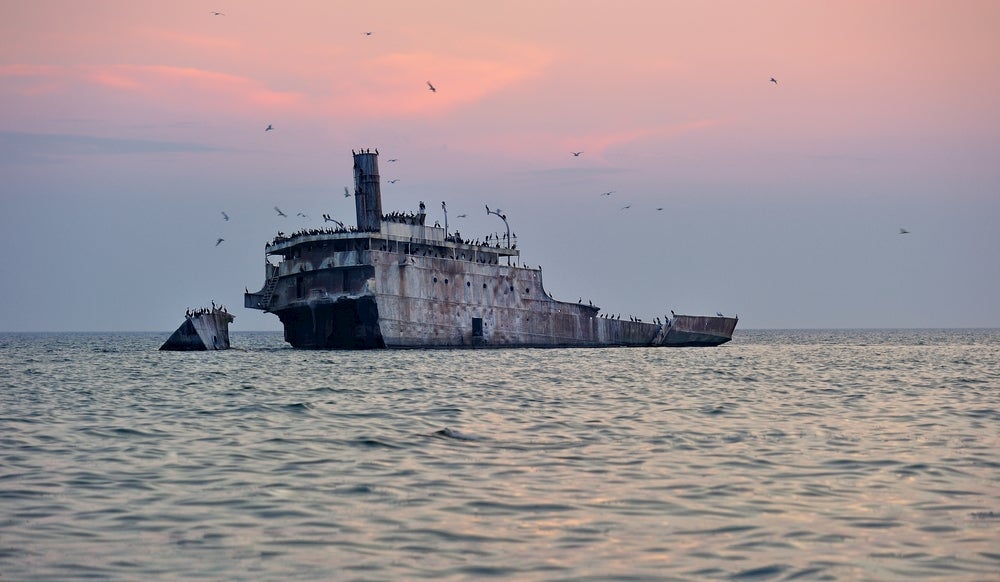 The Manitou Passage is a shipping route on Lake Michigan that passes between the Manitou Islands and northwest Michigan. While considered a safer route during storms rolling in over the open water, the passage didn’t always prove to be a haven for a number of ships in Great Lakes history. Nine ships total lay at the bottom of this passage, each with a story worth learning about.

One ship at the preserve, the Three Brothers, is a wooden lumber freight ship powered by a steam engine dating back to the late 1800s. In September of 1911, the ship began taking on water during a heavy storm and the captain elected to ground the ship on South Manitou Island in an attempt to save it from sinking into hundreds of feet of water. Since the ship was intentionally grounded, it still lies in relatively shallow water, making it perfectly accessible to divers, and in the right conditions, can be seen by novice snorkelers.

Another ship that can be explored at the preserve, the ocean-going freighter Francisco Morazan, ran aground on South Manitou island during a November storm in 1960. This time it was not intentional. The storm pressed the ship against the rocks off the south end of the island, where the hull would eventually break. The massive ship is just a few hundred yards off the shore of the island, and some of it is even visible sticking out of the water from the island. It’s one of the best Great Lakes shipwrecks to visit for novice divers, or even to experience without diving.

Where to Camp: South Manitou Island 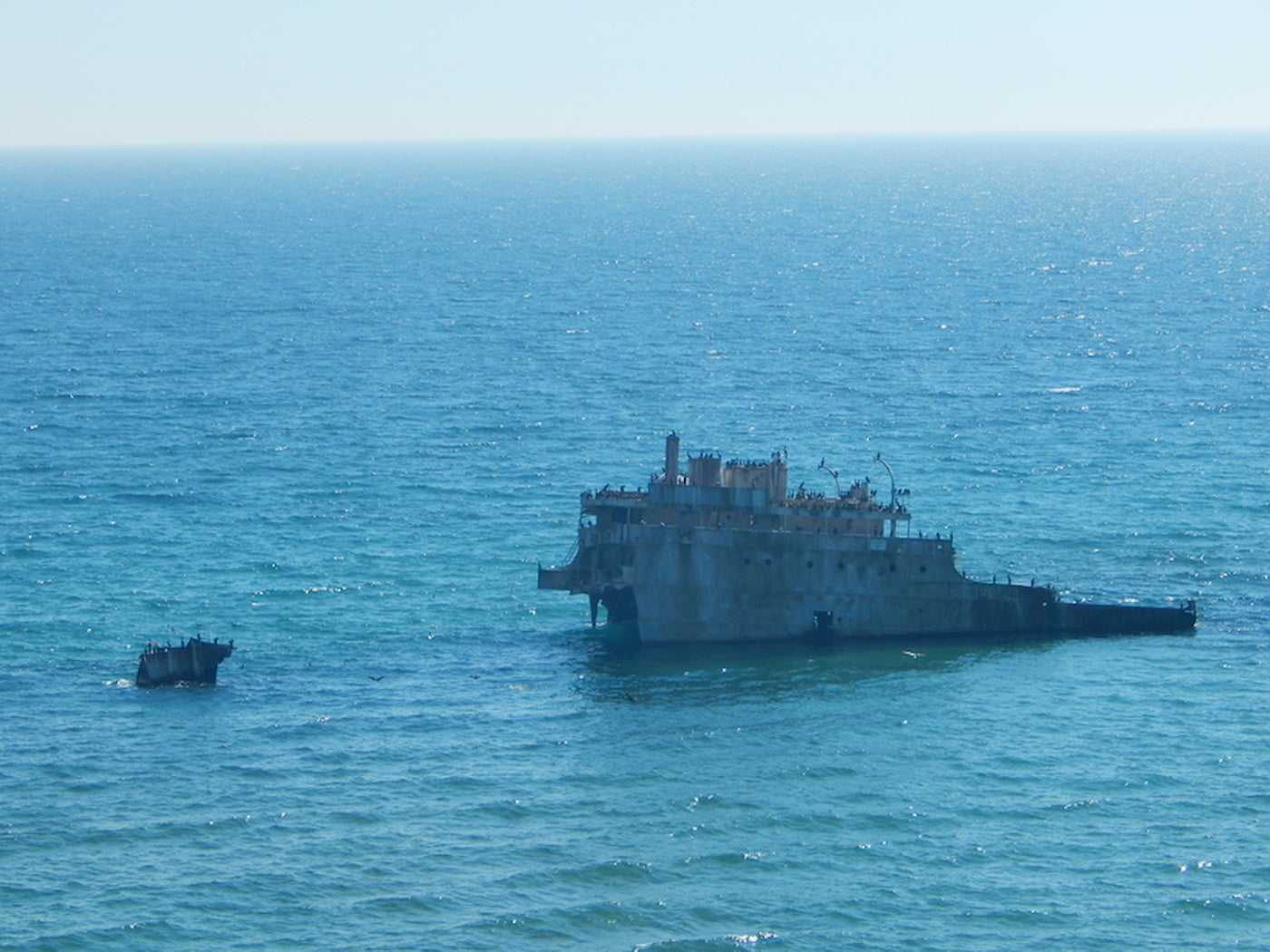 South Manitou Island is part of the Sleeping Bear Dunes National Lakeshore, a uber-popular destination for camping in Michigan. A ferry runs out to the island from Leland Harbor, and there are several hike-in campsites available on the island. Some of the sites even have views of the Francisco Morazan wreck right from the beach. Not only is it the perfect camping area to access the Great Lakes shipwrecks, it’s also incredibly beautiful with rolling sand dunes, lakes and ponds, dispersed private campsites, and excellent hiking.

“There are numerous fun day hikes to do on the island. You can hike to see the wreck of the Corazon, the cedar forest or the old homestead farms. We ate sweet plums that were ripe from one of the old trees on one of the farms. We camped at the Weather Station Campground and swam daily.” —The Dyrt camper Annette B. 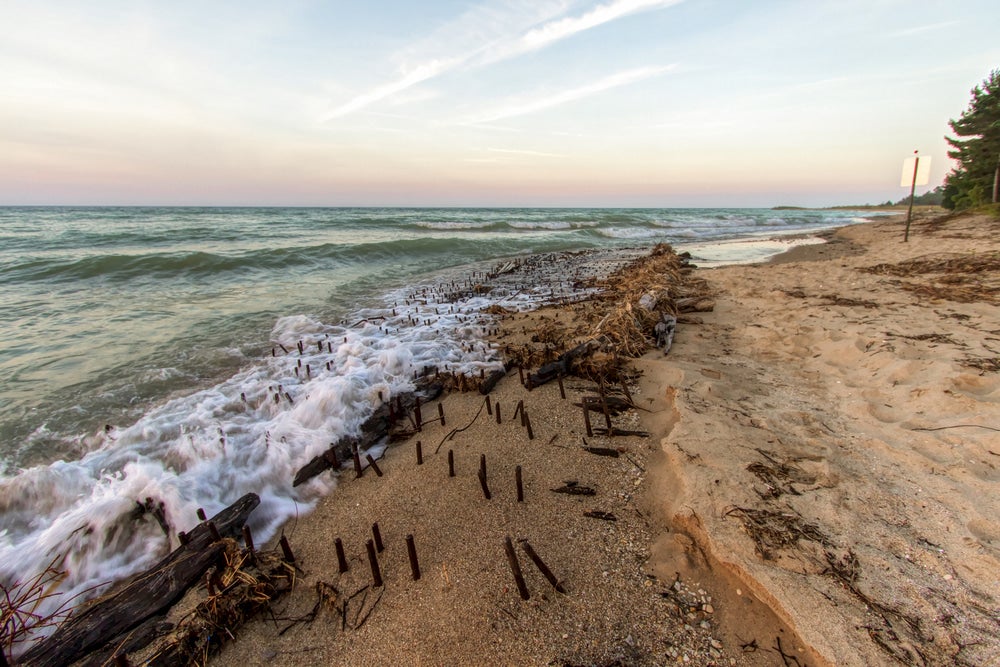 Thunder Bay is Michigan’s largest shipwreck sanctuary. With more than 100 Great Lakes shipwrecks within the protected underwater preserve, the variety allows for both novice and expert viewing. Some wrecks lie in over 200 feet of water, while others are under just inches.

If you don’t feel like diving or snorkeling, Alpena Shipwreck Tours have glass-bottom boats, perfect for families with small children. Plus, the tour guides will tell you all the fascinating stories tied to the wrecks.

One shipwreck to see in this sanctuary is the Montana. The Montana was a 236-foot sidewheel steamer that sunk after a fire in 1914. Once operated by the New York Central Railroad’s Western Transit Company, the ship’s bow is broken, but many captivating hull features are still intact and visible. The engine, boiler, shaft and propeller are still in place and visible. In the wreckage, you can also see the windlass, capstan, and rudder. It’s a great dive for intermediates and experts at 63 feet.

You can also see dozens of relics from different Great Lakes shipwrecks at the Heritage Center onsite in Alpena. 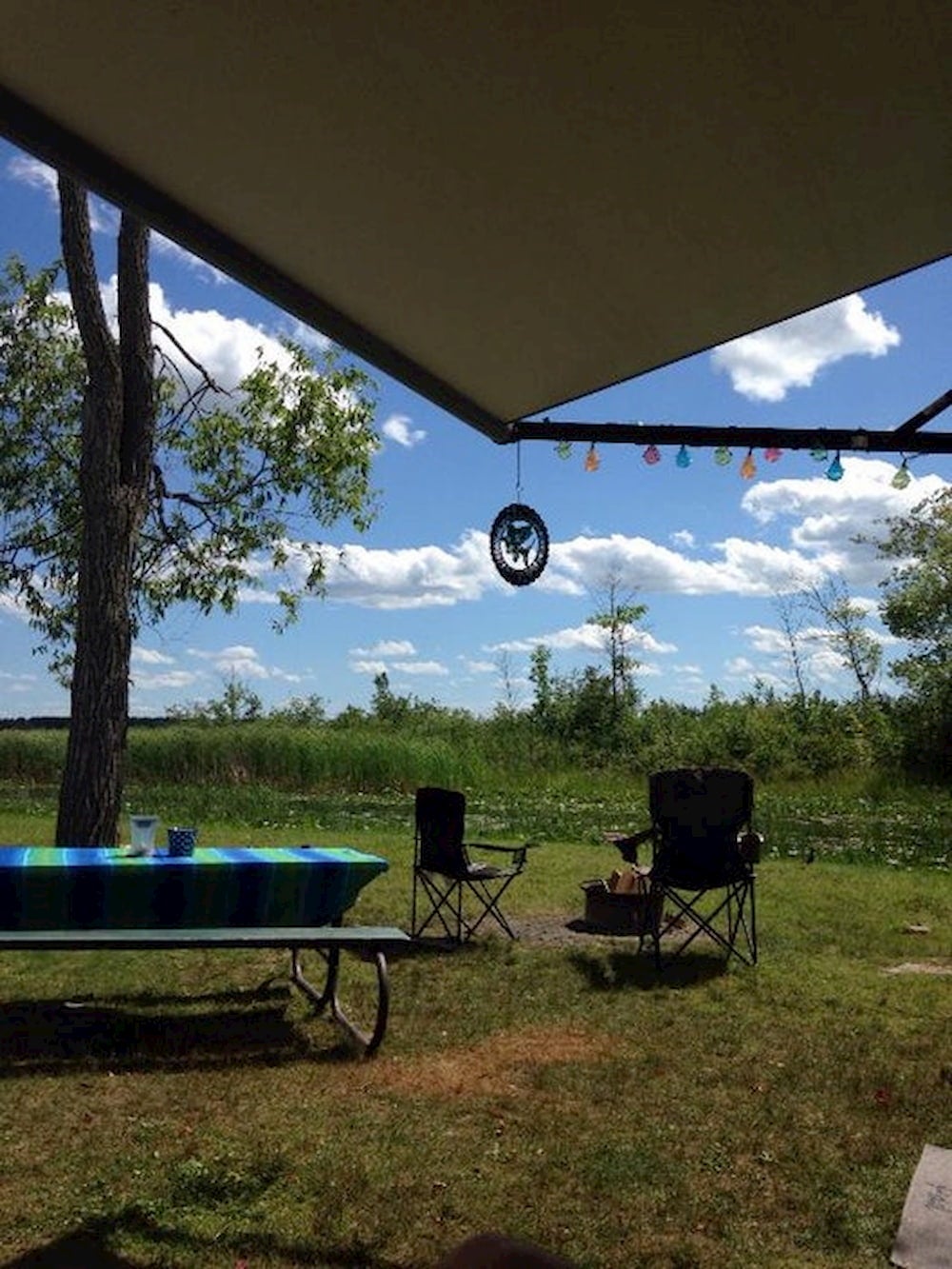 About 15 minutes from the heritage center is the Thunder Bay River State Forest Campground. It has 10 basic rustic sites with room for camper trailers. Every campsite has access to Thunder Bay River, plus there’s a small boat launch.

“Thunder Bay is amazing, it was peaceful and beautiful! Campers Cove was also a canoe livery, so you can take out a boat for the day right at your site! Indoor pool (helpful at Thunder Bay) and lots of extras like mini golf. Clean restrooms. Friendly staff.” —The Dyrt camper Erin H.

The Grand Traverse Bay area near the top of Michigan’s mitten is famous for its beauty, reputation as a top destination for year-round tent and RVing campgrounds and outdoor activity. The area also used to be a main shipping route, as industries of the past used Traverse City as a protected harbor to load and unload cargo. While the bay is relatively protected in comparison to the open waters of Lake Michigan, the large bay is still very deep, and can form its own unique and unpredictable weather patterns. Within the Grand Traverse Bay Underwater Preserve, there are several Great Lakes shipwrecks accessible to divers and snorkelers speckled across the region.

The schooner Metropolis became lost in the bay during an 1886 snowstorm, and subsequently went under. Portions of the wreckage lie in only eight feet of water, while other pieces are as deep as 120 feet. It’s a great spot for a group divers at a variety of levels. Another good beginner diving wreck is the Yuba, lying in about 15 feet of water. Scuba North is a full-service diving center located in Traverse City, and has several options for charters, groups, and training. 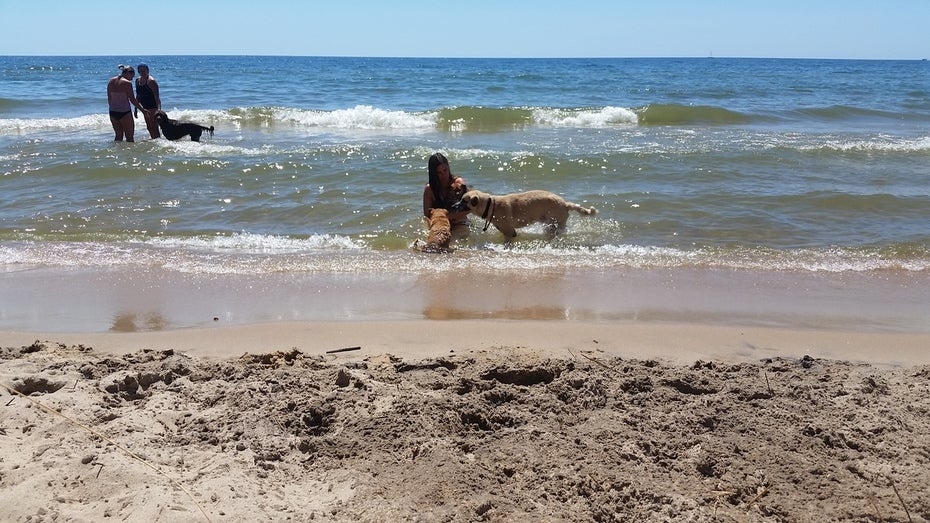 While there are several campgrounds in the Grand Traverse Bay region, the Keith J. Charters Traverse City State Park is probably your best bet for convenience to the shipwrecks. You’ll be just minutes from Scuba North, marinas, and other boat charter options. Not to mention just a short drive into downtown to take advantage of all the great shops and restaurants Traverse City has to offer.

“It’s a well kept campground with plenty of sites. It may not be right on the water but across the street is close enough; there is a nice bridge to walk over the road so you don’t have to stop for traffic. The restrooms are clean and very capable for busy season. Behind the campground is a wonderful bike trail that goes all the way up the Leelanau Peninsula.”—The Dyrt camper Angelia R. 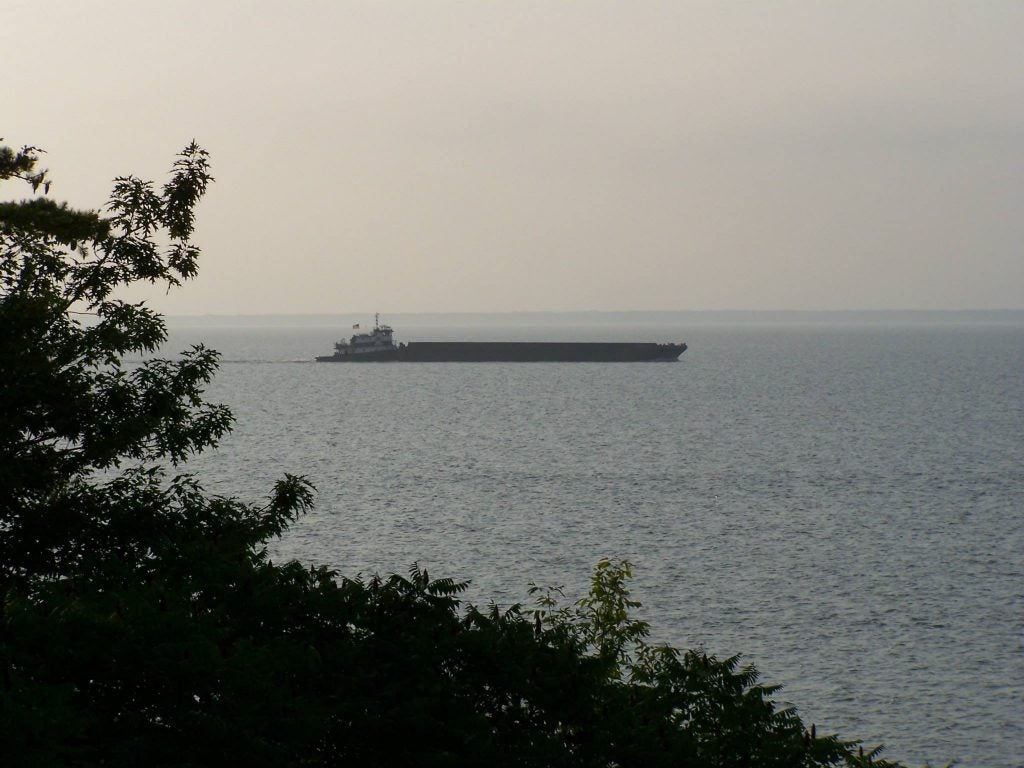 Along the south shore of Lake Superior, the Keweenaw Peninsula juts out far into the lake. Called the “catcher’s mitt” of Great Lakes shipwrecks, this preserve nestled around the peninsula’s end contains 12 official wrecks. One of these Great Lakes shipwrecks is relatively new, and very unique. The U.S. Coast Guard Cutter Mesquite ran aground in 1989 while out on a run to retrieve buoys. The ship was slammed against the rocky shoal to the point where it could not be recovered.

The Coast Guard decided to intentionally sink the ship and create a dive site, which makes this an impressively intact and well-preserved wreck for diving; most of the ship’s equipment is still on the deck. While the practice of intentional sinking is somewhat common around ocean reefs, it’s not as common in the Great Lakes, making it a great bucket list dive in the region. 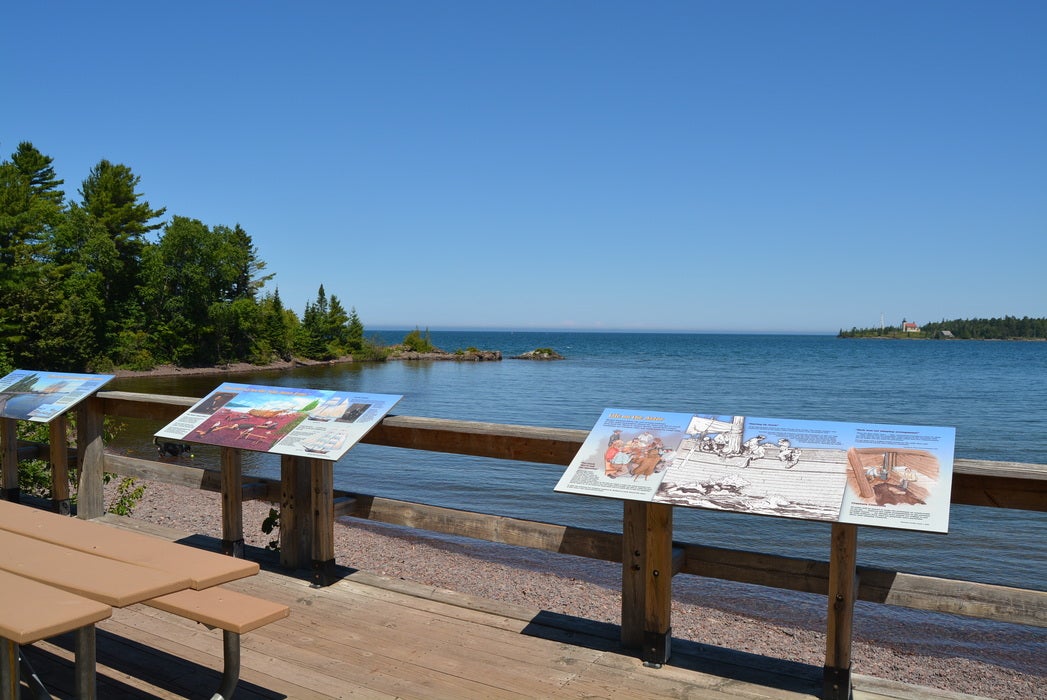 Just minutes from Copper Harbor, the central town located at the tip of the Keweenaw Peninsula, is Fort Wilkins State Park. In addition to a restored 1844 military outpost and one of the first lighthouses built on Lake Superior back in 1866, the park also offers great Upper Peninsula camping. With over 150 sites, the campground includes 20, 30, and 50 amp options for electric hook ups, plus four rustic group sites and a cabin available. Hiking, biking, boating, and fishing are some of the main activities you can enjoy, in addition to being conveniently located near the Keweenaw Underwater Preserve.

“You are in the middle of the best of both worlds. On one side you have Lake Fanny Hooe and in the other Lake Superior. Both offer a great place for water fun. You will also find a nice quiet trail around the camp and a short drive to bigger bike trails. The camp has good size spots and lots of trees, a park for kids to play in, and you are next to the Fort! Great place for history and fun.” —The Dyrt camper Maria M. 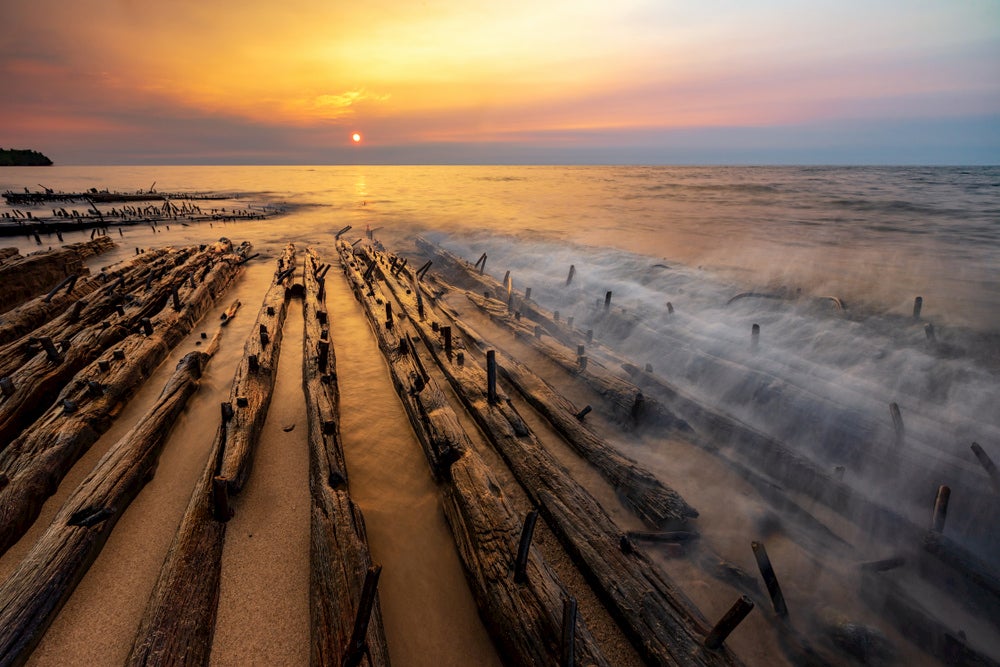 Also located in Michigan’s Upper Peninsula on the southern shore of Lake Superior is the Whitefish Point Underwater Preserve. The sinking of the famous Edmund Fitzgerald took place just 17 miles north/northwest of Whitefish Point, making it arguably one of the most famous preserved Great Lakes shipwrecks in history. In addition to the Edmund Fitzgerald, there are 30 other wrecks to boat and dive to within the area of the preserve. Some of the highlights include the wooden steamer Indiana that sunk in 1858 off Crisp Point, and the 204-foot long wooden schooner Niagara.

The high number of Great Lakes shipwrecks here makes sense when you understand that nearly every ship passing through Lake Superior needs to pass by the tip of Whitefish Point. This unfortunate commonality for the area has contributed to the impressive Great Lakes Shipwreck Museum located at Whitefish Point. Not only does it showcase a large number of valuable shipwreck artifacts, it’s also home to the bell from the Edmund Fitzgerald.

While you might be able to find a smaller campground somewhere closer to this underwater preserve, we recommend camping at Tahquamenon Falls State Park. It’s only about a half hour drive to Whitefish point, plus you’re going to have access to one of the most famous waterfalls in the Great Lakes region. There are plenty of rustic and modern site options great for tent camping or RV camping, and the park is open year-round for winter camping.

“Portage is the most popular campground, due most likely to the closeness to the lower falls. There is a gift shop and snack bar with delicious ice cream. I was impressed with the cleanliness of the bathrooms and the shower rooms. Michigan State parks earn extra marks for their recycling. Sites were generous in size but the interior ones did not have any privacy separation. Try and snag an outside site for more privacy.” —The Dyrt camper Lee D. 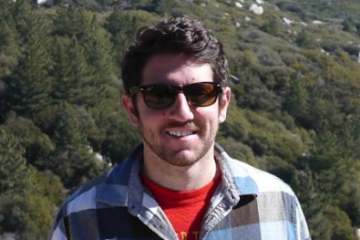 Chris Loud has several years experience as a travel and fiction writer. In the last year he has been co-producing a quarterly print and digital literary lifestyle publication called The Boardman Review, based in northern Michigan. Before that, he spent a few years producing and writing for the travel TV shows Coolest Places on Earth, State to State, and Great Escapes. Chris currently lives in Traverse City, Michigan with his wife, daughter, and dog. 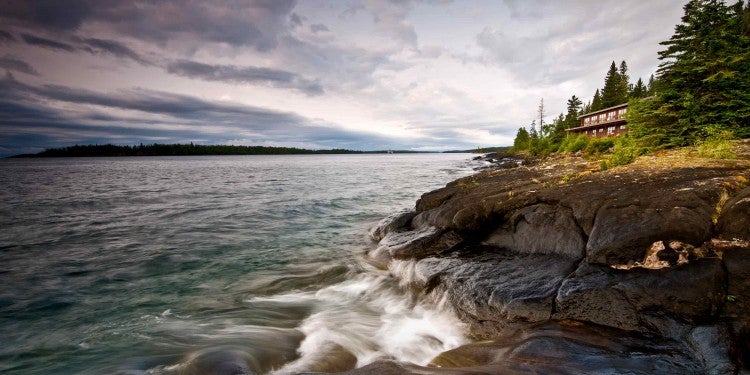 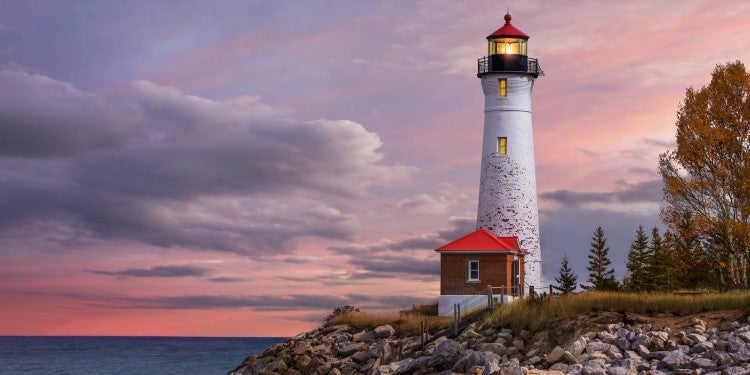 8 Lighthouses in Michigan To See While Coastal Camping 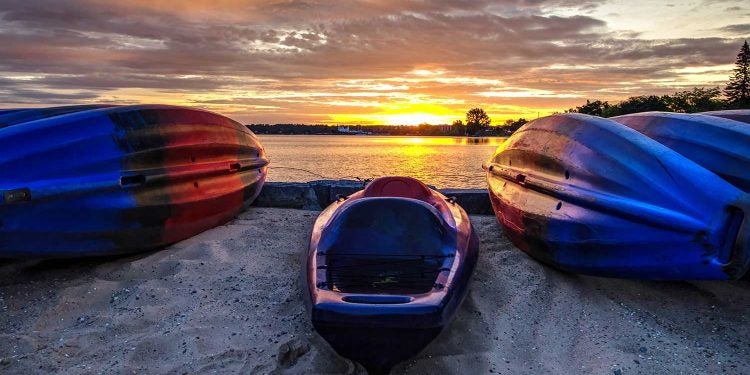 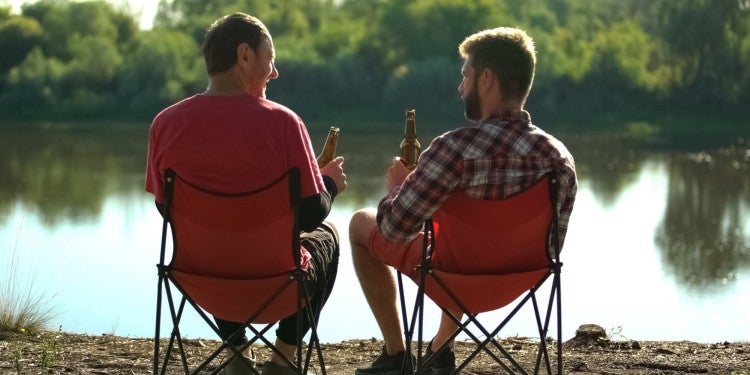 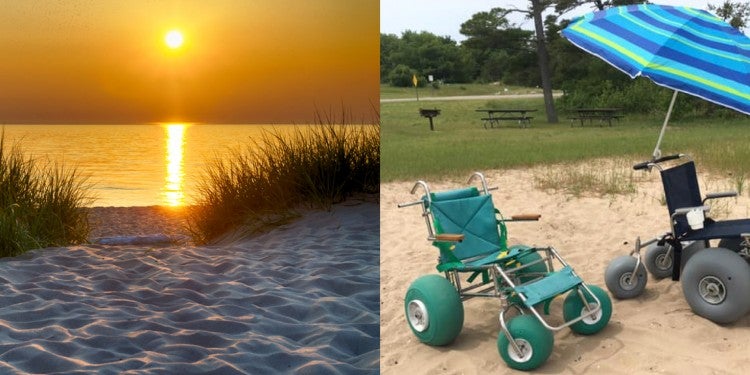