Go Searching for Sasquatch at These Georgia Campgrounds 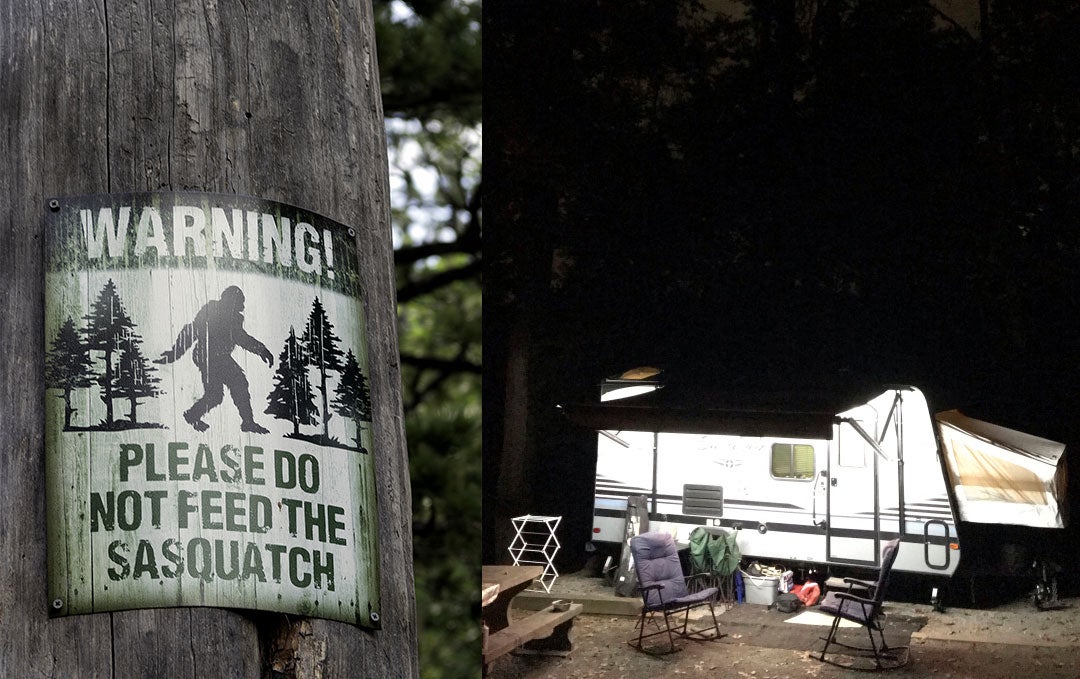 The “Expedition: Bigfoot” museum is easy to pass, sitting right on the edge of Highway 551 in Georgia and surrounded by not much more than pine forest and peeking Blue Ridge Mountain views. The town of Cherry Log, Georgia—population 119—seems like a pass-through town, a place often driven through while people are on their way somewhere else. But one rainy afternoon, which grayed those famous Blue Ridge Mountains, I purposely stopped here to visit the proclaimed largest Bigfoot museum in the world. I was armored with skepticism.

I first felt that armor weaken when we were greeted at the door by two women, one with a child on her hip. I also had my two-year-old on my hip and my mother with me. They greeted us with big smiles and told us the best way to get around the museum. There were no theatrics or conspiratorial nudges to believe in Bigfoot. Wandering around, my skepticism gave way to curiosity.

Expedition: Bigfoot was no mere roadside attraction. After sifting through the many artifacts, recordings, anecdotes, and cross-cultural folktales about Bigfoot, all of which was polished in its presentation, I realized the legend deserved more than an eyeroll and a scoff. How have so many people around the globe had similar encounters with the beast?

Turns out that many Georgians don’t have to look farther than their backyards to experience a Bigfoot sighting.

Camp Near Bigfoot in Georgia 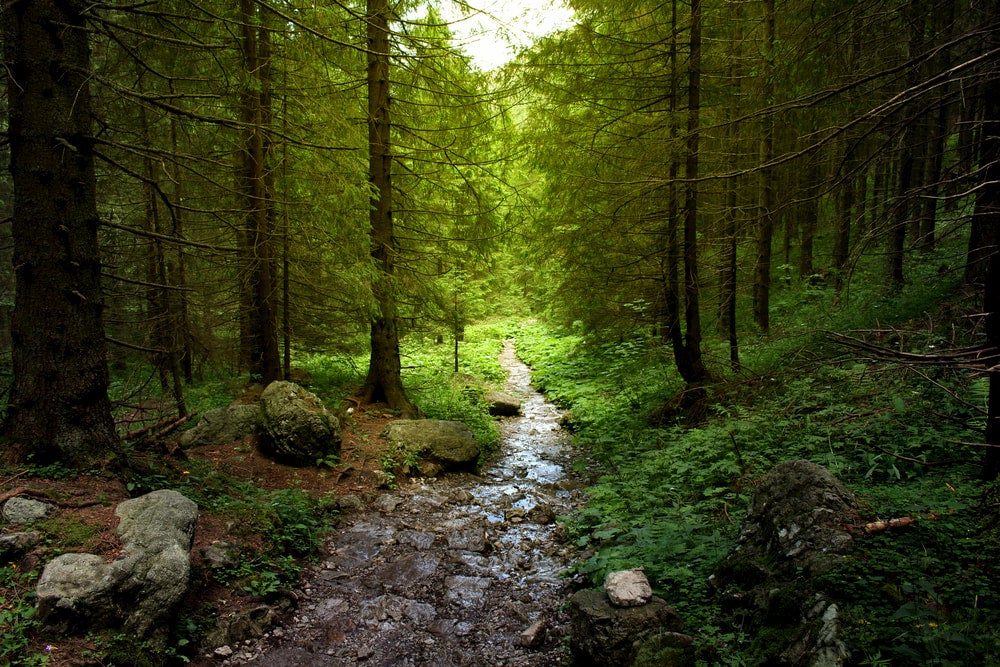 Massive yet elusive; mysterious yet famous; creature yet man-like; this animal of contradictions has been sighted in Georgia even outside the museum.

The Bigfoot Field Researchers Organization, documents, investigates, and classifies Bigfoot encounters across the United States and Canada. Their interactive map shows 132 documented Bigfoot encounters in Georgia, many of which cluster in the remote areas where people camp.

Depending on your regional location, Bigfoot in Georgia goes by many names. You may hear some colloquial terms to refer to the mysterious creature. The area near the Chattahoochee River that forms the Georgia-Alabama state line has reportedly called a Sasquatch-like creature “Sheky Bean.” The Okefenokee Swamp to the south may be inhabited by a “Pig Man” or “Swamp Ape.” No matter what you call Bigfoot, you can camp in Georgia with hopes of a glance at the elusive legend, if you believe them to be out there.

Bigfoot Sightings in Georgia (with campgrounds nearby) 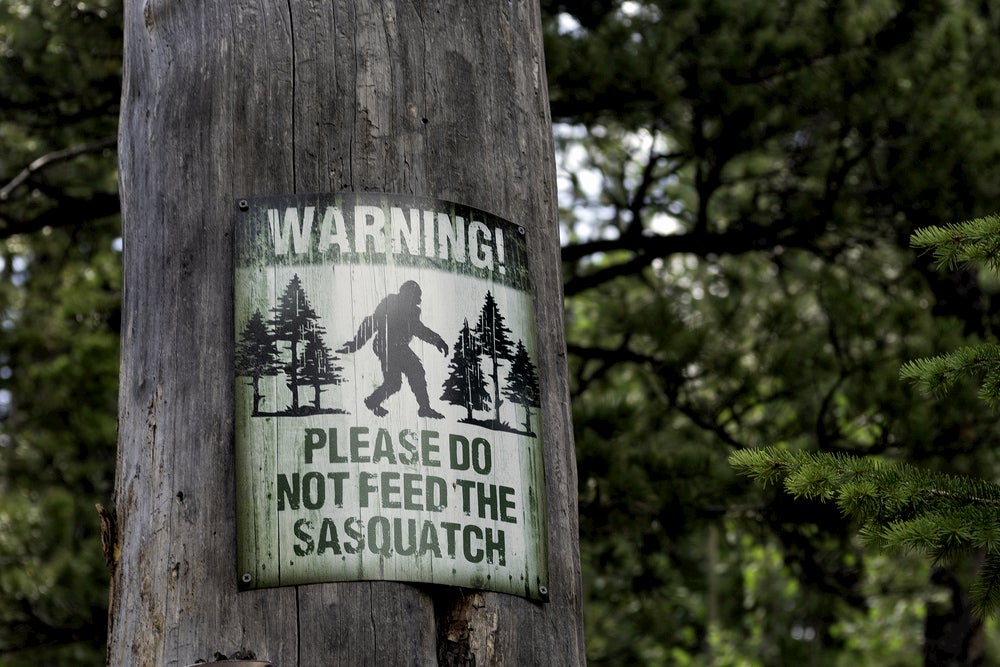 The BFRO database includes nationwide reports of experiences with Bigfoot, and each sighting is assigned a classification. Class A are reports of clear sightings where chances of misidentification (say a bear print was mistaken for a Bigfoot print) are slim. Class B reports are still reliable, according to BFRO, but may have occurred when visibility was poor, or may be a secondhand account from a credible person. Class C reports have a high chance of misinterpretation due to lack of evidence. BFRO keeps most of the Class C reports in its archives, but does not publish them online.

The following are all examples of Class A Bigfoot sightings in Georgia. 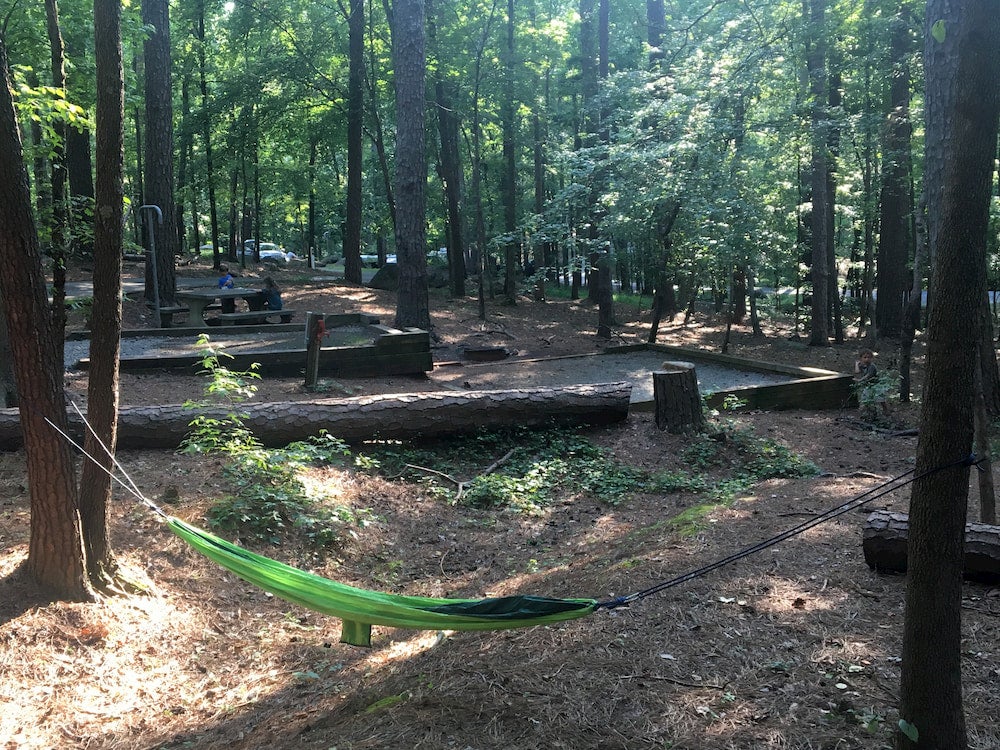 On the cusp of the Georgia–Alabama state line and off the banks of the Chattahoochee, two men fled from a towering creature that approached their tent while camping at Rood Creek Campground one summer night in 2000.

The two campers were alerted to something strange in the woods when their yellow labrador started anxiously signalling into the dark forest. When the man stepped out of his tent, he was met with a figure that towered over him, dwarfing his 6-foot stature. The two campers shot at the tall bipedal creature, got in their truck, abandoned their camping equipment, and pulled over at a nearby BP Quick Stop to report the sighting.

The BFRO confirmed this sighting and annotated it as a Class A after interviewing the BP Quick Stop employees, the local police force, and a reporter who wrote a piece on the local Bigfoot activity.

Rood Creek Park Campground is operated by the Army Corps. of Engineers. The camp has 30 available campsites, it’s open year-round, and is free for the public to stay a maximum of 14 days. A boat ramp and 4.3 miles of looped hiking are available at the campsite. Plots accommodate tents and RVs up to 35 feet. Do not attempt to shoot any unidentified creatures. 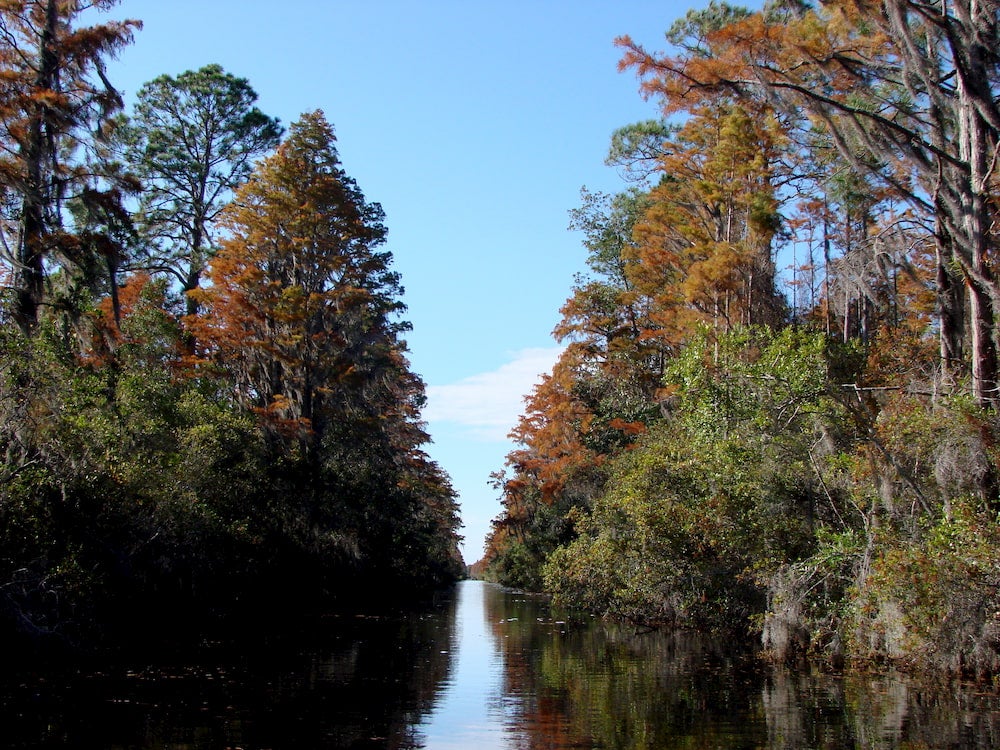 Just shy of midnight a man and his wife were driving south on the deserted highway 441 in Clinch County Georgia. Just west of the Okefenokee Swamp, a seven-foot, lanky and long-haired figure stood at the side of the road. Moments later, a potent sewer-like smell filled the car.

Georgia’s Okefenokee Swamp is familiar terrain for these ape-man like creatures, and some other beasts of lore, sometimes called “the South Georgia Pig Man” and the “Skunk Ape.” If you follow the Okefenokee Swamp into Florida, a mysterious but similar being is referred to as “The Bardin Booger.”

When the couple stopped for gas and explained what they saw to some locals, one man said, “You saw a swamp ape.”

The Okefenokee Swamp is a massive 400,000 acres of fresh and black waterways, prairies, and forest. Overnight camping is permitted, but permits and careful planning are required. The swampy wilderness can be explored during a multi-night stay by canoeing the winding water trails to various designated primitive camping spots.

One and two night trips can be reserved in March and April, while later trips can last three or four nights. Your canoe trail itinerary and designated camping areas aren’t the only things to consider while planning. Make sure to also research water levels. A low water level in the Okefenokee will render some trails inaccessible by canoe and kayak. If you already have a reservation, the National Wildlife Reservation will alert you if a trail on your itinerary suddenly needs to close before your trip.

Because the swamp waters can be isolating and difficult to get out of if you need to leave, it’s especially important to pack thoroughly for your overnight wilderness camping trip in the Okefenokee. Overnight trips can be reserved by calling (912) 496–3331 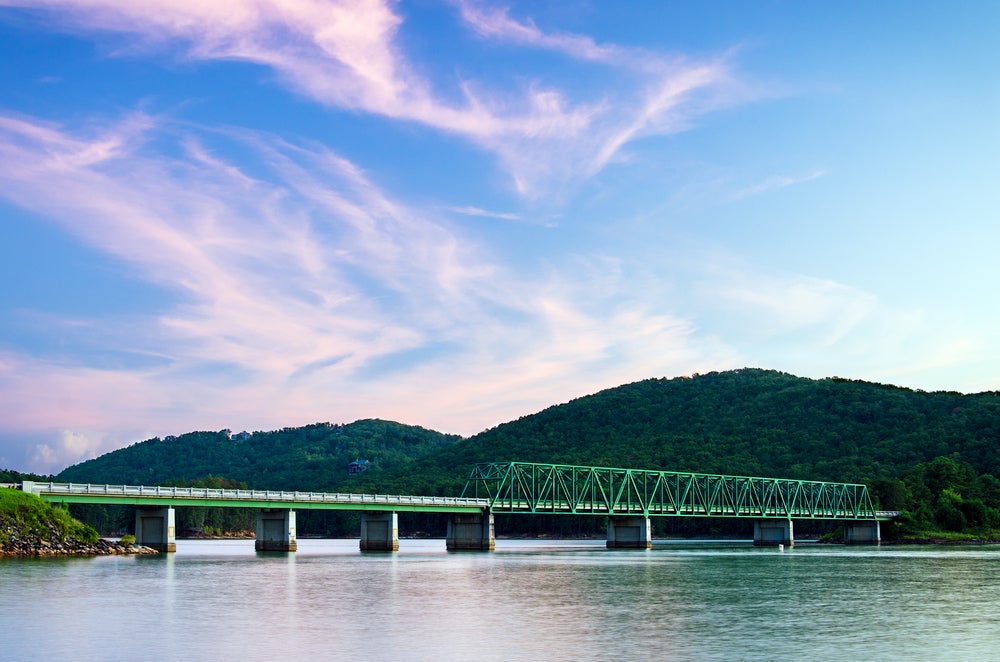 It was an ordinary summer morning off the banks of Allatoona Lake for one group of paranormal investigators who had been examining an abandoned cemetery for weeks. Throughout the inspection, rocks were thrown at the team from an unknown source, howls were heard at night, and tracks were spotted with no explicable source. They chalked it up to hauntings. But one fateful morning, they became believers in a different kind of being.

At the edge of the cemetery, the paranormal investigator and his team mate made eye contact with a 7-foot dark brown Bigfoot. This sasquatch was not alone, accompanied by a still-large, but smaller in stature Bigfoot. When the witness attempted to get closer the two creatures walked away, but first picked up a baby Bigfoot out of the tall grass, placed the adolescent on its shoulders, and left unhurried.

According to some, there appears to be some correlation between Bigfoot sightings and rural cemeteries.

Campers can stay at Allatoona Lake by camping at Red Top Mountain State Park. Several accommodations are available, including cottages, a lakeside yurt, and a campsite with 92 plots. The majority of sites are equipped with electric, but about 40 are not, so make sure to select this during your online reservation if it’s a necessity.

Red Top Mountain State Park is a popular respite from the Atlanta bustle. With a 12,000-acre lake on site, the summer months will usually be busy, so try to reserve as early as possible or plan your trip for the slower winter season.

Red Top Mountain also offers more than 15 miles of trails through Georgia’s thick forests. The shoreline of Allatoona Lake is also a Netflix star, having served as the location for the dark drug-trade drama, “Ozark.” 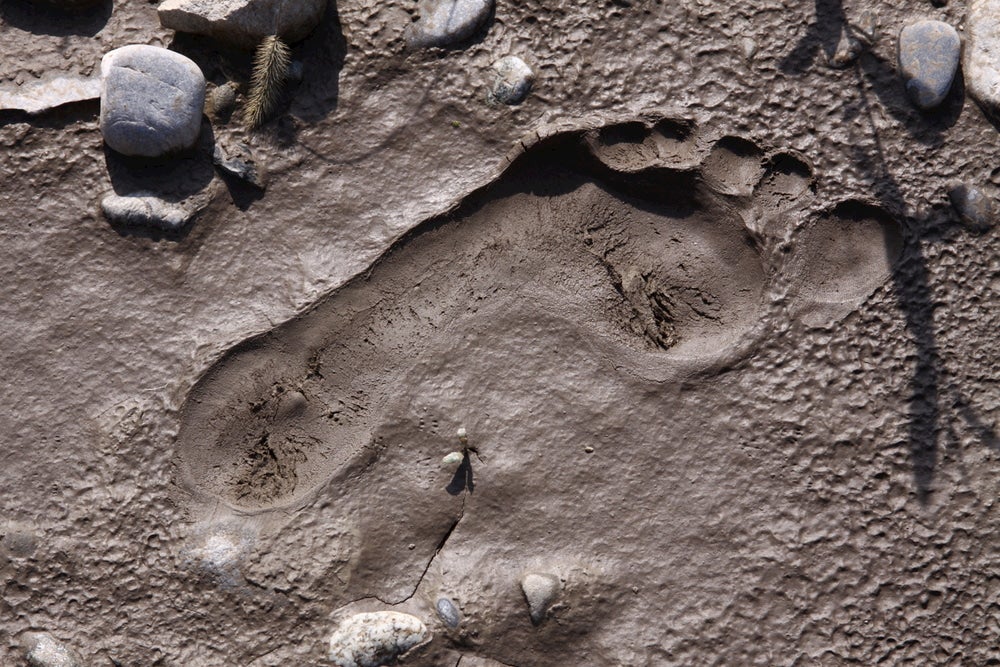 Assuming the beast is real, the “Bigfoot” in Georgia is just a small subsect of the species across the world. And different cultures call Bigfoot different names: Nuk-luk in Canada, Omah to Houma Native Americans, the Mande Burung (Jungle Man) in India. At the very least, it’s interesting that many cultures around the globe have some variation and historical myth of this creature that many consider a hoax.

Some of the most interesting evidence that supports the existence of Bigfoot is the whorls that have been taken from cast prints. Just like a human fingerprint, some alleged Bigfoot prints are so clear that the anatomical detail is visible. The intricate amount of detail involved in the print evidence would be incredibly difficult to replicate for the sake of a hoax, according to anthropologist Jeffrey Meldrum.

From an evolutionary perspective, many believers conclude that the ancestor to Bigfoot is the Gigantopithecus, an extinct genus of ape that walked the earth 100,000 years ago. As the name suggests, these creatures were massive, the largest primates ever known to have lived. Gigantopithecus reached heights of 9.8 feet and weighed more than 1,000 pounds.

I expected the Expedition: Bigfoot! Museum to be 4,000 square feet filled with low-quality photos of some mid-stride blurred figures and a kitschy gift shop. I was half right. I told myself it was probably no more than a quirky roadside attraction for people bored on road trips and for the Sasquatch-devoted who needed no more convincing.

It was fun to be proven wrong. The museum wastes no time in dramatically attempting to convert the nonbelievers by simply laying out the evidence it has in many different mediums–and there’s plenty of it.

The Expedition:Bigfoot museum is thoughtfully, and dare I say convincingly, laid out to present the evidence of Bigfoot’s existence in a logical and engaging manner. I was only half right because there is a kitschy gift shop at the end for all your Bigfoot knick knack purchases. 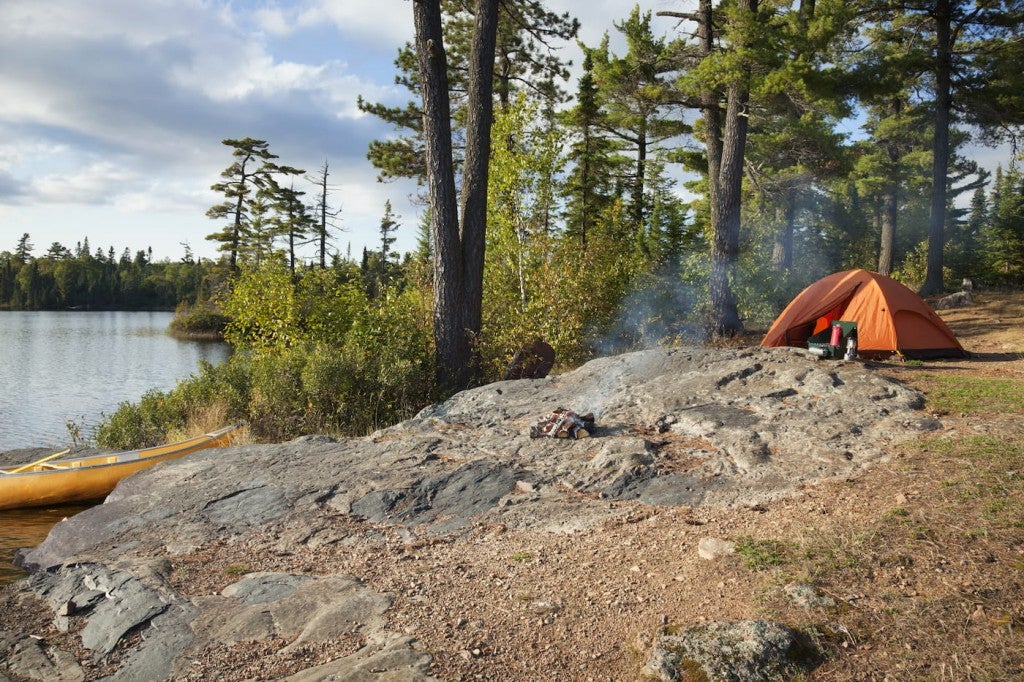 How to Get Started with Canoe Camping

Canoe camping is one of the oldest forms of travel and exploration of the wild places in the United States. Native people from tribes across… 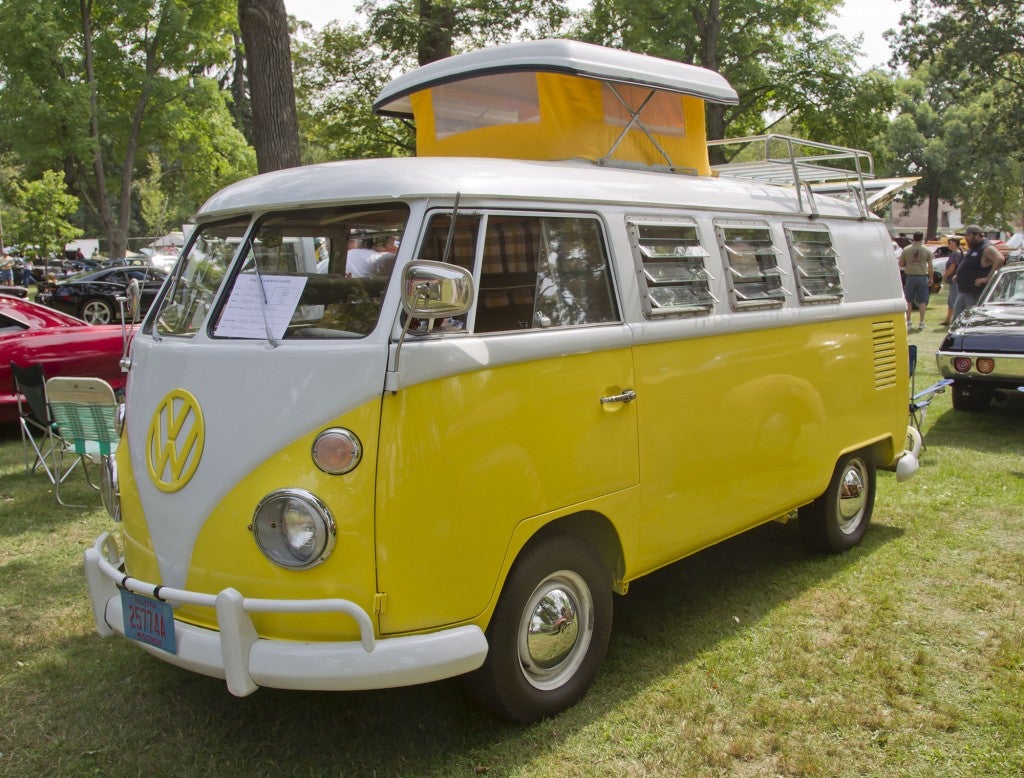 7 Tips for Purchasing a Vintage Camper

This article on purchasing vintage campers was compiled by RV Trader. A vintage camper has the ability to transport us back in time. They have an…