A Brief History of Recreational Camping in America 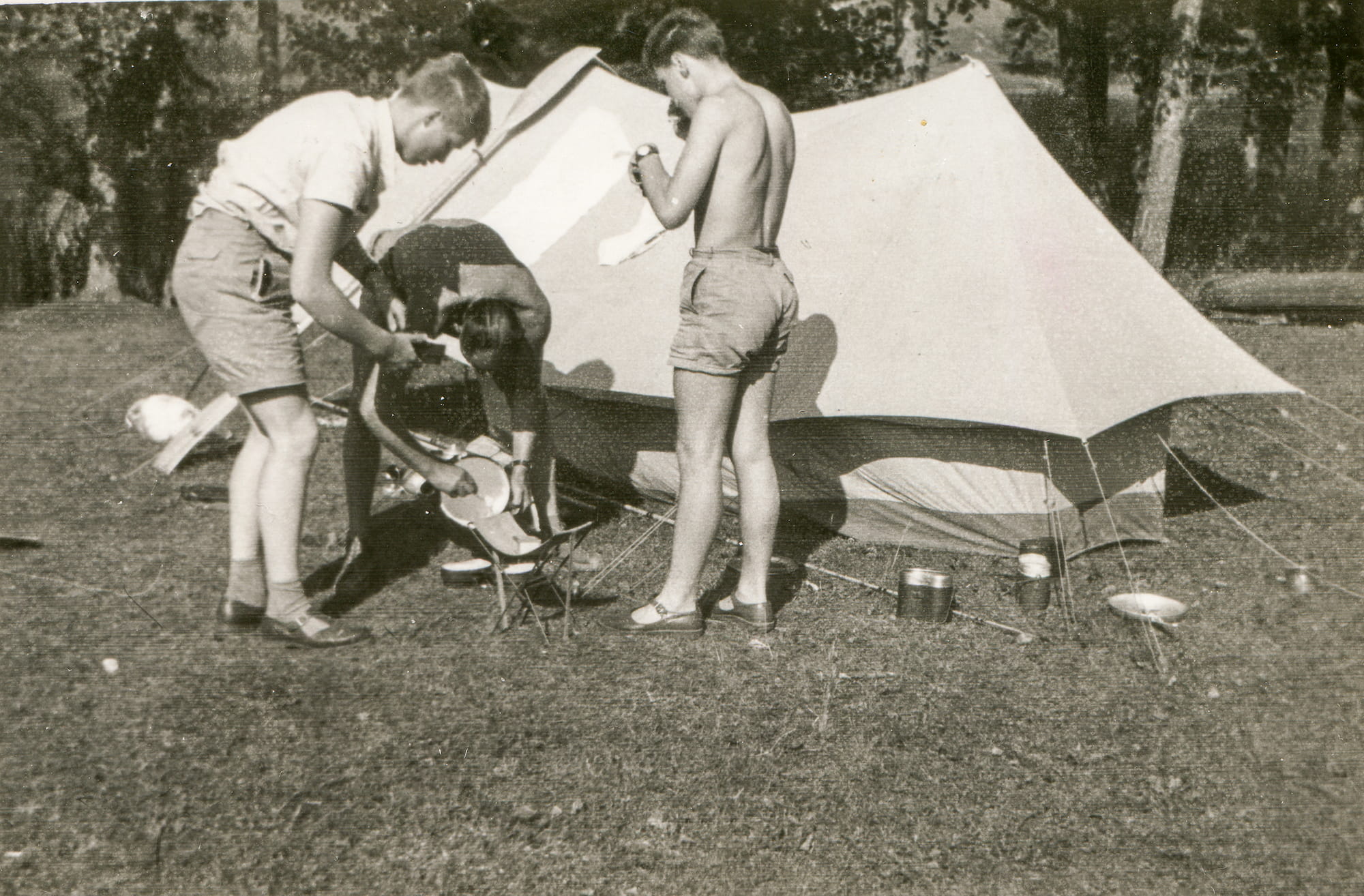 This article is brought to you by Midland. Midland Radio has 50 years of its own history, making walkie talkies and two-way radios. Take your camping game to the next level with some Midland gear.

For the overwhelming majority of human history, people have “camped” as a way of life.

We humans lived a nomadic existence out of necessity; moving with the seasons, following food sources and avoiding inclement weather. A roving lifestyle in nature was all we knew for millennia.

That, however, is far removed from the type of camping we’re talking about today. We’re interested in modern camping; the campground, sleeping bag and tent, kind of camping. And we’re taking a look back at the early days…

How Recreational Camping Got Its Start 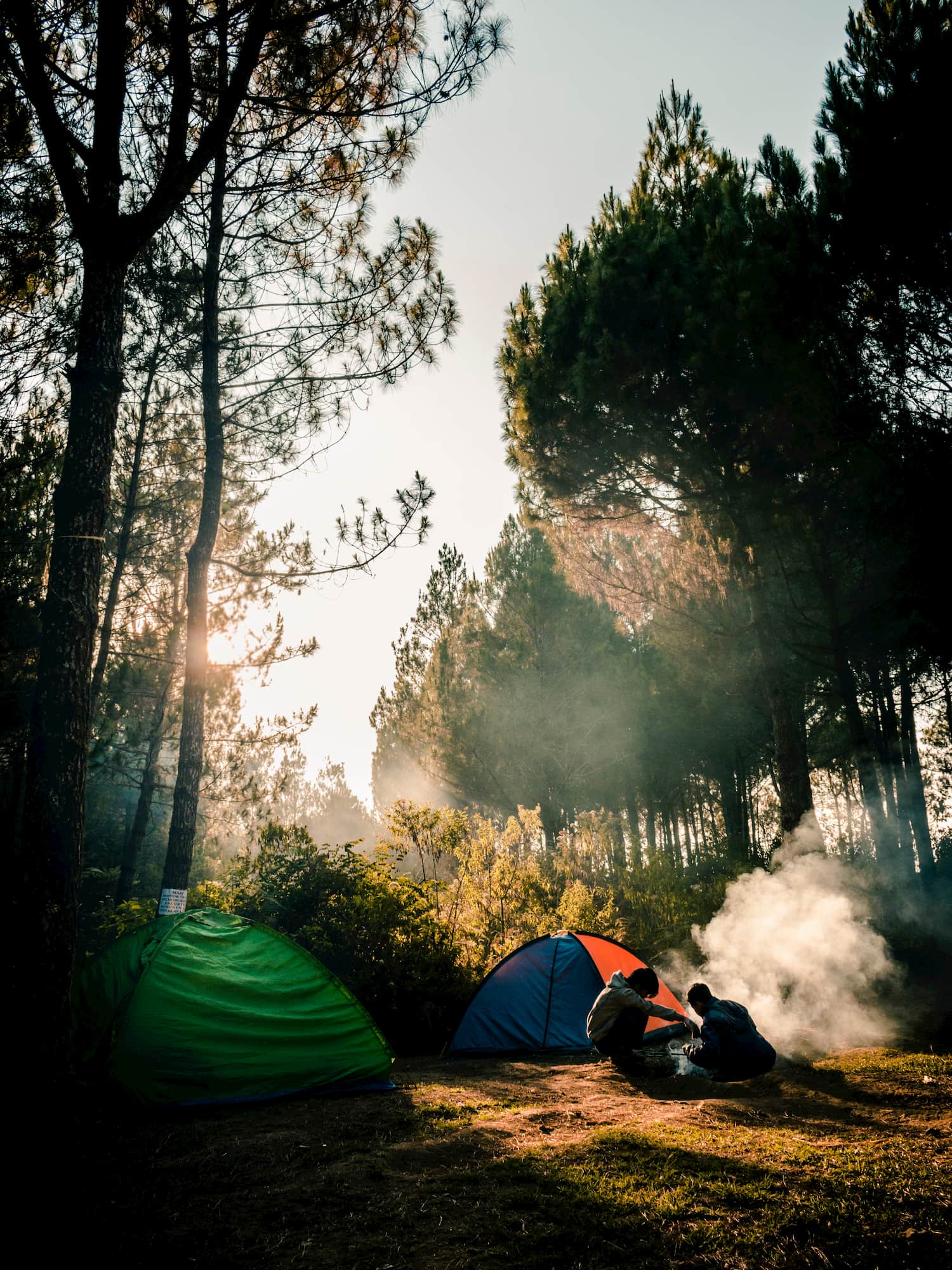 Experts on the topic agree that the history of camping in America really begins at the end of the 1860s. Prior to this, camping as recreation was essentially unheard of. According to Terence Young, the author of Heading Out: A History of American Camping, the word “camp” was probably inspired by military encampments.

While those military encampments may have introduced us to the terminology, the first generation of modern campers in America were largely inspired by one man: William H.H. Murray.

Murray was born in 1840 in the newly founded town of Guilford, Connecticut. He was a Yale graduate who went on to become a highly regarded minister at churches in both Connecticut and Massachusetts. According to The Smithsonian, he took his first recreational camping trip during the summer of 1864. His destination of choice, and for many more to come, was the Adirondacks. Situated in upstate New York, the Adirondack region is one of the most well-known camping destinations in the country today.

During the first few years of Murray’s camping excursions, he made a practice of writing about his time there. These writings were informal and unpretentious, focusing on the practical aspects of his trips. He covered topics like what to wear, how to get there, the landmarks to see, the costs involved, along with a few outright ridiculous bits of advice on how to deal with the local wildlife…like lighting an old tree stump on fire to fend off wolves!?

His writings were meant to be nothing more than “narrative exercises” for his personal use. These exercises were a common training tool for ministers, which they used to improve their sermon writing skills. But his casual writing style would become a big part of his popularity with readers.

Jumping ahead five years in the history of camping to 1869—Murray now has years of Adirondack experience under his belt, a notebook full of narrative exercises, and a friend in the publishing business. Despite some initial reluctance from the publisher and from Murray himself, his writing is ultimately submitted for consideration. It took all of two days for the publisher to read and approve it for immediate publication.

His book is titled Adventures in the Wilderness, and it becomes an instant success. The idea of camping-as-recreation has officially been established in America.

Thanks to Murray’s book, the popularity of taking a summer vacation in the Adirondacks continued to swell year after year. Adventures in the Wilderness became so popular, so quickly, that it was included for free with any round-trip train ticket to the area.

According to The Smithsonian, the summer population of the Adirondacks was around 3,000 people in 1869, at the time of Murray’s first publication. Thirty years later at the turn of the century, about 25,000 tourists were venturing to the Adirondacks each summer. 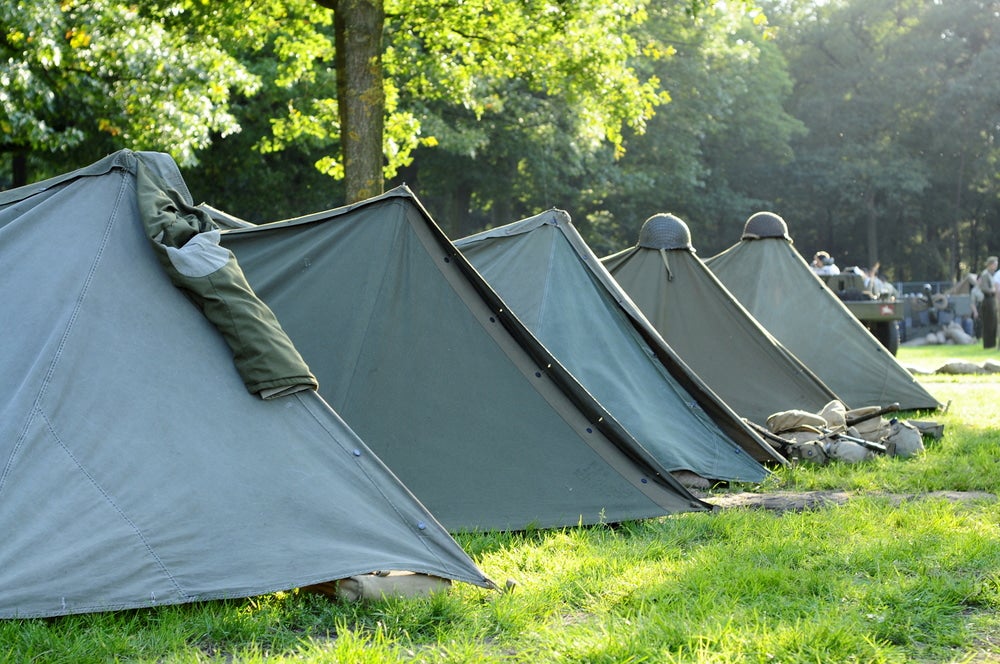 At this point in the history of camping, momentum is starting to grow. However, we’re still in the 1870s, which means traveling even modest distances requires a considerable amount of time and money. Camping remains just out of reach for the average American household.

In 1901, Thomas Hiram Holding makes his first waves on the camping scene. Holding, from the United Kingdom, is widely considered the godfather of modern camping in the UK and throughout Europe in general. His infatuation for cycling and outdoor excursions led to the founding of an organization that he dubbed the Association of Cycle Campers. As evidence of his lasting influence on the camping world, his organization lives on to this day, but has since been renamed the Camping and Caravanning Club.

In 1908, Holding’s popularity surges again after the release of his iconic book, The Camper’s Handbook. At the time of writing, Holding had already amassed a lifetime of camping experience. He credits his lifelong passion for camping and outdoor excursions to a 1200-mile journey across America that he made with his family back in 1853.

Holding and Murray were both instrumental in taking recreational camping to the mainstream of popular culture.

Right around the time that Holding and Murray were camping and writing about it, another legendary name was busy waxing poetic on the virtues and beauty of the natural world. John Muir is well-known for his writing, but his founding of an environmental organization would be the root of his most lasting impact on the world.

Muir, with the help of a small group of friends and colleagues, started The Sierra Club in 1892 as an organization devoted to environmental preservation. Muir is elected as the club’s first president—a position he held for the next 22 years, until his death in 1914.

1900s: Railroad Companies Push Camping To The Next Level

As time continues to march forward, train travel is now becoming essentially ubiquitous and is more far-reaching than ever before. Plus, there’s something called the “automobile” that has started taking over the streets of America.

Camping as a pastime is reaching a tipping point.

Railroad companies played an important role in the establishment of national parks and the development of outdoor recreation. It was all the way back in 1872 that Northern Pacific Railway, and a handful of other companies, successfully lobbied Congress to officially make Yellowstone the nation’s first national park.

The railroad companies were leaning into the idea of promoting train travel as the premiere way to enjoy America’s natural beauty. Right around 1900, every single railroad company in the country agreed to eliminate billboards along their passenger routes to ensure their customers had uninterrupted views of the landscape.

At the Panama-Pacific International Exposition in 1915 the railroad companies went all in. They arrived at the convention with plans of their own. The original purpose of the expo was to celebrate the completion of the Panama Canal, but the railroad companies had a different idea; their goal was to force the government to take action on creating a centralized body to oversee, promote, and expand our national parks system.

Their lobbying efforts included huge displays showing off the parks that their passenger lines served. Union Pacific even built a mind-blowing 4-and-a-half acre replica of Yellowstone National Park, outfitted with working geysers! Apparently at least a couple of these massive exhibits cost the railroad companies over half-a-million dollars, each.

Their message was received loud and clear. The National Parks Service was established less than a year later, in 1916. 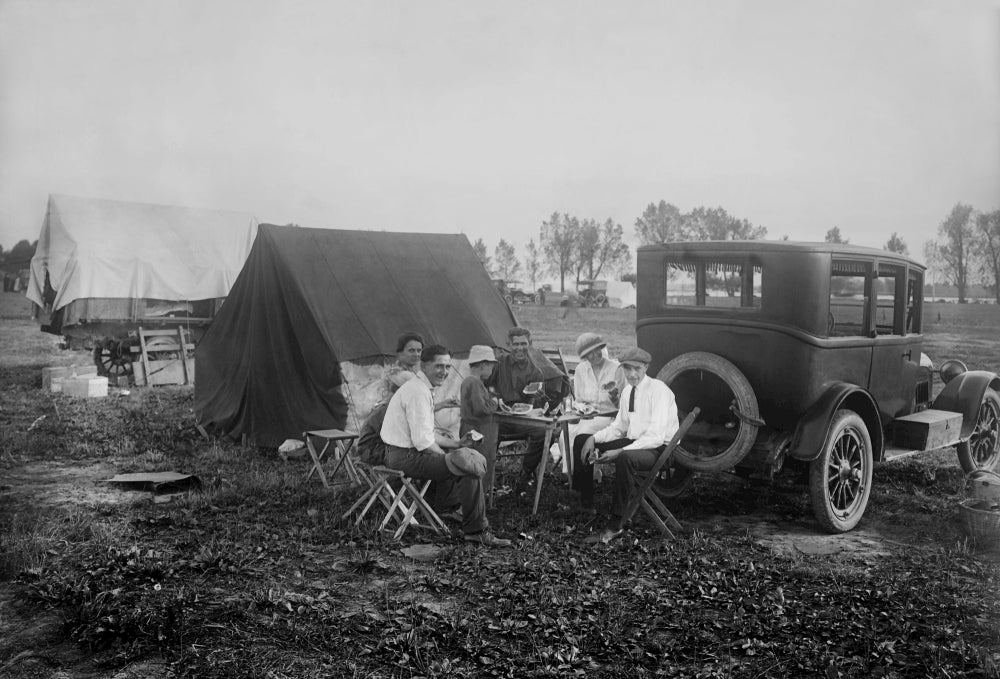 According to author, Terrance Young, the number of Americans that went camping in 1915 was about 300,000 in total. Then the roaring 20s came along and the American economy was booming like never before. The middle class was expanding and so was the amount of leisure time for workers. In 1930, just before the Great Depression slowed or halted the progress of most leisure activities, the number of American campers nationwide was in excess of 3,000,000.

The camping craze was officially here to stay.

Aside from the Great Depression and World War II, camping in America has consistently grown in popularity every year. Train travel, national parks, and the automobile took camping to new heights. Cars, specifically, had a huge impact on recreational camping. Stephen Mather, the first director of the National Park Service, said that the automobile “has been the open sesame” for camping and national parks into America’s mainstream.

It’s not hard to deduce why camping’s popularity continues to trend upward, even today. For one, with over 80% of the American population now living in urban areas, there’s a huge number of people that are increasingly ready to escape into nature for vacations and weekend retreats.

The most recent nationwide survey reports that a remarkable 62% of all American households (78.8 million in total) go camping at least once a year. That’s an increase of 1.4 million households from just one year ago. Additionally, for the first time in the survey’s history “the percentage of new campers from multicultural groups outpaced the percentage of new caucasian campers”. That is certainly a sign of good health for the camping industry in a country where the overall demographics are evolving in a very similar way.

The history of camping in America paves the way for a bright future.

In my opinion, it seems fitting that the history of camping in America had such humble beginnings. The off-beat and engaging writing of a minister captured the nation’s attention. It helped demystify a new pastime and open eyes to the joys of spending time in nature. Now, 150 years later, camping has solidified its standing as one of the most popular outdoor activities in America.

This article about the history of camping was brought to you by our friends at Midland Radio.

Check out their two-way radios before your next camping trip! 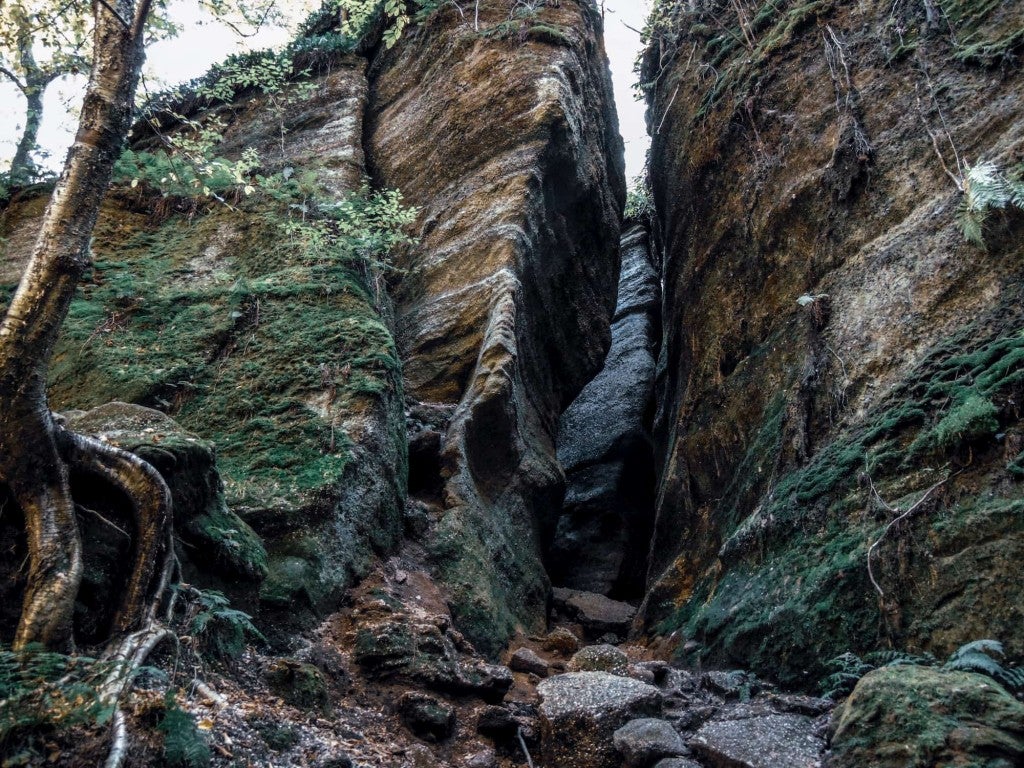 8 Overlooked Ohio State Parks to Camp With The Whole Family

This article was brought to you by Wenzel, whose fleece sleeping bag will keep your whole family feeling cozy on even the chilliest of autumn… 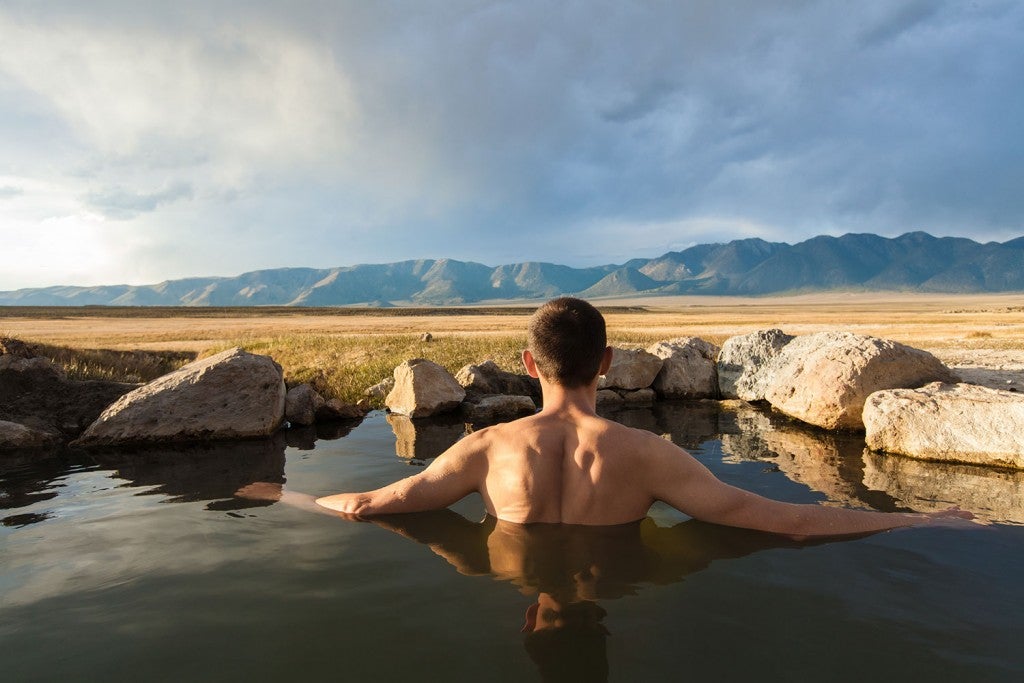 California Hot Springs: Where to Soak and Camp Across the State

These seven California hot springs all have camping on-site or nearby.  Forest bathing (shinrin-yoku) is all the rage, and ecotherapy has benefits for the body…