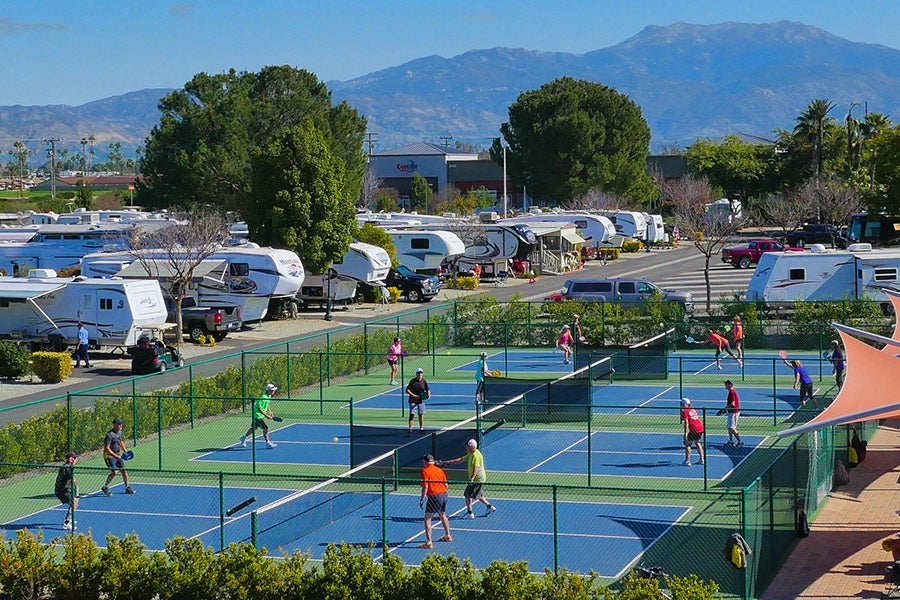 This article is brought to you by Liquid IV, which is the perfect addition to your pre- or post- workout routine. Get all the hydration you need after a pickleball session with Liquid IV’s convenient and effective electrolyte drink mix.

Pickleball was invented by a Washington State politician named Joel Pritchard in just one afternoon, during the summer of 1965. Two years later, he named the family dog “Pickles” in honor of his new sport.

More than 5 decades later, it’s now receiving headlines like “Pickleball: The fastest growing sport you’ve never heard of.” And the USA Pickleball Association (USAPA) is touting a 650% increase in pickleball players over just the past six years.

The game’s recent boom in popularity is thanks in large part to the RV community. It was at RV parks, as well as 55-and-over communities, that pickleball found it’s most loyal fanbase. The word spread from there, and now parks and recreation facilities are filled with people who play pickleball across the country.

The flexibility of pickleball as an indoor or outdoor game that can be played on converted tennis courts or badminton courts, makes it a great on-the-go sport. And with the right travel-ready equipment, you’ll know how to play pickleball wherever pavement is found.

How to Play Pickleball: The Rules 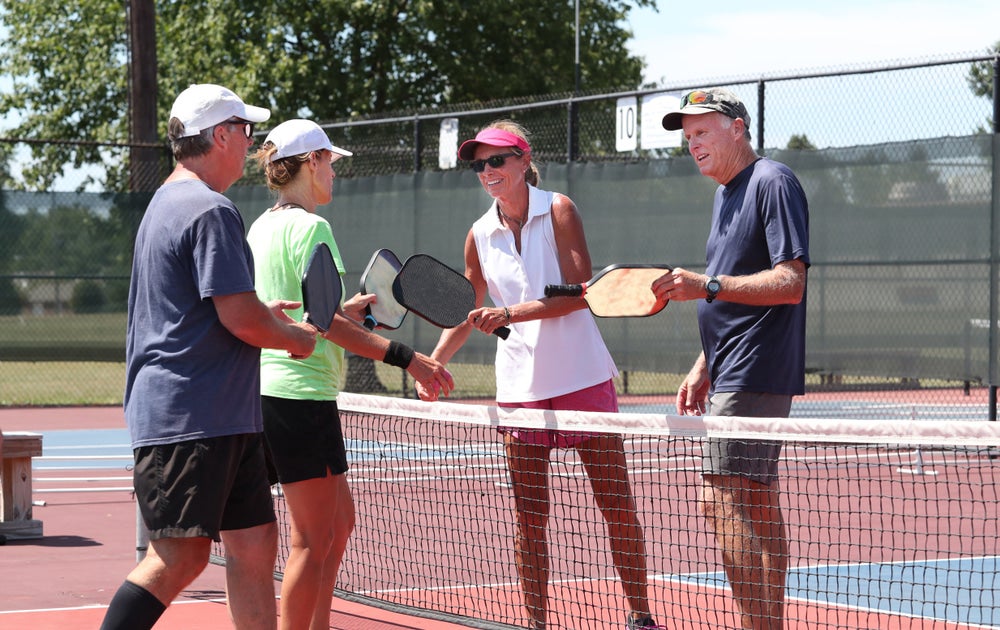 For those of you who haven’t played pickleball already, let’s start with a quick overview of the rules. Welcome to Pickleball 101:

How To Make Your Own Temporary Pickleball Court

There are two main material options for marking out your court: tape or chalk.

Tape will provide more durability, weather resistance, and precision. Chalk is the cheaper option and it makes your court easier to clean up. (Or just leave it for the rain to wash away.) A 20-pack of jumbo washable sidewalk chalk is just under $7 and is sure to easily last you a full year of makeshift pickleball excursions.

If you decide on tape for your court creation; we recommend using gaffer or duct tape. Both options will hold tight to rough and uneven surfaces. For the environmentally conscious folks, gaffer tape should leave behind less adhesive residue than duct tape.

A pro tip to take your temporary outdoor court to the next level is to use one color for all the outermost boundary lines, a second color to divide the court down the middle, and a third color to designate the no-volley zone.

For my fellow visual learners out there, click here to watch a 3-minute video tutorial that does a great job of showing the whole measuring and marking process from start to finish.

You should also refer to the diagram & court dimensions below to make sure you have everything nailed down before you start any taping or chalking. 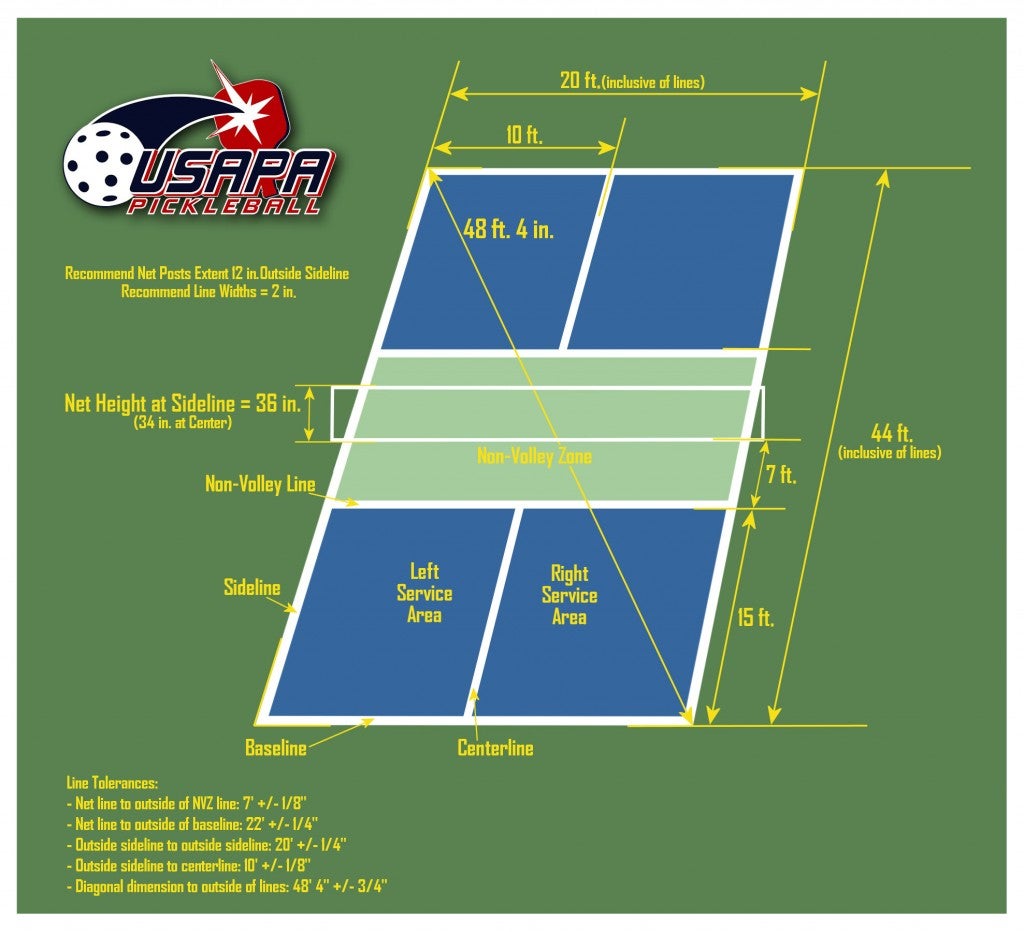 This diagram gives you a more detailed look at the official pickleball court measurements. (FYI—other than the non-volley zone, a pickleball court has the exact same dimensions as a badminton court.)

Now that you’ve completed your full-size, envy-inducing outdoor pickleball court, let’s make sure you have everything else you’ll need to host your first pickleball tournament of champions.

The list is short and sweet: a net, a few paddles, and some pickleballs.

Here’s what we recommend for a compact, travel-ready set of paddles and balls:

And don’t overlook the importance of a good net. You’ll want one that is regulation size to go with your full-sized court. We found this high-quality portable pickleball net; complete with a solid metal frame, four ground stakes for added stability, and a carrying bag for easy packing.

Let’s put it all together now.

This article was brought to you by Liquid IV

Check out their line of electrolyte-packed hydration drinks!

9 Stunning Backpacking Trips in the U.S. You Should Know About

This article on the best backpacking trips in the U.S. is brought to you by Gregory, the makers of hiking backpacks that are tough enough… 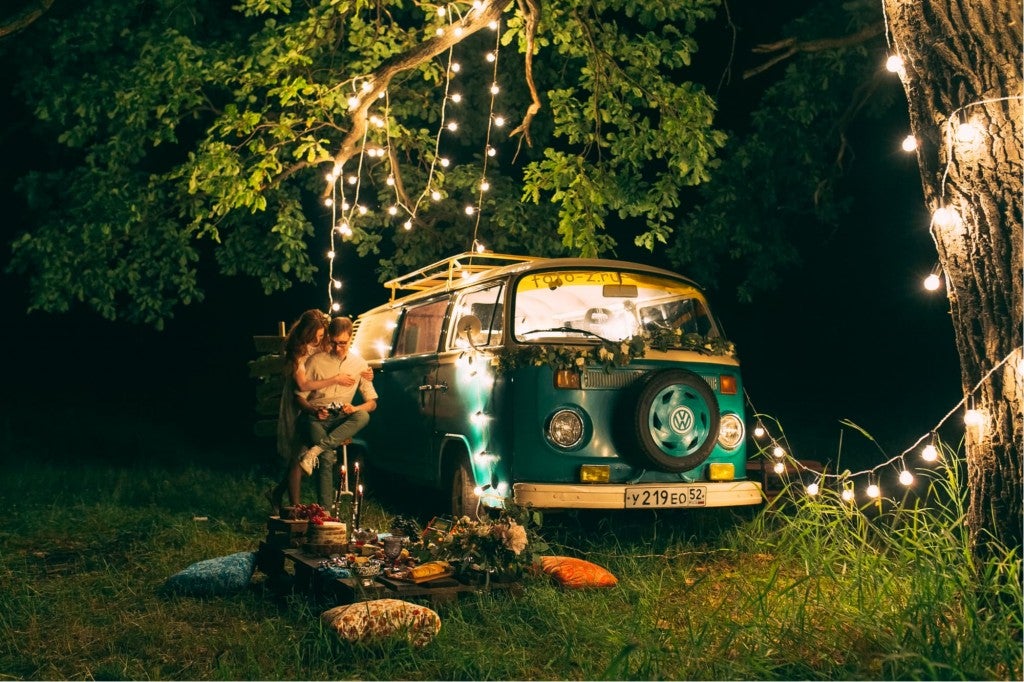 If you’re anything like me, you’ve spent an evening or two tumbling down the rabbit hole of #vanlife photos, campervan conversion ideas, and vintage canned…