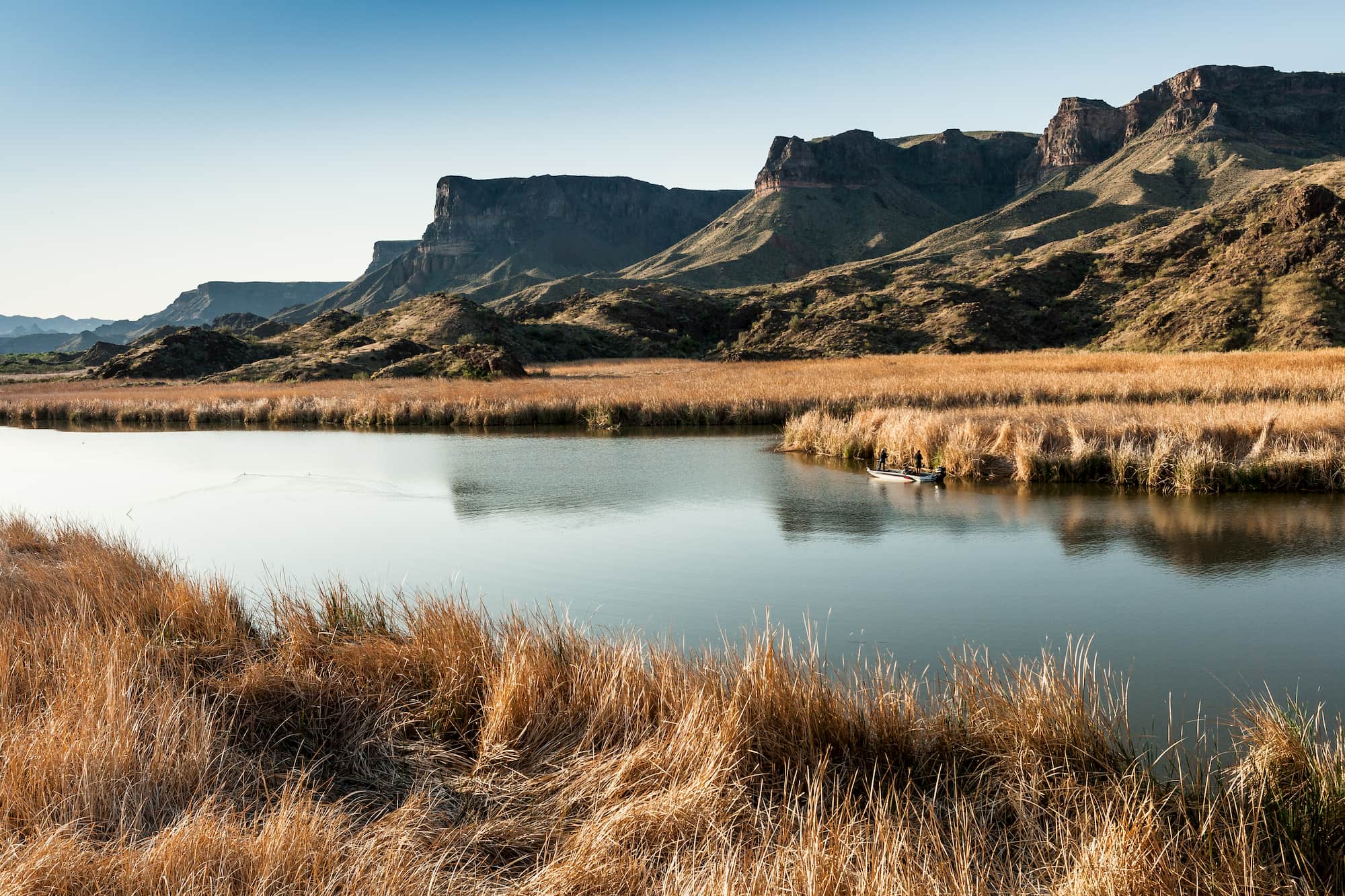 Formed by the damming of the Colorado River on the Arizona-California border, Lake Havasu is a 45-mile-long reservoir with over 400 miles of stunning desert shoreline. Opportunities for outdoor water sports fun abound at Lake Havasu; whether you want to cool off at a private beach only accessible by boat, or hike through a narrow slot canyon to the water’s edge.

Lake Havasu City, the lakeside town that arose from the construction of Parker Dam, is 150 miles south of Las Vegas and about 195 miles northwest of Phoenix in a remote part of the Mojave Desert. Due to its remote location, much of Lake Havasu is inaccessible except by boat.

Havasu means “blue-green water” in the Mojave language and prior to the dam’s construction, the area was home to the Mojave people. Lake Havasu is often confused with Havasu Falls. Both are gorgeous desert oases, but the trailhead for Havasu Falls is actually a 3.5-hour drive from Lake Havasu City.

When To Visit Lake Havasu

Summers are hot and dry on Lake Havasu and it is not uncommon for temperatures to spike above 120°F in July. Winters are mild and temperatures rarely dip below freezing, making Lake Havasu an ideal wintering spot for retirees. March through September is prime boating season, but expect crowded beaches and a party-like atmosphere during spring break. Visit February through April or October and November for the best weather.

Things to See and Do at Lake Havasu 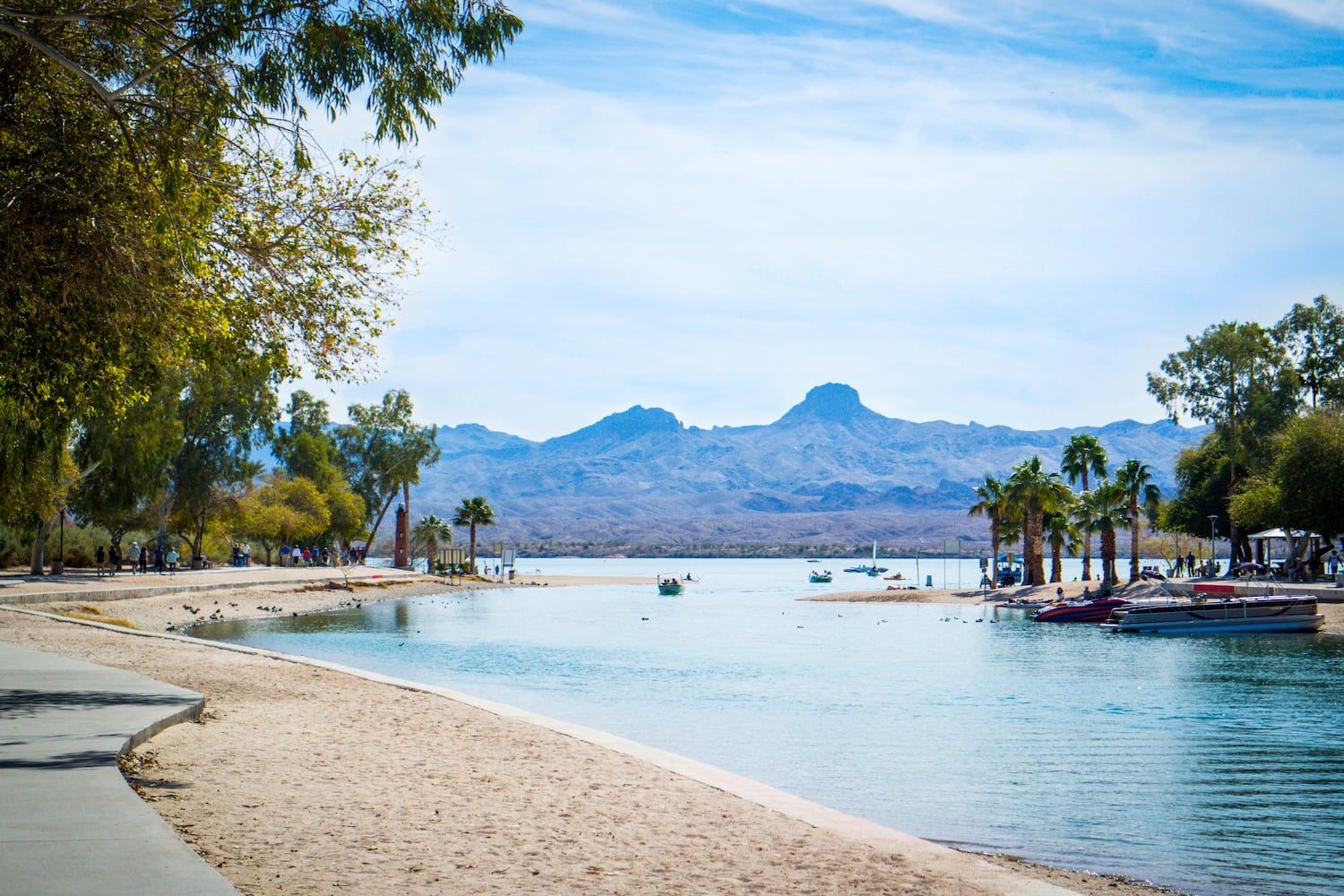 The Lake Havasu area has a huge variety of hiking trails for all abilities to explore. Many of the trails wind along the shoreline of Lake Havasu and provide sweeping vistas of the lake. The Crack in the Mountain Trail is one of the area’s most popular moderate hikes and travels through a narrow slot canyon to reach the shore of the lake.

With abundant largemouth and smallmouth bass, bluegill, redear sunfish, and more, Lake Havasu is one of the best fishing spots in Arizona, if not the entire southwest. Fishing is popular on Lake Havasu year-round and the lake hosts several premiere bass tournaments throughout the year. 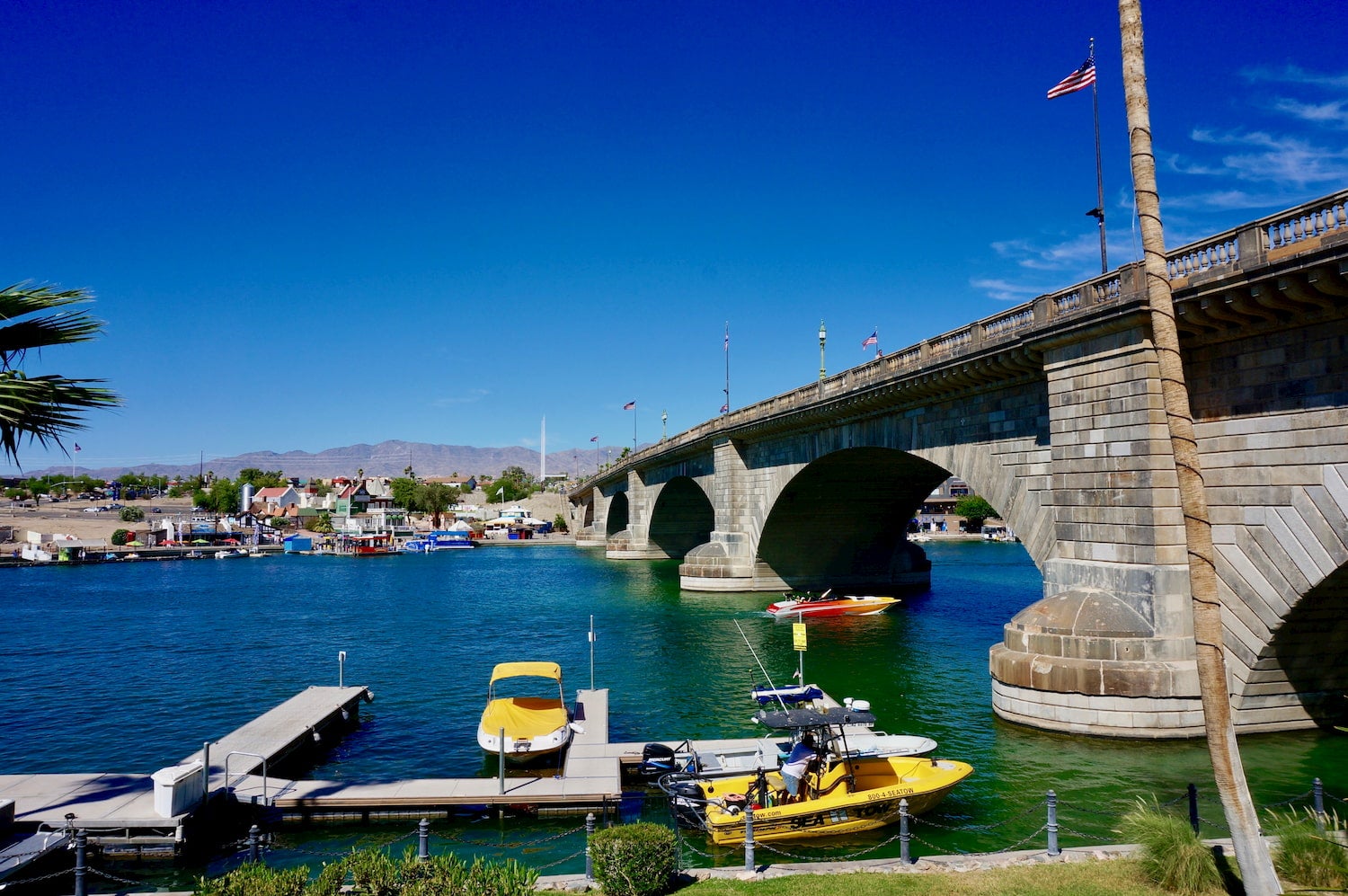 Given its vastness, boating is the best way to explore the lake’s hidden coves and secluded beaches. Some of the best beaches are only accessible by boat and several boat-in only campsites offer a wonderful alternative to private Lake Havasu camping resorts. Houseboats are an especially fun way to experience the lake if you’re traveling with a large group, and rentals are available at several lakeside marinas.

After standing over the River Thames in London for over 100 years, the London Bridge was dismantled and brought to Lake Havasu where it was put back together brick by brick. Rather than demolish the 1830s bridge, the city of London auctioned it off to the highest bidder and the founder of Lake Havasu City, Robert P. McCullough, saw this as a once in a lifetime opportunity. Today, visitors can take a stroll along the historic London Bridge and the replica English Village that arose next to the bridge.

Long before Lake Havasu existed, the Chemehuevi and Mohave people thrived in this harsh desert climate. At the Lake Havasu Museum of History in Lake Havasu City, learn about Havasu’s first people as well as the significance of the Colorado River and the building of Parker Dam. Interactive exhibits make this a great activity for kids.

Where to Camp at Lake Havasu 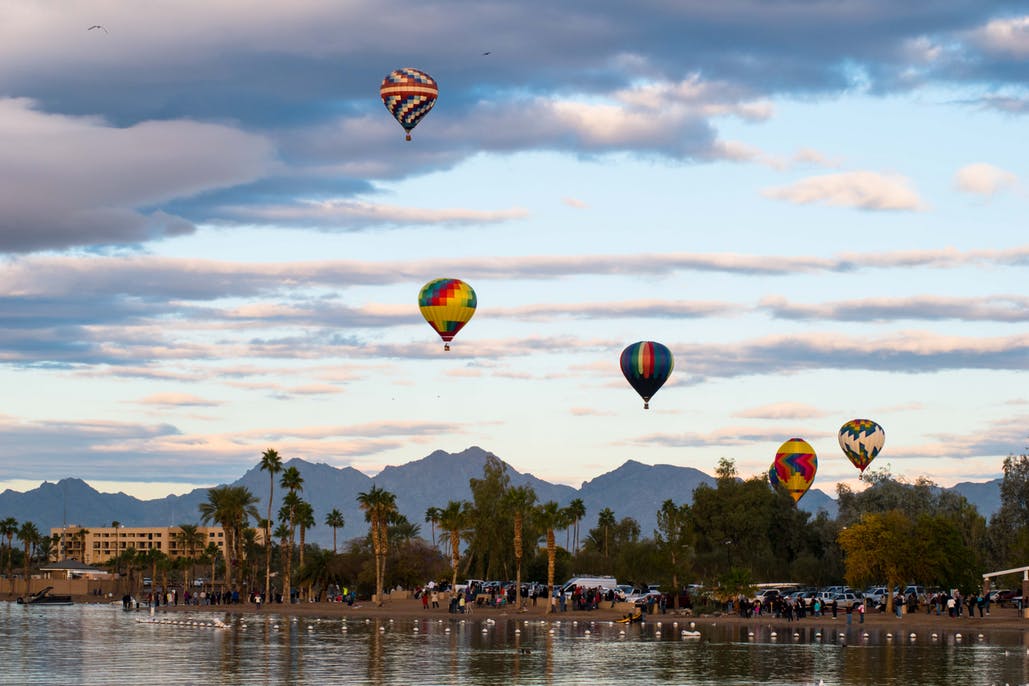 Located on the shores of Lake Havasu, and within walking distance of the London Bridge, Lake Havasu State Park is certainly one of the most popular Lake Havasu camping options available. The park offers 47 campsites with water and electric hookups, plus other amenities such as showers, a beach, and several boat launch areas. The park’s Arroyo-Camino Interpretive Garden showcases a variety of desert life, and the Mohave Sunset Trail winds along the shoreline.

Cattail Cove State Park is located on the eastern shore of Lake Havasu, 15 miles south of Lake Havasu City. The campground offers 61 campsites as well as 32 primitive boat-in only sites. Campsites can be booked ahead of time online, but boat-in campsites are only available on a first-come, first-served basis. 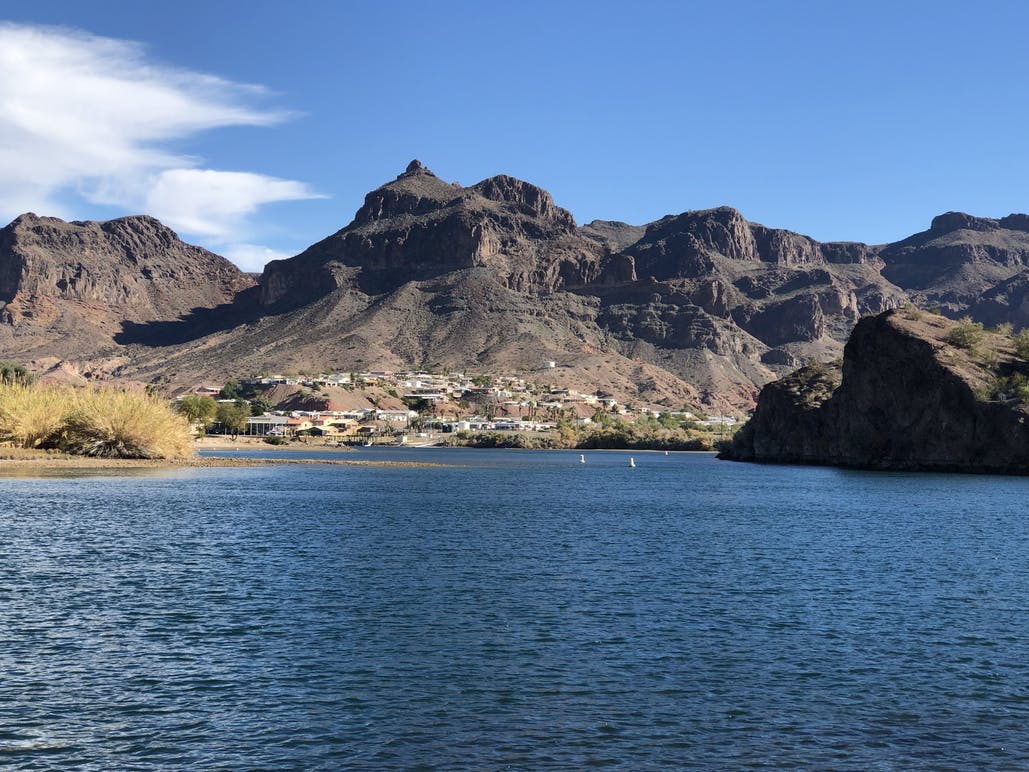 River Island is one of the best Lake Havasu camping options for tent campers. Eight beachfront campsites are available and can be reserved in advance online. The campground has 29 other sites ideal for RVs, complete with water and electric hookups. The park’s beach is tucked away in a cove protected from the Colorado’s current, and the park’s trails connect to the extensive network of trails in Buckskin State Park.

If you’re looking for a camp spot away from the bustle of Lake Havasu, but still want to be on the water, Arizona’s Alamo State Park might be one of the state’s best kept secrets. Cacti dot the wild desert landscape, and it’s common for bald eagles, great blue herons, coyotes, and wild burros to be drawn to this desert oasis. The park campground offers primitive tent sites, RV sites with full hookups, and four lakeside cabins.

Hualapai Mountain Park is located northeast of Lake Havasu, just outside of Kingman. The park’s elevation ranges from 5,000 to over 8,000 feet making this an excellent spot for escaping the scorching summer heat in Lake Havasu. The park offers a wide variety of lodging options including cabin rentals, primitive tent camping, and full-service RV camping, plus
a large network of hiking trails and an 18-hole disc golf course. 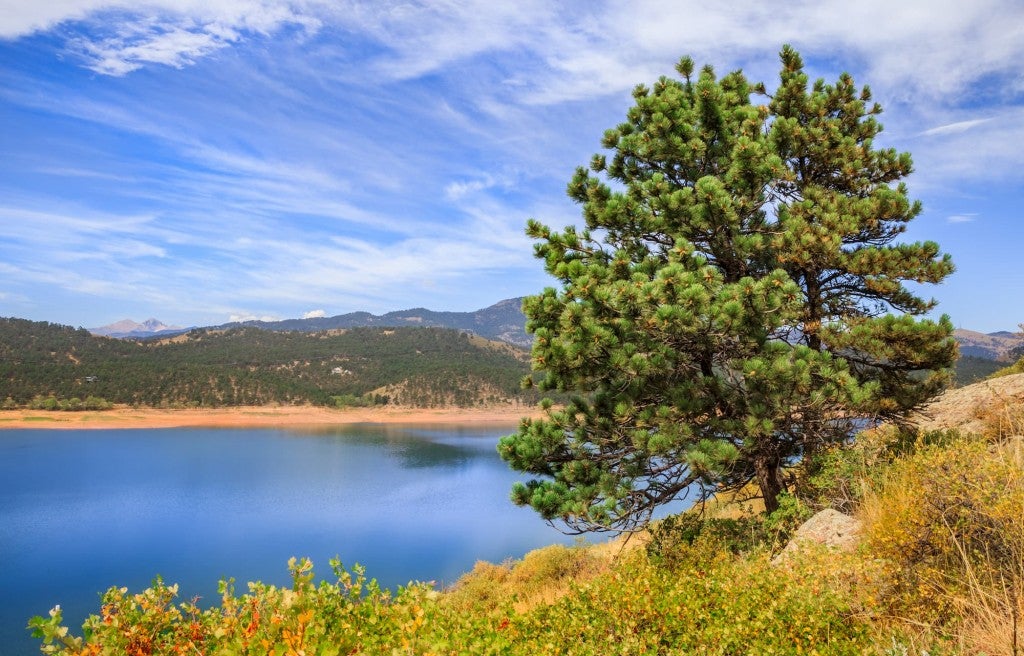 Located northwest of Denver in the foothills of Loveland, Carter Lake is a 1,100-acre reservoir surrounded by public lands. The Carter Lake Dam was completed… 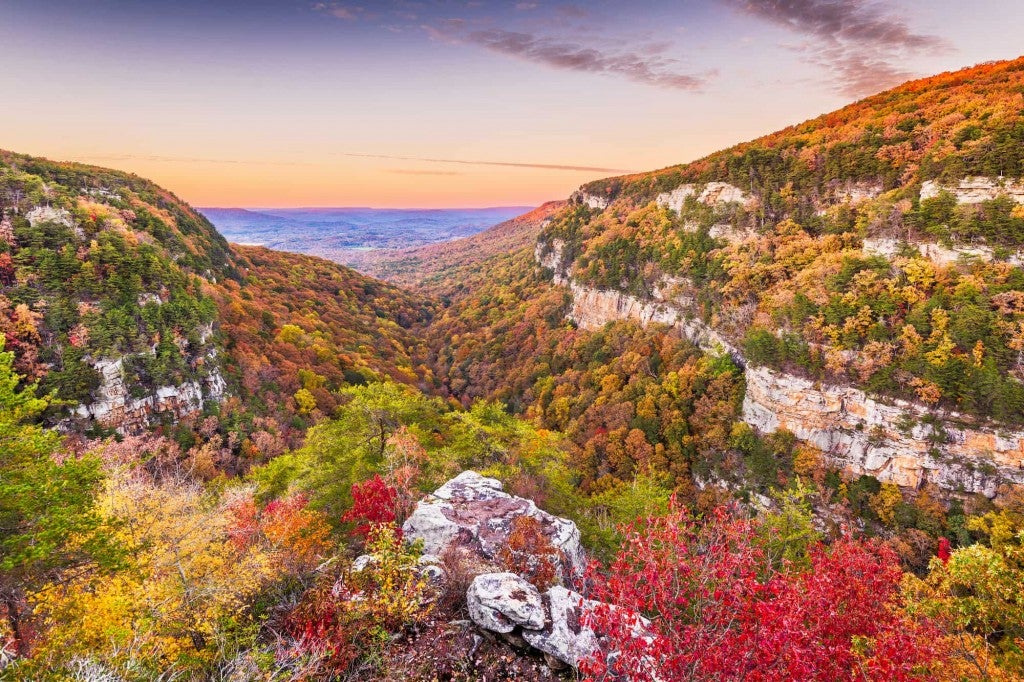 The state park system in Georgia was founded in 1931, with Indian Springs State Park and Vogel State Park being the first state parks established…