Where to Go Yurt Camping Throughout the Country 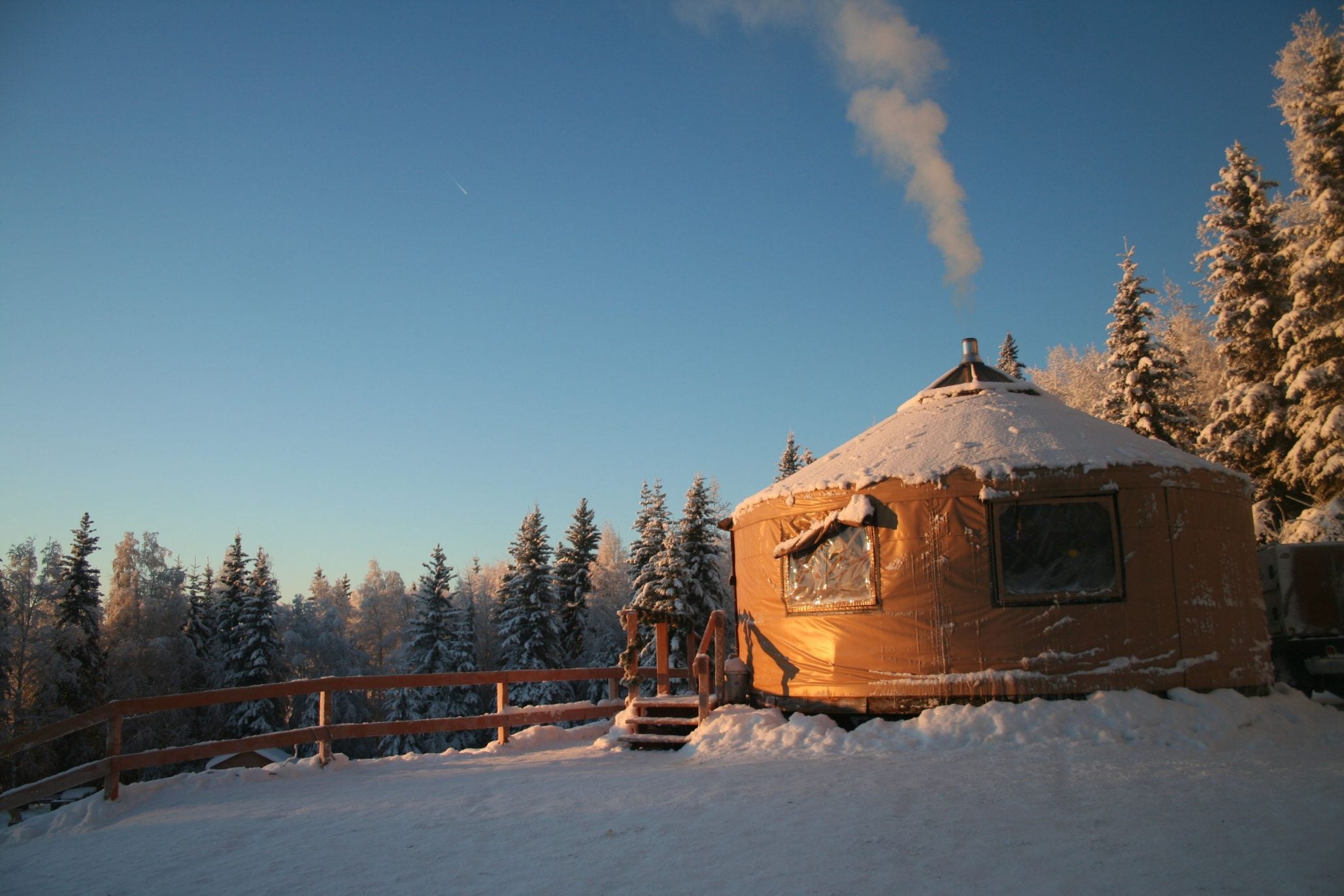 This guide to yurt camping was brought to you by our friends at Ethnotek. They make wanderlust-worthy gear like 30 liter backpacks and travel daypacks that are not only super functional, but also help tell the story of cultures around the world by preserving ancient textile traditions.

From the Mongolian Steppes to American State Parks, yurts have made quite the global journey. The dome-shaped tents originated as a warm and sturdy yet mobile form of housing for nomadic tribes living on the plains of Central Asia.

At its simplest, a yurt is a circular, flexible wooden frame covered in layers of felted wool, with a stove at the center for heat. The Mongolian word for yurt is “ger,” which simply means “home.”

Yurts first arrived in the United States in the 1960’s, and the timing was right. Americans were curious about all things Eastern thanks to the rise of backpacking and counterculture, and the outdoor industry was beginning to boom. Since then, yurt rentals have remained popular alternatives to cabins at many privately-run campgrounds, ski resorts, and state parks.

Not only are yurts cozy and novel, but yurt camping really reduces the amount of gear you have to pack. You can leave the tarps and sleeping bags at home and fit everything you need into one 30 liter backpack. No need to skimp on all your creature comforts when you’re sleeping in a roomy yurt.

Interested in exploring more history of the yurts while camping across the U.S.? Here are some of the camping destinations that made yurts a popular camping option: 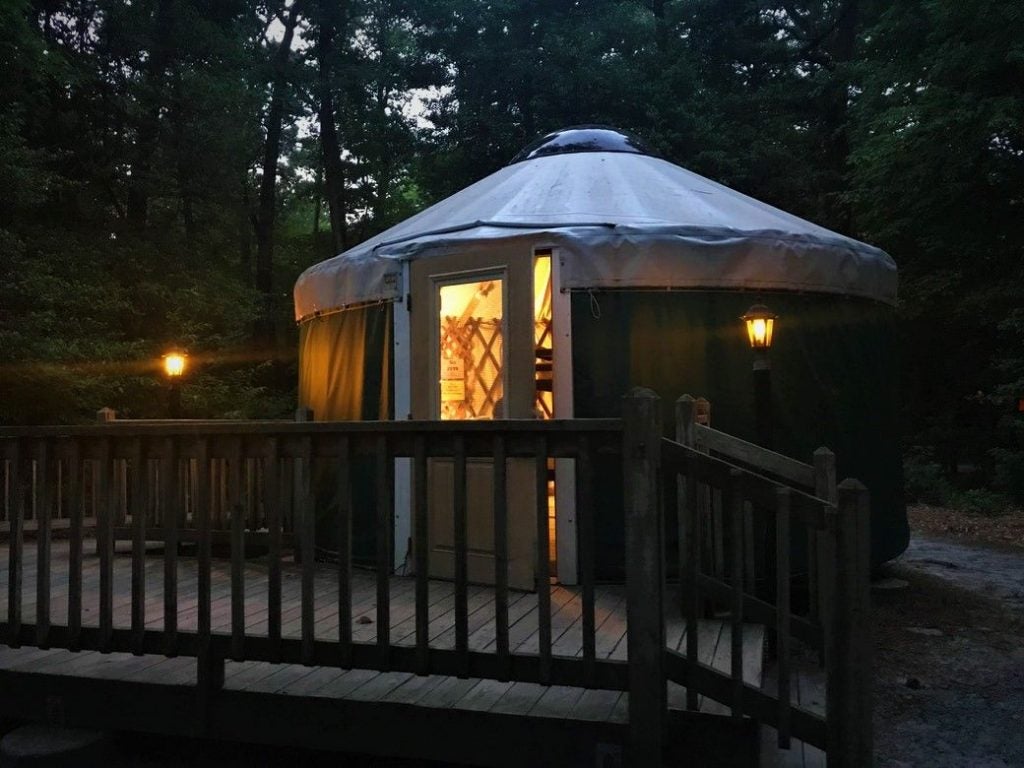 Did you know that in the U.S., yurts first caught on in New England, rather than on the west coast? Americans discovered the yurt when Supreme Court Justice William O. Douglas made a visit to Mongolia in the early 1960s. Harvard graduate student Bill Coperthwaite saw a National Geographic article on Justice Douglas’ visit and was inspired to develop his own version of the yurt for a U.S. market.

Check out yurt camping at Trap Pond State Park in Delaware. You can see for yourself how Coperthwaite’s love of yurts spread throughout the region, and how handy it is to be in a giant tent when the bugs are biting in summertime. Trap Pond State Park’s offers a borrow-a-bike program and all the opportunities for water sports, including pontoon boat tours.

“[The yurts] fit up to 5 people and are air-conditioned, but you’ll need your own sheets, pillow, and blankets! The campground was well kept with some trails, views of the pond all around, a small playground, several bath houses, and an activity spot with cornhole and ladder ball set up.” — The Dyrt camper Fransheska A. 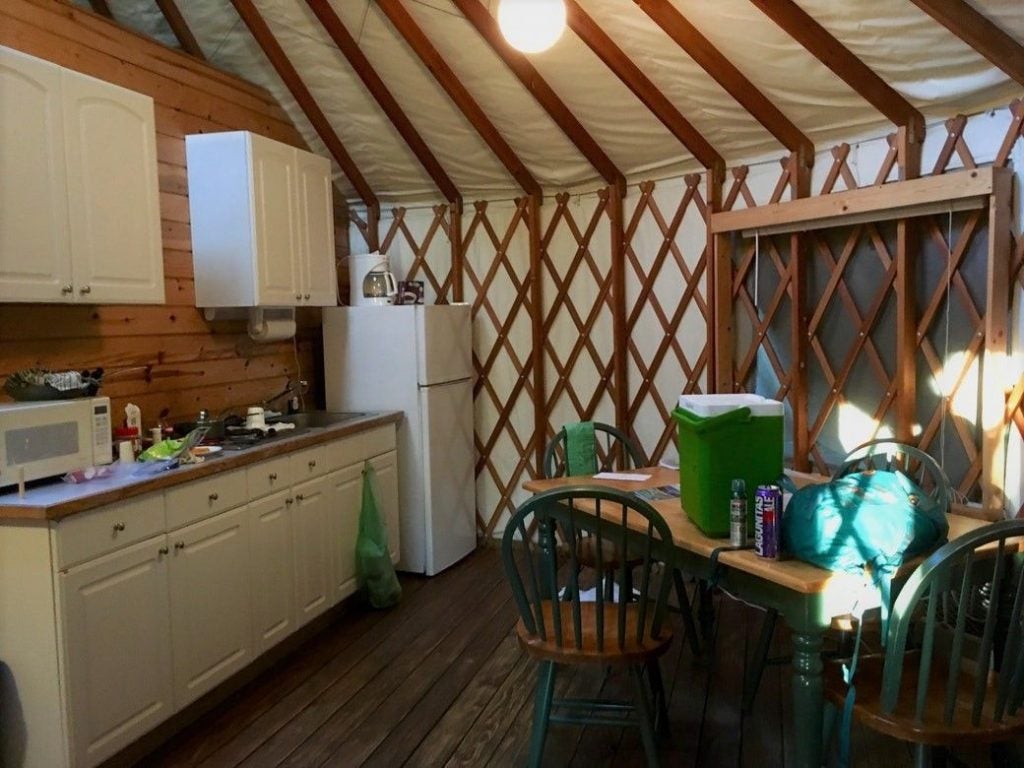 When Coperthwaite graduated from student to professor, he continued tinkering with yurts and used them as a teaching project for his students. One of Coperthwaite’s mentees eventually founded his own yurt company in California, introducing the West Coast to modern American yurts.

Ten minutes from the Yosemite National Park Big Oak Flat entrance and about an hour from iconic destinations like Half Dome is the Yosemite Lakes RV Resort, which offer yurt camping. If you’re more about glamping than dirtbag camping, you’ll appreciate all the family-friendly extras.

“[The kids] enjoyed playing in the river, where there is a spot deep enough to jump off a rock. Hammocks and hammock stands were nearby. Mini golf and lawn Jenga were also a hit.” — The Dyrt camper Leslie M. 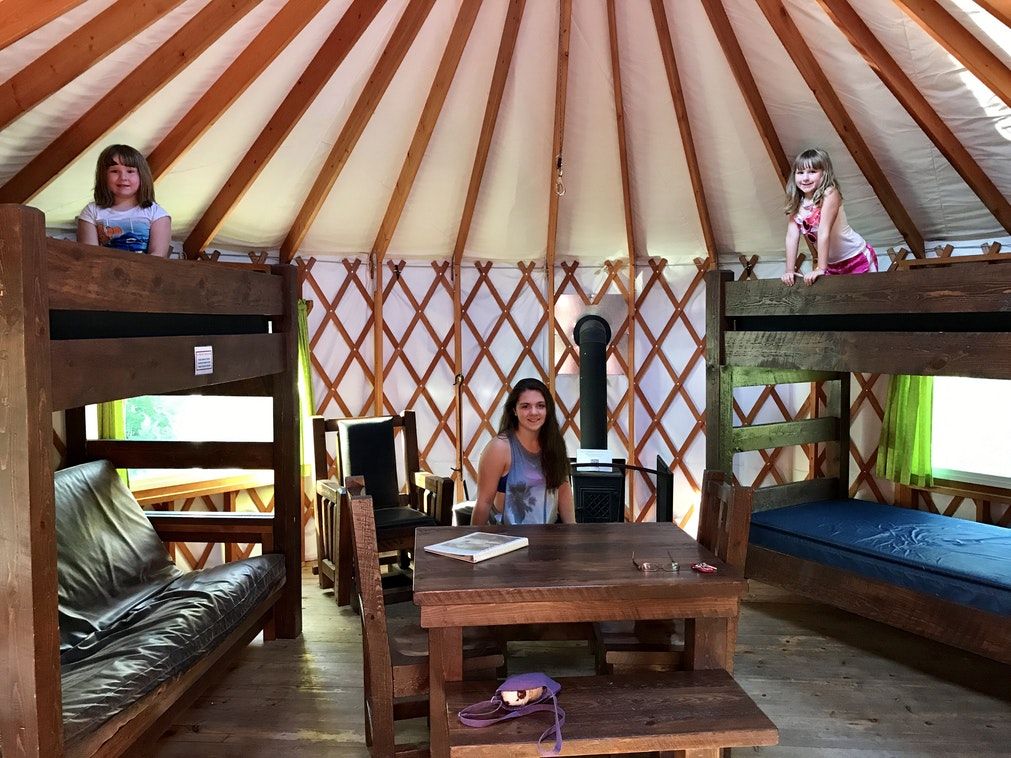 By the early 1980s, yurts made their way into the Midwest thanks to enthusiasts like Barbara and Ted Young, who blended their love of skiing and yurt glamping along Minnesota’s famous Gunflint Trail in their company Boundary Country Trekking. You can still camp in their pioneering yurts at Poplar Creek, not far from Grand Marais, Minnesota and just off a motor-free Boundary Waters Canoe Area Wilderness.

Each yurt comes with a wood-fired cookstove, all the dishes and kitchen items you need, bunk beds, and a complimentary canoe. Dogs are welcome for an extra $20 a night, and you can arrange for one of their yurt-to-yurt packages.

That includes one night at each of their yurt locations along the BWCA’s longest tracked ski trail, as well as a shuttle to carry you and your gear back on the tail end. You can travel by ski, fat bike, mountain bike, or on foot depending on the weather. Boundary Country Trekking also offers guided bird watching and canoe expeditions and other outdoor activities. 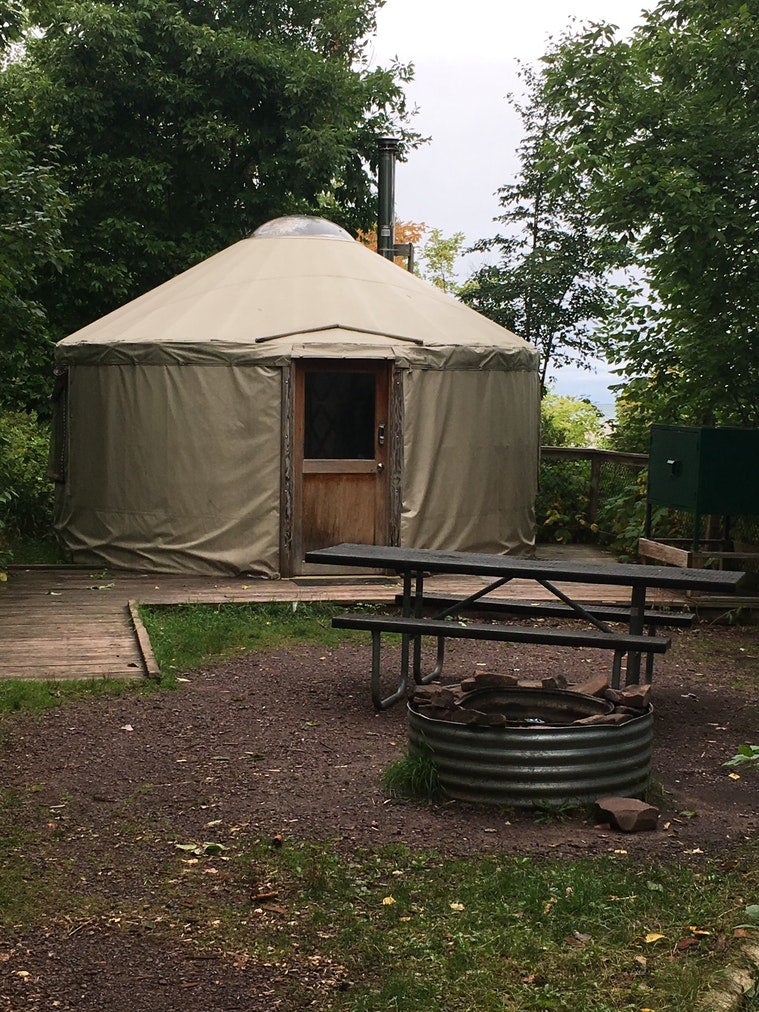 Camping in a Yurt on Lake Superior at Union Bay Image Courtesy of The Dyrt Camper Kathy H.

Minnesota isn’t the only state that caught on to the yurt’s multi-season potential. At Union Bay in Porcupine Mountains State Park, you can enjoy views of Lake Superior from your own yurt even in the winter after the park’s other campsites shut down. They even have special parking and safety information to help you navigate your stay during the snowy months. The Dyrt camper Andrea G. has been back twice now.

The yurt is about a mile from the parking lot, and you should be prepared to carry your things—especially in the winter when you can’t pull your car in all the way. The Dyrt campers warn that it can get very muddy when it rains. Still, it’s hard to find a campground with a better combination of amenities, access to the Porkies (as the locals affectionately call the nearby mountains), and views of Lake Superior.

“The views of Superior are amazing and just below the yurt you have access to the shoreline which is great to watch the sunsets on. Porcupine Mountain offers many trails, many of them longer backcountry trails, and some easier ones as well. It is a great park that I always love coming to!” — The Dyrt camper Andrea G. 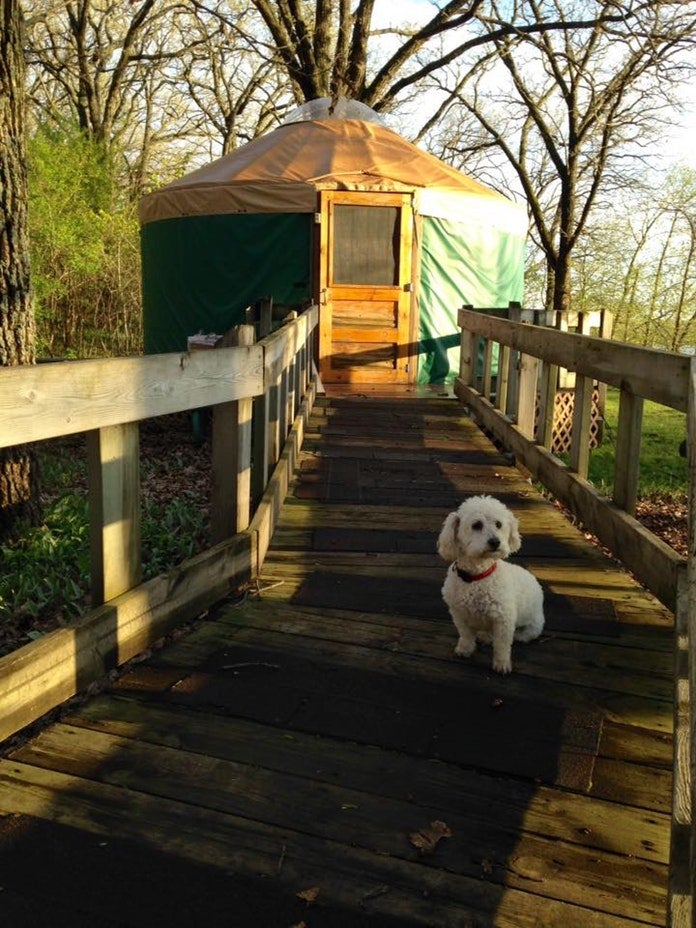 If you love fishing, you’ll love camping at Mcintosh Wood State Park. The yurts come with bunk beds, a futon, tables and chairs, as well as a picnic table and grill outside. If you don’t have any luck getting the fish to bite, walk around the lip of Clear Lake to Muskie Lounge, a no-frills joint with classic midwestern comfort food like cheese curds.

If you don’t mind walking a little further, you can get ice cream at The Viking or beer and BBQ at Gunny’s Smokehouse.

“There is a large station for cleaning fish and a huge picnic area with wide open space and a nice playground. There is a beach for swimming but there is no lifeguard on duty. There is also a boat ramp and a few docks for launching.” — The Dyrt camper Matt S. 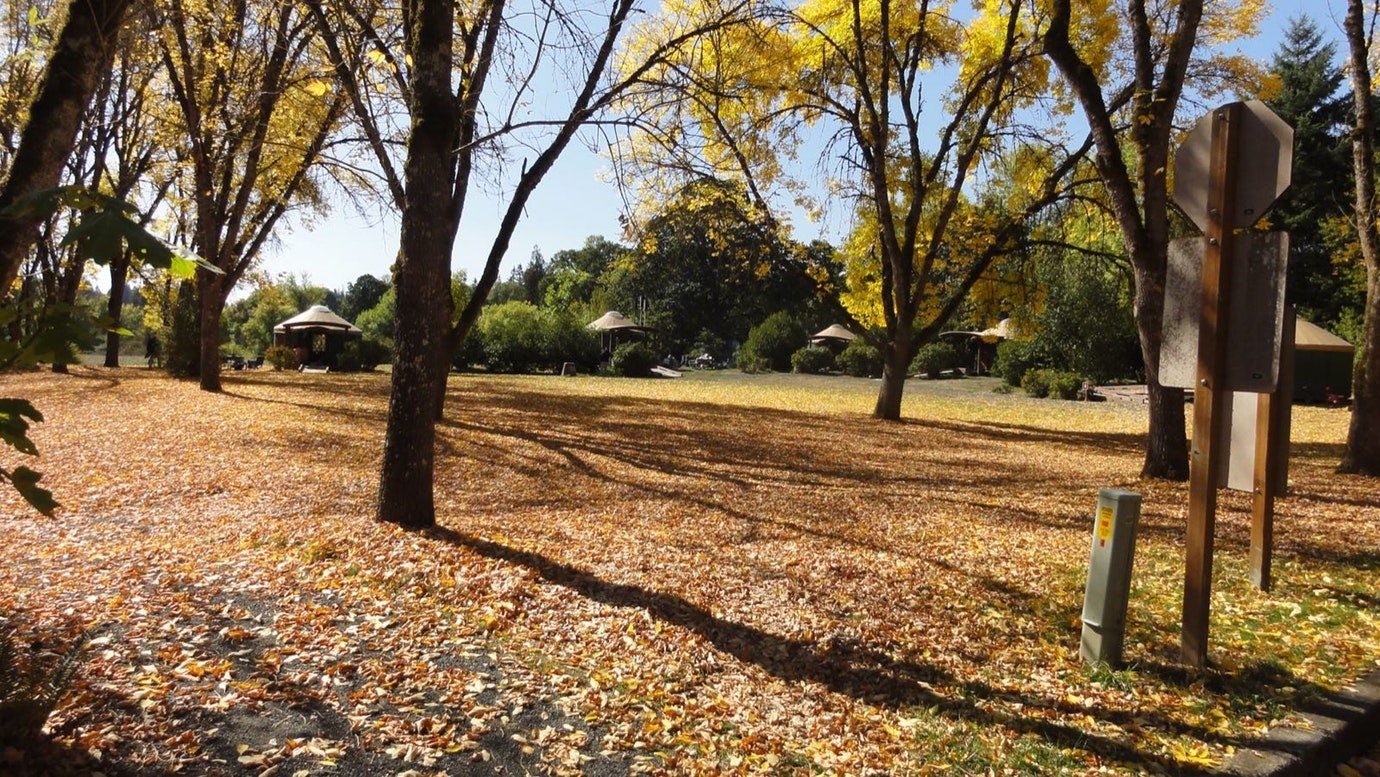 Some of Coperthwaite’s friends and students went on to spread yurts to California and the Pacific Northwest; they really took off in Oregon, which fully embraced yurts in the 1990’s at state parks like Champoeg.

A man named Craig Tutor, then the Oregon State Parks Northwest Regional Manager, saw the potential for yurts not only as an affordable way to increase capacity at Oregon’s 200+ state parks, but also as an appealing introductory lodging for families, first-time campers, and out-of-state visitors. They were such a success that other State Park systems went on to follow suite.

“The yurts are heated, and a couple of them are pet-friendly, which is great for us! There is a small table in each yurt. There’s a couch and a bunk bed for sleeping arrangements, with the lower bunk larger than the top bunk.

There are great walking trails and day use areas, and our favorite thing about this place is biking on the biking trails surrounding the area. Beautiful and close to civilization for a quick and low key camping trip. Great for beginner campers and families!” — The Dyrt camper Lana N. 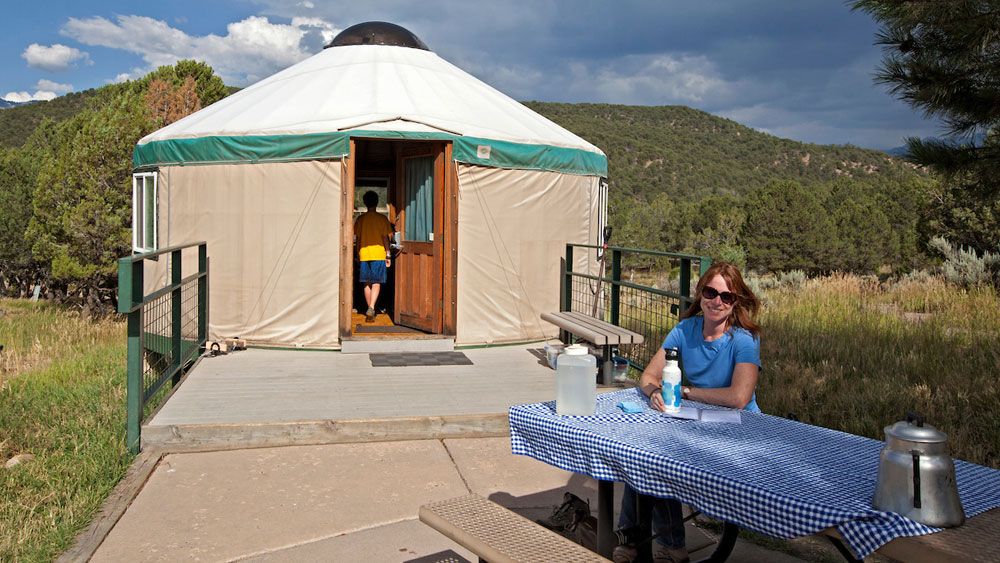 From the yurt’s East Coast origins to its success on the West Coast and in the northern midwest, it eventually reached the rest of the American west. Given how much Colorado already loves its ski huts, it’s not surprising that yurts fit right in. These semi-permeant tents were a natural addition to landscapes like what you’ll find at Ridgeway State Park, Colorado, the westernmost state park in all of Colorado.

If you get lucky, you might just catch some of the smallmouth bass, rainbow trout, brown trout, splake trout, kokanee salmon, green sunfish and yellow perch swimming in the area. The Dyrt campers have commented on how easily accessible the fly fishing is from this campground.

“In addition to plenty of tent and RV sites, Ridgeway SP also has three heated and furnished camping yurts for those seeking an enhanced comfort level. Each unit includes a fridge, futon type beds, dinner table and chairs.” — The Dyrt camper Russ M. 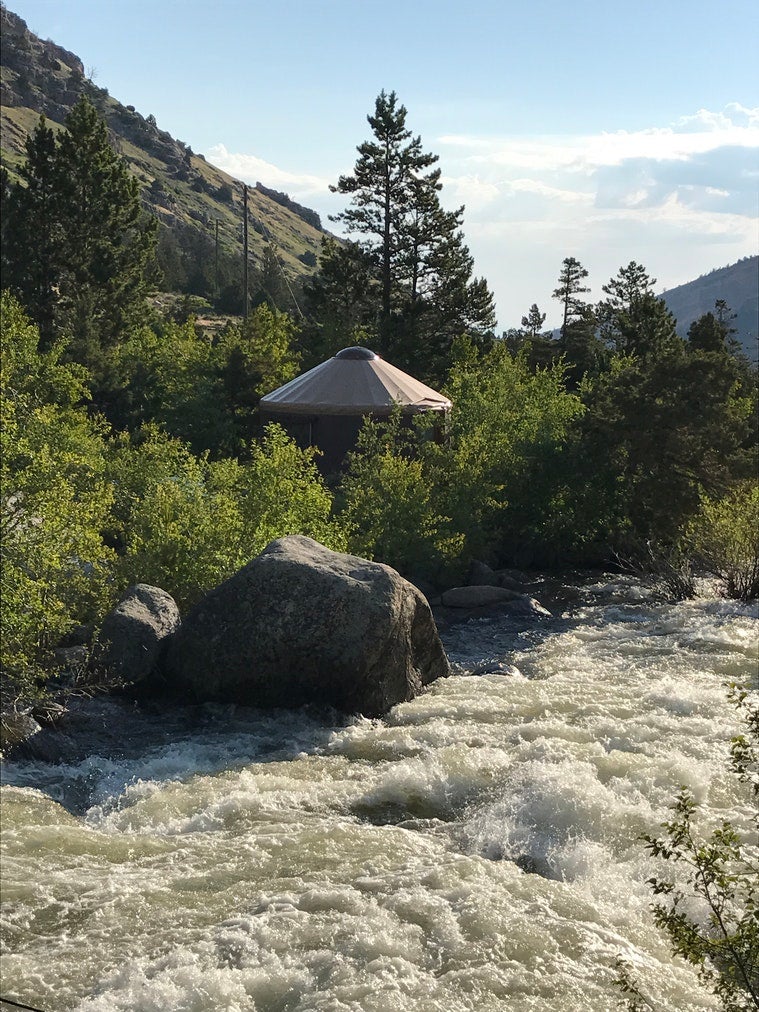 Camp in a Yurt on the Popo Agie River Image Courtesy of The Dyrt Camper Carrie C.

The Dyrt camper Art S. discovered Popo Agie Campground when he was trying to find a place to hike and camp with his dog outside of Yellowstone, where pets aren’t allowed. He chose this of a few options within Sinks Canyon State Park and found a friendly camp host, an exciting swing bridge over a babbling brook, and plenty of comfortable camping options, including yurts.

“This campground is very clean and in a beautiful setting with big limestone cliffs on one side and the Popo Agie river and forests on the other. The Sinks of the Popo Agie isn’t far from camp, about a mile and the Visitors Center is located there.

The rise is about another half mile away and has the biggest trout I’ve ever seen! The climbing in the area is spectacular! There are hiking trails galore in the state park and in the Shoshone National Forest.” — The Dyrt camper Carrie C.

Another review writes of a strange natural phenomenon you aren’t likely to see many other places: there’s a spot where the river disappears!

“It sinks into the ground and then reappears a quarter mile down the mountain. Dye tests show it takes 2 hours to go the distance – leaving speculation as to what happens in between.” — The Dyrt Camper Art S.

What the Youngs discovered to be true of camping yurts in Minnesota is equally true in the magnificent mountains of Utah. That is, it’s marvelous enough to ski in to a cozy winter cabin, but skiing into a winter yurt adds additional excitement. Especially when you’ve got a yurt that is beautifully situated in the Ashley National Forest and comes packed with plenty of extras.

“The yurt itself has a nice outside deck, two double bunk beds, wood stove, cook stove and some pans and utensils. People leave cleaning supplies and overall the yurt was pretty clean. The view is outstanding.” — The Dyrt camper Tammy H. 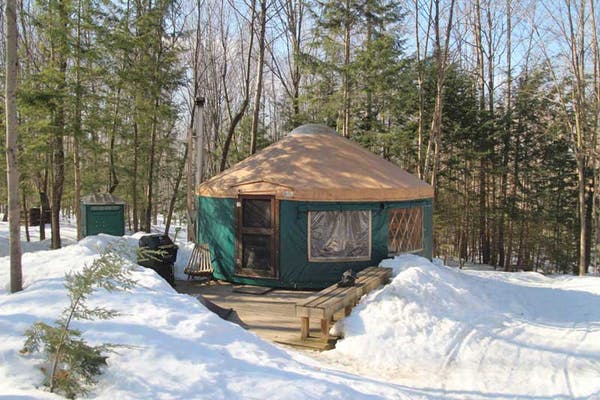 With beautiful views the White Mountains, Frost Mountain Yurts is a great place to getaway any time of year. There are 4 yurts in total, but they are spaced in such a way that campers still have an excluded experience. Each yurt features 3 sets of bunkbeds, 2 pull out couches, a hammock, cards, games and a full kitchen. 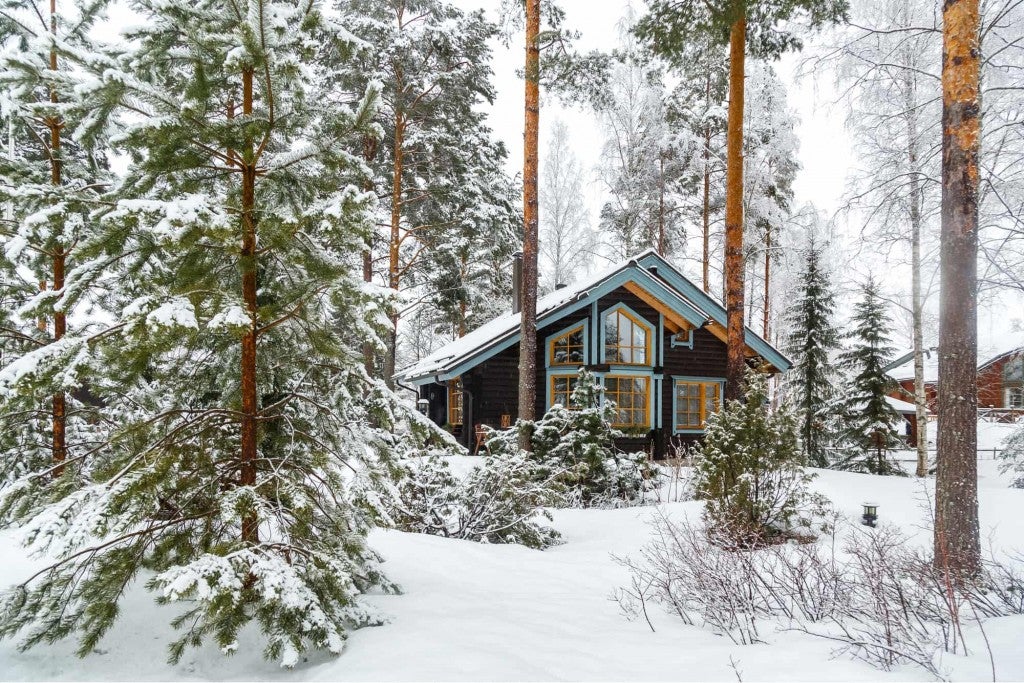 Winter isn’t traditionally the time that campers flock to the great outdoors–especially for Ohioans. With high average winds and temperatures consistently dropping 20 or below,… 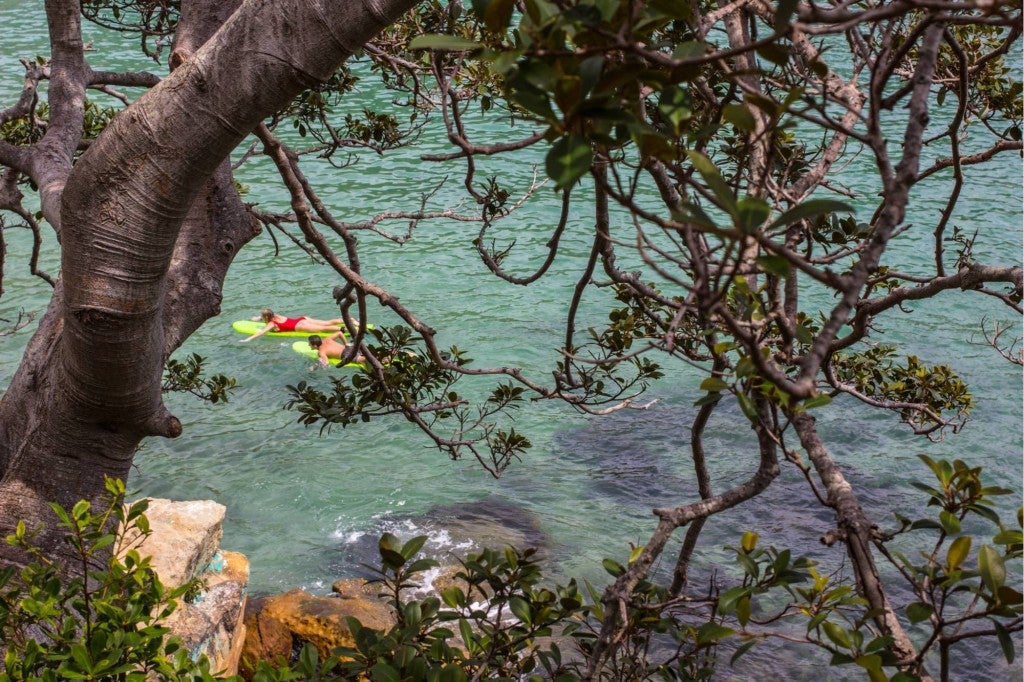 Everything You Need to Know to go San Marcos River Tubing

This article was brought to you by IceMule, the makers of beer backpacks that are waterproof, floatable, and designed with rivers, beaches, and all manner…