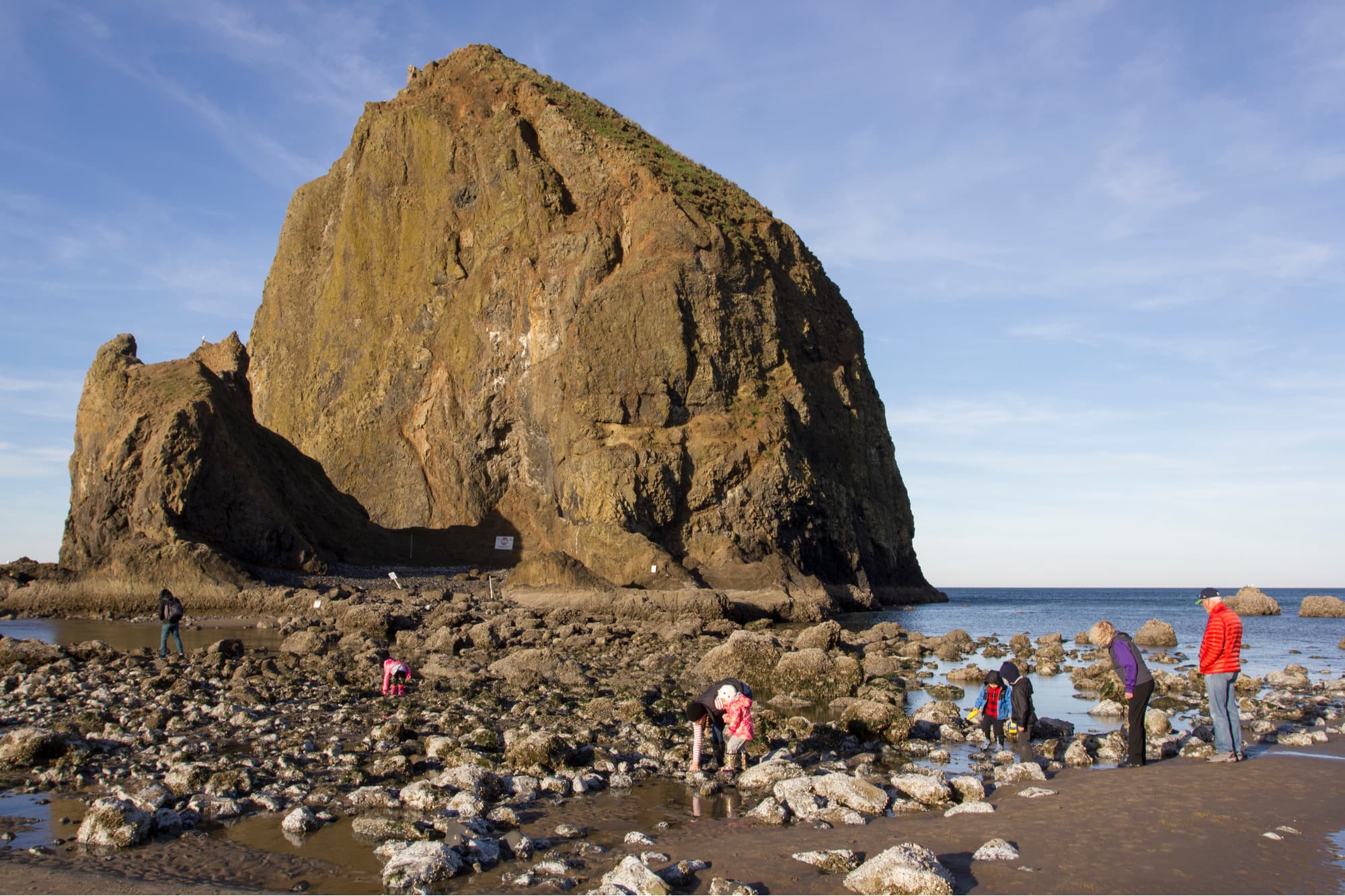 I grew up in the arid desert portion of Oregon, which is known better as a coastal state. When our family took trips to the coast, it involved a four-and-a-half hour winding drive over the Santiam mountain pass and through the coastal rainforest, to the rocky, cold, raucous surf of the Oregon Coast.

Unlike the warm and sandy shores of Southern California, the Pacific Ocean reaches land at the Beaver State with gale force winds and a relentless battering of the rugged coastline. Because of this, the Oregon Coast is quite unlike anywhere else along the maritime borders of the United States.

Each year the tides pull out low enough to reveal treasures along the coastline. Shipwrecks emerge, marine gardens are exposed, and the chances of finding treasure are high. A visit to the coast during an Oregon low tide will certainly be worth your while—here’s what to know before you go.

How High and Low Tides Are Measured

So when you see a negative number on a tide chart that means the tide is falling lower than its average lowest tide. Throughout the month the tide might dip below zero, but generally, the low tide in Oregon hovers at, or just above the lowest average tide mark.

What to See During the Low Tide in Oregon

The lowest tides of 2019 will occur June 4-6, July 3-5, and August 1-3, most visible on the northern reaches of the Oregon Coast, north of Newport. Since the tides fall to their lowest point and then rise within the span of a few hours, it’s possible to hit a few different sites on your way up the coast.

When I went in early June, these are some of the sites I was able to see along the way. 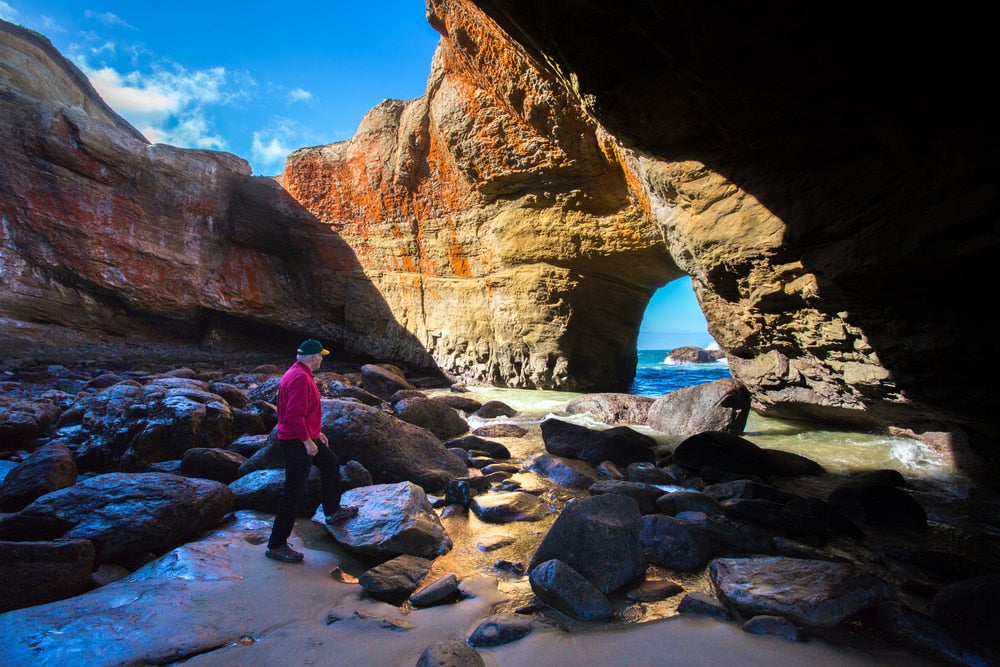 I started at Devil’s Punchbowl State Natural Area near Otter Rock. I arrived around 5 pm on June 4th, as the tide made its steady retreat out of the bowl. Unlike the powerful high-tide photos I’d seen online of Devil’s Punchbowl, the waves now patiently lapped the smooth rocky bottom. Still, the gaping hole sitting below the bluff, with its red streaked walls and hollowed-out archways made me appreciate the power of the ocean.

From what I read, entering the punchbowl would be tricky, even during suck a low tide in Oregon. A series of slick rocks stood between the trail and the bowl, and if you weren’t careful about the tides you could get stuck inside as the high tide crept in—which would certainly lead to death. Even the timid low tide waves were enough to give me pause.

Despite the online warning, the access was neither treacherous or worrisome. The rocks I traversed were covered in green and brown seaweed which could be slippery, so I walked with caution. This caution and slow pace, however, afforded the opportunity to stoop down to the rims of tidepools to try and identify marine life on my way.

Getting inside the punchbowl was awesome. The waves crashed just outside the archway to the ocean—the spray visible but not reaching—and the walls were tall. I felt small and insignificant next to these salt-water battered walls that had been around for millions of years. 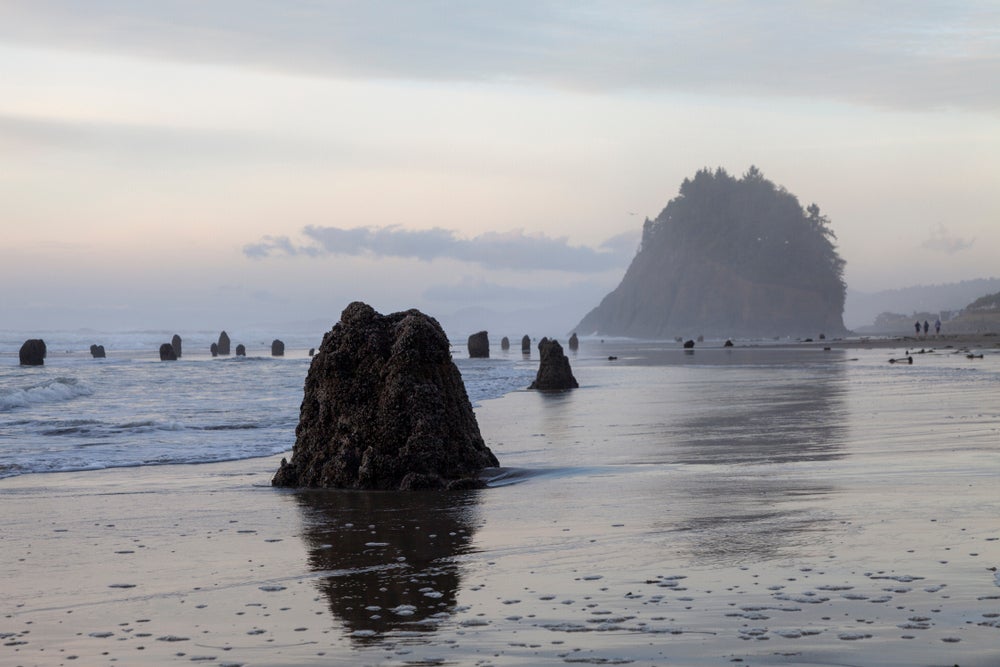 Because I had a short amount of time and a lot to see, I left the beach and headed farther north to the Neskowin Ghost Forest. For those who have time, stability, and access, there’s another low-tide wonder between Devils Punchbowl and Neskowin–Boiler Bay. Navigation to the bay is tricky and finding the boiler trickier still. But with enough time and careful steps, this treasure is worth the trek.

Once parked, I put Nala on her leash and headed towards the beach. We took a left at the sand and could immediately see the Ghost Forest a few hundred feet south. It looked eerie from a distance–these stumpy logs sticking out of the sand. Other than driftwood, trees on the beach feel out of place.

The tree stumps of the Neskowin Ghost Forest are ominous. Scientists believe the trees were buried in a massive earthquake in the 1700s–much like the expected “Big One” on the horizon for the Pacific Northwest–and were unearthed in a massive coastal storm around 1998. Deep beneath the sand lies their tangled network of roots, clinging to millennia-old soil.

It’s clear from the first stump that the constant high and low tide in Oregon continuously bury these trees. They are lined with barnacles and mussels, kelp and sea sacs and only a few rise higher than my 5’6” stature. At the base of the trees, water pools but no roots sprawl or stretch across the sand and no branches grow between the barnacles.

Looking at these ghost trees I wonder what else is buried beneath sand from that storm 300 years ago? And what will the coast look like 300 years from now? Or 30 years, or even three? 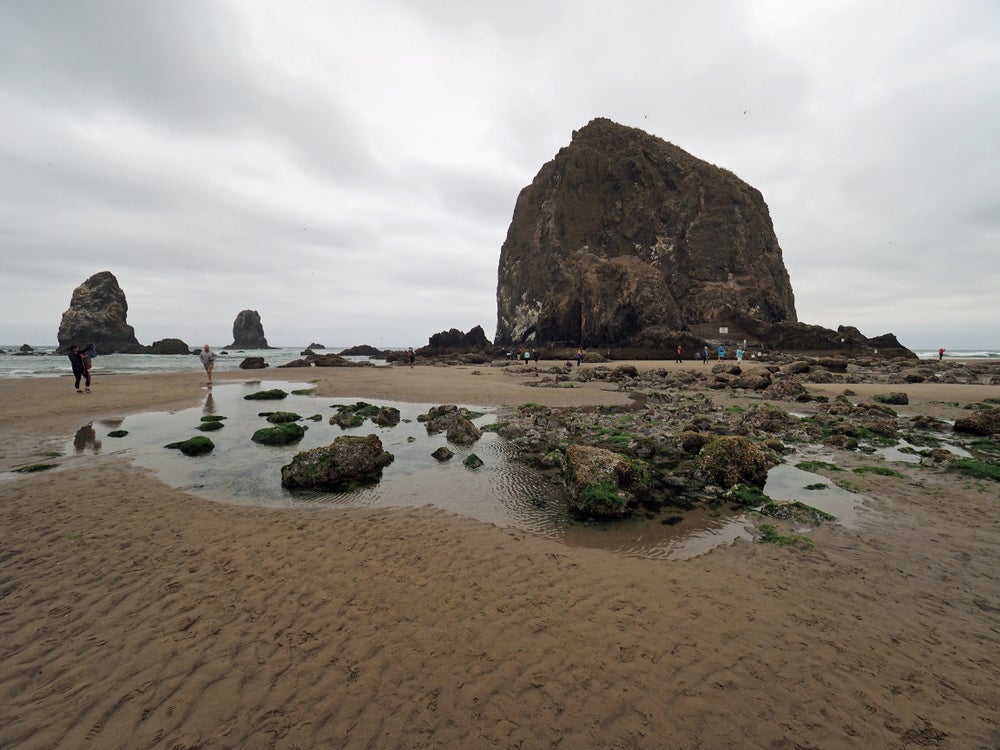 We headed back to the car and continued our journey north to Cannon Beach. Another hour and a half of grand coastal views and climbing the grades of state forests before we arrived at the colorful shops along Hemlock Street.

The next morning I made it to the beach as the tides began their westward processional. Once I hit the beach, it became obvious how low the oregon tide had already gone–you could nearly walk around the western face of the iconic Haystack Rock.

There were already groups of visitors at the marine garden below Haystack, and Haystack Rock Awareness Program had set-up binoculars to view the nesting puffins, common murre, and seagulls in the hollows of the rock.

I caught the attention of Lyla, an intern with the Oregon Department of Fish and Wildlife, who was out educating visitors on the marine garden. She showed me the complexities of the tide pools–pointing out sea stars, aggregating anemones, and how barnacles communicate through a series of clicks. Between the sea birds flying overhead and the intricate communities of marine life in the tidepools, I became completely taken by the ocean.

After an hour of touring the tidepools and watching sea birds fly in and out of their nests, it was time to head home. We walked back to the car and I took one last glance at the waves hitting the base of Haystack with palsy force. It’s never easy leaving the sea, but I know I’ll be back again soon.

The Best Camping Spots near the Oregon Low Tide

If you’re looking to turn a day trip into a multi-day adventure during the low tide in Oregon, these campgrounds offer the best blend of access and amenities. 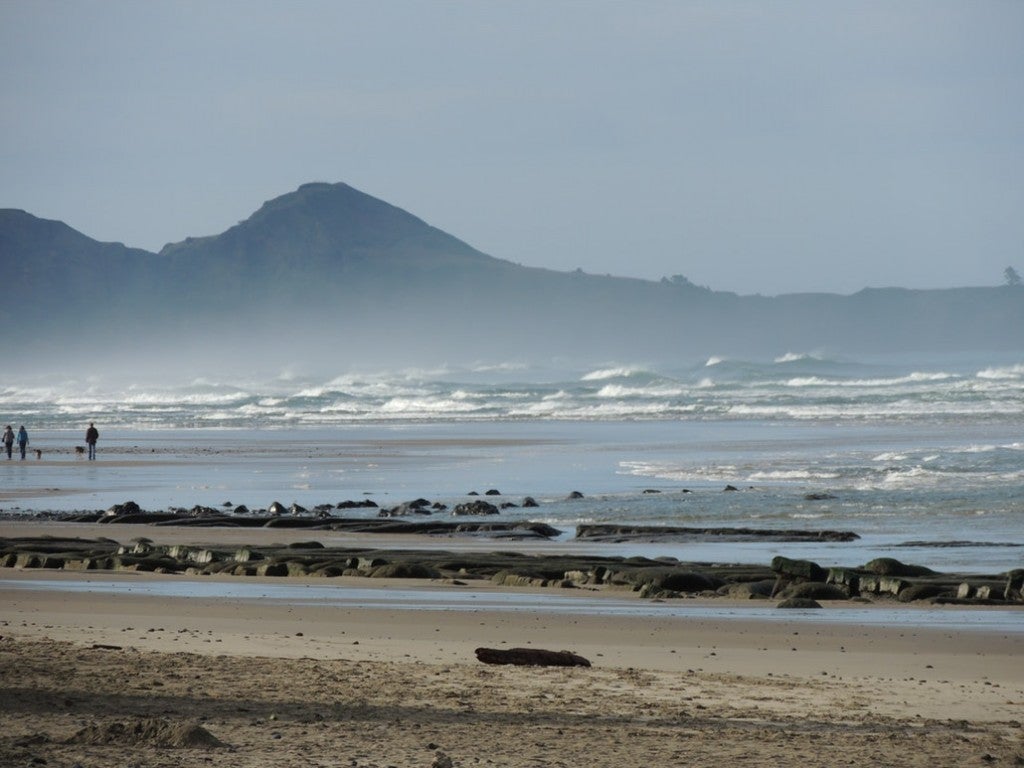 Image from The Dyrt camper TJ B.

Beverly Beach is roughly four minutes from Devil’s Punchbowl and 13 minutes from Boiler Bay. It also offers quick and easy access to the beach and heavily wooded campsites–of which there are over 100. Beverly can fill-up quickly during the summer though, so if you know your camp dates, it’s better to book online in advance.

Surrounding Beverly are a few nature trails, a creek, and a densely wooded forest. The campground host on duty sells firewood and has tons of information on the surrounding area. Each site has its own picnic table and fire ring and the bathrooms are immaculate.

“Great locations! Sleep surrounded by trees and berry bushes! Listen to the waves crashing on the shore while you cook over your fire. Love Depoe Bay, love this chill quiet campground.” —The Dyrt camper Cha C.

Part of Sound Pacific Resorts, Neskowin Creek is a membership campground, but you can camp for your first visit without signing up for a membership. Even still—the membership might be worth it. There are plenty of amenities like an indoor pool and hot tub, sports courts, a dog run, a playground, and a game room.

It’s location is also five stars, only minutes away from the Ghost Forest and the beach with immediate access to the local restaurants in Neskowin. From the Resort, you can also catch a fishing charter, or go hiking in the nearby forest.

“Its located within walking distance to the coast [and has] plenty of activities for the kids to play.” —The Dyrt camper Jeff P. 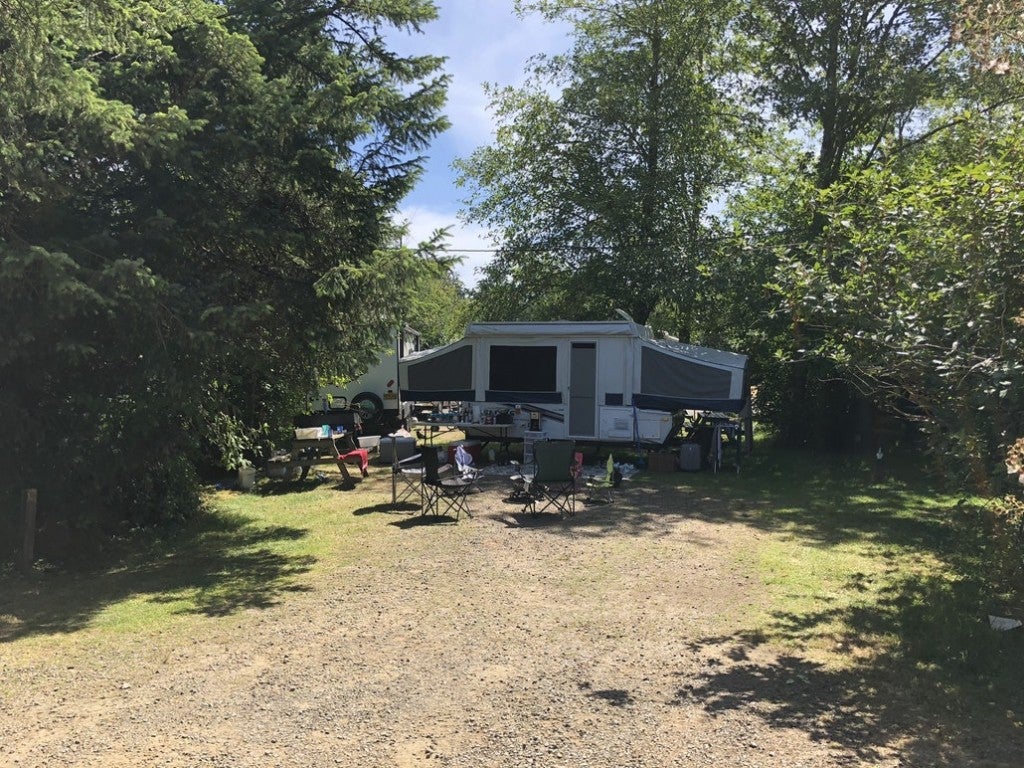 Image from The Dyrt camper Corinna B.

Sea Ranch is set in the perfect location—walking distance to the beach and town, but set back enough to feel like you have a bit of a respite from the hype of Cannon Beach during the summer time. Ecola Creek runs through the park and it’s a less than a five-minute walk to the Public Coast Brewing Co.

There are sites here with full hook-ups, cabins, and tents so any kind of camper can find a site to suit their style. The entire park is lush green with flower-fill walkways throughout. You can’t beat the proximity and the manicured feel of Sea Ranch RV Park.

“I especially appreciate the nice strolls, flowers, and pathways throughout. If you’re looking for a nice place to lay your head while in the area you’ve found a good one.” —The Dyrt camper Corinna B. 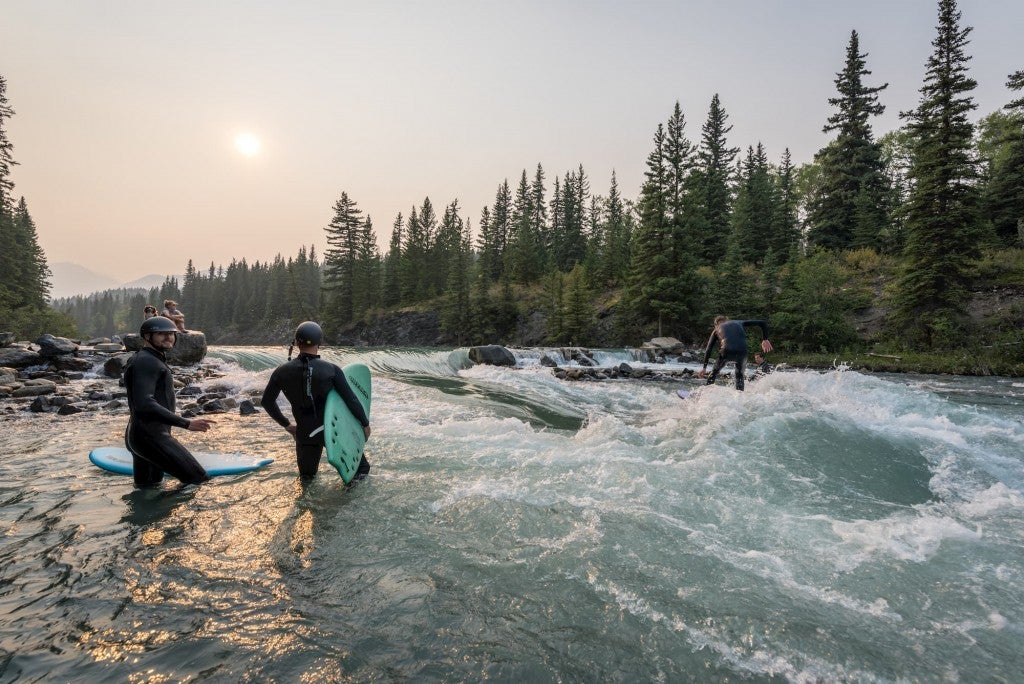 Landlocked This Summer? You Can Still Go Surfing

This article is brought to you by INNO, whose surfboard rack can hold up to 3 short boards or 2 longboards, and includes a universal… 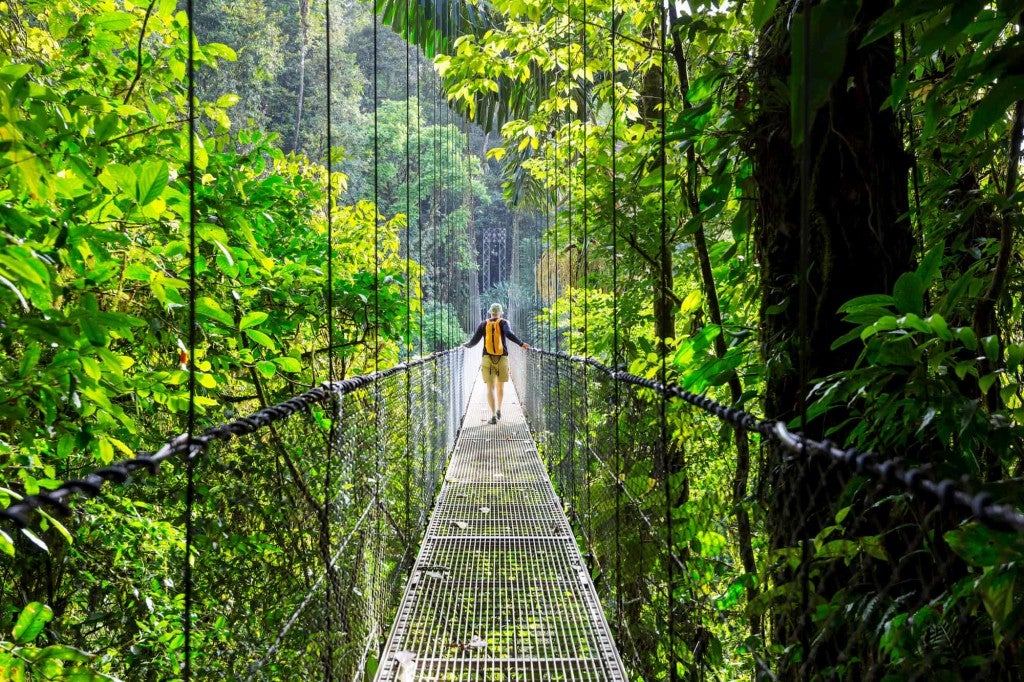 What is Ecotourism and How Can Campers Participate?

This article was brought to you by Stream2Sea, the makers of reef-safe sunscreen that helps protect both your skin and the wild places we love.  It’s been…