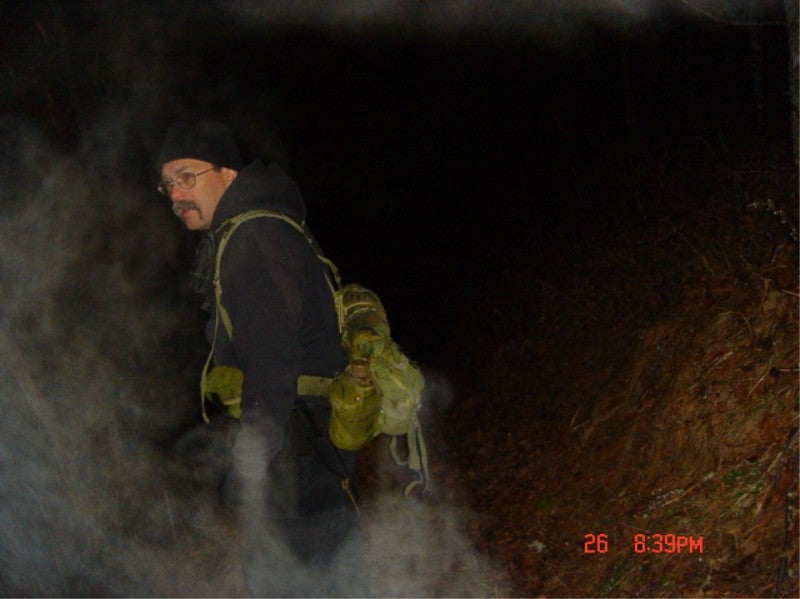 The Dyrt writer Charles Moss spoke to paranormal researcher and empath Shea Willis about her experience at one of the most haunted places in Virginia, Braley Pond. Warning: Some readers may find her story disturbing.

Braley Pond, located in the George Washington and Jefferson National Forest in West Augusta is believed to be not only one of the most haunted places in Virginia, but in the entire US! Reports of children laughing, spirits hovering over the creek, and a paranormal investigator going insane after camping there overnight, are all over the internet.

Because of these rumors, Braley Pond is a destination for professional and amateur ghost hunters alike. However, most investigations have turned up nothing.

After reading one online account of the Shenandoah Valley Paranormal Society’s investigation in 2006, I contacted founder Marty Siebel to hear for myself what happened. Siebel told me, they found…nothing.

But then he referred me to Shea Willis.

A paranormal researcher and empath, Willis has always considered herself a loner. She doesn’t keep up with current events, stays away from the news and pretty much anything social. The friends she does have share a common love and fascination with the paranormal and spiritual.

“It’s like I was born with it,” she told me. “Not from a scare-tactic kind of way—it was more a need to understand it.”

Willis agreed to talk to me over the phone about what she had experienced at Braley Pond on October 25, 2003. It’s the first time she’s ever spoken to anyone connected to the media about this experience.

Braley Pond Campground is a popular camping destination known for its scenic views and stocked fishing pond. Despite being known as one of the most haunted places in Virginia, the large pond remains a popular destination for both campers and anglers in the state.

The Dyrt camper Cara P. calls it beautiful, writing in her review, “The pond has a great little trail you can walk around, and at night the stars are gorgeous.” But The Dyrt camper Jonny D. also notes, “This place makes it seem as if you’re alone.”

These tranquil surroundings, paired with local lore and details of a gristly murder, was enough to attract the attention of Willis and her team. 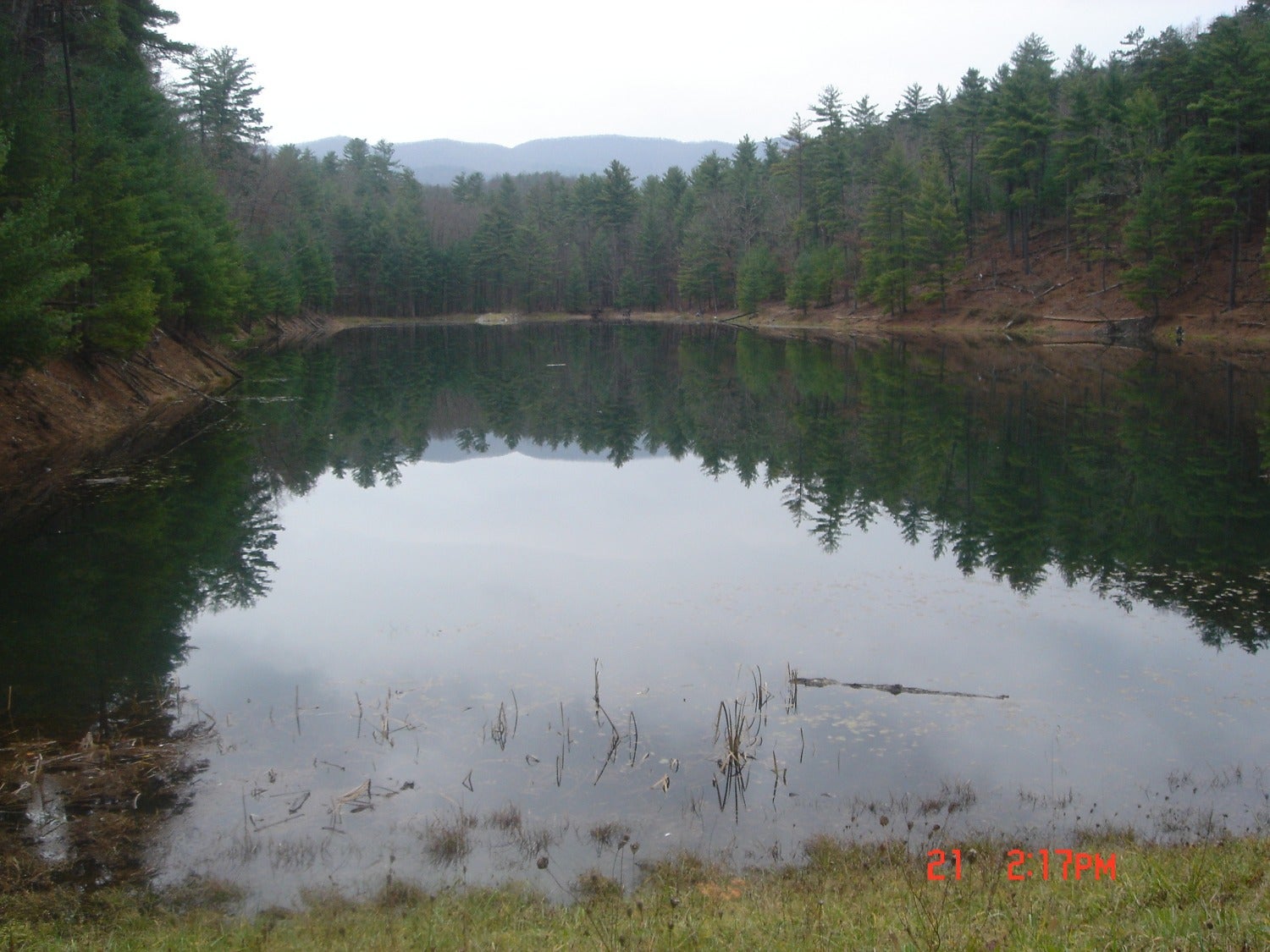 On May 22, 2003, 19-year-old Christopher S. Kennedy was murdered at Braley Pond by local gang members. Two of the members lured Kennedy to the site, stabbed him 13 times in the chest and back, and then dumped his body into the water, according to a court document. Kennedy’s body was discovered by police partially submerged in the pond. The Augusta County sheriff at the time stated, “there was a lot of violence at the crime scene.”

When her friend Kris Arnold (name has been changed to protect his identity) asked Willis if she’d heard about the murder at Braley Pond back in May, and its reputation as one of Virginia’s most haunted places, she was intrigued. She didn’t want any more details; as someone who practices the art of reading the energies of both the living and the dead, she needed to find these things out for herself.

At the time of their discussion, Arnold and Willis led an informal, paranormal-interest group of a dozen or so teenagers, teaching them about the world of spirituality and how to read energy. Willis and Arnold decided that as a group, they would make a trip to Braley Pond.

Investigating One of the Most Haunted Places in Virginia 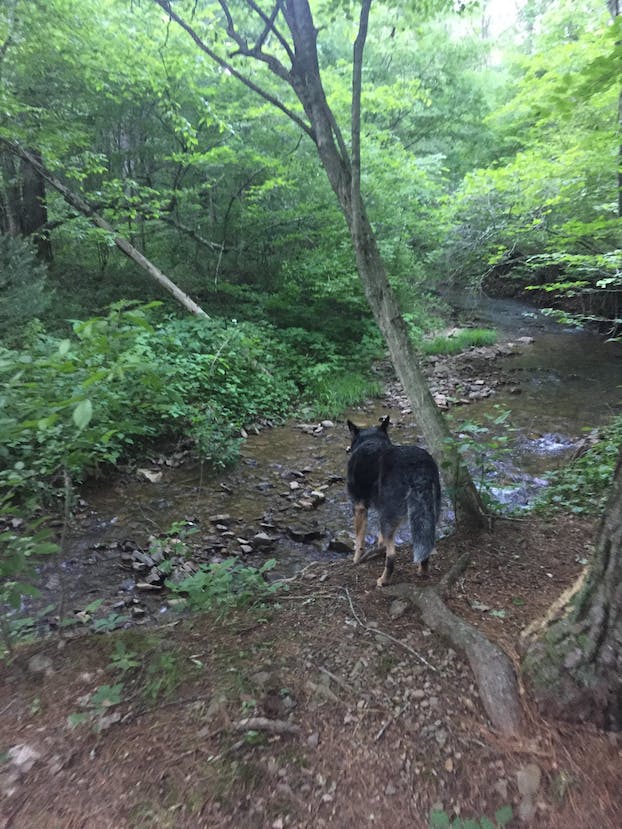 The group arrived around 4:30 in the afternoon, and made their way toward a bridge that led to a dam at the park. She recalls experiencing a very strong sense of what happened there, the moment she set foot on the bridge.

For her work, Willis takes copious notes. Upon arriving at one of the most haunted places in Virginia, she recalls, “It was so heavy as to be almost palatable, and I knew immediately that [this feeling] was not my own. I was feeling something that belonged to someone else.”

By the time the group arrived at the dam, two of the teenagers were physically sick. They began to panic, and as they went further around the side of the dam, they sat down at the edge of the woods to calm down. By that time, Willis was feeling nauseous herself.

Willis had never been frightened of the paranormal, previously. But she was that day.

“I was surprised by my reaction to it. It was definitely the strongest reaction I’ve ever had. And I’ve gone on thousands of investigations in some really strange places. I’ve been into places that, you know, six-foot, 250-pound men won’t go.”

The group decided to leave, but Willis and Arnold went back later that night.

“It Was Waiting For Us” 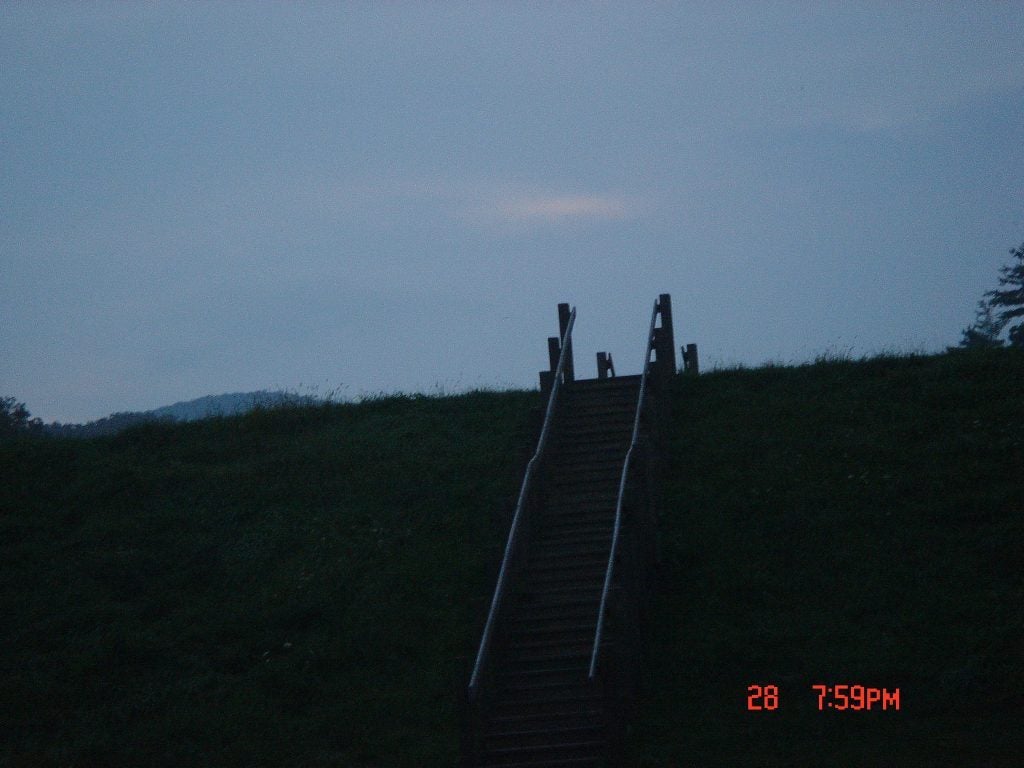 The stairs leading up to the dam. Image from Shea Willis

It was around 11:30pm when the two returned. “I felt as though it was waiting for us,” Willis wrote in her journal. As they crossed the same bridge from earlier, they were overwhelmed with the now familiar feeling of fear and dread.

“I [sensed] another presence ‘behind’ the original one. This one didn’t feel like the others. In fact, it didn’t even feel human,” she continued in her journal.

As Arnold and Willis reached the top of the dam, they heard something moving in the water.

Arnold grabbed Willis by the arm and spun her around to see an unbelievable sight. “In the very top of this very tall pine tree was this kind of green, glowing, orb-shaped thing,” she said. “It wasn’t like it was a pinpoint of light that [you] had to blink hard to see. This thing was huge.”

Willis wrote of the sighting in her journal: “Roughly thirty or forty feet in the air, looking as though it were nestled in the branches of one of the big pines that flank the opening to the path, was a brightly glowing fluorescent green light.”

As she fumbled for her camera to capture the sight on film, the light disappeared in a blink. Then, Arnold and Willis heard something in the pond “splashing violently.”

“There was no mistaking it. It sounded like there was a person in the water flailing and kicking,” she said. “It was loud enough to have been the size of a full-grown person.” 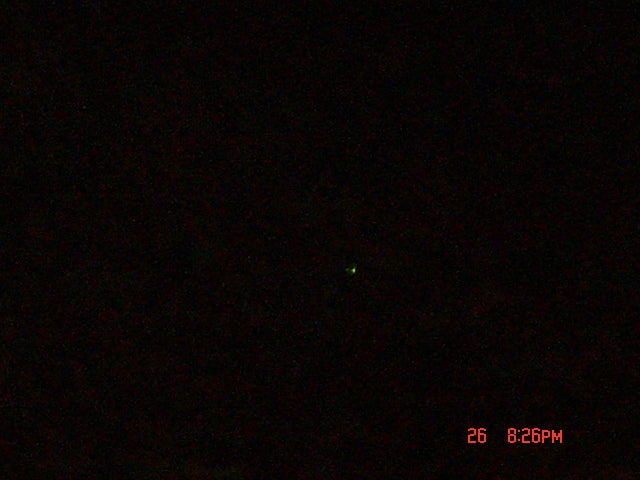 The green orb just before it blinks out. Photo by Shea Willis

After this, Arnold and Willis got the sense that something was coming at them, prompting them to take off as fast as they could down the stairs and back to the truck. As they were running, with Arnold in the lead, Willis witnessed Arnold suddenly fall into the water. But as she explained, he didn’t just fall.

“I don’t know how to explain it except for he literally flew upwards and to the left, as if something had hit him right in the middle of his back, like using his forward momentum, and he went off the side of the bridge into the water.”

Willis stopped at the water’s edge, knelt down and began screaming for Arnold, who assured her he was okay. He begged her to keep going, to keep running. As she stood up, she felt something land on her back.

“I Could Feel it Moving Around on Me”

In the interview, she detailed the way it moved along her back, like a two-foot-long inchworm, humping its way from arm to arm and across the back of her head. In her journal, Shea described it as “psychic jelly.” She wrote, “It felt as though it had some sort of tentacles.”

I must admit that over the phone, I had trouble believing all of this. It all sounded so fantastical. I told her so, and she got it. She understands how this must sound to anyone who wasn’t there.

“There’s people that are going to take one look at what I’ve said, and they’re going to think I’m either trying to sell something or I’m out of my mind. But there are witnesses to all of it,”  Shea told me. 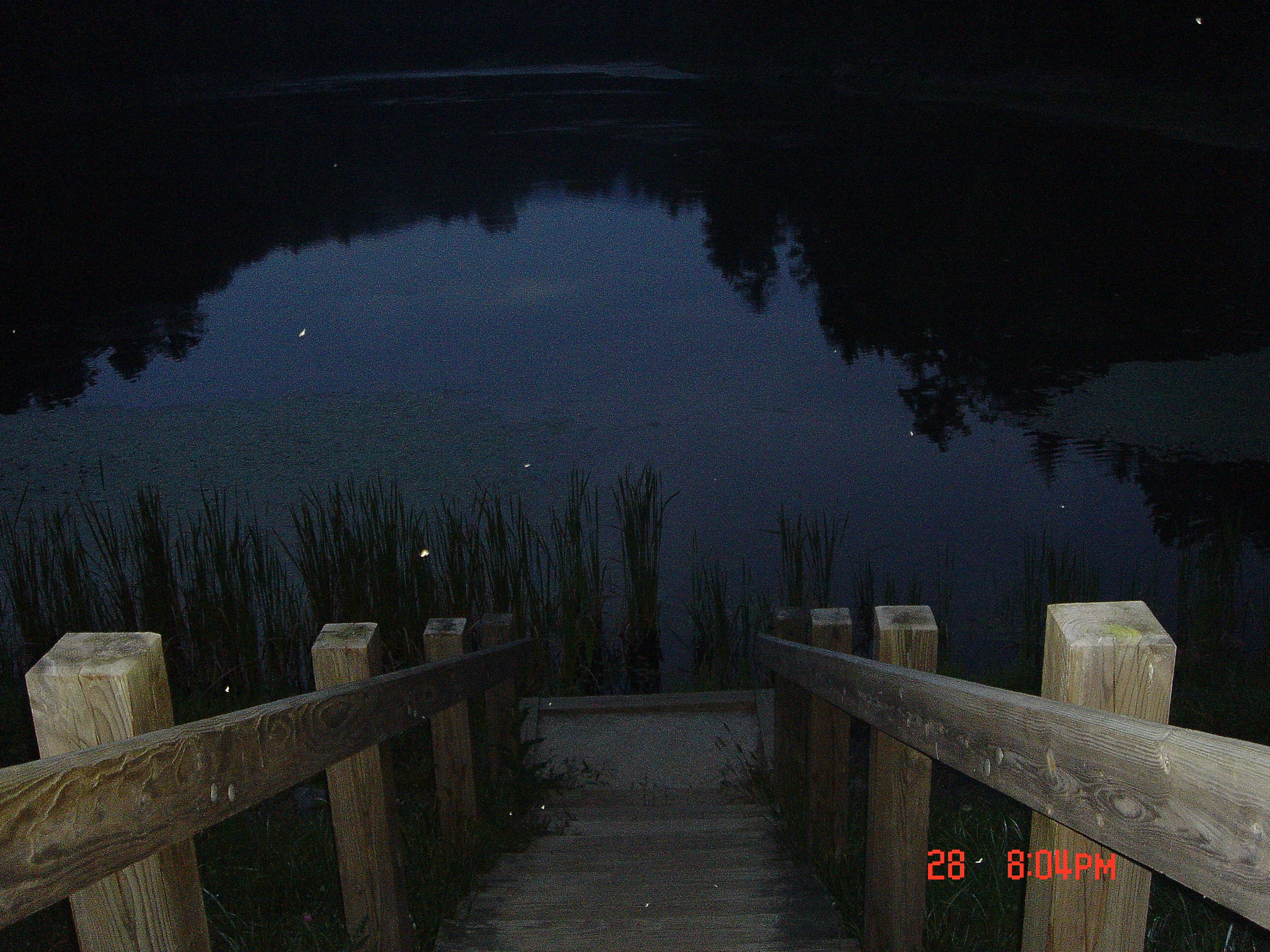 View from top of dam going down to the pond’s edge. Image from Shea Willis

As she made it to the truck, Arnold tried to find what was on her but couldn’t see anything. Climbing inside, Willis began crying. Arnold tried to calm her down, insisting she was simply upset by what they had experienced earlier. But Willis insisted, “It’s crawling all over me!”

The audio above documents when Willis and Arnold were running down the dam from the mysterious presence, heading for the bridge. The screech at the end happened when they got to the bridge, right before Arnold fell into the pond.

Willis’ experience did not end with that night. She had vivid nightmares, and strange incidents would occur for weeks.

“It was like a communication with whatever this thing was,” she said. “Like little bits and pieces of it were still stuck with me,”

She would draw pictures of tentacle blobs while she was at work. She still felt out of it—not like herself at all.

Willis and Arnold made additional trips to Braley Pond in November of that year, trying to make sense of what happened. They witnessed beavers acting strangely in the water, and their video camera’s battery drained suddenly on one occasion. Willis even went back by herself; she felt as if she was pulled to go. She got out of her car and circled the parking lot, as if in a trance, watching the bridge and dam.

That same terrible feeling she felt during her initial trip was back.

Later on this solo trip, she found herself in the park’s bathroom, bent over and staring down into the toilet. She remembers nothing between the time she was in the parking lot and when she realized she was in the bathroom.

A few weeks after this, Willis and her husband were in bed watching television one night when they heard their eight-year-old son screaming wildly from the living room. When they reached him, he was pointing to a corner of the living room. Willis and her husband asked him what was going on. Their son said he saw a guy standing there with multiple holes in his chest; wet, and covered in blood. To comfort him, she suggested it might have been a shadow.

Eventually, Willis began to feel like herself again; the thing on her back was gone. On her most recent trip to Braley Pond in 2007, it was as if nothing had ever happened.

Whatever was at Braley Pond four years prior had vanished.

Charles Moss is a freelance writer with bylines in The Atlantic, Washington Post, Vice, Slate, The Week, The Bitter Southerner and other outlets. A lifelong resident of Chattanooga, Tennessee, he and his family enjoy camping, hiking and all the beauty the Scenic City has to offer. 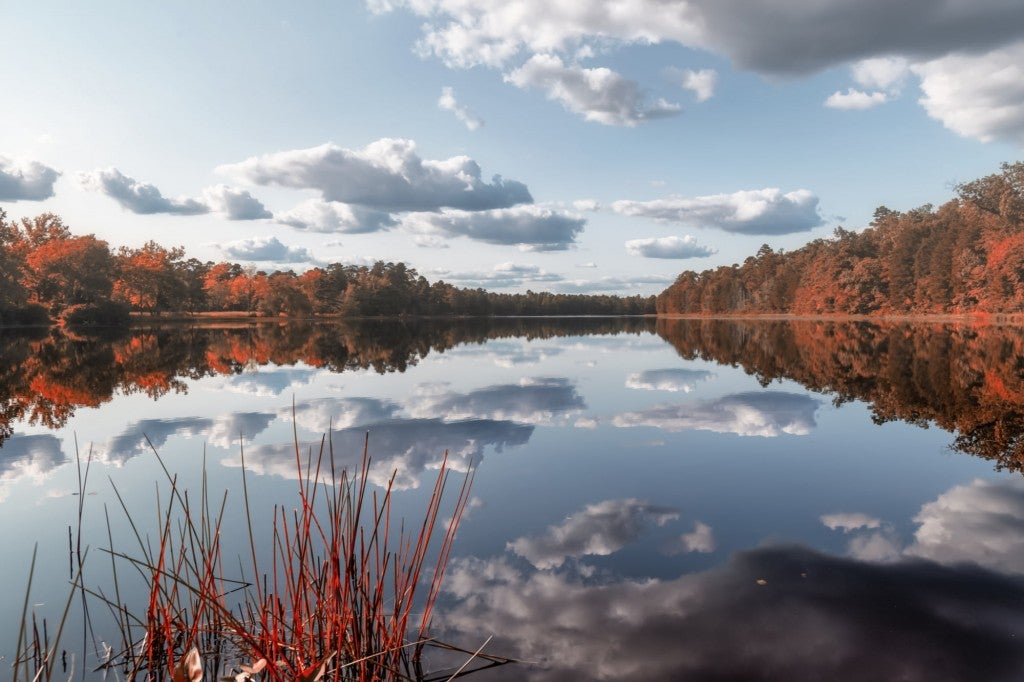 When most people think of New Jersey, they think of highways, traffic, and New York City, but the state is much more than that. New… 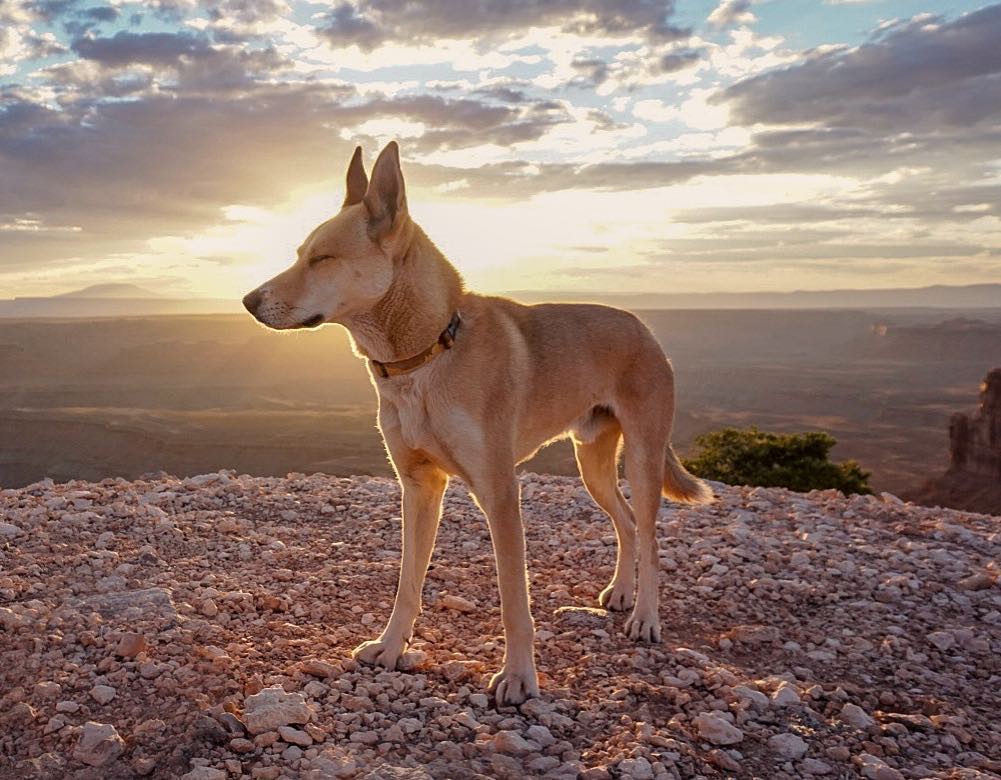 Thousands of people are checking Instagram today, hoping for a miracle. Dagwood is the dogson of Keith and Brianna Madia, who you might know from…