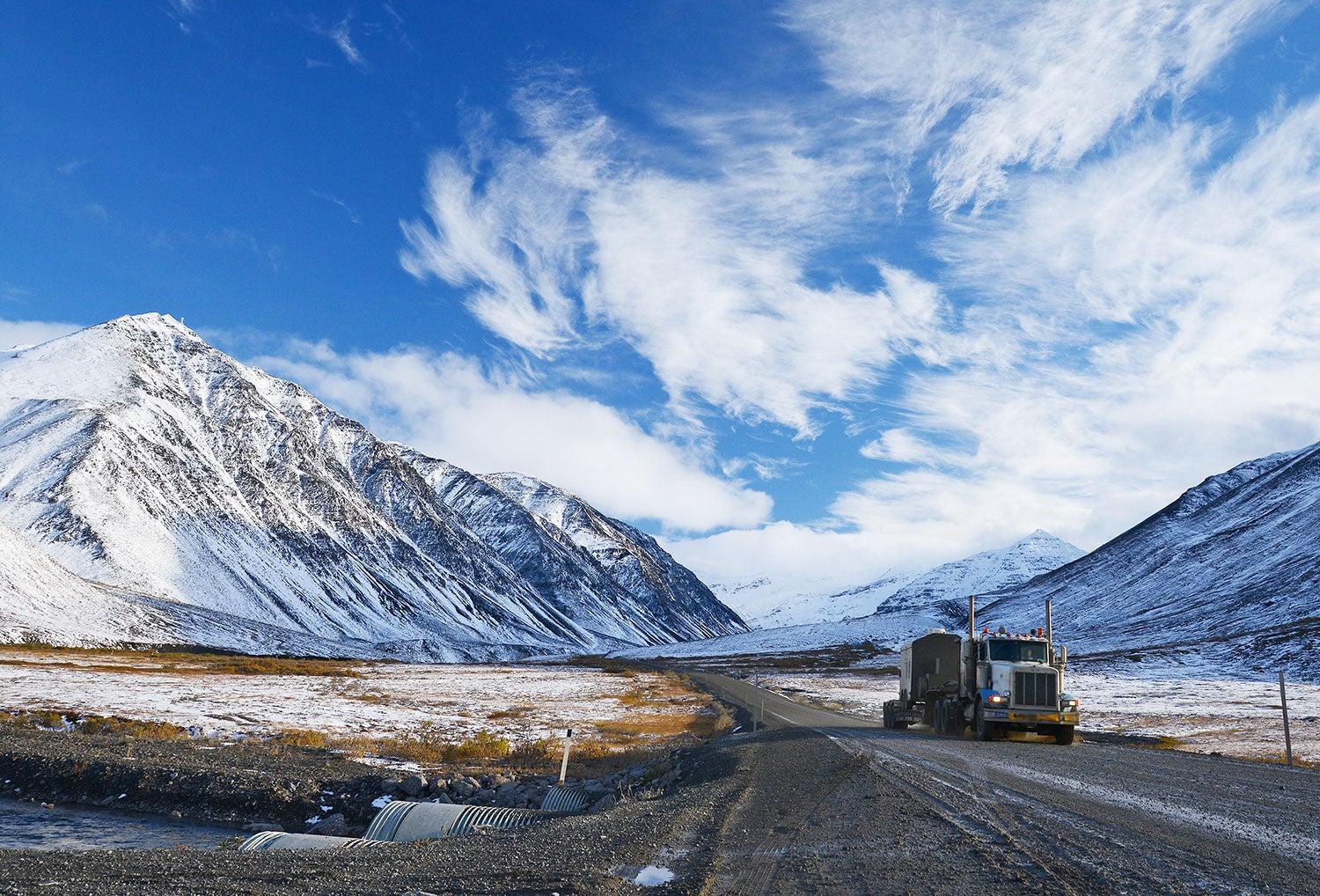 This article about braving the Dalton Highway is brought to you by our friends at Midland radios — whose MicroMobile is the overlander’s preferred choice for two way radio communication even on the most notorious roads.

Alaska’s rugged Dalton Highway grew in fame and notoriety with the History Channel’s hit show, Ice Road Truckers. The show referred to the highway as “a road where hell has frozen over.” It’s America’s northernmost highway and perhaps the most infamous.

The desolate road beckons bold explorers from around the world to test their vehicles, overlanding skills, and determination. The Dalton Highway is 414 miles of two-lane gravel road stretching from just north of Fairbanks to Deadhorse on the shores of the Arctic Ocean. Travelers will encounter steep icy inclines, muddy curves that disappear in the thick fog, potholes that could swallow a VW Bug, and flying rocks kicked up by big rigs.

If you’re looking for a leisurely Sunday drive–you won’t find it here. Those who have a sense for adventure will be rewarded with remote Alaskan wilderness on their drive to the top of the continent.

The highway, also known as the North Slope Haul Road, was built in 1974 to accommodate the construction of the Trans-Alaska pipeline. Most of the road’s travelers are truckers carrying supplies, fuel, and equipment to the oilfield workers in Deadhorse. Only brazen tourists drive this road for leisure with many turning around part way through.

The Dangers of the Dalton Highway 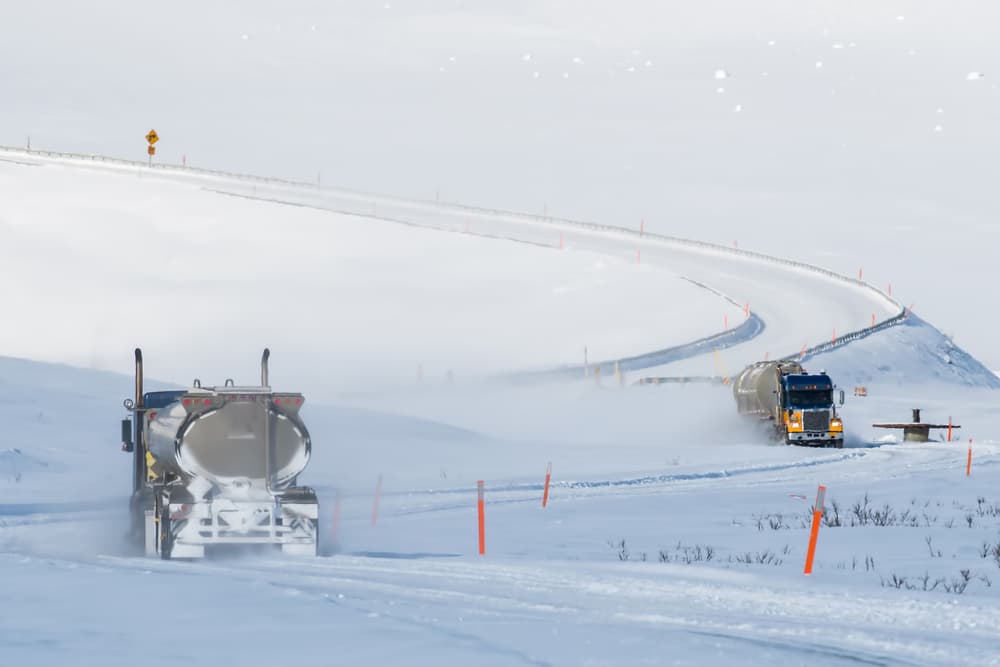 The narrow mostly-gravel road and requires 100% concentration. From sharp rocks, loose gravel, and giant potholes, there are numerous road hazards.

During the summer with nearly 24 hours of daylight, the road becomes washed out and flooded in low lying marshy areas. This makes it easy to get bogged down in mud or pulled off the road if you drive too close to the soft shoulder.

It has claimed many lives and even the most experienced drivers aren’t immune. In August 2018, a Dalton Highway veteran and the road’s only female fuel tanker driver, Joy Wiebe, died in a fatal rollover about 30 miles south of Deadhorse. Her death was the 6th in the last 10 years. She had been driving the road for 13 years and is said to have known it better than anyone. She was often described as one of the safest truckers on the road. Yet her experience and precaution did not protect her from the hazards of this highway.

Due to poor road conditions and the lack of services — most rental car companies prohibit travel on the Dalton Highway.

Weather has a major impact on any outdoor activity. On the Dalton Highway, drivers face high winds, whiteouts, and thick fog. After Wiebe’s crash, truckers united to improve the safety of the highway. One trucker said that the roads visibility is so bad at times you “don’t see a truck until you see headlights 16 feet away.” Severe side winds can also limit visibility and create impassable snow drifts that are as solid as concrete.

Temperatures along the road are always cold, but in winter temperatures can drop to 20 below zero and colder. In fact, the coldest temperature ever recorded in the U.S. was along the highway. On January 23, 1971, temperatures near Prospect Creek plummeted to -80 degrees Fahrenheit. Even during the summer months the weather can be unpredictable. It has been known to snow along the highway every single month of the year.

During the summer, travelers also have to watch out for flash flooding and fast-moving wildfires.

Frigid temperatures and blizzards in July aren’t the only risk. The lack of people, towns, and services poses danger as well.

According to the BLM, there are no medical facilities between Fairbanks and Deadhorse. There’s a 240-mile stretch without any services. No gas. No cell service. No food. No shelter. Driver’s should also be warned, there are no grocery stores or banks. The first ATM is not available until you’ve reached Deadhorse.

There are only three towns along the highway:

If you’re going to tackle the Haul Road, then you will need to be prepared with ample supplies. In the event of an emergency, it can take hours or even days for help to arrive. Travelers should be prepared to be self-sufficient.

Preparing for the Journey 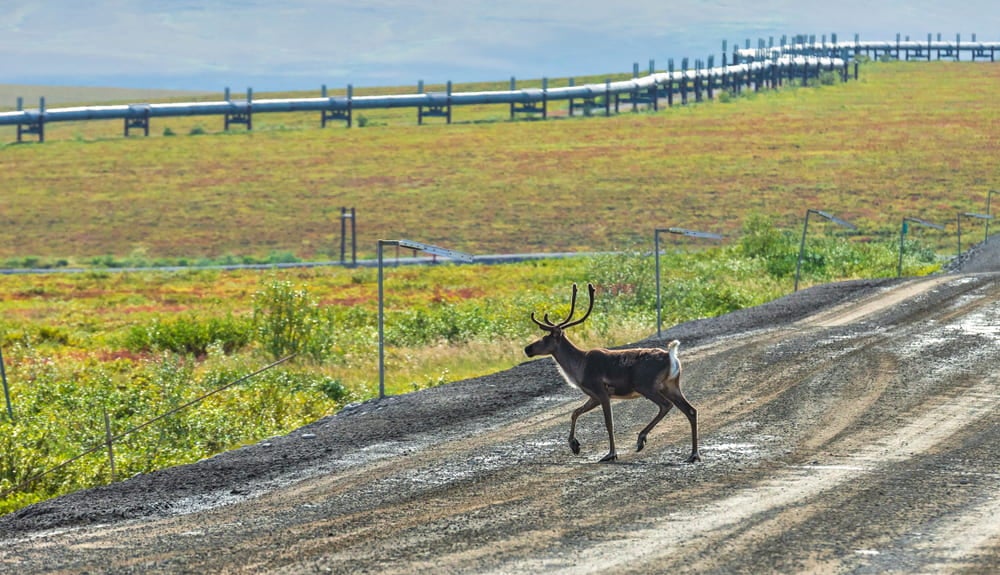 The highway begins 84 miles north of Fairbanks in Livengood and travels through incredible terrain to its northern terminus at Deadhorse near Prudhoe Bay. Travelers can expect to see moose, Dall sheep, caribou, arctic foxes, muskox, thousands of migratory birds, and both black and grizzly bears along the drive.

Early in the journey, the highway crosses the mighty Yukon River. In the first half of the trip, you’ll pass 2 of the 3 towns along the highway. At mile 235, you’ll pass the highway’s “Last Tree” as you head into the frozen tundra.

Shortly after passing the last of the boreal forest, the road begins to carve through the Brooks Range and up Atigun Pass (4,739 ft) over the Continental Divide. The rivers north of the divide empty into the Arctic Ocean. Rivers south of the divide flow into the Bering Sea.

As you get closer to the Arctic, the road winds its way through open frozen tundra and along large glacial lakes. Unfortunately, public access ends at Deadhorse and the Arctic Ocean is not visible from the highway. The only way to see the ocean coast and the oil rigs is by booking a tour with an authorized tour company.

Preparation for the Expedition

The BLM recommends travelers bring a variety of essentials for both their vehicle and passengers. Before you leave Fairbanks, thoroughly inspect your vehicle and gear.

Gear for Your Vehicle

While there’s no cell service along the highway, CB radios are an excellent communication device. Truckers and workers along the highway depend on CB radios. In the event of a critical emergency, you can use you MicroMobile or CB radio from Midland to call for help to a nearby trucker who can relay the message to the State Troopers. CB radios and MicroMobiles also come in handy in poor visibility. You can communicate with truckers, flaggers, pilot cars, and heavy equipment operators about road conditions and whether it’s safe to pass.

While crystal clear glacier water may seem tempting to drink, you should stick to bringing your own water. Giardia is common across Alaskan waterways.

Whether you embark on the highway in the summer or winter, be prepared sudden and drastic changes in temperature. Average summer temperatures can fluctuate more than the 50 degrees!

The BLM’s Rules of the Dalton Highway

Where to Camp Along the Way 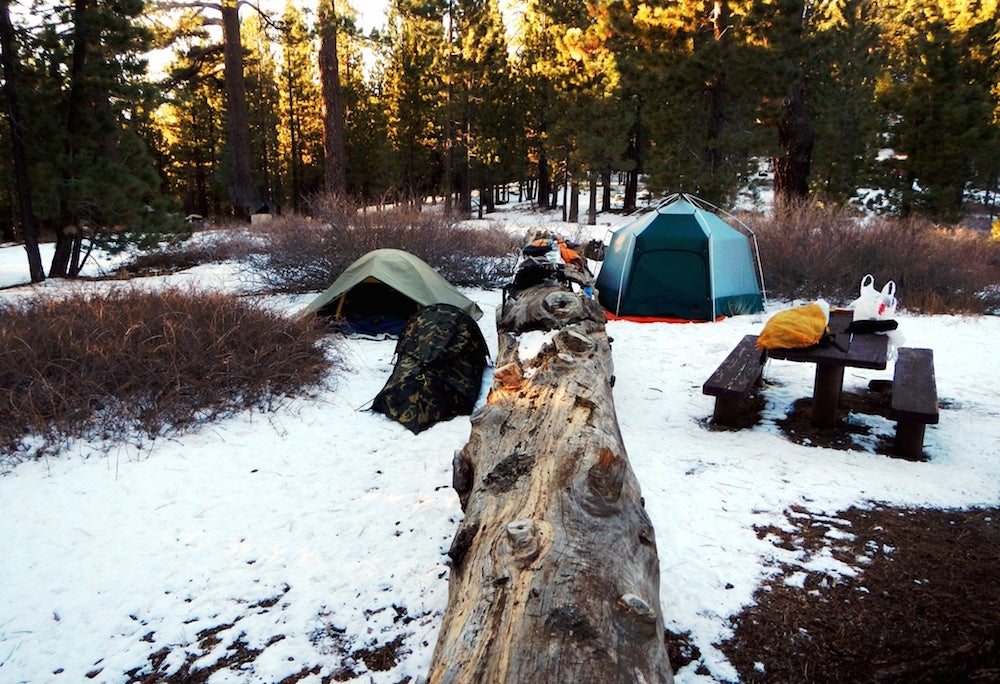 Although there are few towns, there are a handful of campgrounds along the highway. For those who are looking to take make this rugged journey even wilder–grab your tent and set up at these 4 campgrounds.

Only 4 miles north of the Yukon River, this is probably the most “luxurious” campground you’ll find along the Dalton Highway. The campground has 30 campsites and includes picnic tables, fire rings, pump water, pit toilets, and a sewage dump station

Earn your Pioneer Badge by being the first person to review Five Mile campground on The Dyrt.

This free undeveloped campground offers the bare bones for campers. While fires are allowed, campers won’t find hookups, water, or cell service here. However, you will find picnic tables and a scenic viewpoint. The Dyrt camper Anne M. described the campground as having “beautiful scenery and kept up spots. Very remote.”

This campground is a little more spendy than the previous campground — for $8 per night you’ll have your pick of 27 campsites. The campground also offers outhouses, fire rings, hiking trail access, and wheelchair accessibility. The Dyrt camper Valerie S. stayed here and avoided (some of) Alaska’s notorious mosquitos, saying there were, “less mosquitoes than other places along the Dalton highway.”

This is another free campground. It offers a pit toilet, but other than that it is largely undeveloped. However, it is not a destination to be dismissed. This campground is located near the glacier formed Galbraith Lake on the western border of Gates of the Arctic National Park. Campers can take hikes among tundra wildflowers, explore the surrounding Brooks Range, and admire the Atigun Gorge.

Earn your Pioneer Badge by being the first person to review Galbraith Lake campground on The Dyrt. 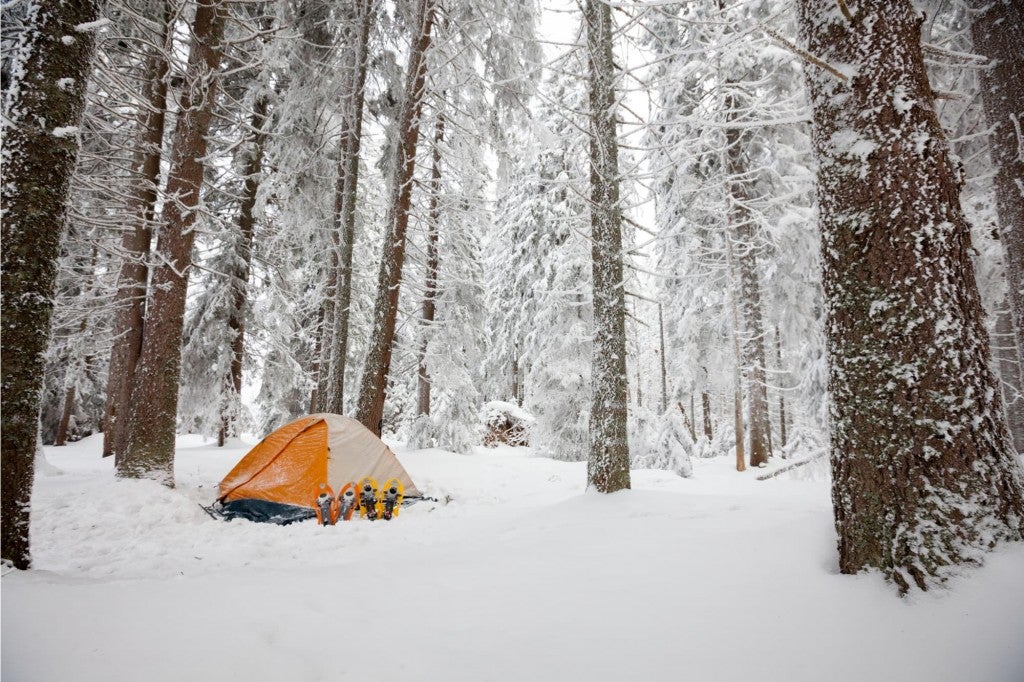 What to Do and Where to Camp This Winter (Yes, Winter!) in Wisconsin

Wisconsin borders three of the most famous waterways in America; Lake Michigan, Lake Superior, and the Mississippi River. While this is a big draw to… 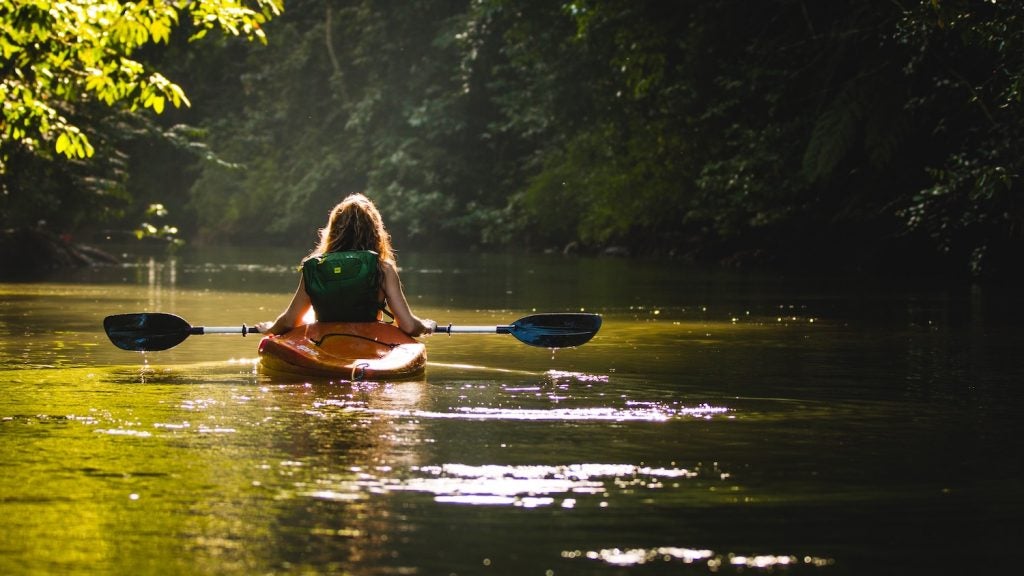 With its 40,000 miles of rivers and streams and five large and natural freshwater lakes (as well as many other smaller natural and manmade lakes),…