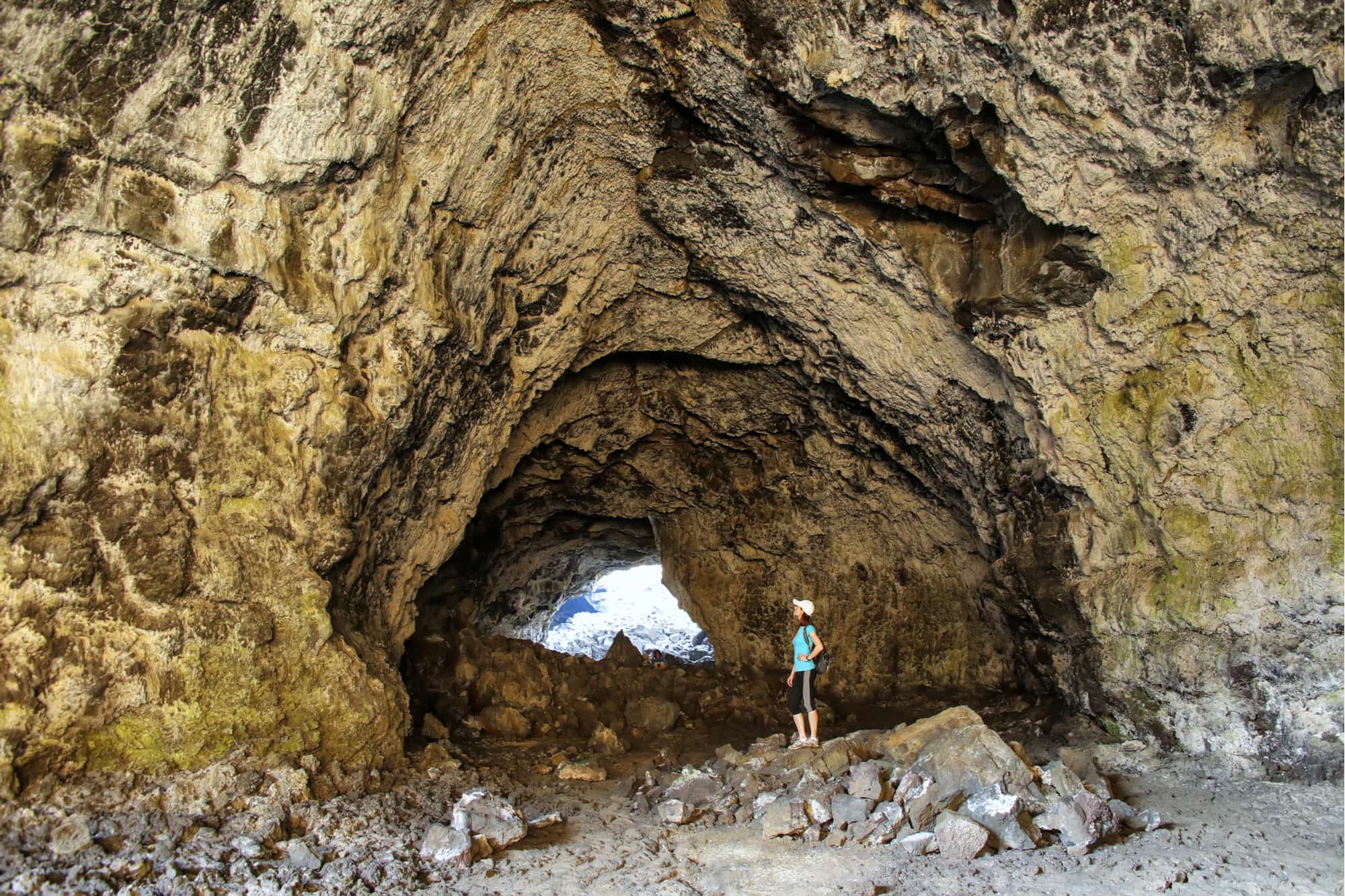 When Calvin Coolidge designated Craters of the Moon a national monument using the Antiquities Act in 1906, he described the area as “a weird and scenic landscape, peculiar to itself.”

Craters of the Moon is undeniably peculiar. Driving east across Idaho from I-84 to Highway 20 takes you through the flat volcanic arc that sits beneath the Snake River Plain. From the plain, mountains rise on either side to create Sawtooth National Forest to the north and a series of mountain ranges, like the Bannock and Blackfoot Ranges to the south.

Craters of the Moon is situated along the Snake River Plain, which extends from the border of Oregon to Yellowstone National Park. Here, fissures in the earth’s crust have created a series of lava flows and cinder cones that have turned the once green landscape into a sea of black volcanic rock.

A Camper’s Guide to Craters of the Moon, Idaho 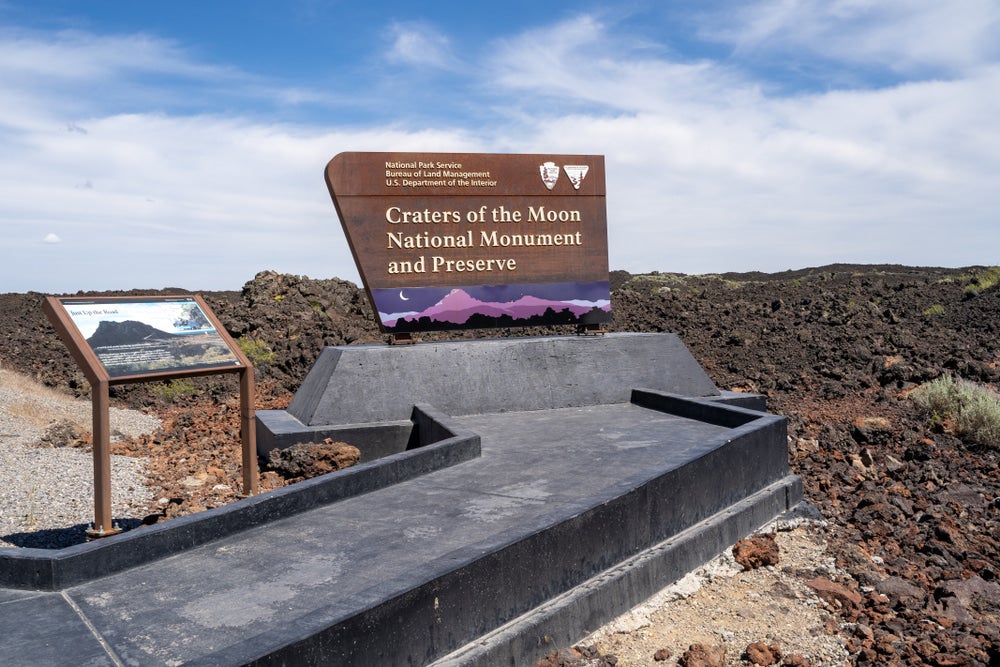 When the Great Rift welled up 15,000 years ago, it spewed hot lava across roughly 750,000 acres. According to archeological and oral history, the Shoshone-Bannock tribes traveled through the territory and witnessed volcanic eruptions as they happened. In their migration from the Snake River to Camas Prairie they left behind well-worn trails and stone circles on top of the lava, many of which are still seen today throughout the park.

My family and I arrived to Craters of the Moon on a Tuesday morning with plenty of time to explore. Our first stop: the visitor’s center. At Craters of the Moon, there’s an interactive display of the Snake River Plain and Great Rift, the First Nations history of the Shoshone Tribe, and information on the trails, caves, and camping.

As soon as we entered the monument we were transported to a near-desolate environment. Along either side of the road were vast expanses of hardened lava like piled rocks dumped on each other. It looked as though a massive dump truck had transported the stones from the surface of the moon and piled them across the landscape.

Of the 60 lava flows in the park, 20 have been dated to between 15,000-2,000 years old and comprise a series of lava types from áa lava–jagged and rough, to pahoehoe lava–billowy and rippled.

Look closely at the rocks and flows that dominate the park––they look like they could be straight from a painting. Maroon and blue, orange and gray, specks of white dot the rocks to form an archaic, natural composition, like solid, molten-lava artwork. You can see how the lava stretched and bubbled, oozed and flowed from its origins in the center of the earth to the surface, and by looking at the rock is seems obvious that the lava moved slowly, but determined across the Snake River Plain.

A quick stop at the visitor’s center isn’t the only way to explore Craters of the Moon, Idaho. Below, you’ll find some of the park’s best hikes, cave tours and camping options, all offering a broader scope of this strange-yet-enticing environment.

Hike the Craters of the Moon, Idaho

Once on the 7-mile scenic loop, there are hiking options for every ability level. From the seven main stops, visitors can access the most popular and scenic hikes to explore the landscape up close. 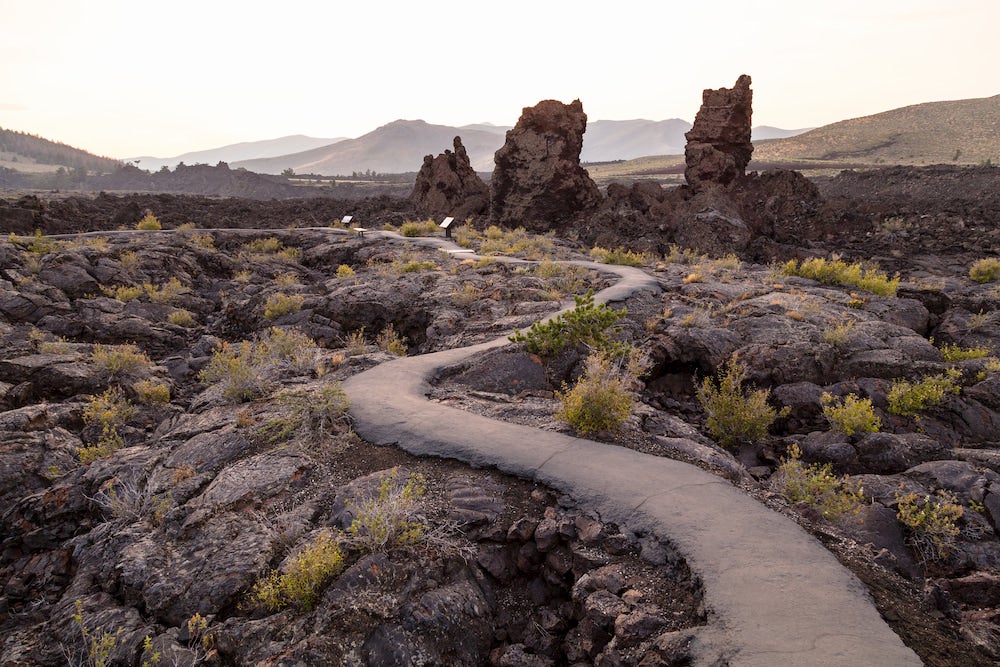 This short-but-sweet .3-mile trail takes you through one of the youngest flows of the park to see monoliths left from cinder flows, fragments from craters, and heaps of lava rock on either side of the trail. Currently, they’re paving a new trail here to make it more accessible. From the North Crater Flow Trail you can also access the vent of North Crater on a 1.8-mile hike that takes you back to the visitor center.

From the scenic loop, take the spur road after the Spatter Cones parking lot to access a series of trail heads. Tree Molds Trail is 2-miles round-trip trail with lava-charred trees and a black, expansive landscape. 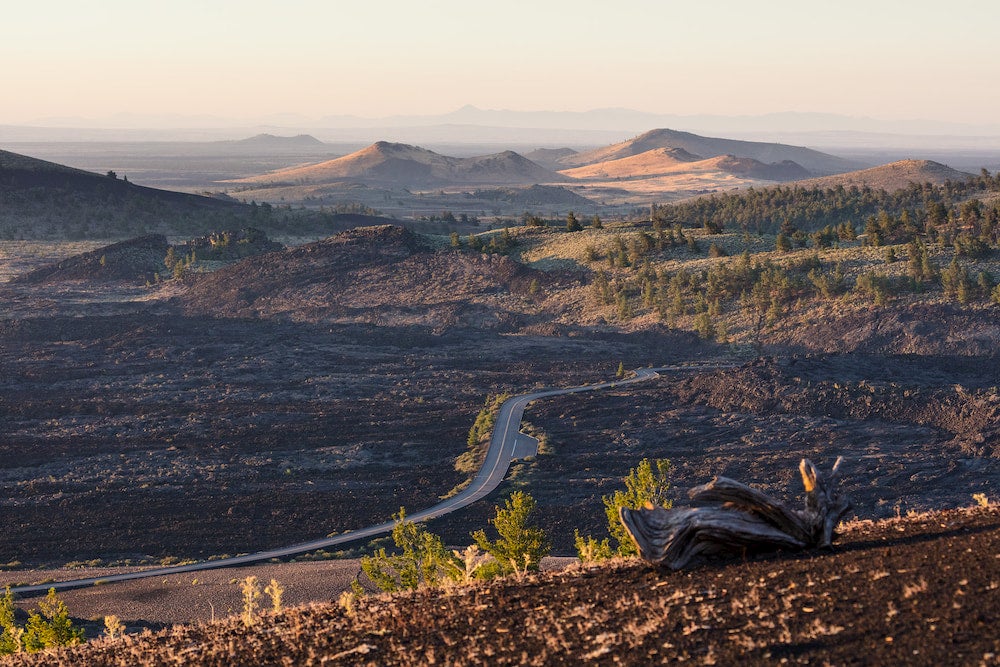 A sweeping view of the Crater of the Moon lava fields form the top of the Inferno Cone Trail. Image from NPS / Jacob W. Frank

Styrofoam-like black rock covers the Inferno Cone, which offers a steep .4-mile round trip hike for some of the best views in the park. The hike up is a calf-burner, but once at the summit, you can see the reaches of the park as well as the nearby Spatter Cones. At the top, a strange red-rock formation and lone, lush tree exist side-by-side.

Circling a cinder cone, this 1.9-mile round trip hike takes visitors around and to the top of Broken Top with excellent close-up views of pahoehoe lava and áa lava. There are also charred trees and sagebrush, sunken craters, and wildflowers. 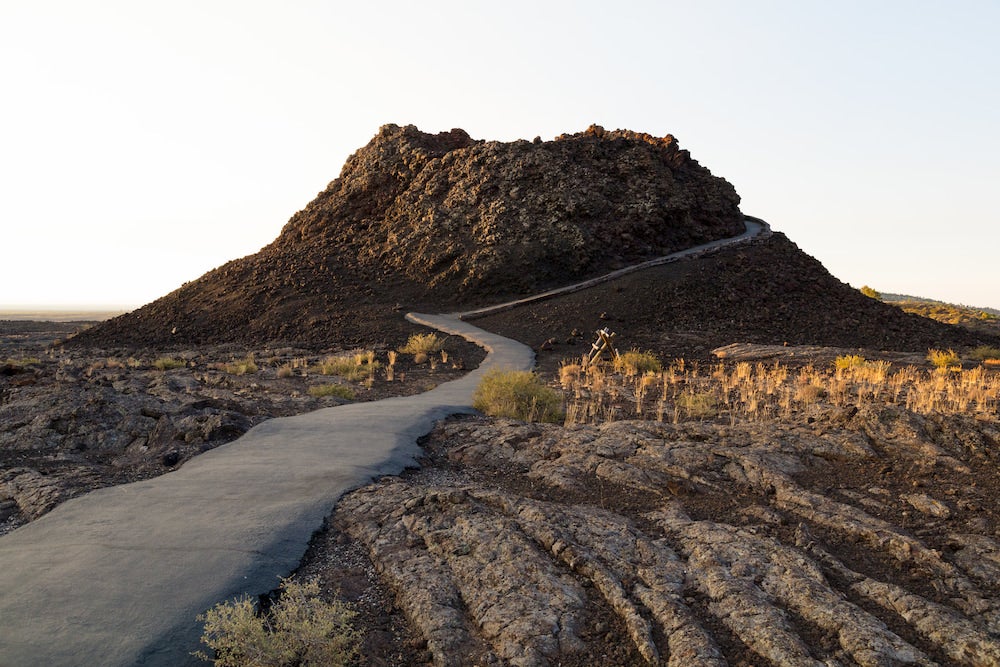 If you spot the Spatter Cones from the Inferno Cone, you’ll likely want to get up close and personal to these mini-volcanos. Thankfully, the trail is shorter and less steep than the Inferno. A short paved hike accesses the volcanoes and a .25-mile steep spur trail branches off to catch a glimpse of the Big Craters.

For anyone who wants to explore deeper into the park, check out the Wilderness Trail which accesses the depths of Craters of the Moon and the surrounding designated wilderness. Backpackers use this trail and camp at Echo Crater, 3-miles in from the trailhead. 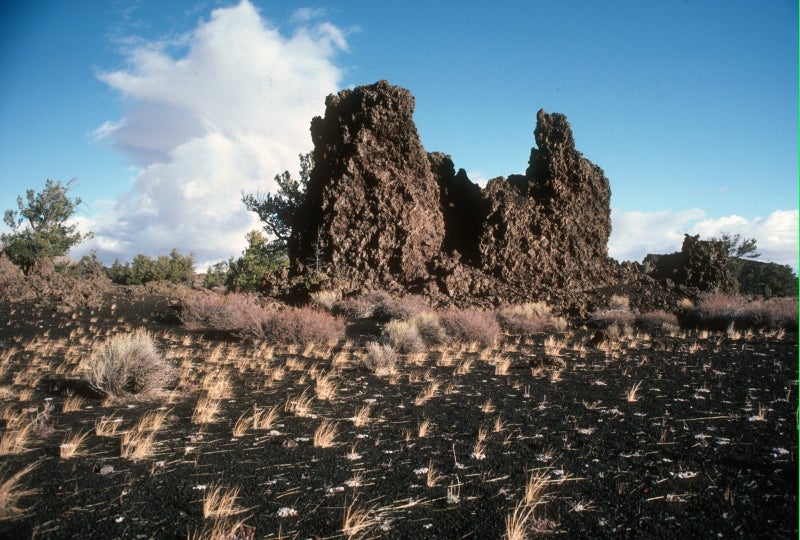 Volcanic rock walls jutting out of the earth in Devil’s Orchard. Image from Craters of the Moon National Monument on Flickr — CC BY S.A. 2.0

To see how life manages to survive after a biologically catastrophic event, head to Devil’s Orchard. Crippled trees rise from the black rock earth amid lava fragments, sage, and bitterroot. The 1-mile round-trip hike is paved and accessible.

Exploring the Caves at Craters of the Moon

There are five lava tubes and caves visitors can enter in the National Monument with varying levels of difficulty.

If you plan to enter any of the five caves, you’ll need a permit to do so. To protect the bats that call these caves home, you have to certify you aren’t wearing clothes that have been inside a cave system or mine since 2005. Since that year, bats have died in alarming numbers from White Nose Syndrome, a fungus that’s lethal for bats and transported by humans from one mine or cave to another.

Permits are free and must be displayed on the dash of your car to show you’ve been through the screening process. It’s simply a bat stamp on your brochure.

Caves are delicate environments, and it is necessary to tread softly and use the highest level of Leave No Trace. Wear appropriate attire when exploring caves like helmets, long sleeve shirts and pants, closed-toe shoes, and flashlights with extra batteries. There are cave maps at the Cave Area trailhead for more detailed information on each cave. Try and refrain from eating in the caves as crumbs can attract unusual visitors to the cave. 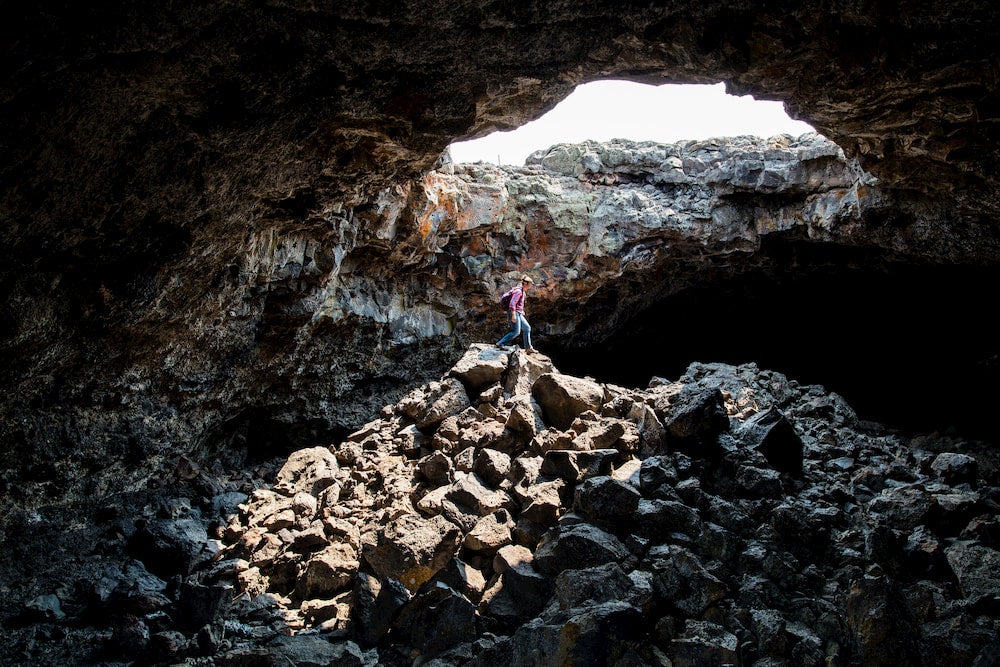 As the easiest cave to access, Indian Tunnel sees the most visitors. Stairs descend into the tunnel which extends 800 feet below the surface of the earth. You can hike the length of Indian Tunnel and ascend on the other side, walking back to the entrance by following a series of poles.

Dewdrop Cave is moderate and first cave you come to on the path to Indian Tunnel. The entrance to the cave is evenly spaced, but once in the cave turns rocky and uneven. 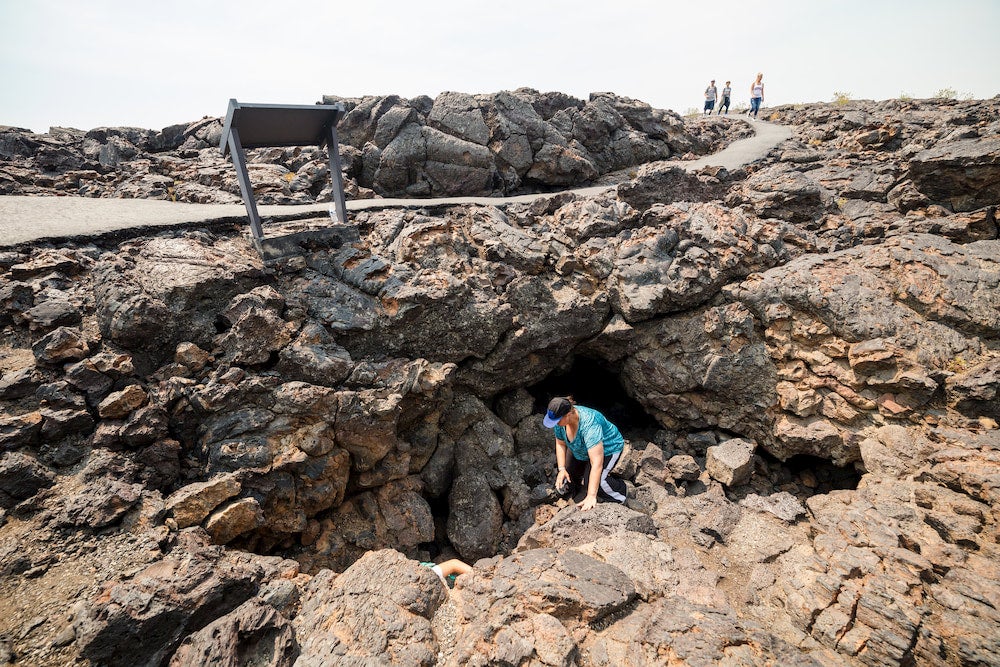 Climbing down to the entrance of Boy Scout Cave. Image from NPS / Jacob W. Frank

Situated along the Broken Top Trail, Buffalo Cave is rated as difficult with a tight and rocky entrance combined with low-ceilings throughout. 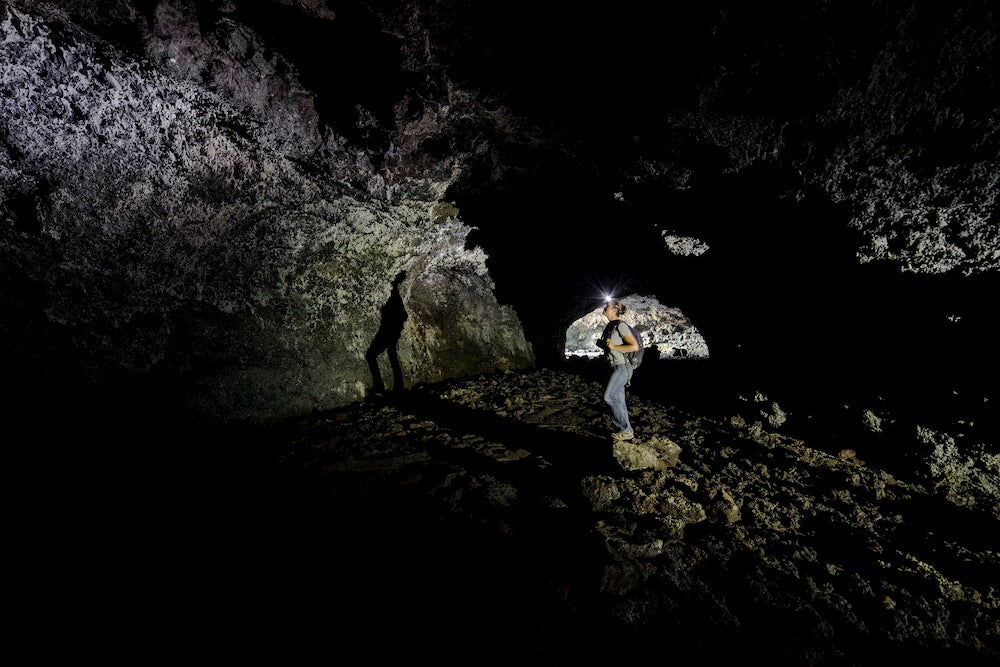 A caver explores the inside of Beauty Cave. Image from NPS / Jacob W. Frank

Similar to Dewdrop Cave, Beauty Cave has an open, bouldered entrance which offers moderate access. It’s located at the end of the left-fork of the cave area trails.

Where to Eat Near Craters of the Moon

Arco, Idaho is the closest town to Craters of the Moon and should have everything you need for your trip. Pickle’s Place is popular for burgers and fried pickles, and the Lost River Drive-In serves ice cream and other drive-in favorites like burgers and grilled chicken sandwiches.

The only grocery store in town is A & A Market which has all the essentials, but we recommend you stock up on groceries in Idaho Falls, Twin Falls, or Boise, depending which way you’re driving into the National Monument.

Camping Near Craters of the Moon, Idaho

Camping around the national monument can vary depending on what you’re looking for; there are full-amenity camping resorts just as far from There are both free and paid camping options near Craters of the Moon, Idaho. 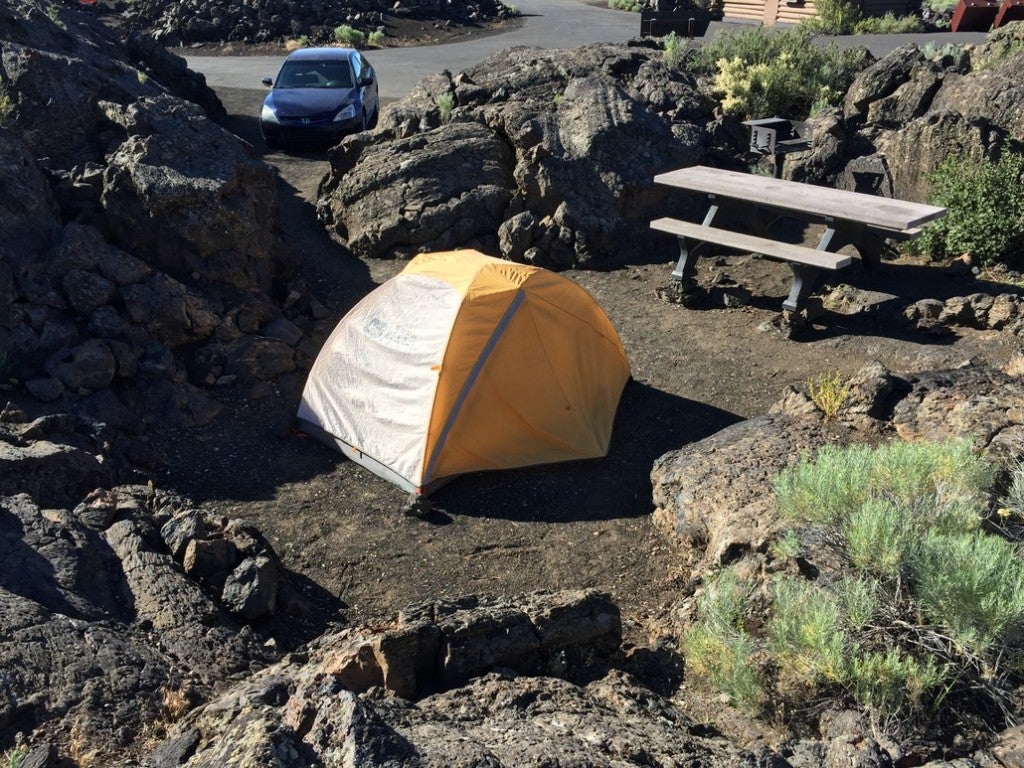 Lava Flow Campground is the only option within the boundaries of Craters of the Moon. There are 51 sites available, with a limited number able to accommodate larger rigs like travel-trailers and motorhomes. All are first-come-first-serve and are relatively primitive. There are no showers, hook-ups, or waste-water dump, but for $15/night ($8 in the shoulder season), it’s worth it for a unique camping experience among lava flows.

“This is what you would expect in the wilderness of Idaho! A unique location, and an experience worth having!” – The Dyrt camper Jake G.

Craters of the Moon, Arco KOA 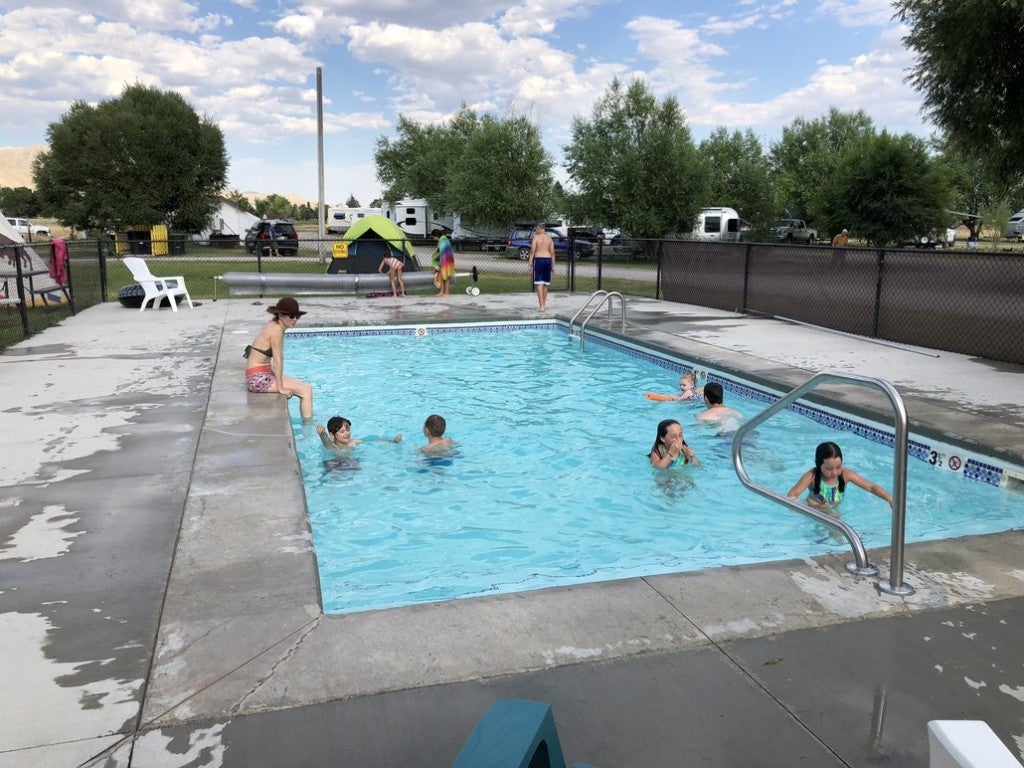 Set back from the town of Arco, Craters of the Moon KOA offers a nice respite after a day of hiking in the National Monument. There’s a heated pool available and the staff does an Ice Cream Social from 6:30-6:45 each night under the patio by the laundry room. In the morning, there are free coffee and waffles available in the camp store to sweeten the deal! Sites are nice and shaded and there are pull-through, back-in, tent, and cabin options.

“Has most of the usual KOA amenities: clean bathrooms, pool, cabins, full hookup RV spots, and a few tent spots. Even has a couple of teepees. Very friendly staff and a well stocked store/deli.” – The Dyrt camper Jeff P. 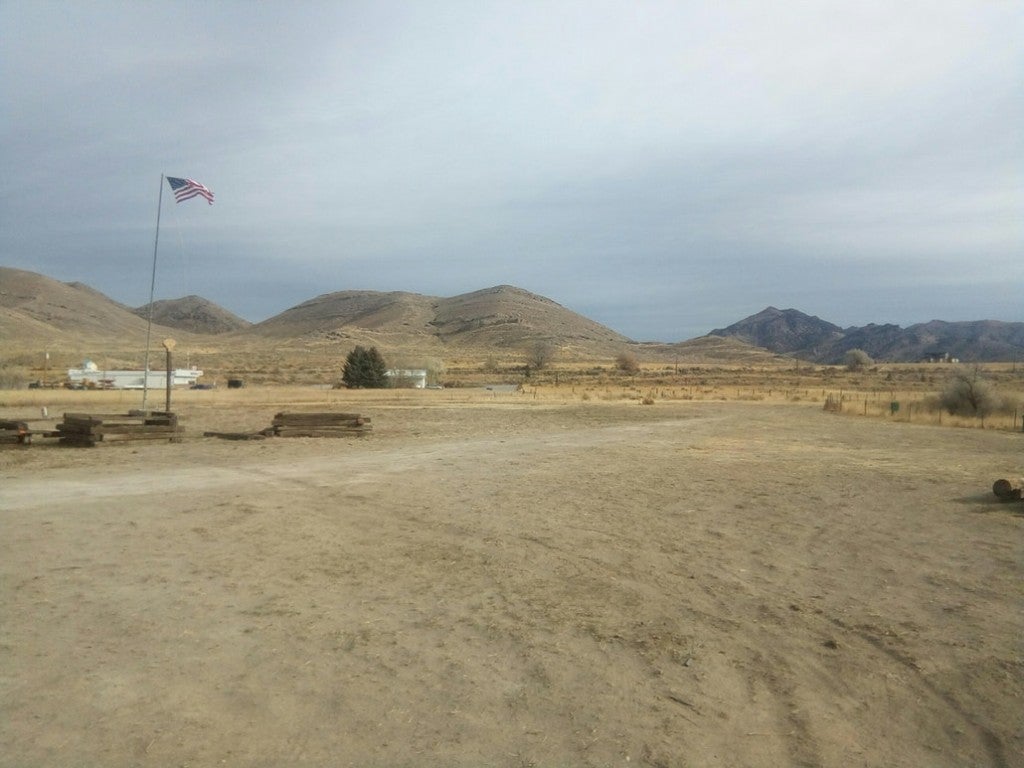 One of the nice perks of Arco is Honey’s Free Dry Camping which is located next door to the KOA. There are no amenities here so you’ll need to be entirely self-contained. Otherwise, there’s a gas station nearby to use the bathroom or get coffee and snacks. The owners are friendly, but their dogs have allergies so don’t leave food out or available.

“It’s a free campground ran by a disabled vet. He can’t and won’t charge anyone, though lately has been allowing donations to pay it forward and help with things like recovering the power installation etc.” – The Dyrt camper Scar S. 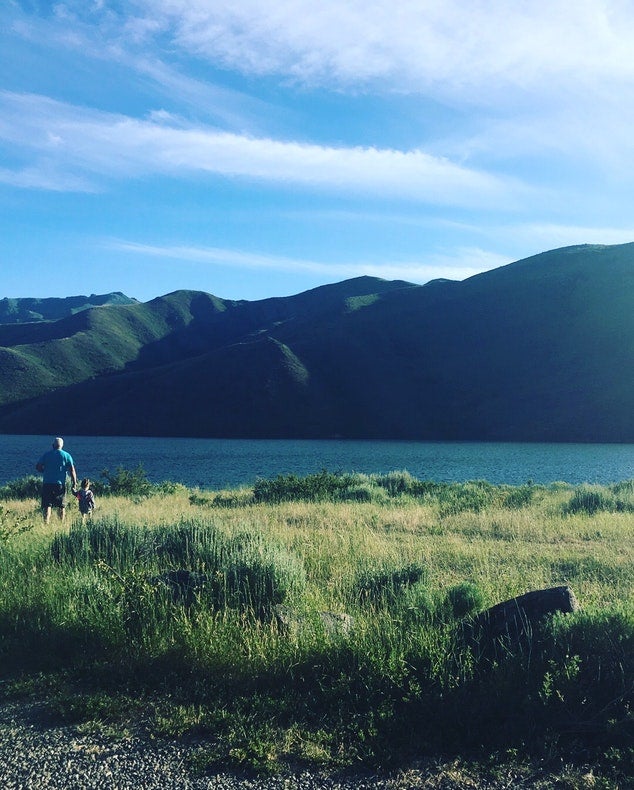 Run by the Bureau of Reclamation, Little Wood River offers primitive camping and excellent fishing about 40 miles from Craters of the Moon. These remote sites are a great option to stay before or after visiting the National Monument as they’re located up a dirt road and take roughly an hour to travel to from the monument. The site is well cared for and a great respite.

“Easy fishing access and remote camping. Not much for man made improvements, the camping is very primitive.” – The Dyrt camper Ryan V. 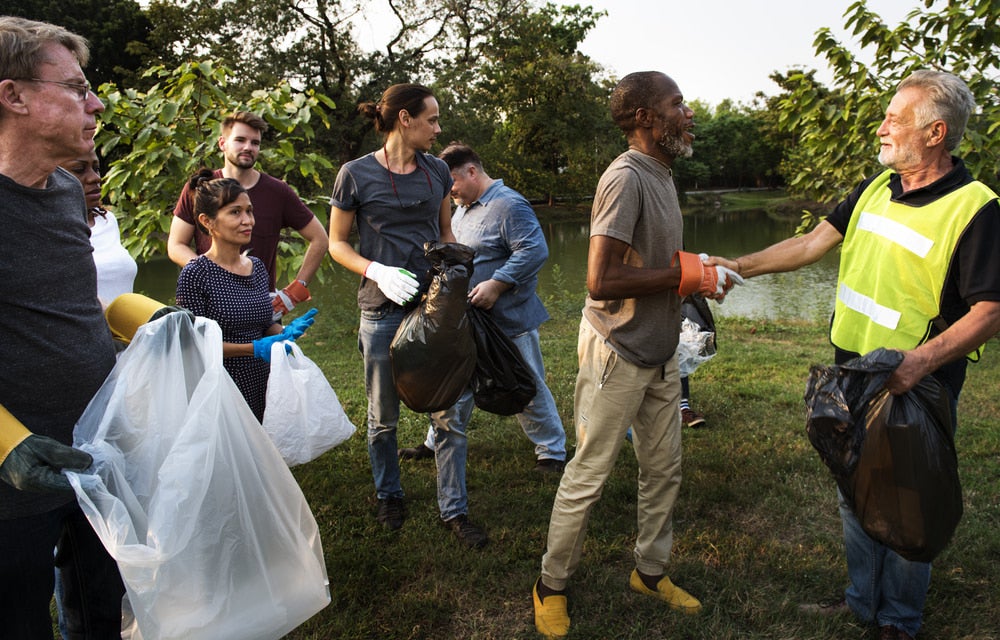 Want to Work Outside? Look to Environmental Nonprofit Jobs

Even the most dedicated and intrepid adventurer has limits to their outdoors lifestyle while trying to balance, well, the rest of life. When evenings and… 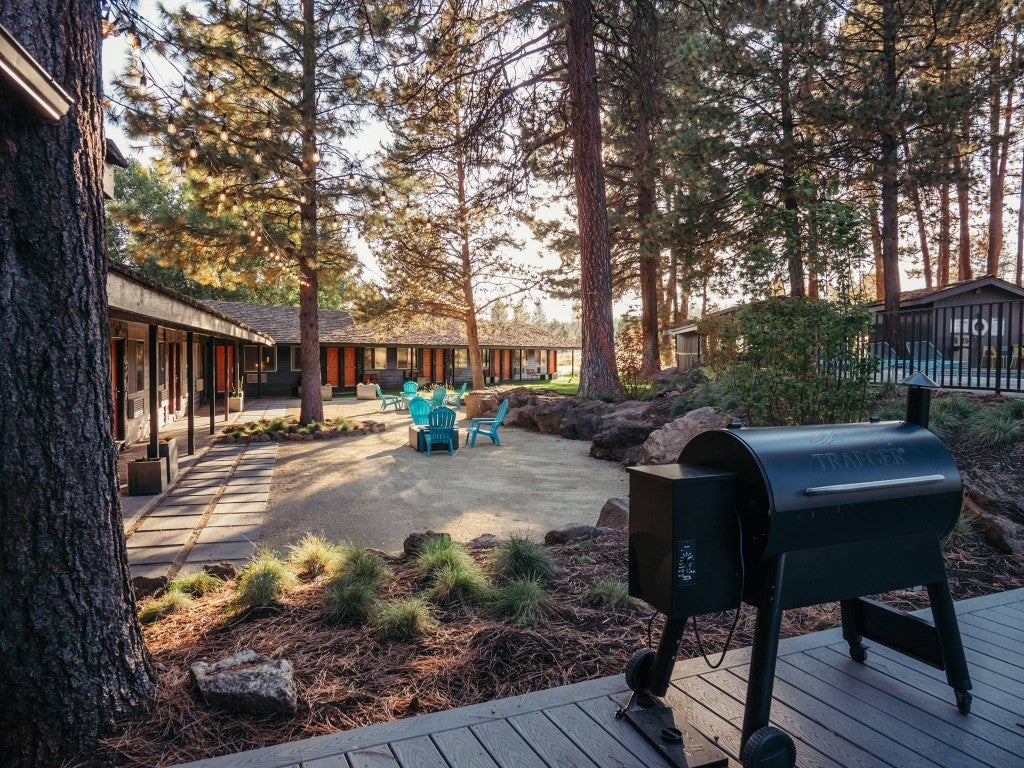 How LOGE is Converting Old Buildings into Hostels and Campgrounds

As campers, most of us can get on board with secluded nights in the tent, camper, or RV. But sometimes it’s nice to post up…