Soak Up the Old West at These Cody, Wyoming Campgrounds

This article was brought to you by our friends at Gregory, the makers of outdoor backpacks rugged enough for the storied Wyoming backcountry. With generous pack sizes and extra features like water reservoirs, you can enjoy campgrounds in Cody, Wyoming and won’t have to worry while exploring the same frontier beloved by Buffalo Bill Cody.

Colonel William F. Cody was already famous as “Buffalo Bill”— the larger-than-life personality behind the world-famous Wild West show—when he settled in a corner of Wyoming that would eventually bear his name. Cody was coming off a rocky series of investments with the Shoshone Irrigation Company, but continued to work with them on the even bigger project of developing a whole town in Wyoming.

How Cody, Wyoming Became Synonymous With the West

Buffalo Bill’s vision for Cody was essentially an extension of his traveling show, a tourist town on the edge of the country’s first national park, designed to give Easterners a taste of life on the frontier. He built three magnificent hotels in the area, including the Irma Hotel in downtown Cody. The Irma attracted international attention, even receiving its beautiful cherrywood bar as a gift from Queen Victoria.

Visitors came from all over the country and the world to see Buffalo Bill’s Old West for themselves on their way to Yellowstone, to stock up for hunting expeditions, and go on guided tours of the region. Buffalo Bill didn’t expect Cody to survive on tourism alone, however. He worked with private companies and the federal government to establish mining and oil drilling in the area, as well as the construction of the Buffalo Bill Dam— then the highest dam in the country.

Soon, Cody began to grow from a tiny town of 500, when Buffalo Bill first arrived, to a population of 10,000 today. As is often the case with growing, bustling towns, Cody took on a life of its own. Two years after Buffalo Bill’s death in 1917, an annual memorial rodeo was established called the Cody Stampede. During the Great Depression, the Cody Nite Rodeo was added to the town’s entertainment calendar. Ever since, Cody has been known as the Rodeo Capital of the World, with some kind of rodeo show happening every single day of the year.

Experience Life in the Old West at these 7 Cody, Wyoming Campgrounds 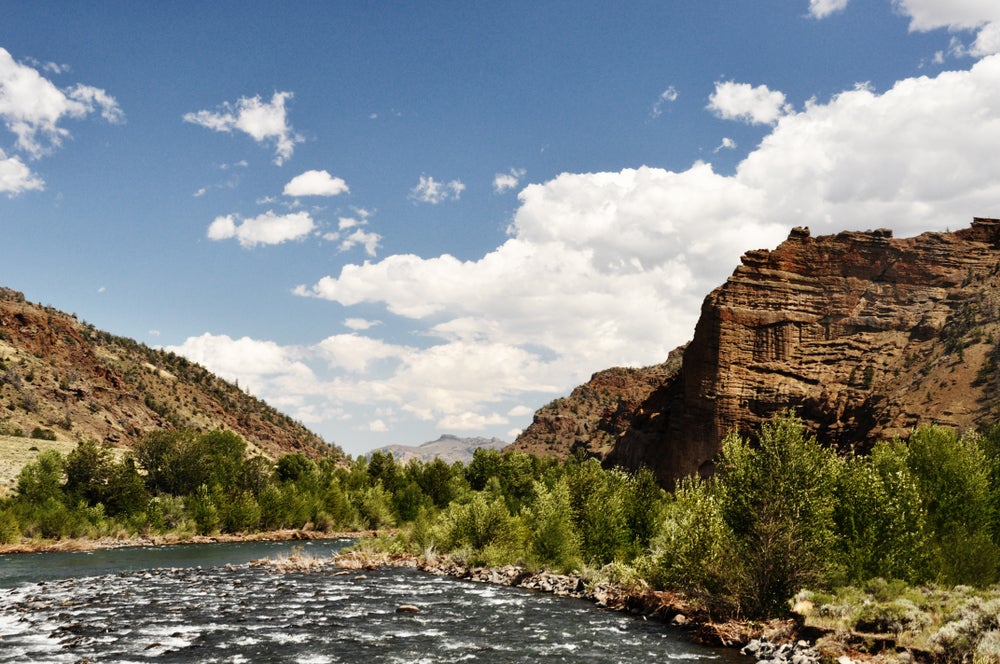 Buffalo Bill Cody once wrote, “the West of the old times, with its strong characters, its stern battles and its tremendous stretches of loneliness, can never be blotted from my mind.” Just as he intended, that spirit of the old west lives on in the town he loved so well.

You aren’t limited to staying at the Irma, however, if you want to explore Cody for yourself. There are numerous Cody, Wyoming campgrounds to explore, both in and around the town as well as on the Buffalo Bill Cody Scenic Byway that stretches from Cody to Yellowstone National Park. If Yellowstone or the Tetons prove too crowded, Cody, Wyoming campgrounds will often still have space— especially for tent campers.

Right in downtown near the rodeo grounds, few other Cody, Wyoming campgrounds can beat Ponderosa on convenience. You’ll also be just half a mile from the Buffalo Bill Center of the West, a complex of five museums and 50,000 artifacts where you can learn about wide-ranging western subjects from Colonel William F. Cody’s epic life to the culture and legacy of the Plains Indians to Wyoming’s natural history to one of the largest collections of firearms in the country.

Ponderosa Campground is just as diverse in its own way, with tent sites, big rig-ready pull-through sites, heated cabins, and tipis. They can arrange a river rafting trip for you, get you hooked up to satellite TV, stock your camp pantry for the weekend, or serve you up a Cowboy cappuccino.

“We could (and did) walk to downtown and the Buffalo Bill Museum. I woke up and went running along the river. We didn’t spend much time in our campsite by design and it worked out great. There wasn’t much road noise despite being right on the main thoroughfare. The souvenir ship/main office was nice. I would recommend.” –The Dyrt camper Erin S.

KOA’s are always reliably packed with amenities, and the Cody KOA is no exception. It has niceties like a heated pool and hot tub, play area for the kids, dog park, and WiFi. And though it’s just outside of Cody, it’s still super easy to get around. For one, Cody isn’t exactly a sprawling metro area. For another, the Cody KOA offers bike rentals and a free shuttle to the rodeo.

Not only can you check out the Buffalo Bill Center, the Irma, and the rodeo, you can also pay a visit to the Heart Mountain Visitor Center, one of the camps where Japanese-Americans were detained during World War II.

You’ll also be conveniently located to loads of other area activities like whitewater rafting or fly-fishing along the nearby the Shoshone River.

“Great staff! Very clean! Easy access for people just passing through, just off a main road. They offer free pancake breakfast in the morning and a very cute store with almost every necessity for campers.” –The Dyrt camper Brittany S.

Photo from The Dyrt camper A P.

Cody, Wyoming isn’t the only thing named after Buffalo Bill around here. In the state park that bears his name, overlooking the similarly eponymous Buffalo Bill Reservoir that was formed by the construction of the Buffalo Bill dam, visitors might start to notice a theme. If you want easy access to all the fun attractions in Cody (it’s just ten minutes away), but also want to savor the Wyoming landscape, Buffalo Bill State Park is a great place to start.

Like much of Wyoming (and the rest of the Great Plains, for that matter), shade and shelter from the wind aren’t plentiful here, so pack accordingly if you plan on tent camping. RVers will find generous sites with hookups, however. Boat enthusiasts, kayakers, and paddle boarders will appreciate the launch on site, too.

“This was a great stop on a national parks trip in the Wyoming area. The campground was less busy than in the national parks. Sites were clean and large. Prices were outstanding compared to other parks near. I would definitely come back here if visiting Yellowstone again.” –The Dyrt camper Sara S. 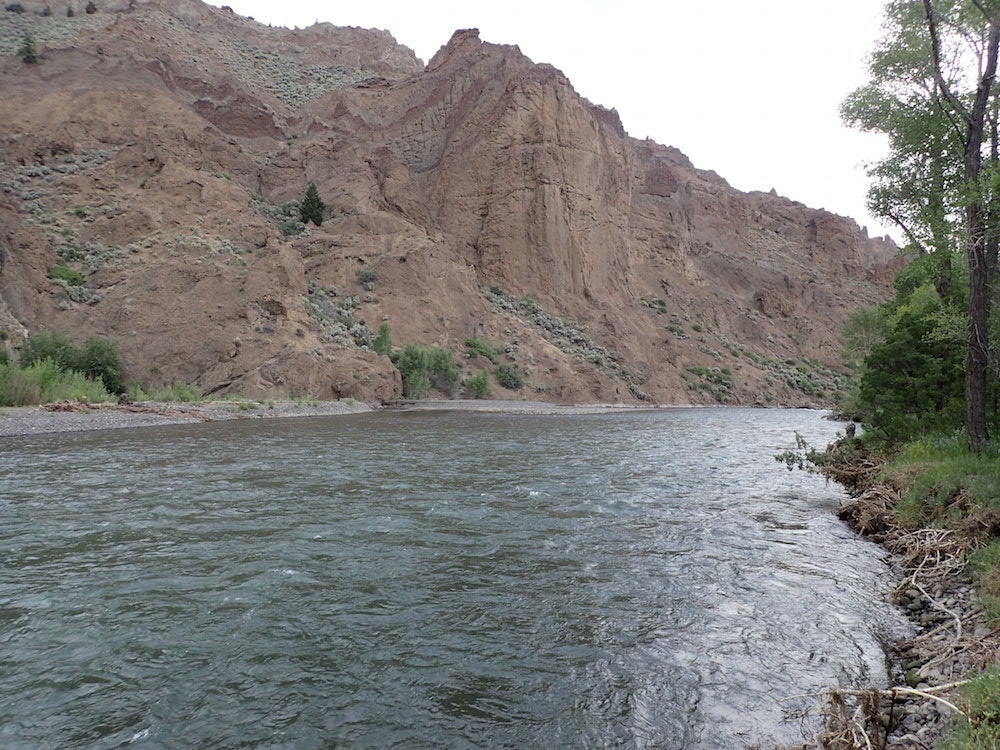 This Cody, Wyoming campground is named not for Buffalo Bill, but for the Shawnee word for elk. That’s quite apropos for a place so rich in wildlife and outdoor activities. Visitors flock to the North Fork of the Shoshone River for fly-fishing, thanks to an abundance of rainbow and Yellowstone cutthroat trout. You might also catch a glimpse of not only wapiti, but also grizzly bears, deer, bison, moose, foxes, coyotes, and bald eagles.

Wapiti’s 42 campsites are almost halfway between Cody and Yellowstone, and is also the location that Buffalo Bill chose for his own hunting lodge. You can visit the nearby Pahaska Tepee he built as a sister to the Irma Hotel, a classic destination in and of itself. Other nearby activities include horseback tours, zip lining, and cross-country skiing.

“Stones throw from Yellow Stone’s east gate. Relaxing river sounds glowing by. Lots to see and do in nearby Cody, WY. Clean campgrounds and bathrooms. Paved drive. Really well kept for being FREE! There is a trail following the river beyond the bridge at the back of the campground, somewhere on the trail we found a geocache! Fire pits and picnic tables at each site.”–The Dyrt camper Aaron Y. 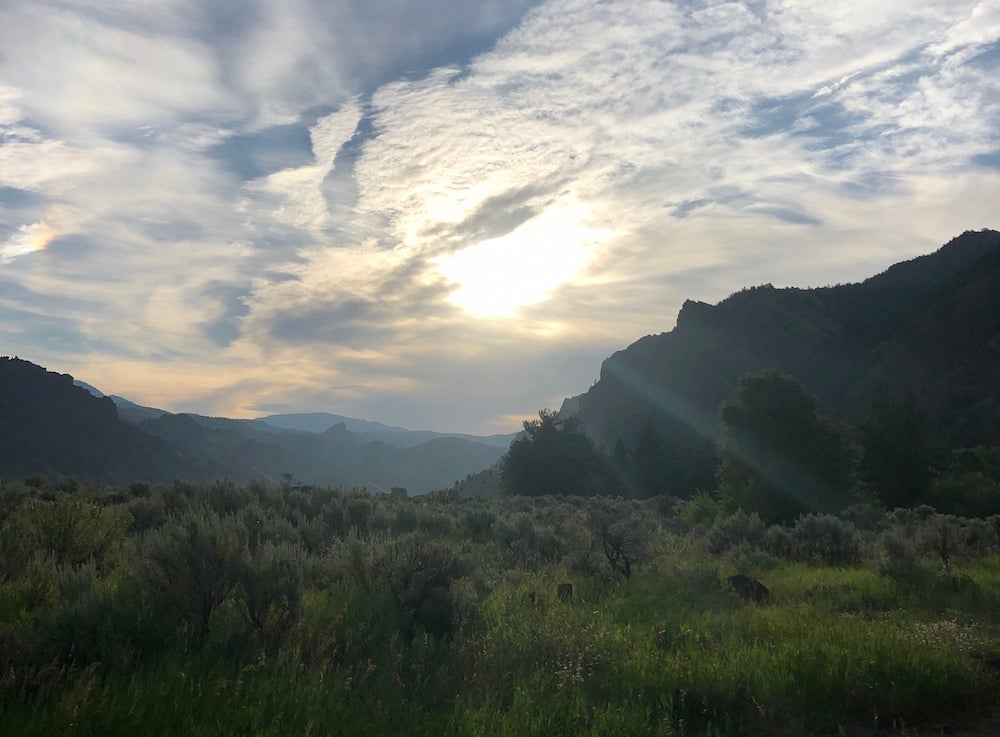 If you aren’t alone in wanting to soak up the Old West, bring your crew to this Cody, Wyoming campground. Clearwater campground has room for groups of up to 50. There is some shade to be had, and nice, brand new fire pits and picnic tables. Don’t count on cell phone service, however, or ADA accessibility. Clearwater is beautiful, but you are definitely in rural Wyoming.

As one might expect near the rodeo capital of the world, there’s nothing quite like exploring Wyoming on horseback. Elk Fork makes that easy with equestrian amenities including horse corrals and special parking for horse trailers. And each of the sites at this campground is close to the trailhead itself, making it an ideal launching point for a backcountry adventure.

That’s not the only thing that makes this Cody, Wyoming campground unique. Elk Fork is also open year-round, a rarity among other Shoshone National Forest campgrounds. That means you can follow the Elk Fork trail into the Washakie Wilderness and Absaroka Mountains whenever the whim and good weather strike you. Just don’t forget to stock your outdoor backpack with plenty of water and trail snacks!

“There’s a corral and access to good hiking and riding from the campground. Elk Fork only has about 8 sites so it’s extremely low key and often has sites available when campgrounds are full. Also, it allows tent camping, which isn’t allowed close to the Park. There’s no potable water so bring your own!” –The Dyrt camper Gretchen B.

Another popular Cody, Wyoming campground sitting along the Buffalo Bill Cody Scenic Byway, Big Game is close to the Shoshone River, Yellowstone, the Tetons, and the Washakie Wilderness. Perhaps the most exciting thing to see near Big Game Campground is the Smith Mansion just five miles up the road.

This mysterious five-story structure was built by Francis Lee Smith, a local engineer. While all sorts of legends abound about the purpose of the building and it’s strange architecture, it was intended to be nothing more than a family home, constructed by hand from local materials like lumber salvaged from Rattlesnake Mountain. Tragedy struck, however, when Smith fell from one of the balconies while working on a section of the roof. He died working on his masterpiece.

His daughter Sunny Smith Larsen is currently trying to raise money to have her childhood home, now in disrepair, turned into a museum. Stop to take pictures, but keep a respectful (and safe!) distance— Leave No Trace applies to the Smith Mansion as much as the prairie around it.

“Close to Yellowstone, but just far enough away if you know what I mean. Super nice Camp Host there to answer any questions for you about the area. It’s a small campground, but affordable. $10 per night ($5 with an interagency pass) up to a 16 night stay. Nestled in the canyon outside of East Yellowstone. Fire pits, 2 pit toilets, and bear proof food boxes. Grizzly country, bring your bear spray.” –The Dyrt camper Natasha S. 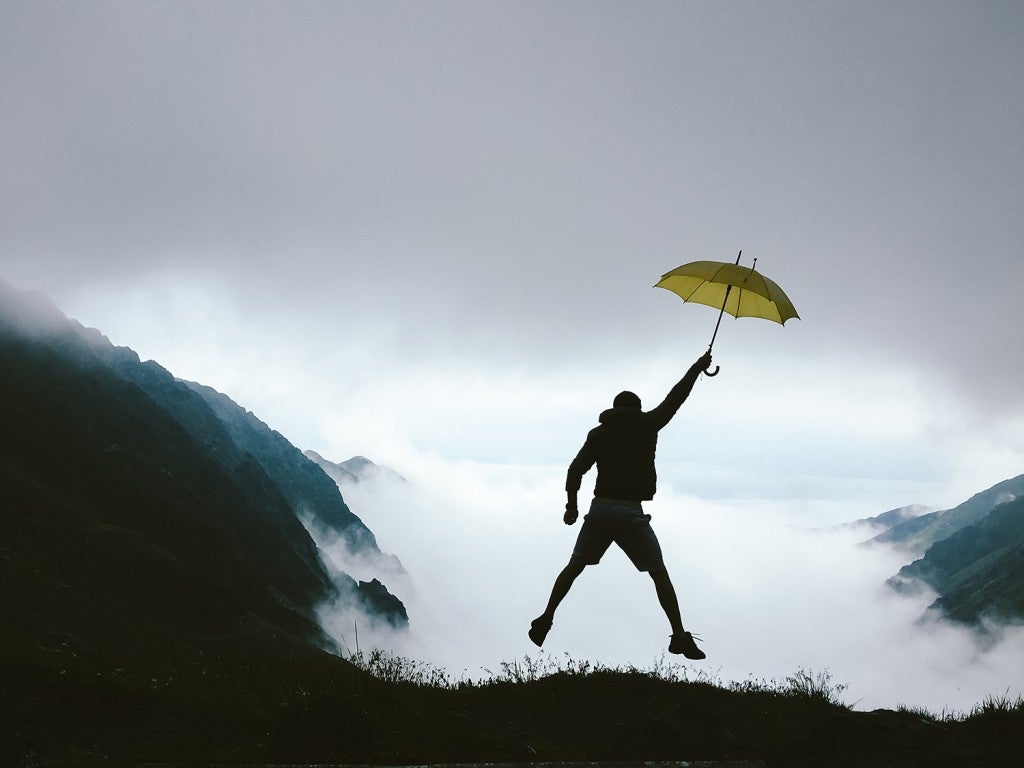 After 2,000 Miles of Hiking, An Umbrella is My Favorite Piece of Gear

Have you ever been on a rainy hike and thought to yourself, “Why do I even bother with a rain jacket?” Even the most high-quality… 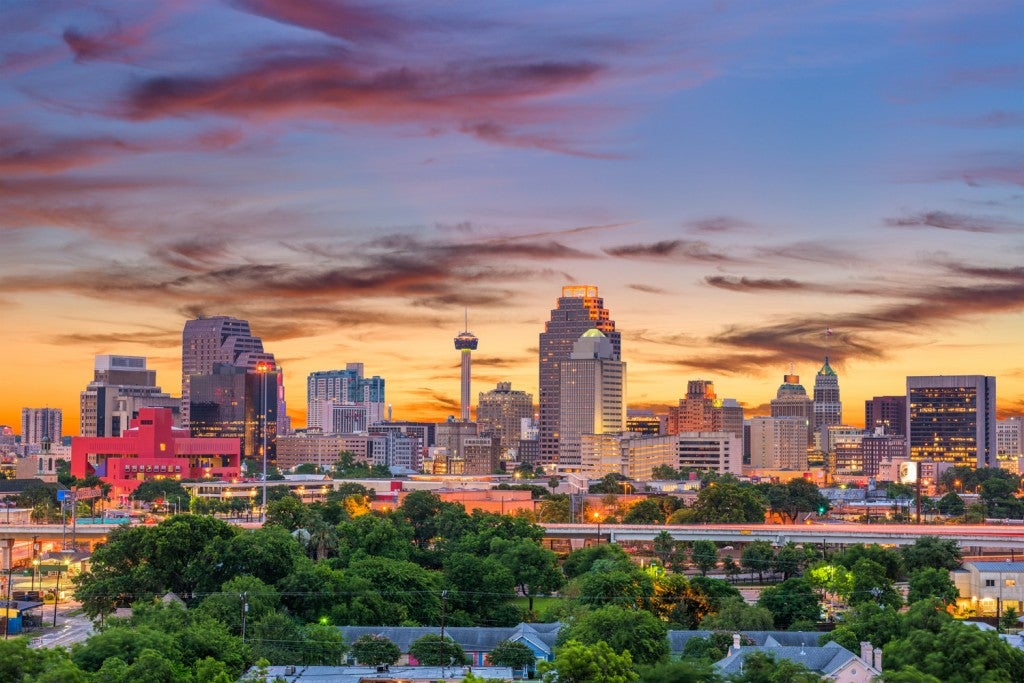 This guide to San Antonio camping was brought to you by Gregory, the maker of water reservoir backpacks designed to help you stay hydrated in hot environments…