Did You Know You Can Ski & Snowboard in Yosemite? 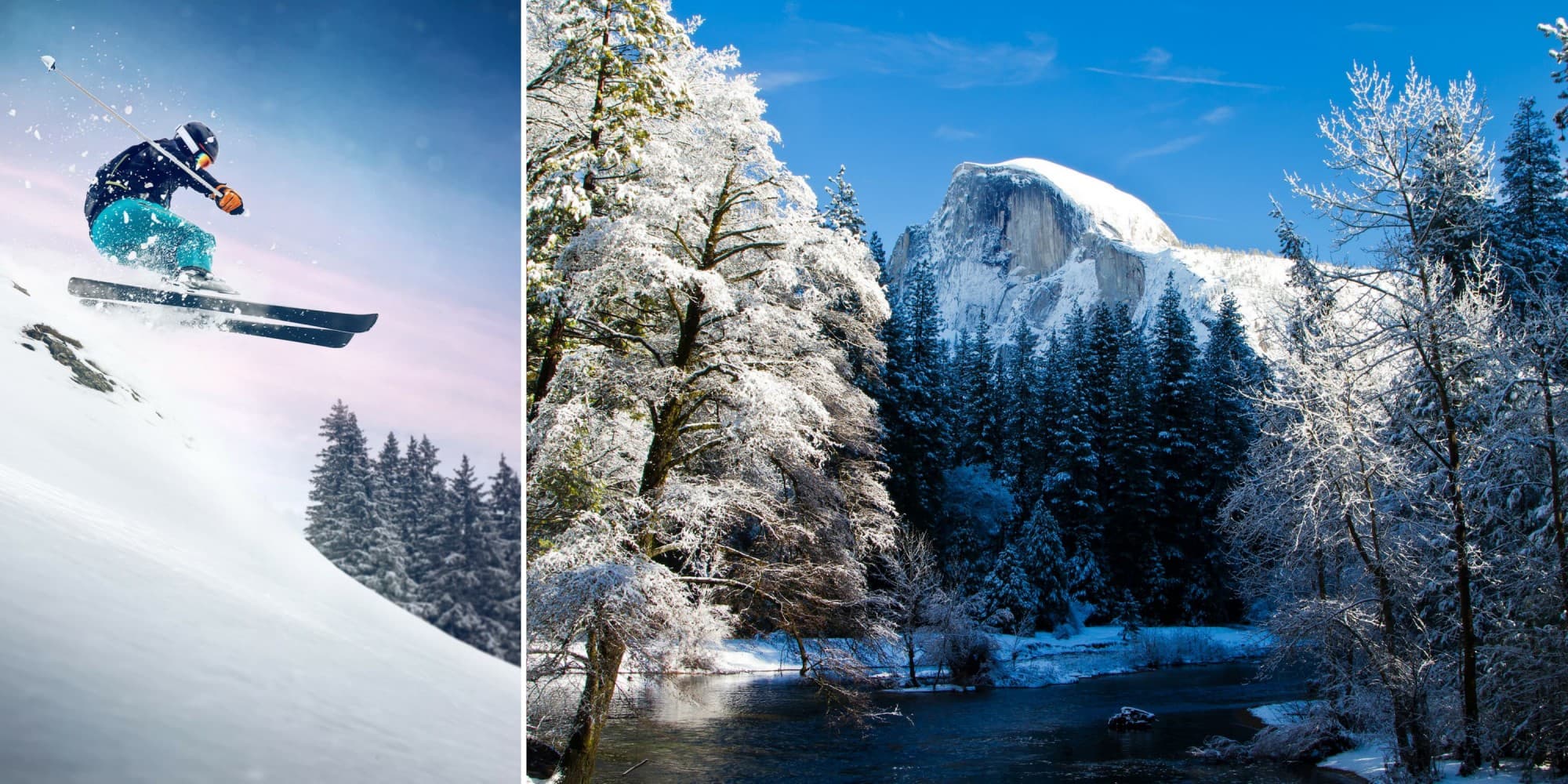 This guide to Badger Pass is brought to you by our friends at Aftershokz, whose sport headphones are the perfect way to listen to music and stay safe on the slopes.

Of the 58 National Parks in the United States, there are only a handful that get enough snow to allow for winter sports. Among the ones that do, even fewer offer downhill skiing within park boundaries. In fact, there are only 3 National Parks in the country that have a designated ski area featuring a fully functional mechanical lift. Of those 3, only one can claim the title as the oldest downhill ski area in the state of California. 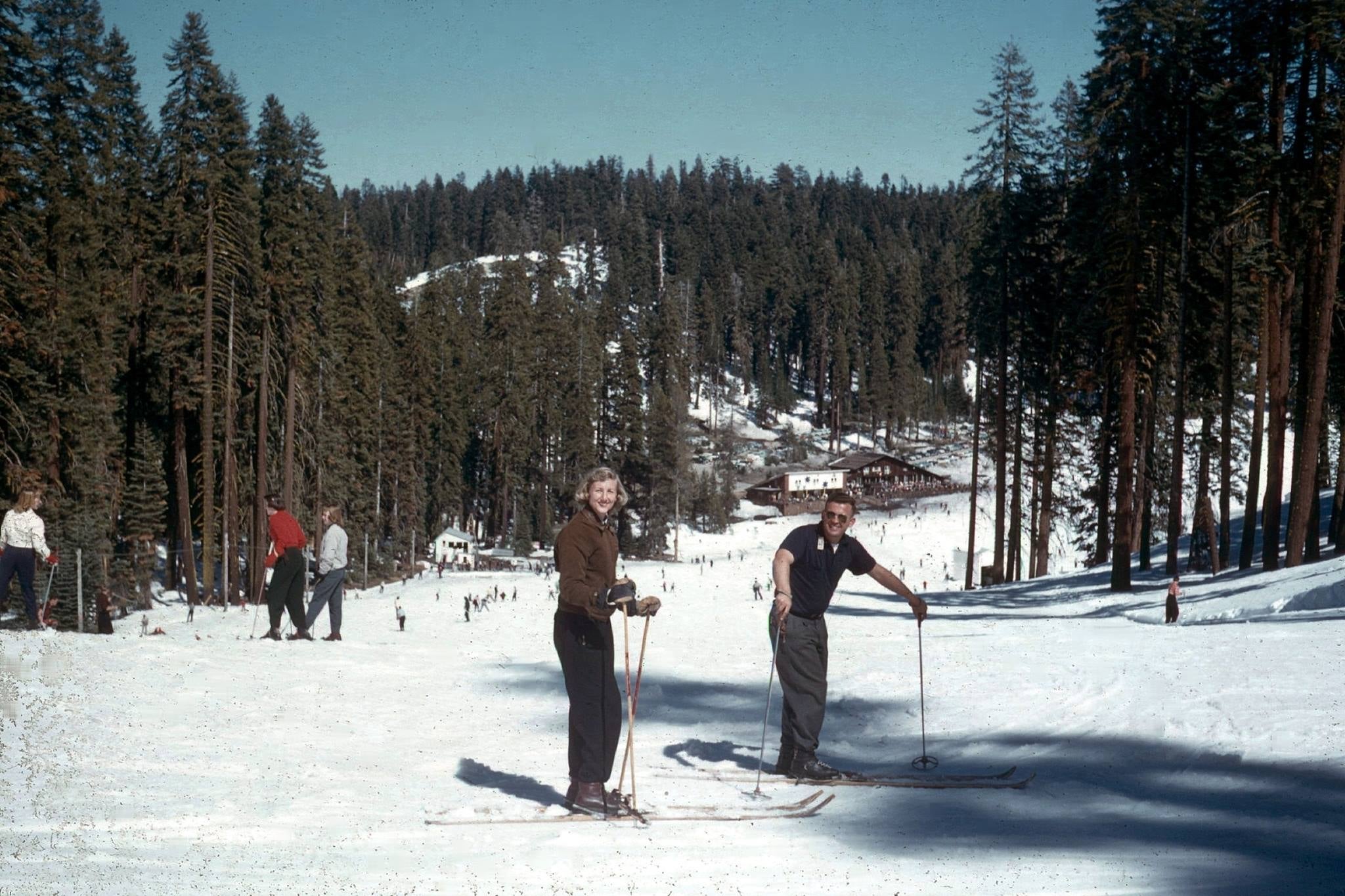 Recently renamed the Yosemite Ski & Snowboard Area, this little-known ski spot is located in the heart of the famous Yosemite National Park. Established in 1935, Badger Pass bears the distinguished title of being the oldest ski resort in California.

The skiing history of Yosemite is one of small beginnings, starting with a miniature ski hill and jump near the historic Tenaya Lodge in 1928, originally established to support the budding ski school led by Swiss skier Jules Fritsch. The skiing scene remained inconsistent, but when the 1932 Olympics were set to be held in Los Angeles, interest in nearby Yosemite’s winter sports was boosted significantly. Though the winter sports for the 1932 Olympics did not end up being held in the National Park, the founding members of the Yosemite Winter Club saw the need for a more organized approach to snow sports in Yosemite, including the construction of fully developed facilities. By 1933, the first ski lift was installed at Badger Pass in the form of a large, cable-rigged sled that hauled skiers up the hill in groups of six.

Later, with the improvement of Glacier Point road and the construction of Yosemite’s first ski lodge, Badger Pass began to garner its current status as Yosemite’s premier ski area, attracting visitors from all over the world and hosting upwards of 25,000 skiers in the third season after its opening.

Badger Pass at a Glance

The ski area is typically open from mid-December to the end of March, depending on snowfall, and lift ticket prices are among the friendliest in the country, with season passes ringing in at less than $200. Student passes are $109 for the duration of the winter.

The Yosemite Ski and Snowboard Area also boasts a huge variety of activities aside from skiing. Since Glacier Point road is open only up to Badger Pass in the winter, the closed portion of the road beyond the resort is available for access to some of the country’s best cross-country skiing, snowshoeing, and even skate skiing.

Skiing For All Ages 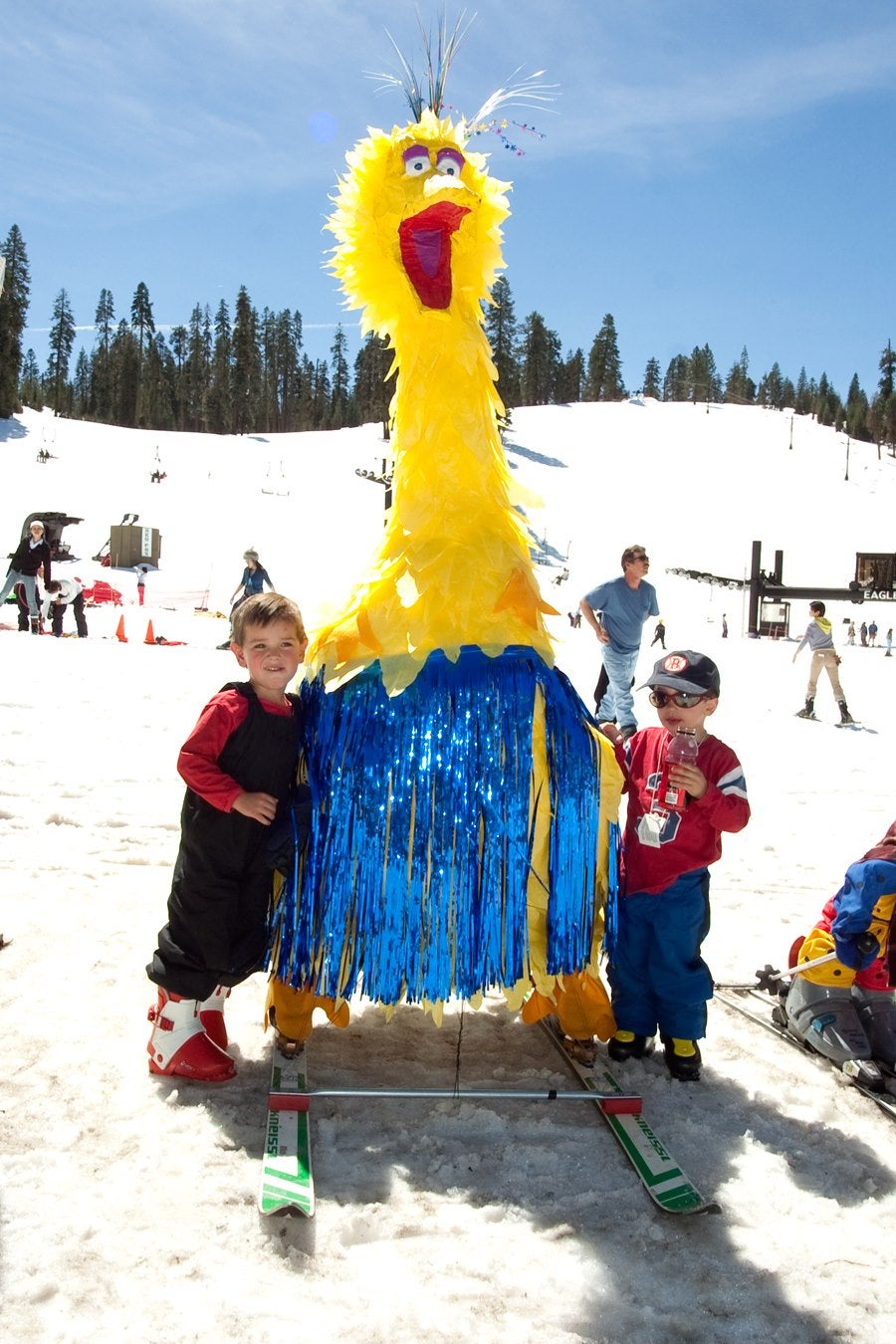 Today, the small resort offers an array of terrain for those with and without experience. Despite being only 90 acres, there are a total of 10 spectacular runs, ranging from rolling greens to a couple of technically-tough black diamonds, with around 50% of the runs located in the intermediate range. Though small, Badger Pass offers ski and snowboard classes for kids, as well as a terrain park for those seeking the high-adrenaline path down the mountain.

The Yosemite Ski and Snowboard area is known for being as family-friendly as it is beautiful. Each run at the resort leads to a single base, which makes it an ideal place for families looking for a safe, easy way to keep an eye on their children. The area itself lacks the confusing network of runs that are often trademarks of larger resorts, and the lodge at the base of the hill has a perfect view of the entire lift area. 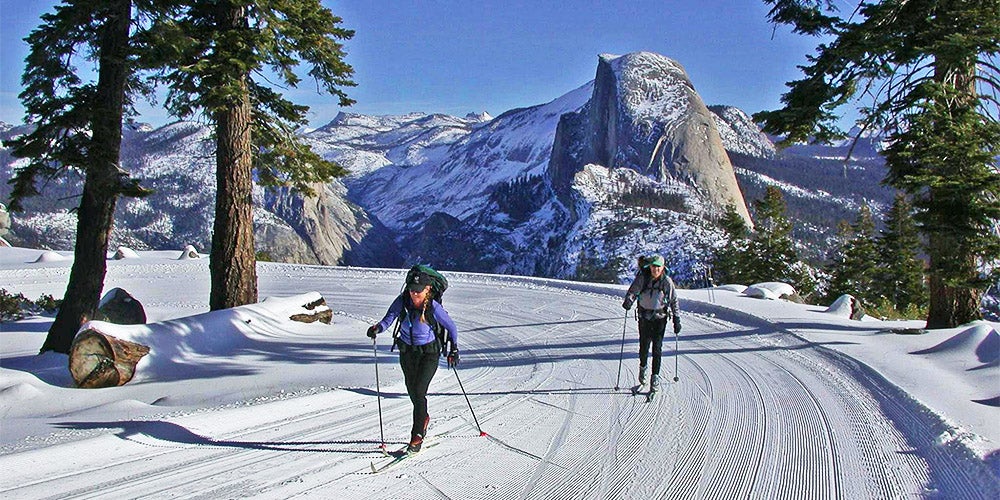 Backcountry skiing tours from Badger Pass to Glacier Point (21 miles roundtrip) are available almost every day, with a variety of options for completing the trek. For beginning cross-country skiers, guided overnight trips are available to Glacier Point, beginning from the Yosemite Ski & Snowboard Area Cross-Country Center. This well-known cross-country trip features a one or two night’s stay at the Glacier Point Ski Hut, one of Yosemite’s many spectacular backcountry accommodations, which includes dinner, a warm fireplace, a bunk bed room for up to 20 skiers, and breakfast and lunch for skiers on the way out.

For advanced cross-country skiers, there are a variety of options in and around the Yosemite Ski and Snowboard Area, including 90 miles of marked trails and around 25 miles of groomed track, which includes the 10.5 miles to Glacier Point and back. Though it’s not recommended for beginner cross-country skiers, advanced skiers often attempt the Glacier Point trip in a single day. The Glacier Point Ski Hut is also available for reservations for self-guided skiers looking to complete the overnight trip.

Looking for the perfect way to shred the slopes while still tuning into your favorite music? Our partners at Aftershokz offer bone conduction headphones that allow you to jam and remain aware of what’s going on around you. They’re the ideal way to enjoy yourself while remaining cognizant of every passing skier. Interested in learning more about how Aftershokz can help you revolutionize your next ski trip? Check out the Aftershokz blog, where one of their very own customers, a ski instructor in Ontario, Canada, tested and approved a pair of Aftershokz Trekz Air headphones while out on the slopes. 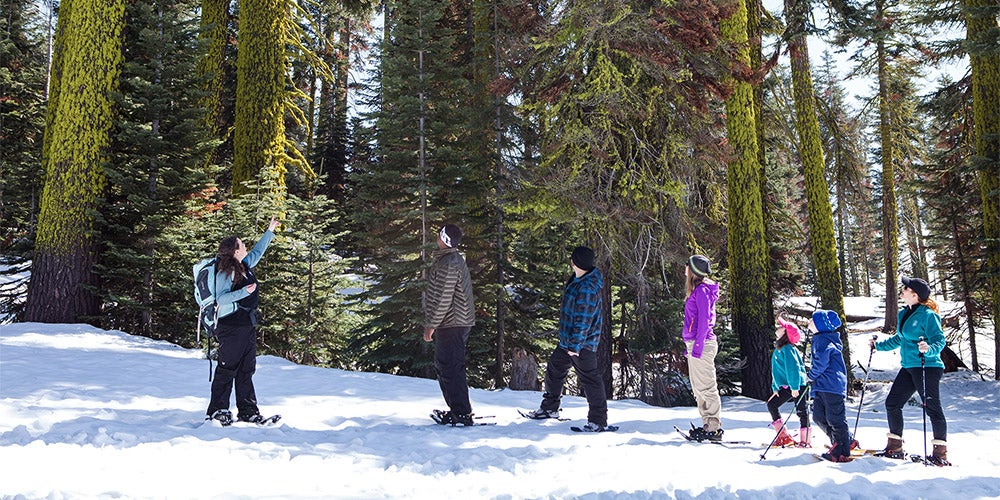 For snowshoers, the Yosemite Ski and Snowboard Area offers two guided tours that leave directly from the Nordic Center located onsite at the resort. The first tour, an Adventure Snowshoe Hike to Dewey Point, is offered on Sundays and Wednesdays throughout the winter. The hike itself spans across some of Yosemite’s most beautiful terrain, concluding at Dewey Point with snow-laden views of El Capitan, Half Dome, and the jutting peaks of the Clark Range. While the hike is friendly to those who know how to snowshoe as well as those without experience, due to the length and duration of the trip, participants must be at least 12 years old.

Along with the Dewey Point hike, Yosemite offers guests the chance to snowshoe under the light of the stars with the Full Moon Snowshoe Walk led by Yosemite’s very own naturalist guides. This family-friendly, light hike is scheduled for only a few days each month, so space is limited but it provides a wonderful opportunity to see the park in its nighttime form.

In addition to cross-country skiing and snowshoeing, the Yosemite Ski and Snowboard Area offers a tubing hill, where families can slide down the mountain without the stress of teaching the little ones to ski. Tubing is available in weather-dependent sessions of two hours each throughout the season, typically between 11:30 am and 1:30pm and 2:00pm and 4:00pm. At $17 a person, the tubing hill is an excellent choice for kids and adults of all ages.

A Brief Note on Safety

With the abundance of winter activities available in Yosemite, we’d be remiss if we didn’t mention a couple words on staying safe in the outdoors this winter. If you’re unfamiliar with any of the activities noted above, we highly recommend getting either a lesson or a guided trip on the books before taking your first solo adventure. Even if you think you can do it alone, it’s best to start with a group first, particularly if you’re planning on venturing into backcountry terrain, where trail markers and common paths are often obscured due to snowfall.

In addition to that, if you’re looking to keep yourself entertained while on the slopes and trails, we can’t recommend our friends at Aftershokz enough. While we can’t fully endorse obscuring your hearing with headphones (no matter how much we love to jam on the ski hill), we can endorse Aftershokz’s open ear headphones, which are the way to listen to music or remain plugged in to that “sick day” conference call (c’mon, we’ve all been there) while staying safe and aware of your surroundings.

Whether you’re visiting for the skiing, the backcountry camping, or the hot cocoa at the bottom of the hill, Yosemite’s Ski & Snowboard area is a rare must-do when it comes to winter activities in National Parks.

This post was brought to you by our pals at Aftershokz

Check out Aftershokz’s wide array of open ear headphones, perfect for the slopes and beyond. 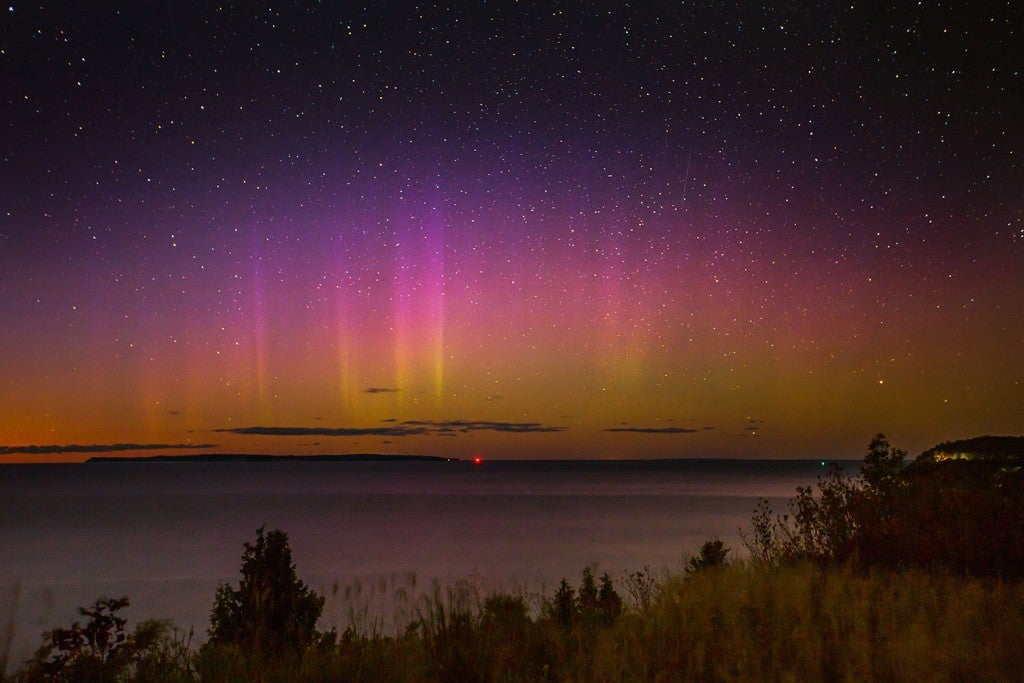 This post is brought to you by our backcountry cooking friends at Mountain House, whose freeze dried meals are the perfect warm companion for your… 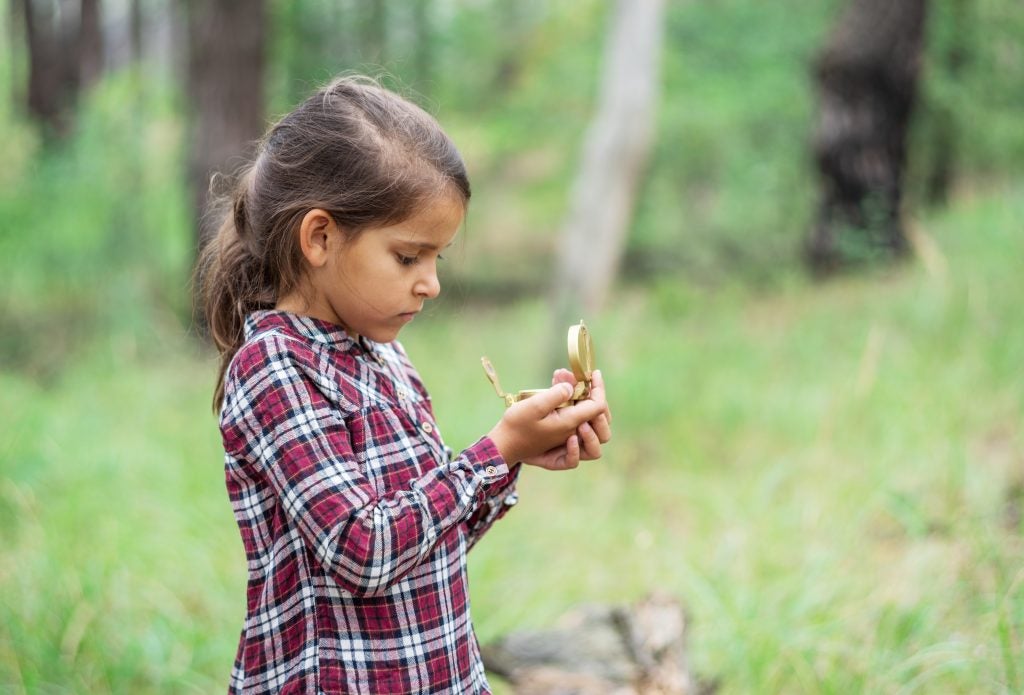 How to Geocache And Where to Start: A Coast to Coast Guide

This article on how to geocache is brought to you by Brunton, your go-to brand for outdoor compasses that are lightweight and compact for all navigational needs!…