See Space Launches At These Campgrounds Near SpaceX and NASA Bases

This list of campgrounds near space shuttle launch locations was brought to you by Mountain House, the trusted maker of freeze dried ice cream using the same technology originally developed for astronauts to enjoy dessert in space.

It’s been a big year for space. Just three days into 2019, China landed on the far side of the Moon. The following month, SpaceX launched an Israeli moon lander. And in July, India sent up the Chandrayaan-2 mission to the Moon. That was just after the 50th anniversary of the Apollo 11 space launch that landed humans on the moon for the first time in history.

If you missed these excuses to gaze up at the galaxies all around us from your favorite dark sky park, never fear. You can get an excellent view of both the night sky and thrilling space launches by camping near rocket launch sites that are open to the public.

NASA launch sites and SpaceX launch sites are dotted around the country and offer public calendars of when something new is taking off. Book your campsite ahead of time and you’ll not only be close to all the action, but you’ll also get to have the unique experience of sleeping under the same stars your fellow humans are exploring.

Sleep Near Space Launches at These Campgrounds

We rounded up the best campgrounds located near the Florida Space Coast (where Cape Canaveral and the Kennedy Space Center are located), Houston (home of the Johnson Space Center), Wallops Flight Facility in Virginia, and Vandenberg Air Force Base in California. While space launches can sometimes be delayed even just beforehand, go ahead and book a campsite for dates close to what’s on the NASA or SpaceX calendar. If worse comes to worst, you’ll still have a great camping trip. 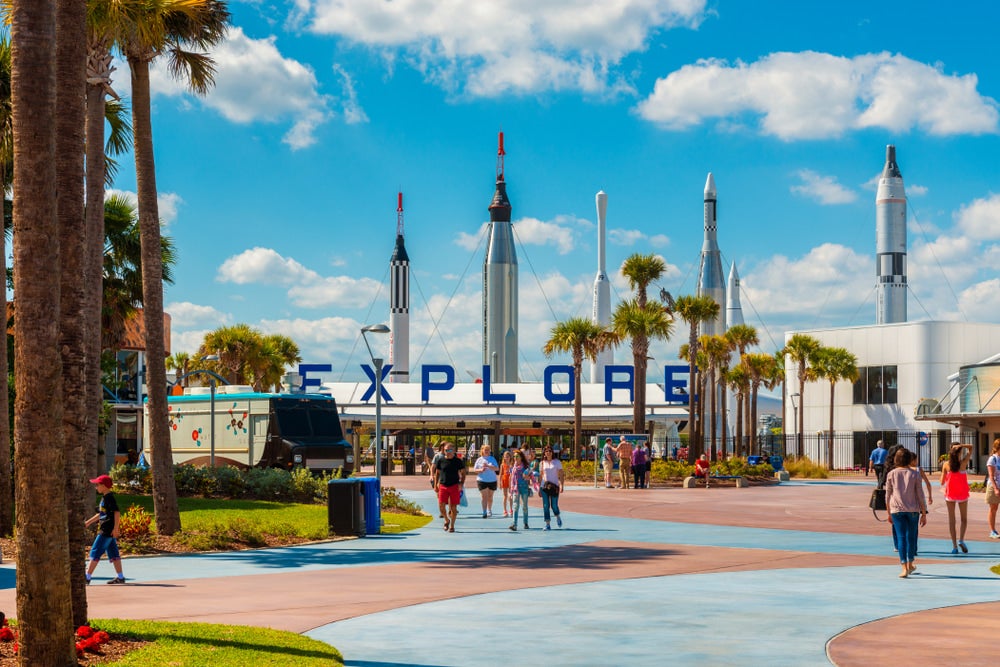 The entrance to the Kennedy Space Center Visitor Complex in Cape Canaveral, Florida. Image from Allard One / Shutterstock.com

The Florida Space Coast has been the setting for some of the most historic space launches of all time, because it’s where every manned NASA mission has launched, from the 1961 Project Mercury to the very last space shuttle flight in 2011. Cape Canaveral Air Force Station (CCAFS) opened in the late 1940s, and quickly became a preferred launch site for military rockets thanks to its proximity to both the Atlantic and the equator.

In 1962, NASA acquired land near Cape Canaveral to build a special launch site for its rocket operations as the space race tipped into high gear. Seven years later, the Apollo 11 rocket that put men on the moon launched from the Kennedy Space Center. In 1973, the Skylab space station took off from the concrete pad build almost a decade before on Merritt Island. In the decades since, even more history has been made here. And every time, people gather to see the rare sight of space launches that change the way we perceive the world and its limitations.

Of all the space launch sites across the country, Cape Canaveral is likely the most famous, and has the most for visitors to see and do. You’ll have a chance to learn about each of the Mercury, Gemini, and Apollo Shuttle missions, visit the U.S. Astronaut Hall of Fame, see retired spacecraft in the rocket garden, take a bus tour of the Kennedy Space Center, visit the Hubble Space Telescope theater, and more.

A fantastic spot to rest after all the action is Jetty Park, situated on the northeastern tip of Cape Canaveral, just south of the Kennedy Space Center. Tent and RV sites are available, as well as eight cabins equipped with queen size beds, bunks, mini fridges, and air conditioning. You’ll also have access to the fishing pier, and a camp store stocked with essentials so you don’t have to head back to the mainland in case you forgot, say, extra ice. 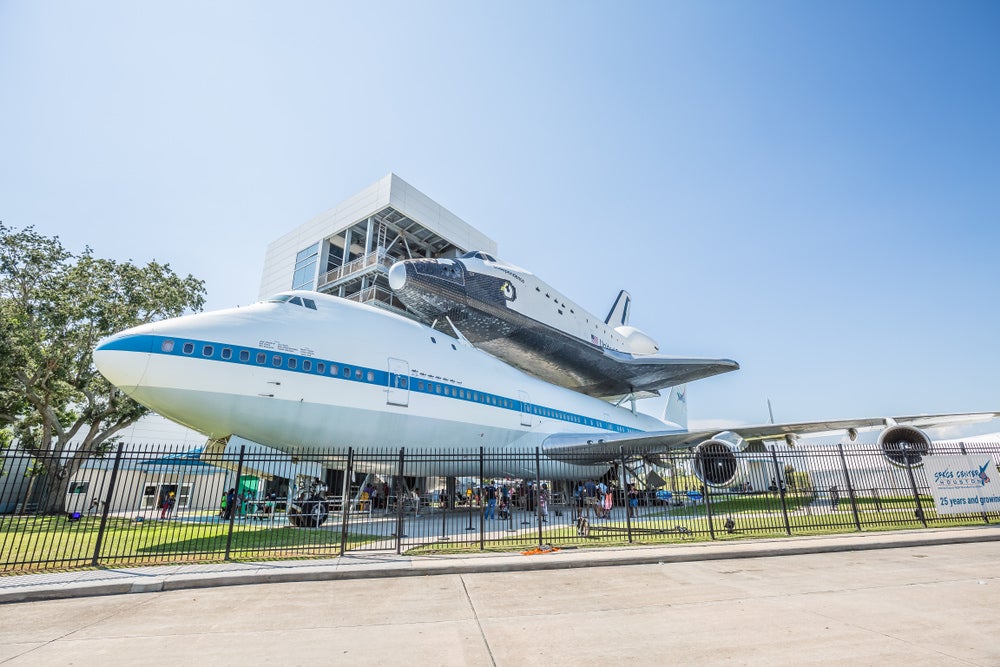 “Houston, we have a problem.” It’s the iconic line from the Apollo 13 mission that many know, even if they aren’t space launch enthusiasts (and even if it’s technically a misquote). The reason that the Manned Spacecraft Center wound up so far away from Cape Canaveral, where manned space flights are actually launched, has a lot to do with the president for whom the center is now named. Even while he was vice president, Lyndon B. Johnson was deeply involved in the space race.

In 1961, when the Kennedy Space Center was built, the Florida site was chosen for proximity to existing air force facilities, as well as positioning on the globe. The Manned Spacecraft Center, on the other hand, needed plenty of room for office and administrative staff, access to ocean ports for shipments to Cape Canaveral and other NASA locations, and access to high-tech infrastructure like telecommunications networks and a high-traffic airport.

Vice President Johnson, a native Texan with plenty of political pull from his early career, had the connections to help NASA get a good deal on prime tracts of land that met all of the necessary criteria. To sweeten the deal, prestigious nearby universities like Rice and Texas A&M promised a steady supply of talented young engineers, scientists, and math experts.

While there are no space launches at the Lyndon B. Johnson Space Center, it’s still an iconic place to visit if you’re interested in space tourism and NASA history. You can visit the Space Center Houston to see exhibits featuring spacecraft that have returned to earth, actual space suits used by astronauts, and go inside a replica space shuttle. Best of all, you can take the NASA tram tour through the Lyndon B. Johnson Space Center and see Apollo Mission Control for yourself.

Outdoor enthusiasts will also appreciate how close this campground is to the hiking and biking trails in Seabrook, Texas, as well as the disc golf course and fishing pier. Spillway Park is also nearby in the Bayshore/San Leon area. There is camping available there at Piney Point Campground, too, if you prefer a tent camping experience to an RV park. 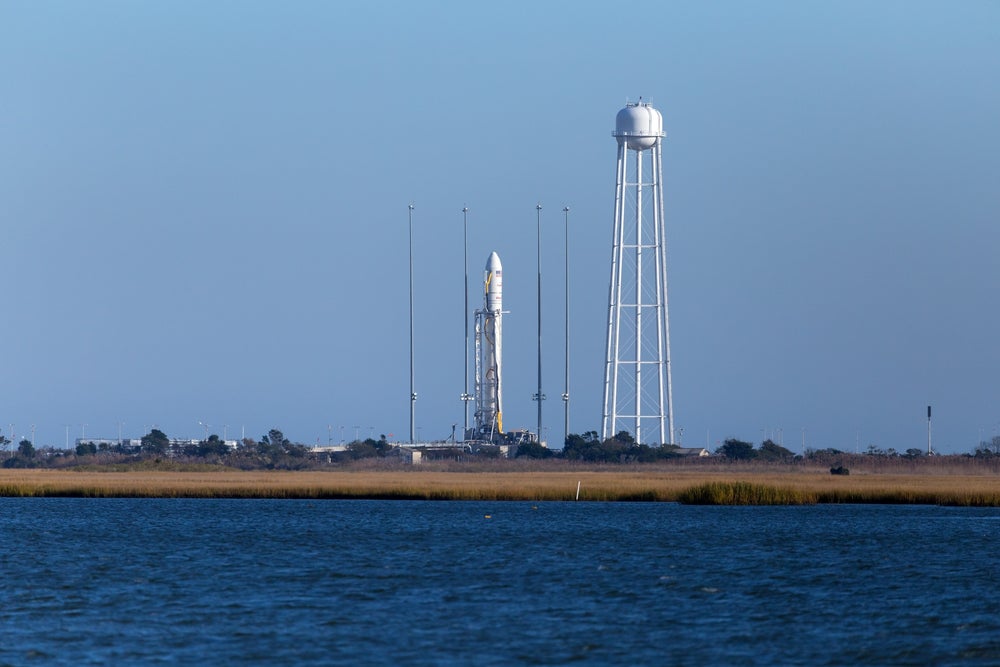 Wallops Flight Facility on the Virginia seashore isn’t as famous as other space shuttle launch locations like Florida’s Space Coast or Houston. That said, there have been 16,000 launches from the rocket testing range at Wallops since it was founded in 1945. Those space launches were used to test systems that later took astronauts into space from Cape Canaveral, like the Little Joe rockets that were a key part of Project Mercury.

You can tour Wallops Flight Facility to learn more about the spacecraft that have been tested here, view real live space launches, and attend free public lectures. They also host events like a 60th birthday party for NASA on September 22, 2019. The Visitors Center also serves as a viewing area for space launches, with an observation deck, a bleachers, and live updates piped in to the visitor center’s PA system.

The other great thing about seeing a space launch at Wallops is how close this flight facility is to some of the best natural wonders in Virginia. Just across a narrow channel is Chincoteague Island, and beyond that Assateague, the famous preserve where wild ponies run along the coast. You can camp close to the space shuttle launch locations at Wallops Flight Facility on Chincoteague at Toms Cove Campground, Chincoteague Island KOA, or at more remote, dispersed sites on Assateague, where you can really see the ponies in their natural habitat. 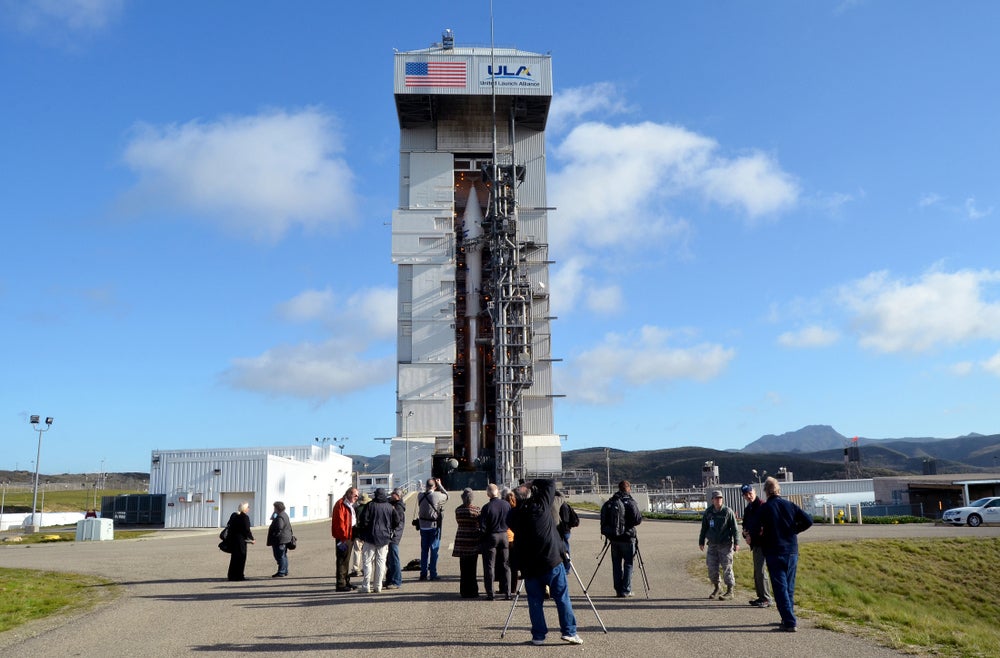 A group stands in front of an Atlas V rocket set to launch in 2013 from Vandenberg Air Force Base. Image from Bill Morson / Shutterstock.com

Because Vandenberg is both one of many space shuttle launch locations and an active military base, touring options are limited to monthly windshield tour on the third Tuesday of each month at 1:00 p.m. Unlike Cape Canaveral and even Wallops, there’s no visitor center with exhibits of past spacecraft and flight suits. But when the weather and flight path cooperate, there are several spots around Lompoc, California where you can see rockets take flight—and even more places to camp nearby.

The intersection of Santa Lucia Canyon Road & Victory Road is a well-known viewing site for space shuttle launches, which can sometimes attract crowds. Show up early to see SpaceX’s Falcon9 rockets take off from the SLC-4E launch complex, which you can see pretty well from this spot. Harris Grade Road is further out and higher up, giving good distance and panoramic views, though not much detail. Even better, however, is the corner of Azalea Lane and Camilla Lane off Cabrillo Highway, where elevation gets you a good vantage point and some relief from the marine layer fog that can hamper launch viewing. Space launch fans call this area the Hawks Nest.

What Vandenberg lacks in public accessibility it makes up for in nearby outdoor recreation. Vandenberg Airforce Base is just south of Santa Maria, California and just north west of Santa Barbara. Savor the American Riviera, Los Padres National Forest, and protected California coastline while you hike, camp, and even snorkeling in the Anacapa Islands.

Jalama Beach County Park is just forty five minutes south of some of the best space launch viewing sites near Vandenberg, and within an easy day’s drive of San Francisco and Los Angeles. A local’s favorite for years, word has started to get out about Jalama Beach, where sunsets and happy dogs are the norm.

There are over a 100 ocean-front campsites for tents or RVs equipped with grills, fire rings, and picnic tables. 31 have electrical hookups, and all have access to full-service bathrooms and dump stations. In addition to the signature Jalama Burger that campers savor year after year, bring some freeze-dried ice cream sandwiches for a post-launch treat!

“One of my all time favorite campgrounds. Despite the often overcast skies and evening winds, the weather is almost always enjoyable. The drive out to Jalama is amazing, not to mention the gorgeous beach it eventually leads you to. They are dog friendly and the burger shack offers the famous “Jalama Burger” that will definitely knock your socks off.” —The Dyrt camper Codee C.

This article was brought to you by Mountain House.

Their freeze dried meals are as perfect for space as they are for camping and backpacking next to space shuttle launch locations! 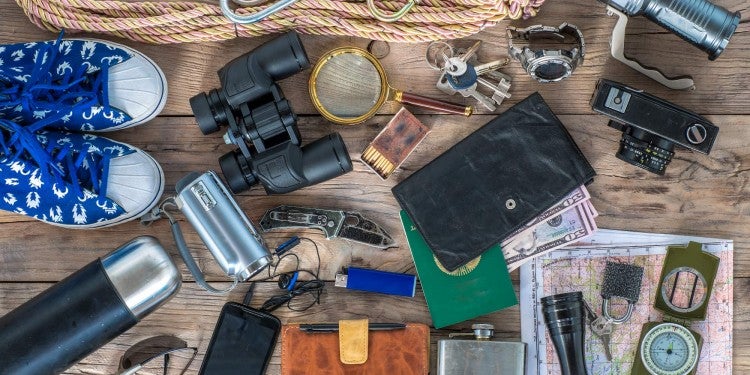 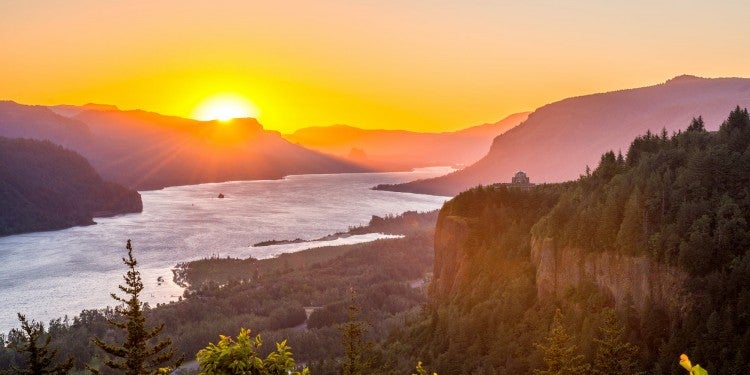 The Best Campgrounds on The Columbia River Gorge, According to Campers 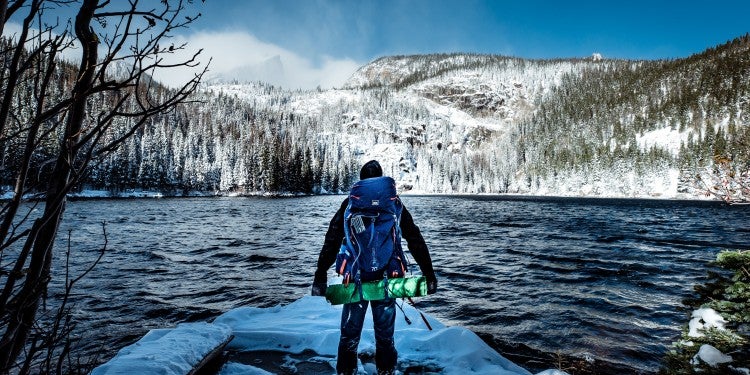 How to Enjoy A Winter Weekend in Rocky Mountain National Park 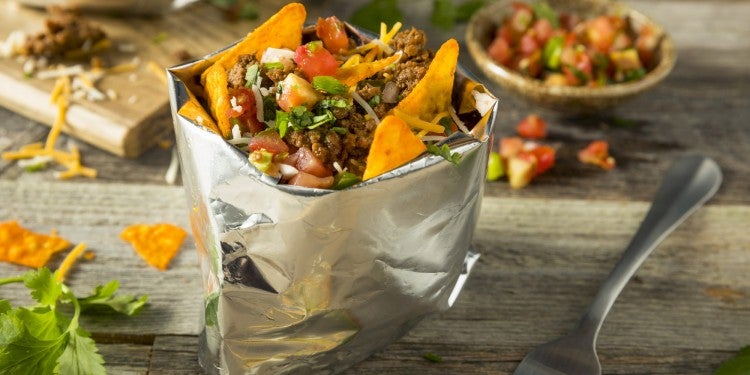 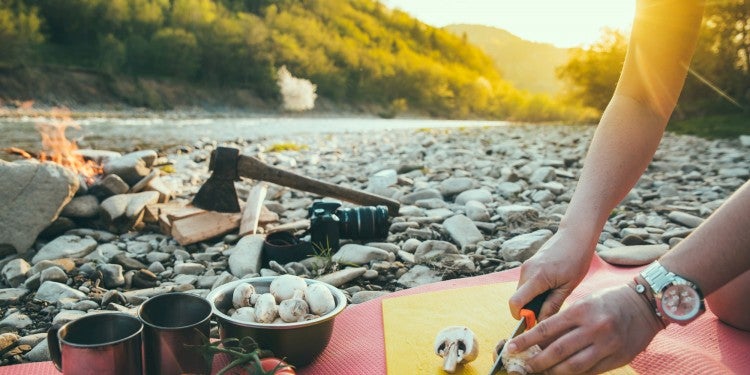 10 Mushroom Recipes to Enjoy at the Campground

See Space Launches At These Campgrounds Near SpaceX and NASA Bases