Where to Camp in America’s Oldest City: St. Augustine, Florida 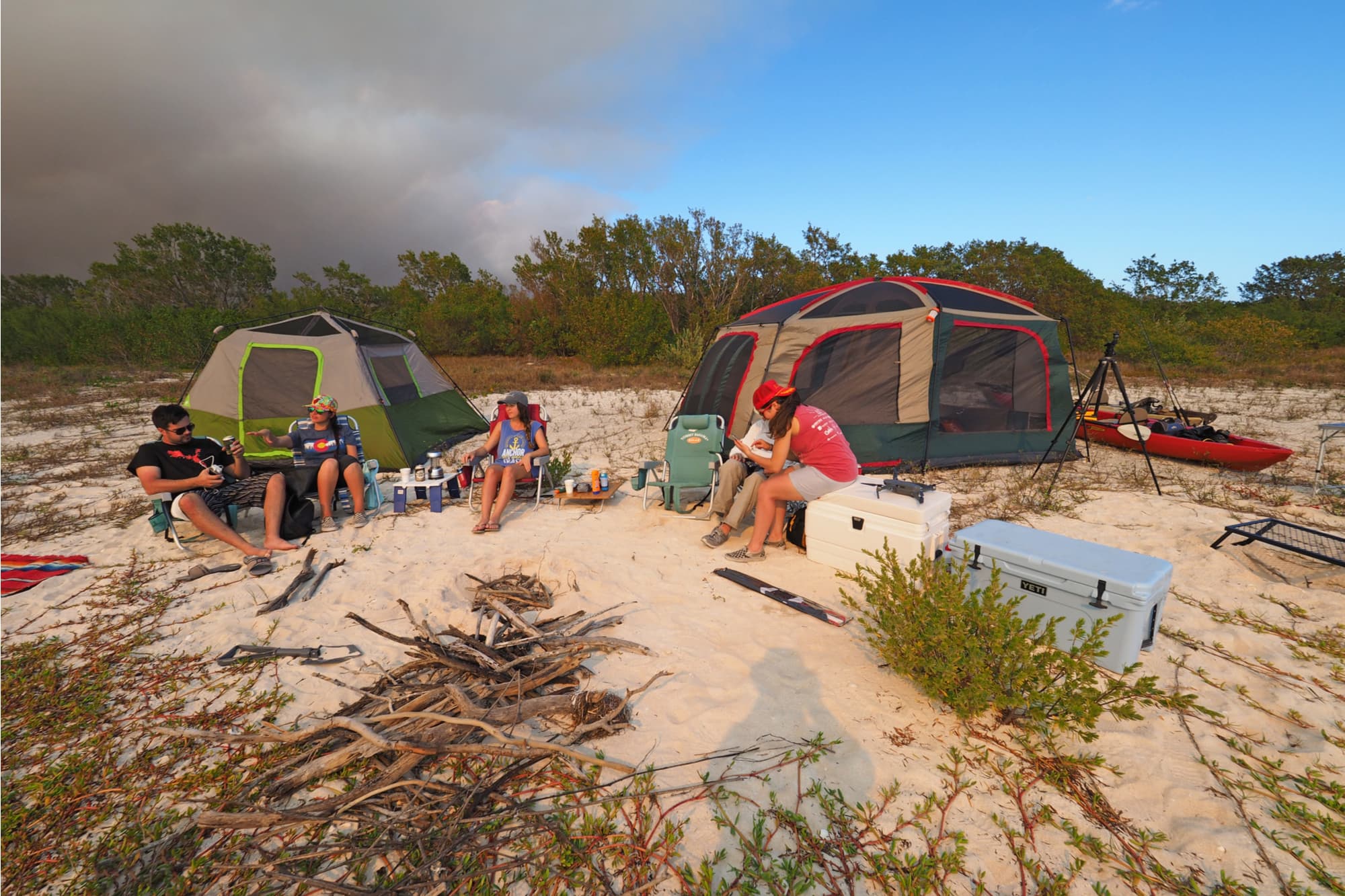 Two Florida cities, St. Augustine and Pensacola, have recently entered into a contentious debate for the title of America’s oldest city. St. Augustine has long been recognized as the oldest successful European colonization, as it was founded by Spanish explorer Pedro Menéndez de Avilés in 1565.

But in 2015, the tip of an ancient olive jar changed the historical narrative about the oldest city in America. The University of West Florida discovered the artifact in Pensacola and dated it back to 1559, making the Spanish colony at Pensacola the oldest city in America by six years. Whichever Florida city is truly the oldest isn’t yet known. But the brick streets and centuries-old buildings of St. Augustine, along with its many historical remnants, make it easy to be transported to the country’s origins.

Camping in St. Augustine allows you to sleep under the same stars that guided the Spanish explorers to Florida, and wake up upon the same shoreline they once viewed in the horizon.

Explore One of America’s First Cities by Camping in St. Augustine 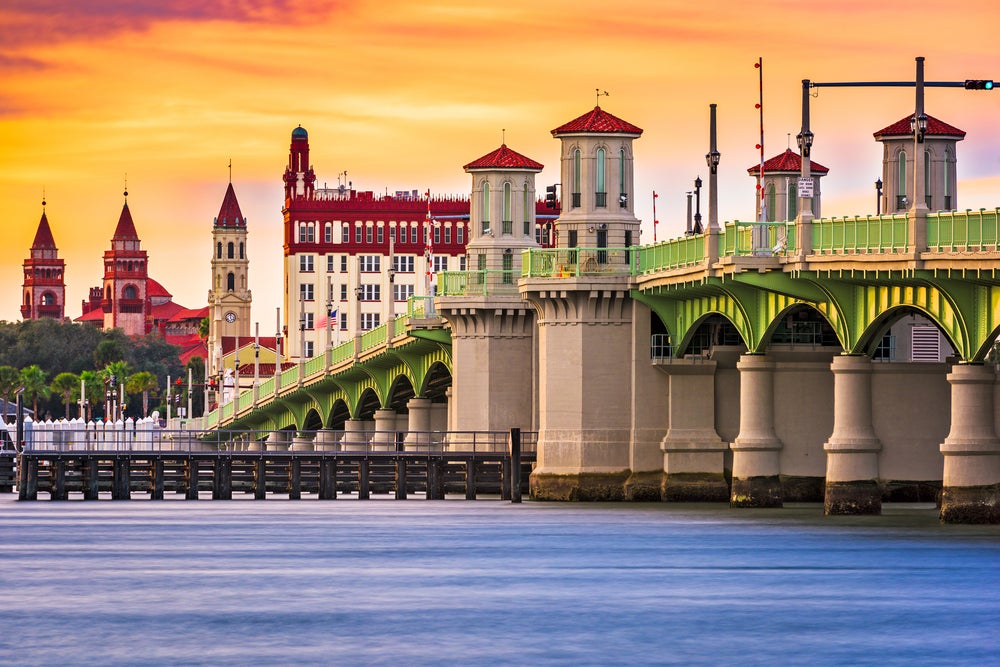 The best—and most popular—St. Augustine camping option is Anastasia State Park. Located on 1,600 acres of unspoiled Florida coastline, Anastasia State Park offers 139 campsites. Of those plots, 87 can accommodate RVs or tents, and the remaining 46 are tent only. Restrooms with flushable toilets and showers are located on the campground. Only eight people are permitted per site, and the park only allows for two vehicles to be parked at any given campsite. With more and more people visiting the sunshine state to camp every year, Anastasia State Park has become a popular camping destination in Florida, so make your reservation months in advance to ensure your spot.

“Anastasia Island State Park is located in the middle of all that makes St. Augustine amazing! It’s a 10 minute drive into the heart of the historic city. The campground is located in the park that has the most beautiful beaches, with dune mountains that peak over the salt marsh as you dry through the park.”  —The Dyrt camper Kat G.

What to do at Anastasia State Park 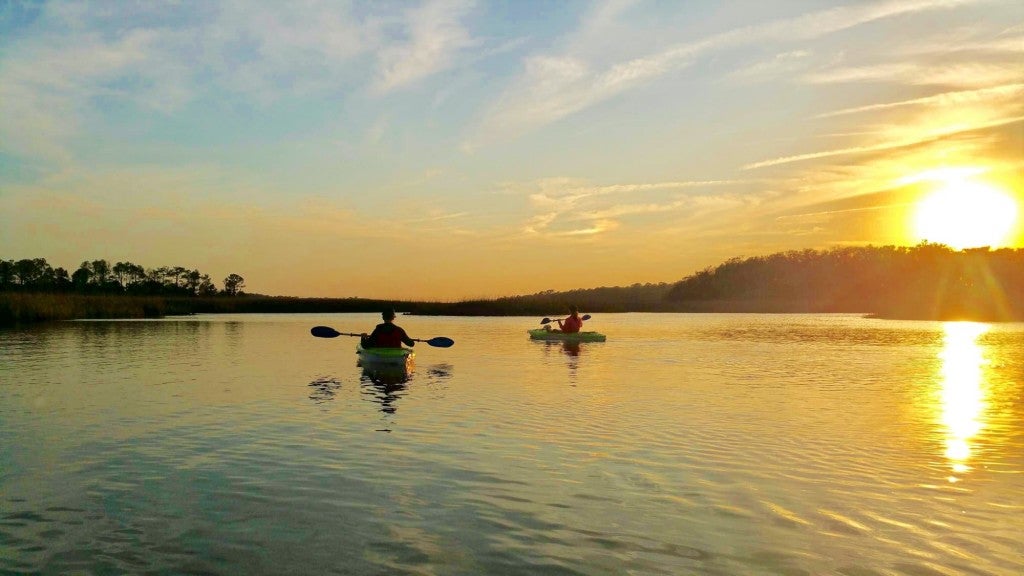 Camping in St. Augustine offers kayakers and canoers the experience of paddling through the Salt Run. The Salt Run is an estuarine tidal that separates Anastasia Island and Conch Island. The east of the river is comprised of flats and oyster beds, while the west side has structures like docks and a jetty. If you’re a paddling enthusiast that forgot your water vessel, or if you don’t own one, rentals are available inside the park.

As a guest in the habitats formed along Salt Run, campers should pay attention to all the signs that operate to keep these environments unharmed. 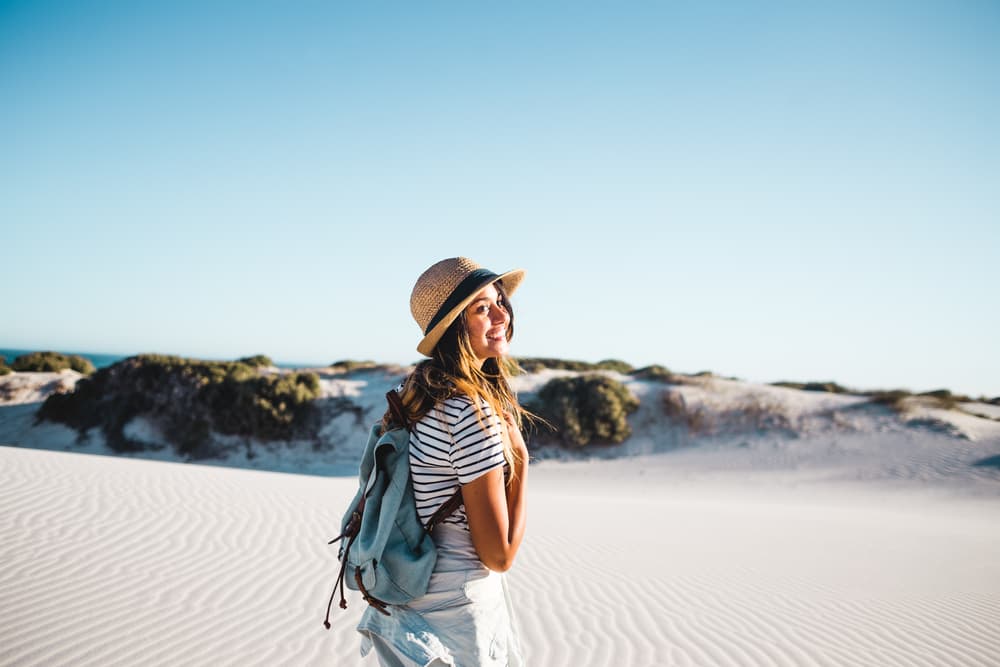 Waking up from your beachside campsite and hiking along the untouched primitive landscapes of ancient times is more than just possible in when camping in St. Augustine, it’s normal. The Ancient Dunes Nature Trail is about a thirty minute walk on mostly level ground, but be prepared for the ups and downs of some dune walking. The trail, surrounded by tangled jungle and shrouded by a maritime canopy, is the result of ages of life, death, and decay that enriched the soil and made it possible for the greenery to flourish, where previously only sea oats could grow.

Anastasia State Park’s converging ecosystems draw in a variety of diverse bird species, making the park one of the official stops on The Great Florida Birding and Wildlife Trail. Look for the shorebirds that land along the beaches, such as laughing gulls and black skimmers. The Salt Run is a welcome respite for waterbirds like the great blue heron and the wood stork— but also plays home to some nesting bald eagles for those willing to search for them.

Granted that you have a Florida fishing license and obey the rules that prohibit fishing in certain fragile ecosystems like the marsh and dune areas, fishing is permitted while on your St. Augustine camping trip. Fishing in the Salt Run mostly yields trout, but there are also reds and flounder in the estuarine tidal. 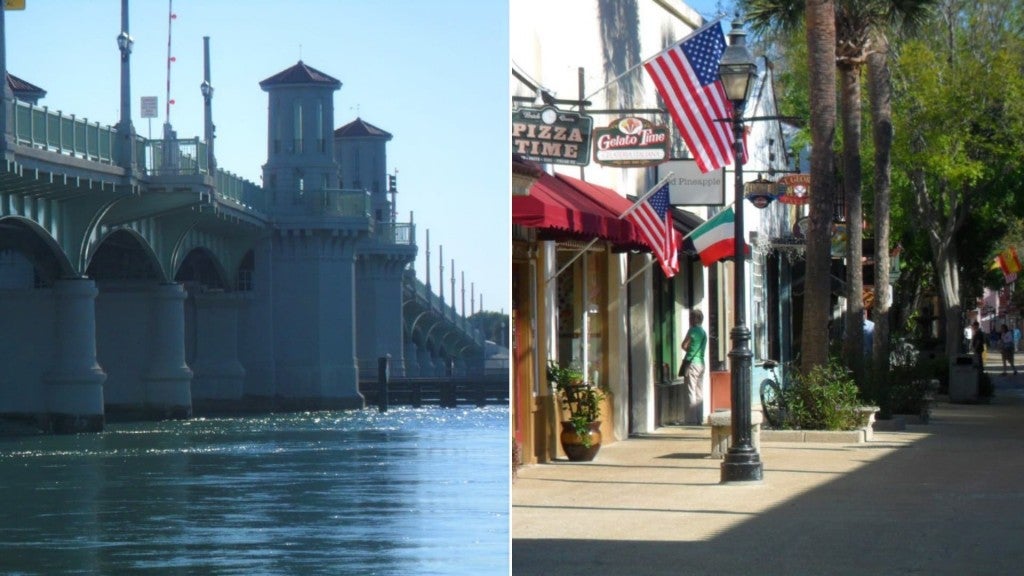 Of course the proclaimed oldest city in America would hold some haunting tales. And sometimes the tragedies of the past come back in paranormal forms and activities. There are plenty of ghost tours to choose from in St. Augustine, but one to note is the Secret of St. Augustine Ghost Tour.

During the 75 minute walking tour, Dion Moore takes supernatural enthusiasts through downtown historic St. Augustine and through over 400 years of tragedy, unexplained stories, and legend. Moore knows how to put on the theatrics in his ghost storytelling too, his resume includes magician, pro-wrestler, and stunt man.

If you’re looking for a more relaxing way to witness historic apparitions, try the Ghosts and Graveyards tour, which takes specter-searchers around the city by trolley.

Step away from St. Augustine camping and walk straight into the colonial Florida experience at the Colonial Quarter. The Colonial Quarter started as a humble museum that depicted life in this part of Florida during the 18th century. However, after a multimillion upgrade the new Colonial Quarter offers blacksmithing and musketeer demonstrations, tavern eateries, historical tours, and even a music arena.

The varied educational activities, historical lessons, and included eateries make the Colonial Quarter an ideal visit for kids and families. 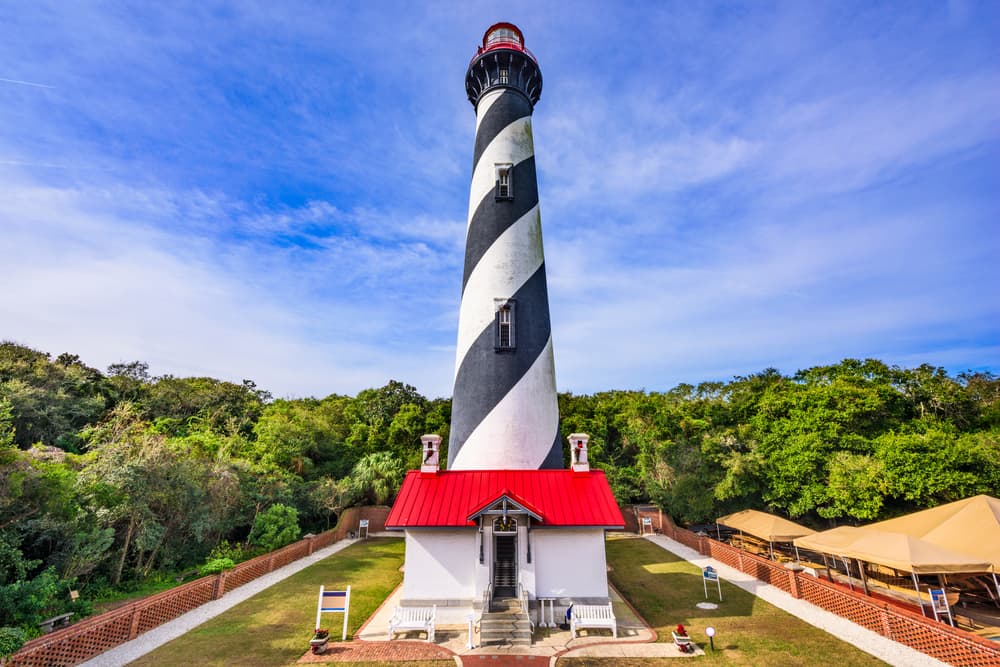 At one point the St. Augustine Lighthouse had been boarded off, sealed away from the public, and inoperable. The lighthouse keeper’s residence was burned to the ground. But these structures from the late 1800’s were revitalized and returned back to the community.

Today 225,000 people visit the lighthouse annually. It’s more than just a tower, however; the on-site museum also showcases historical artifacts. And the museum’s programs get more than 53,000 youth involved annually in hands-on activities with the area’s wildlife and history.

During your visit, climb the 219 steps to the top of the lighthouse and witness the best aerial view of St. Augustine.

The colonial era in Florida marked years of strife, battle, and conflict. One remnant of that historic war is the Castillo de San Marcos National Monument, that remains in St. Augustine today.

The fortified structure was once used as the residence for the mayor of St. Augustine, so he was safe during attack. The fort would eventually fall under the possession of Great Britain in 1763, and then the U.S. Army in 1825, when it continued to be used as military barracks.

Today the National Park Service keeps the fort open to the public, and teaches about the military strategy, the materials used to create the fort, and the impact it had on securing Spanish colonial presence in Florida.

At one point the grand museum building was the Alcazar Hotel, which operated the largest swimming pool in the world—by 1890’s standards. The magnificent structure still attracts large crowds today, and is frequently used as a wedding venue, though there’s no pool available anymore.

6. The Fountain of Youth

You may remember from history class that Spanish conquistador Juan Ponce de Leon was not on a settler’s mission. He was not looking to occupy, he was instead determined to discover the mythical “fountain of youth.” Though the explorer never found the waters of eternal youth, now his landing point in Florida has been made into the Fountain of Youth Archeological Park.

The park offers historical exhibitions, archeological excavations, and information on the original people of the land — the Timucuan Indians. The fountain of youth isn’t really located here, but the park is still a site of historical importance as one of the original settlements by the Spanish.

The park opened as an attraction as early as 1901, and may have been gathering crowds since 1860, according to Michelle Reyna, Fountain of Youth Archeological Park spokesperson, in an interview with National Geographic. While you won’t be young forever here, it is a great and pet-friendly way to spend the day with your family. 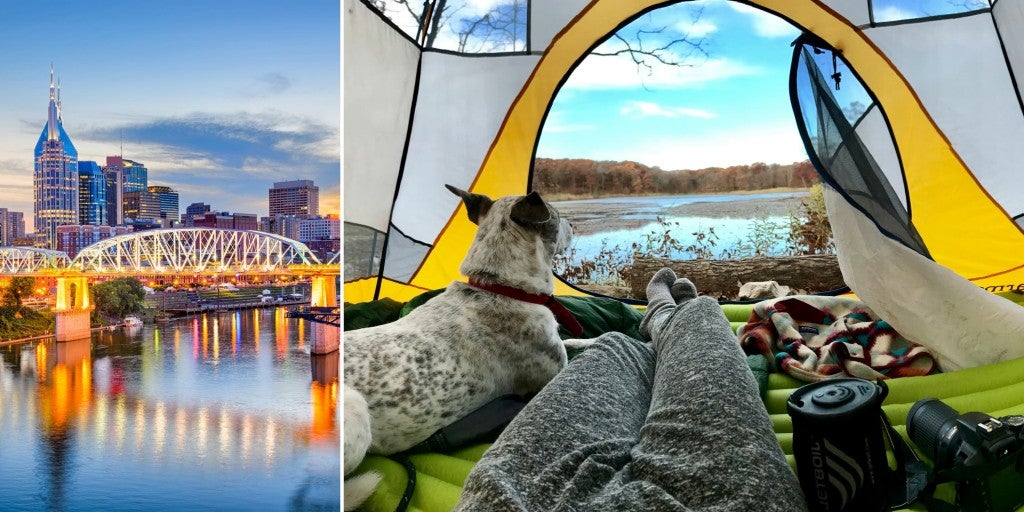 This article about Nashville camping is brought to you by our friends at Roanline, whose broad selection of gear from Fayettechill is guaranteed to bring…

May the winds welcome you with softness. May the sun bless you with its warm hands. May you fly so high and so well, that…