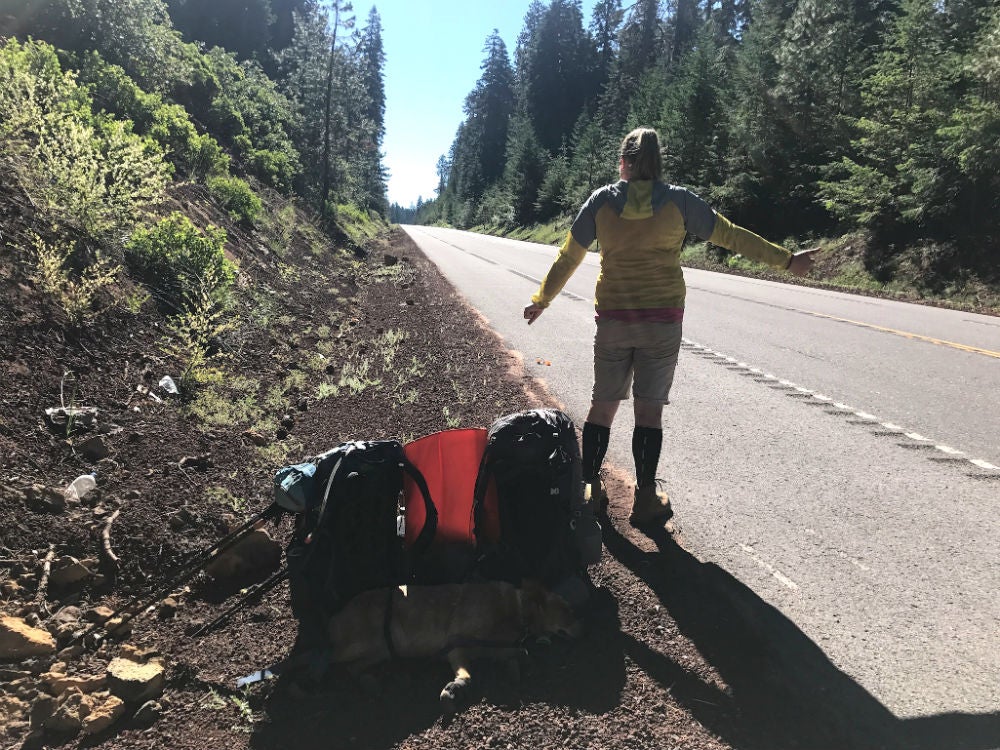 Have you ever wanted to escape the demands of modern life and spend weeks (or months) in the woods? Two long-distance hikers are sharing their journey on the Appalachian Trail and the Pacific Crest Trail, and showing how you can do it, too.

Join us for first-hand accounts as they tackle the country’s most iconic long-distance trails; the PCT and the AT. Jenny R. and Shelly B. are both hiking enthusiasts with busy lives that make it difficult to take a whole summer off. So they’re covering sections of the trail instead of going end to end, proving that you don’t have to take off for months to experience the thrill of thru hiking! Jenny and Shelly are each testing out a backpacking backpack to see how it holds up for long-distance hikers.

Jenny, Jeremy, and Delilah have been on the Pacific Crest Trail for six days now. (If you didn’t read Jenny R.’s first diary post, catch up here.) They’ve spotted a bear, endured painful blisters, and felt the emotional toll of the trail already. Let’s jump into Jenny’s diary entries to find out how they’re doing, and what’s in store as they make their way across Oregon on the Pacific Crest Trail.

Day 7: A difficult decision in the backcountry near lava fields 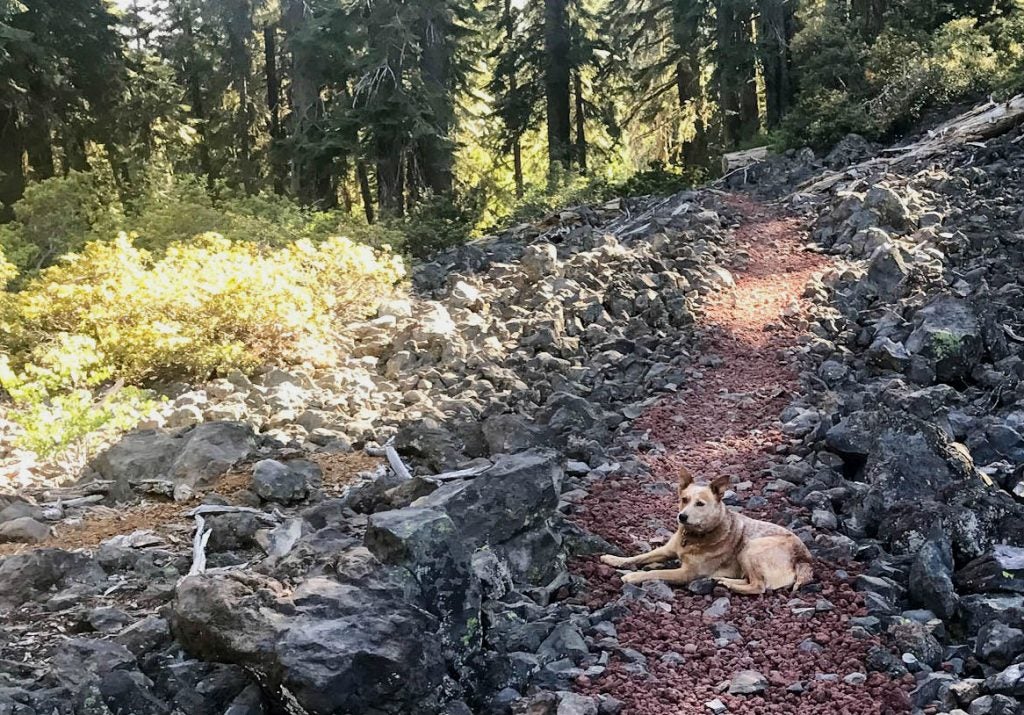 This morning was rough. We got out of camp by 6:45 but it was tough to get going and motivated. We considered sending Delilah home. She is limping and not seeming to be doing well. Maybe we have pushed her too hard.

We decided who would take her home and both of us wanted to keep hiking but we decided it would be me to get off the trail. This led to lots of emotions and frustrations (life and not just hiking related) coming out during the morning climb. Lots of tears from me.

But we decided to watch her and give Delilah a little more time to recover. But the day got better and I saw another bear and lots of people. Delilah bounced back and we discovered a small blister on one of her paws. We put the booties on her through the lava fields and she ran like a bull in a china shop. Plus she looked so cute.

Today was good. We tried to get out on the Pacific Crest Trail early to finish the lava fields before it got too hot which was nice. Left knee is hurting—started a day or so ago—especially on the downhills. Not sure what I did or what is causing it. Felt better this afternoon, though.

Had to make a detour to Fish Lake for microspikes we ordered from REI in Ashland. Gotta prepare for the snow! Thanks REI for the overnight delivery and great customer service!

Added 4 bonus miles today though, which cut into our trail miles. We tried to hitch hike but no one would pick us up. Then we did a big climb after Fish Lake — Jeremy was hurting but I charged up the hill slow and steady! Delilah is doing better especially with her booties on. 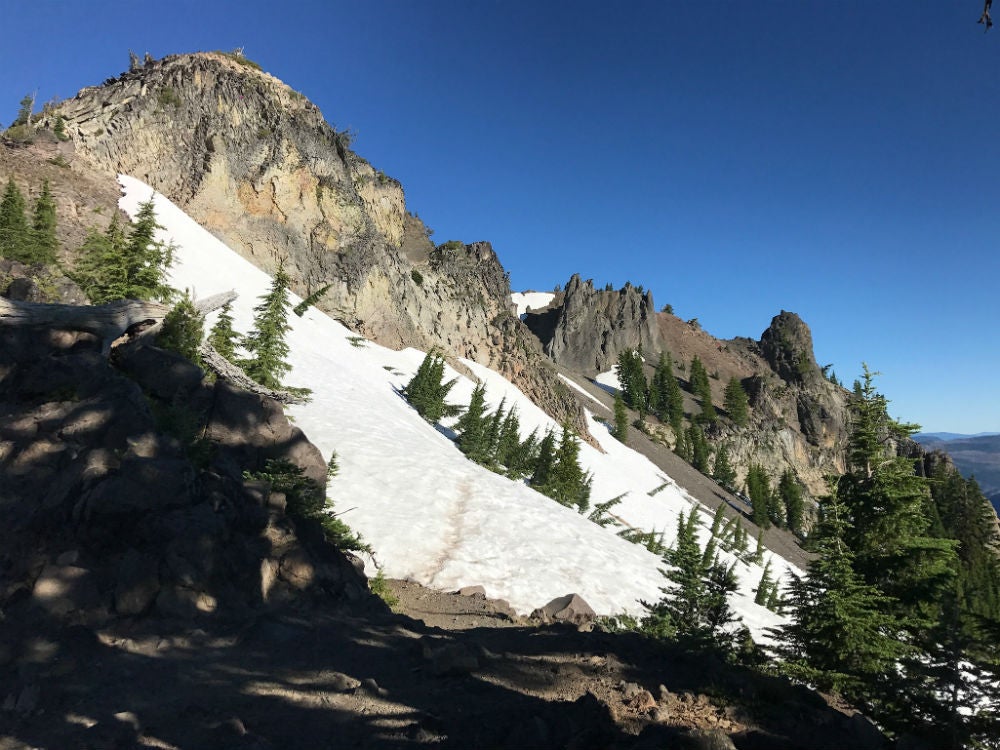 Today was the most memorable yet. It started with bugs waiting to attack us as soon as we got out of the tent early this morning. Then there was lots of rocky uphills with a climax in the morning of butt sliding down the North side of Devil’s Peak. There was so much snow we couldn’t walk down!

The microspikes were great and we are glad we did the trip to Fish Lake to get them. An ice axe would have been nice but obviously not required. Great mountain water also. Ran into 3 Asians who rescued Jeremy’s hat from the slide.

Hiked through 2 burn zones along the Pacific Crest Trail today. First was really eerie—expected to see vultures on the blackened trees. The second was beautiful—regrowth starting to happen. Made a mistake of not shutting my bite valve and I leaked out 1-1.5 liters of water. This was really needed today.

Day 11: Lost and low on water near Mazama Campground 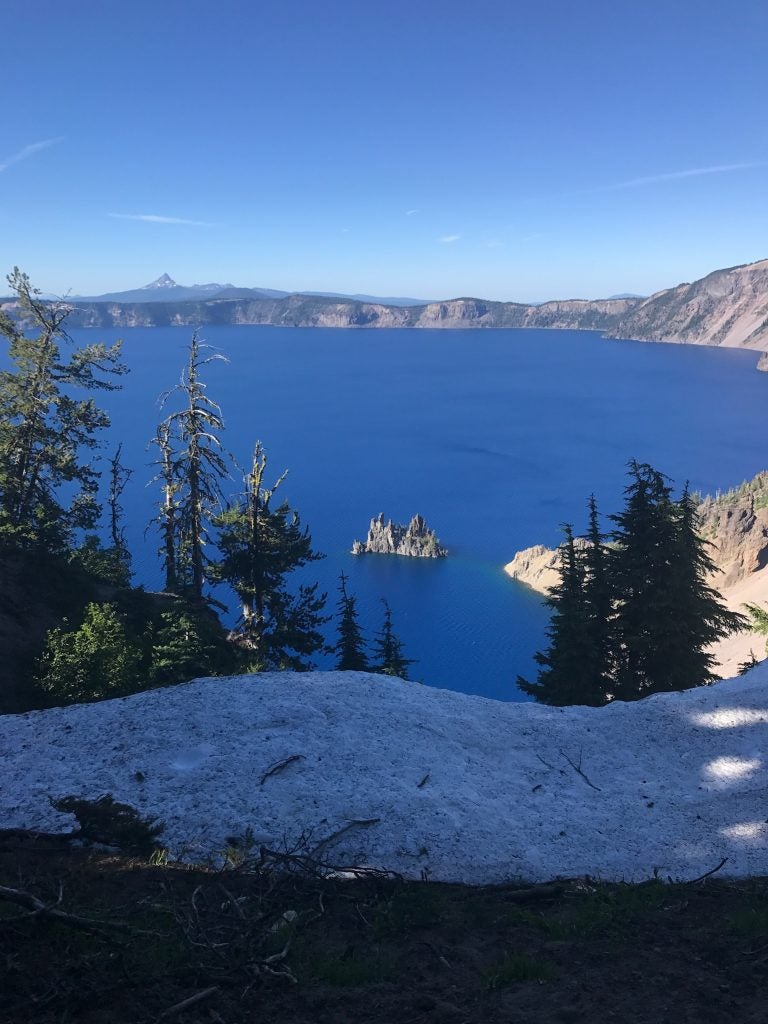 It was a rough day for Jeremy. We only had 1.5 liters of water to get both of us from camp to Crater Lake. We made it, but it was a lot of uphill with snow covering the trail which made things challenging. We lost the trail quite a few times with the snow and poor tree markings, which was not a good combo with the low water. We were lost for about 30 minutes, which made Jeremy have a complete meltdown. He lost his sunglasses and took out his frustrations on a tree with his trekking poles—both poles broke.

We finally found the trail but had to melt snow for water which helped the mood. Finally made it to Mazama Campground by 1:30 but it felt so much later. Met lots of other Pacific Crest Trail hikers — Jeremy was in his element which put him back into a good mood. Kimmy, Trevor and Lincoln arrived and it was a great relaxing night with friends and wine.

Day 14: A change of plans at Diamond Lake Resort 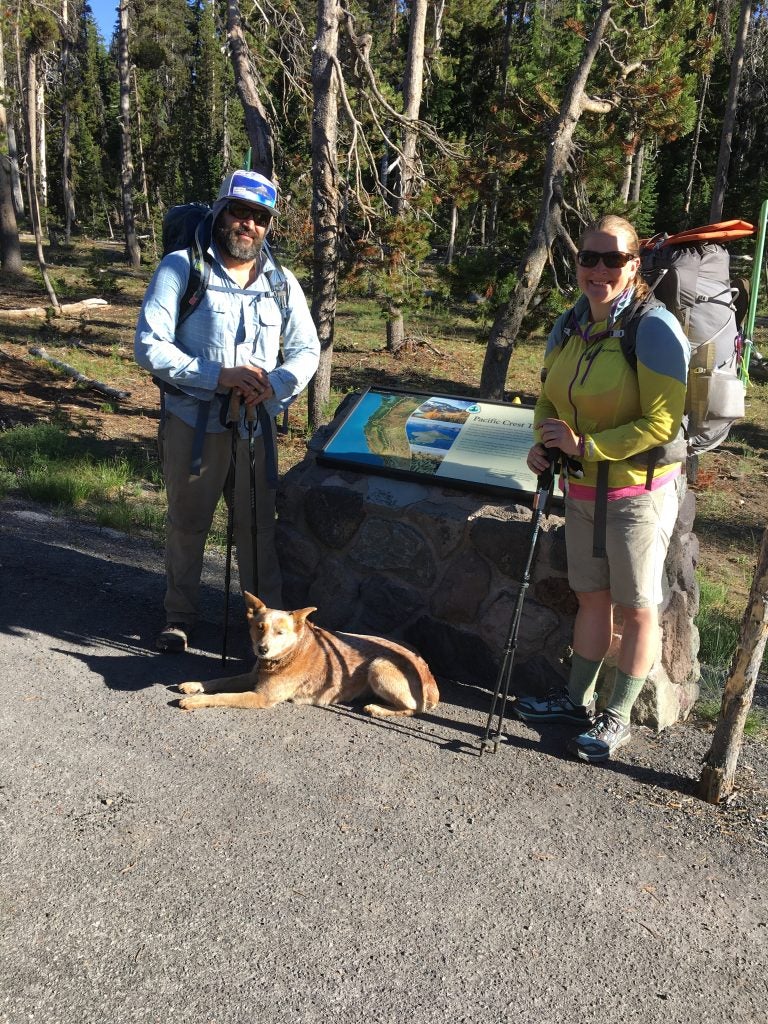 Got up this morning and hauled ass to highway 138 to catch a 10am shuttle to Diamond Lake Resort. Made it to the pick up spot (or where we thought it was the pick up spot) in time—did over 3 miles/hr to do it. But ended up waiting for the shuttle for over 3 hours. Lots of waiting around at Diamond Lake but we had a good lunch there.

The lake was very pretty. Waiting around was irritating. We decided to skip Mount Theilsen due to a lack of current information (Diamond Lake Wifi was so slow!) I am bummed about this but I also understand we don’t want to die just to make the Pacific Crest Trail.

We got a ride from Diamond Lake to Windigo Pass which was awesome so we can do the Oregon Skyline Trail and miss the other bad trail section. Now due to this change in plan we only have 20 miles to get to shelter cove which puts us way ahead of schedule.

We are planning to come back to do Theilsen at a later time. Camped just off the Skyline trail at some lakes but the bugs were horrible. It was very social evening, but I HATE MOSQUITOS!

A big thank you to Gregory Packs for partnering with The Dyrt in presenting their stories.

Stay tuned for Part III as Jenny, Jeremy, and Delilah continue their journey across Oregon on the Pacific Crest Trail! We’ll also be joining Shelly B. as she hikes on the Appalachian Trail. 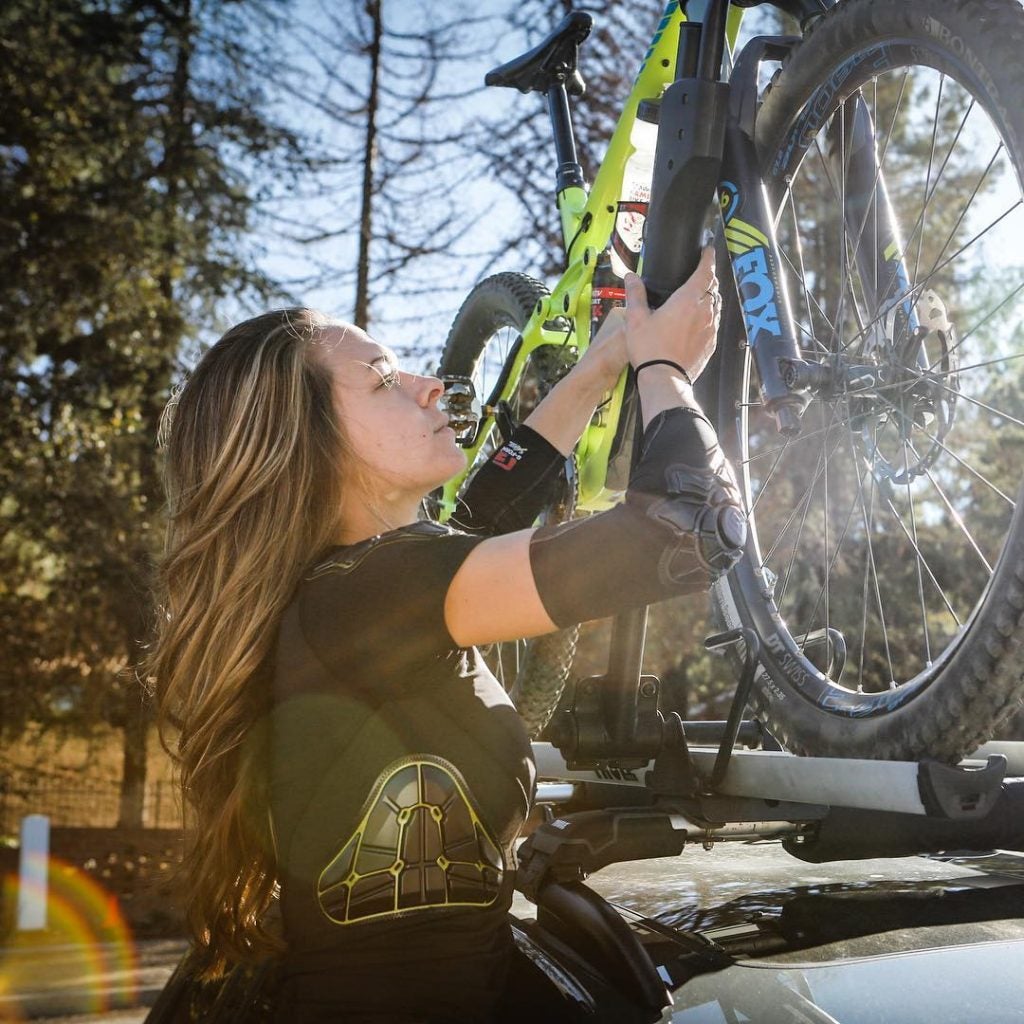 Cycling is expensive, but it’s important not to skimp on safety. These three companies offer bike gear that’s affordable and will keep you safe while… 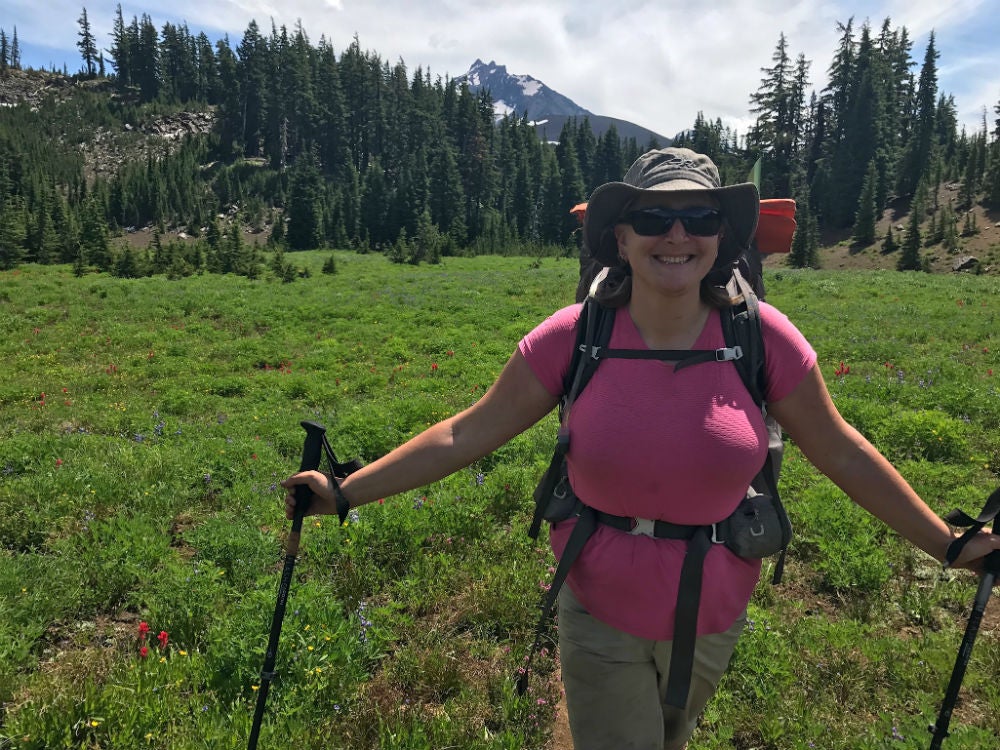 Have you ever wanted to escape the demands of modern life and spend weeks (or months) in the woods? Two long-distance hikers are sharing their…