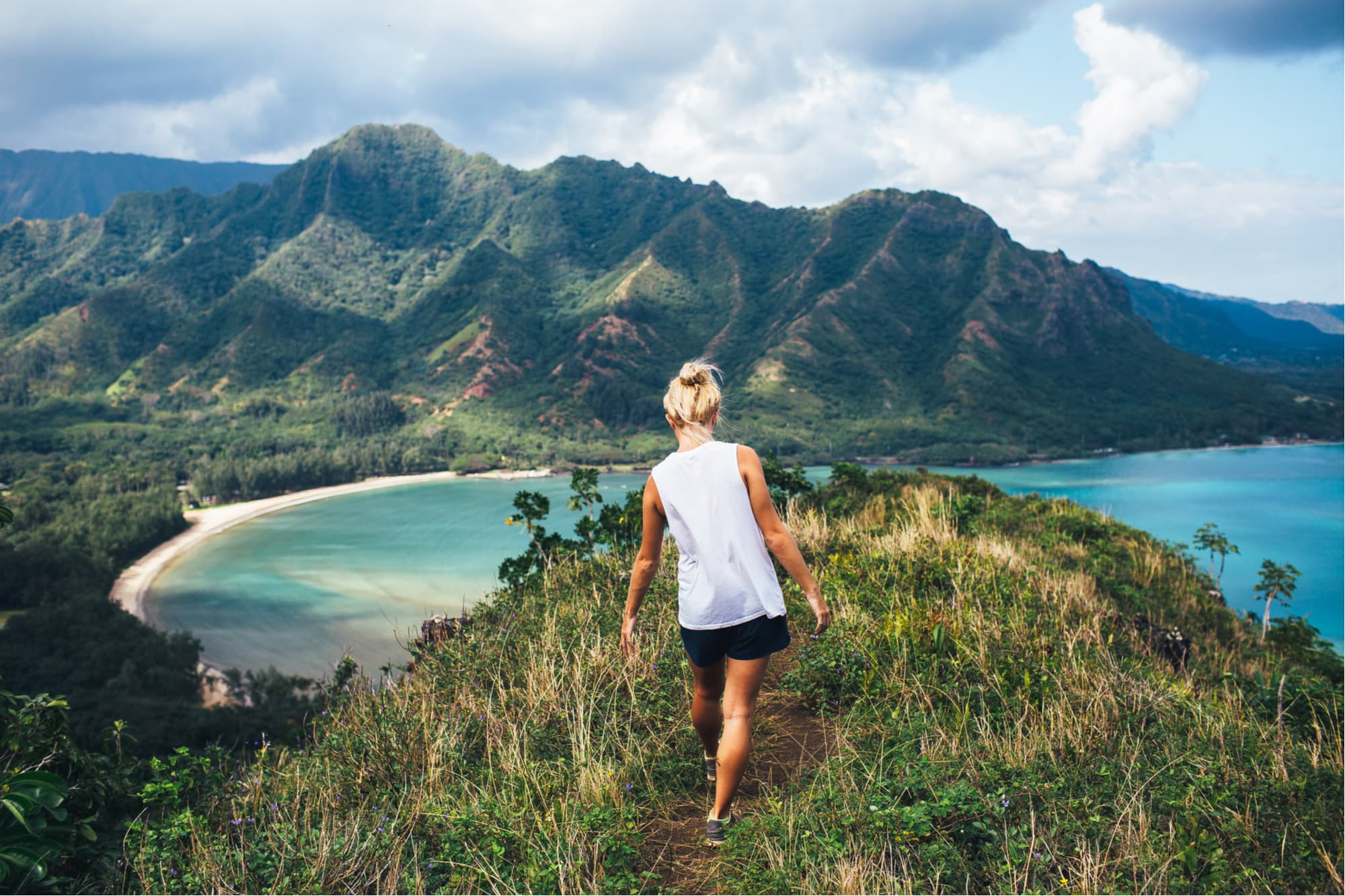 Going on a hike in Oahu rewards the senses; you can take in 180-degree views of the cobalt blue ocean, feel the trade winds as you weave through lush tropical forests and hear the songs of the fire-red apapane, or Hawaiian honeycreeper. And with virtually pleasant weather year-round, hiking on Oahu is great way to experience the island, for first timers to locals alike.

These five great hikes are worth the trek, from visiting the island’s most recognizable landmark, feeling the spray from a 150-foot waterfall, to standing on top of a World War II observation bunkers, with the vast Pacific Ocean all around you. All this, never too far from the capital of Honolulu. 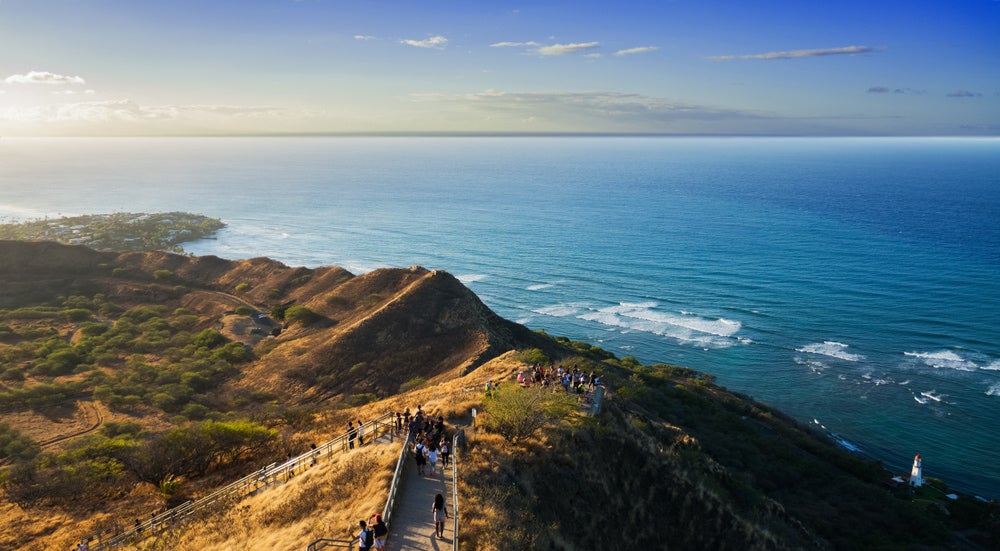 Plenty of Oahu hikes will take you around volcanic activity, but the Diamond Head Summit Trail takes you to one of the most recognizable landmarks on Oahu. It’s a volcanic tuff that formed about 300,000 years ago, and got its name from 19th-century British sailors who believed the shining calcite crystals they found on the crater were diamonds. Native Hawaiians previously named the extinct volcano Leahi—which means brow of the tuna in Hawaiian—because they thought the crater’s slope looked like an ahi, or tuna head.

Today, it’s a state monument and one of the most iconic Oahu hikes. The .8-mile trail features switchbacks and 99 steps, but it is still considered an easy to moderate hike. The trail ends with panoramic views of the island, from the nearby Koko Head crater, Waikiki, downtown Honolulu to Oahu’s west side. Note: There’s an entry fee of $5 per vehicle or $1 per walk-in visitor. 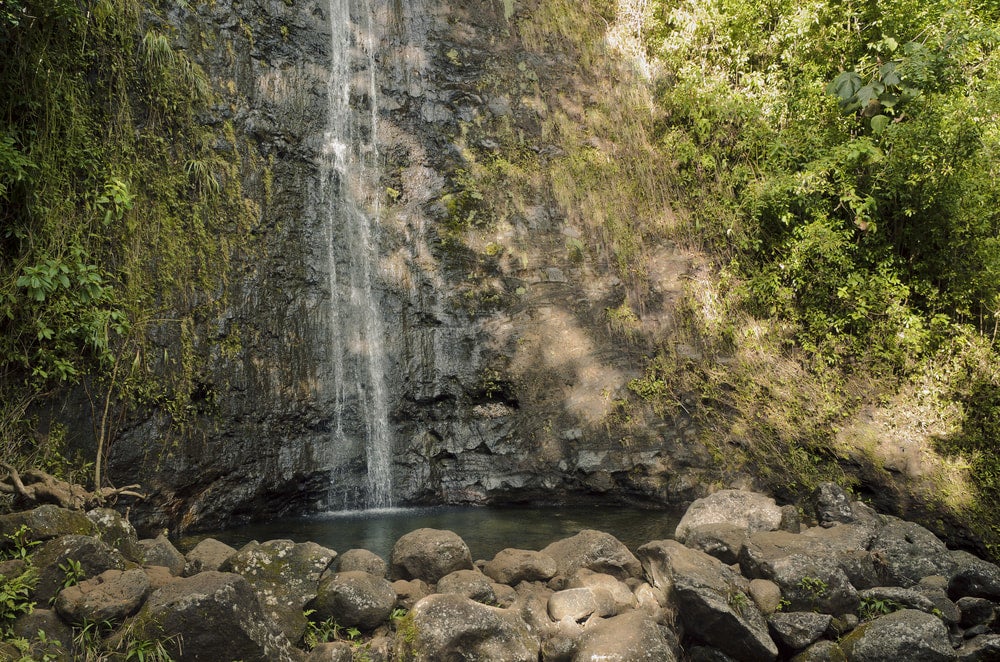 There may be taller waterfalls on the other Hawaii islands, but Manoa Falls is still worth the visit, involving one of the best hikes on Oahu. Tucked in the back of lush Manoa Valley, about five miles from downtown Honolulu, this trail is well maintained, albeit often muddy, thanks to the area’s frequent rain. It’s a well-trafficked hike that’s well-liked by visitors, local families and nearby college students. At the end of this short, .8-mile-hike there’s a 150-foot waterfall and a surrounding pool. Be sure to bring mosquito repellent for this hike, the water sources attract them by the dozen. 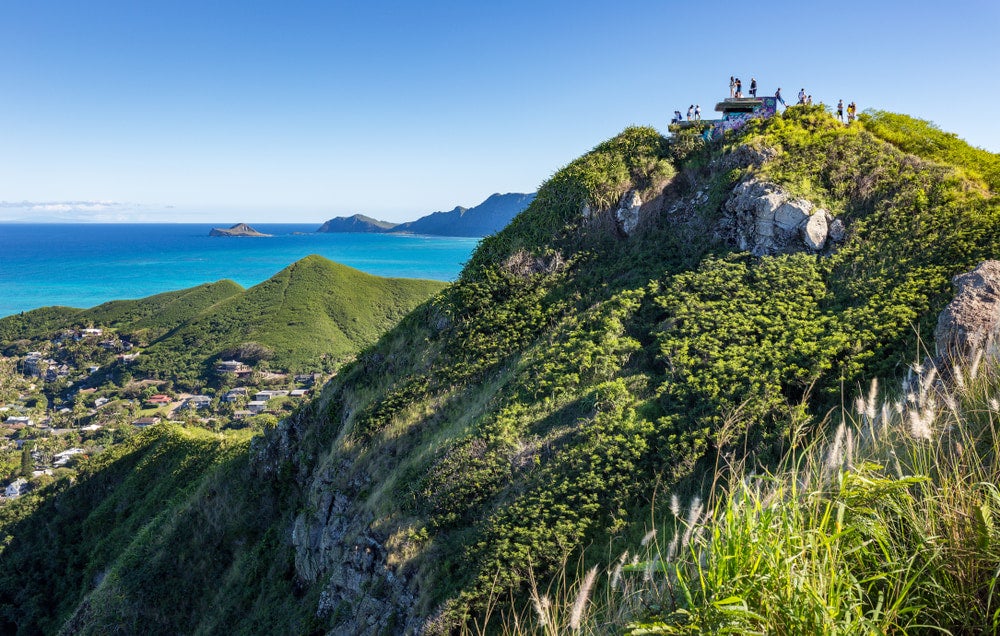 This roughly one-mile out and back hike is known by its colloquial name, the Lanikai Pillbox Trail, and takes hikers by two observation stations (shaped like pillboxes) built during World War II atop Kaiwa Ridge. The trailhead is located in the serene Lanikai neighborhood on Oahu’s Windward side and is one of the more popular hikes in Oahu due to its scenic peak and short distance.

The trail has seen so much use, in fact, it was closed for roughly two months last summer so $250,000 in repairs could made to the bunkers after years of exploration by hikers. The rocky, dusty trail has a sloping incline and is unshaded. What it lacks in tree cover, it makes up for in sweeping views of Lanikai, Kailua, the Koolau Mountains and two offshore islets, Mokulua Iki and Mokulua Nui. Meaning “two islands,” the pair are known as the Mokuluas. 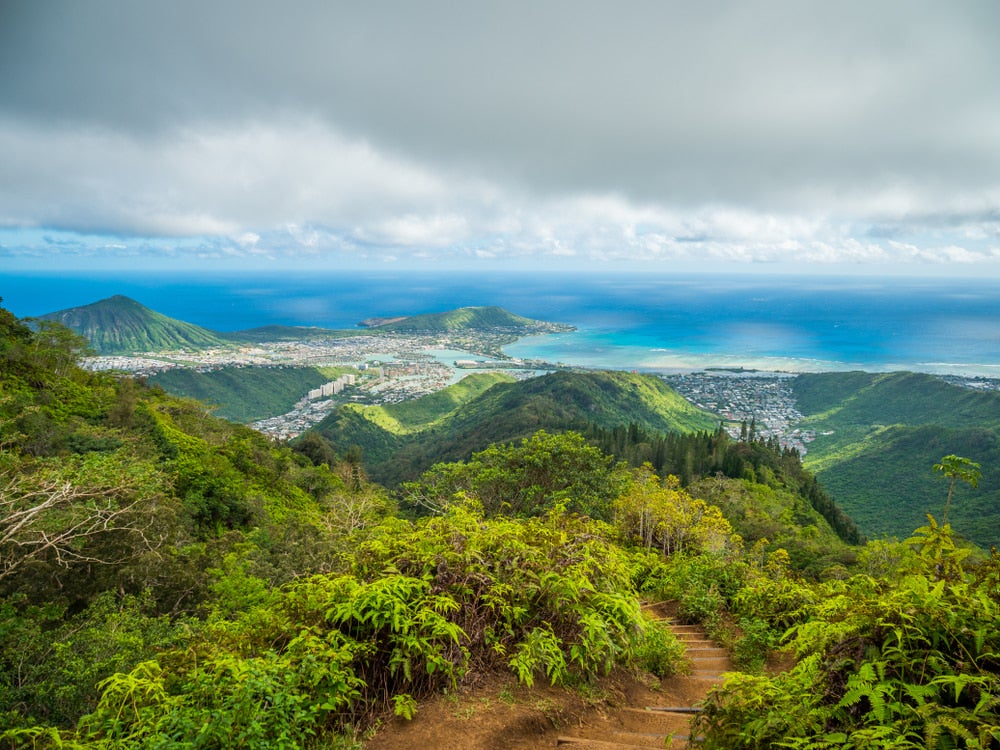 If you want to break a sweat before encountering that stunning view at the end of your hike, head to Aina Haina, a neighborhood in east Oahu. That’s where the trailhead for the quad-burning Kuliouou Ridge Trail is located. The 2.5-mile, one-way trail ends at the summit of the jagged, emerald Koolau Mountain range. With a 2,000-foot elevation gain, this hike is recommended for intermediate to advanced hikers. The trail winds through ironwood, formosa koa, Norfolk pine, guava, and Christmas berry trees.

Roughly two-thirds into the hike, take a break at one of the two covered picnic tables, because from there it gets steep. The trail continues to incline and there are also sets of stairs. This trail offers great views of Waimanalo and windward Oahu along the way, and at the top, a near 360-degree view of the island. Note: you can camp along this trail, but there aren’t designated camp sites, bathrooms or water. 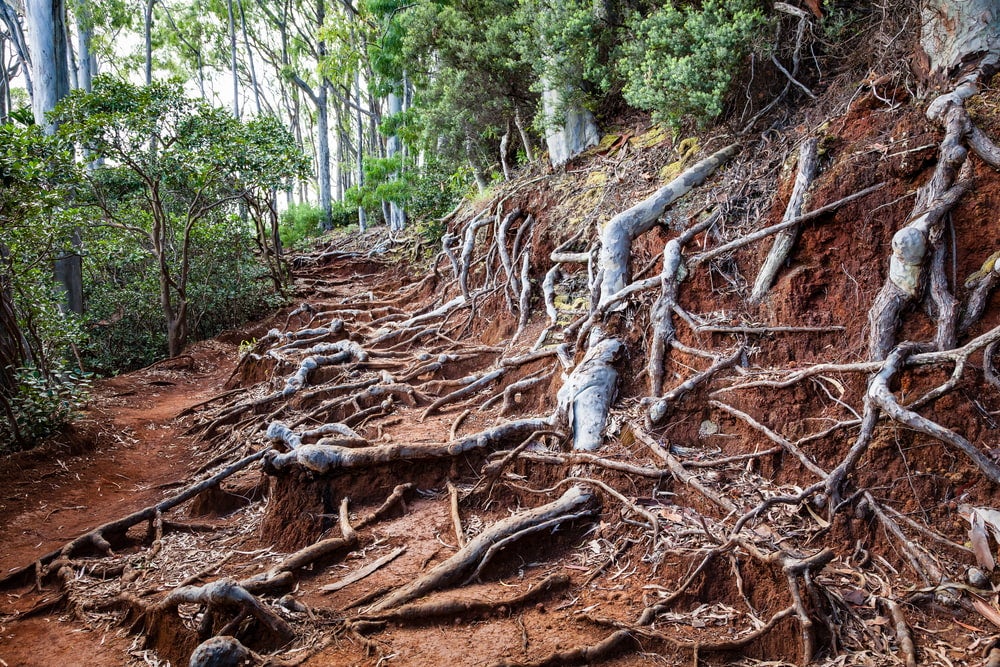 Just 20 minutes from the hustle and bustle of Honolulu is Keaiwa Heiau State Recreation Area, an oasis in central Oahu. Inside the 384-acre park and campground is the popular, Aiea Loop Trail. This 4.8-mile loop hike hugs the western slopes of Halawa Valley. There’s a 900-foot elevation gain along the way, rooted areas and a small stream crossing, but much of the trail is shaded with lemon eucalyptus trees—giving the air a nice fragrance—Norfolk pines and higher up, endemic ohia and koa trees.

The trees open up to views of south Oahu, from Pearl Harbor to Diamond Head and Honolulu. From here you can also see the island’s H-3 highway, considered one of the nation’s most beautiful freeways, and its most expensive one.

Tiffany Hill is a writer and editor based Honolulu who specializes in travel, culture and business. When she’s not on assignment, you can find her playing roller derby. 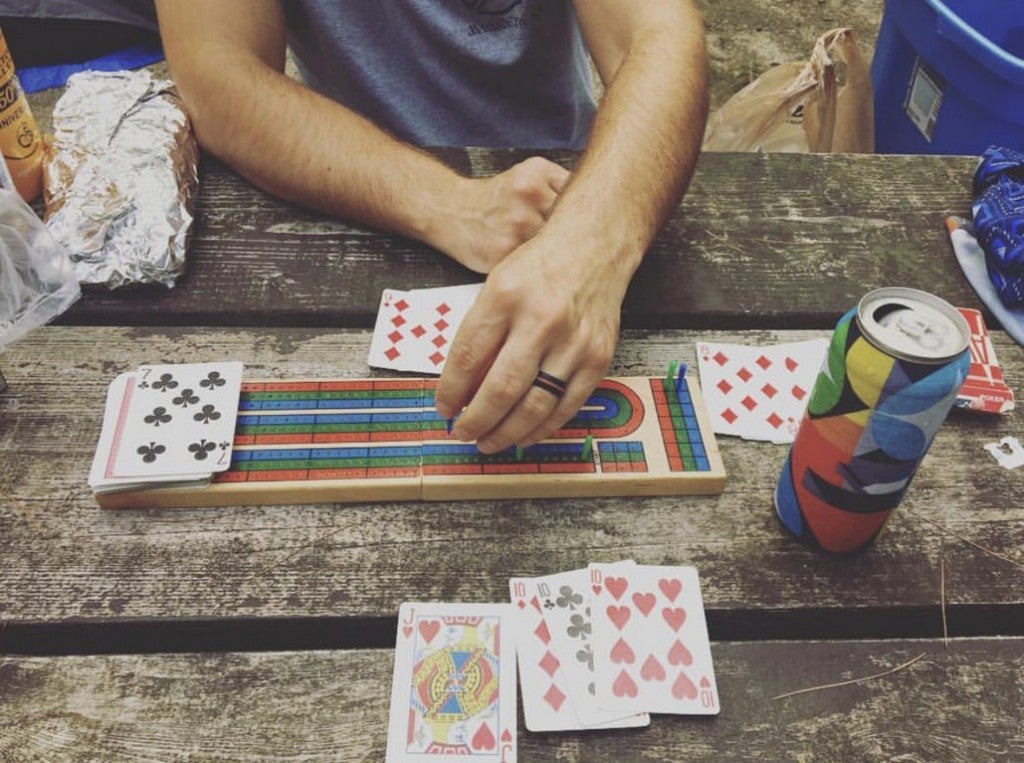 16 Family Board Games You Can Bring to the Campground

Board games play a crucial role in the brain development and growth of children, helping to strengthen logic and reasoning skills, critical thinking, and spatial…

Accessibility is key to making public lands truly public — and one of the biggest hurdles for parks across the country toward that involves mobility….