You Can Float Over the Everglades by Camping in a “Chickee” 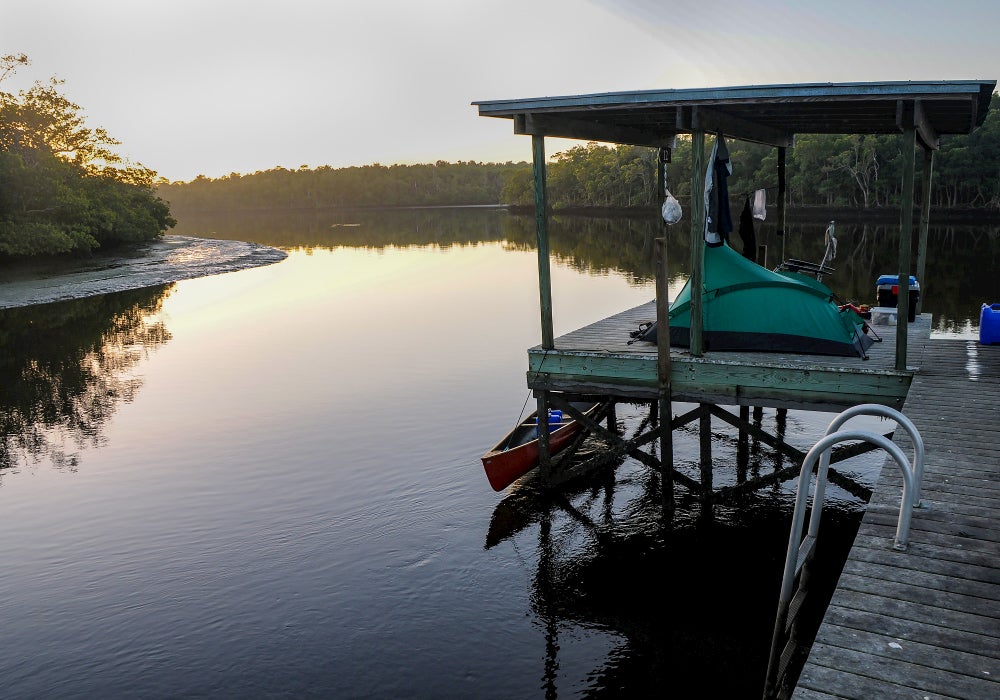 Floating on the sea, covered by the sky, with only the occasional mangrove bank in sight, Everglades chickees take campers into the secluded pockets of the Florida wilderness.

While chickees — simple stilt structures often with thatched roofs and open sides — may be popular today for outdoors enthusiasts looking for a return to raw nature, they have a long history in the southern Florida Everglades.

When the Spanish arrived in the 16th century, they observed that the indigenous people of southern Florida used chickees for many facets of life. One hut might be designated for cooking, one for sleeping and one for eating.

Today, the chickee remains just as simple. They’re especially useful in the Everglades, where wild mangroves and tempestuous water levels in the wetlands make land camping difficult. And they’re a truly unique way to go camping in Florida. 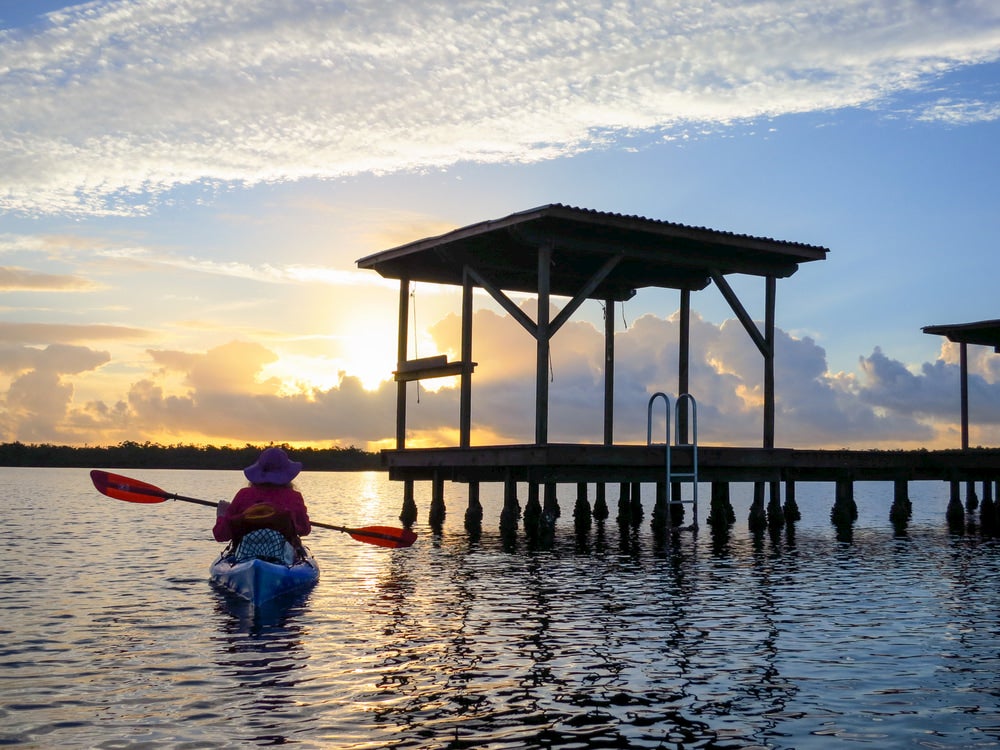 The Everglades chickees will take some effort to find. Only after winding through the twisting waterways of the River of Grass in a canoe or kayak can paddlers discover these floating camping structures. Due to the isolation and difficulty traveling to and from the chickees, fully prepared packing is especially imperative. This includes food, water, clothing, toiletries and navigation supplies for this mini voyage. The mosquitoes dominate this area in certain seasons, so it would be wise to include bug spray on your packing list.

Each chickee can sleep up to six campers, but the double-platform chickees, connected by a bridge over the Everglades water, can support camping groups of up to 12 people.

With the particularly devastating destruction brought by Hurricane Michael in the recent hurricane season, some of the chickees have been shut down for repairs, or the canoe paths might be blocked from mangroves torn from the earth. Make sure to check the Everglades National Park Alerts & Conditions for the most up-to-date information on Everglades chickees closures. As of this writing, all backcountry sites in the Everglades National Park are open.

Camping at the Everglades Chickees

No matter which floating platform you find yourself paddling to, there are several rules to keep in mind. Most chickees do not permit any sort of fire, so consider the season and your gear ; the winds can really pick up and make for a shivering night if you’re not prepared.

Hooks and nails are not permitted anywhere on the chickees, so the preferred camping shelter is a standalone tent, not hammocks.

Expect to have company on your chickee camping trip. Egrets, shallots and other wetland birds love to perch on chickees. Sharks and dolphins are known to swim by, and mosquitoes will definitely make themselves welcome. 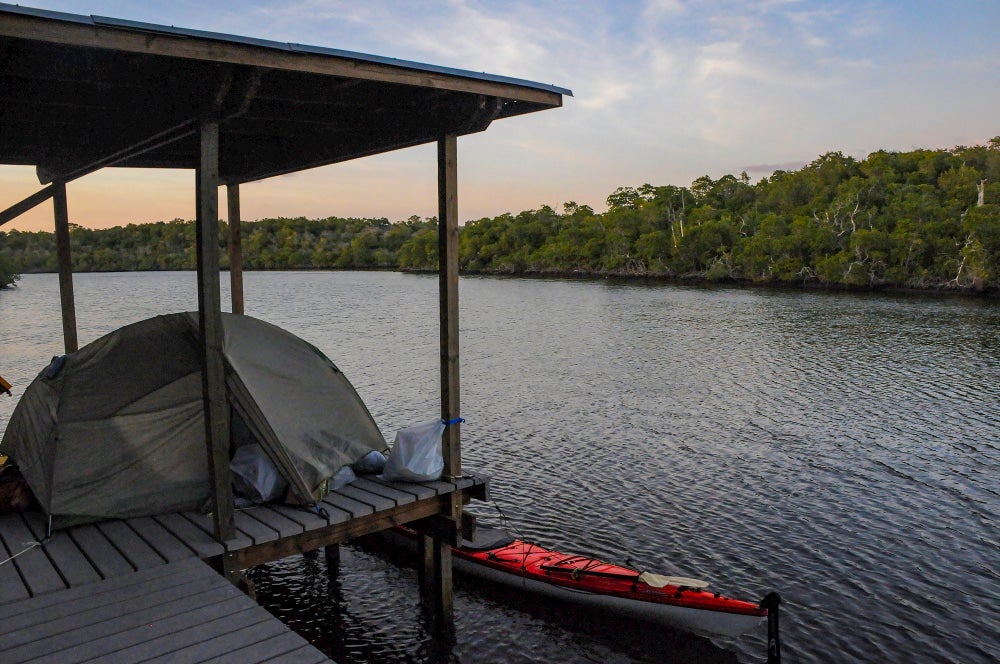 The small platform of the Shark Point Chickee seems especially tiny in the expansive waters of the Florida Bay., but there are some landmarks that border it, including Shark Point Key to the north, Umbrella Key to the south and Otter Key to the east.

From Flamingo, the southernmost point of the Everglades and the Everglades National Park Headquarters, the paddling trail stretches eight miles in a straight line to the chickee. Even though it’s a direct path, the park recommends paddlers bring proper aquatic maps and a compass in case of fog.

This chickee is a double-platform structure, connected by a bridge that holds a portable toilet. Both platforms are roofed. However, the open platforms can be susceptible to heavy winds, and it may be advisable to tie down belongings.

The platform slats are wide enough to allow sunlight to reach the water and grass habitats beneath the chickee. While this minimizes the chickee’s footprint, it also puts your keys in danger of being lost at the bottom of the Florida Bay. A tarp on the platform will keep your small items safe.

Earn your pioneer badge and be the first to share your experience at the Shark Point Chickee on The Dyrt! 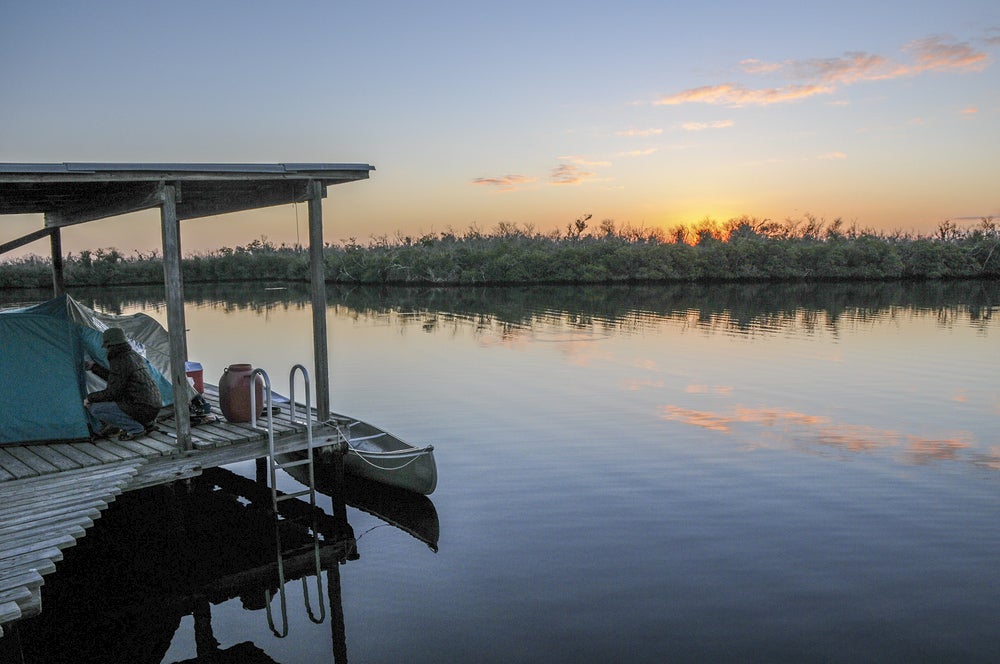 As you approach marker 99 of the Everglades Wilderness Waterway, you’ll reach Sweetwater Bay Chickee, which floats above a winding offshoot of the Last Huston and Sweetwater bays.

Sweetwater Bay Chickee is a two-platform structure, which can support up to six people on each side. This chickee is also equipped with a portable toilet. Keep in mind that fires are prohibited on the floating structures.

“Chickees, Seminole for ‘thatched roof,’ are one of the coolest features of the national park. There are several of these available along the Wilderness Waterway located on the inside (non-Gulf side of the islands).”  –  The Dyrt camper Sarah C. 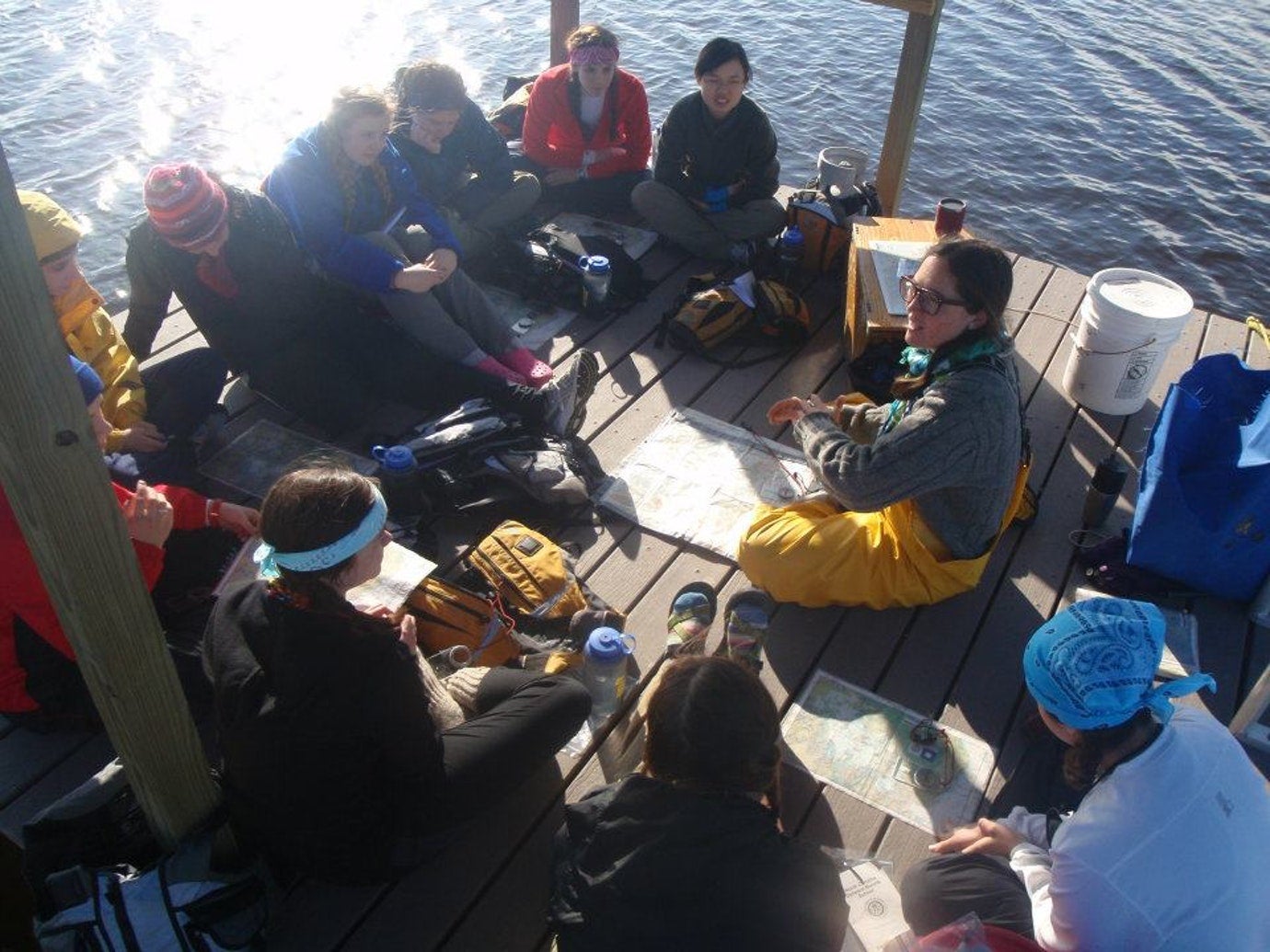 Storms and tide difficulties destroyed the Everglades chickee that once floated nearby, the Sunday Bay Chickee. As its replacement, Crooked River Chickee is one of the newest chickee structures in the park.

This Everglades chickee is constructed in the double-platform style, with overhead cover and a portable toilet. The Crooked River Chickee also has a special amenity — planks built into the side intended for cooking and eating.

Venturing to the Crooked Creek can take several different turns. Since the chickee is located on a looped waterway, paddlers can easily explore into Sunday Bay or wind through the Lopez River. Make sure to consult your Everglades Wilderness map and use a compass.

Earn your pioneer badge and be the first to share your experience at the Crooked River Chickee on The Dyrt!

At the southern end of the Everglades and off the wide Whitewater Bay, Joe River connects to two chickees. The South Joe River and Joe River chickees both accommodate two platforms for a total of 12 people.

Flamingo is around 19 miles from the Joe River chickees. If that’s your launch site, make sure to allot plenty of time and consideration of heavy winds to make it back. 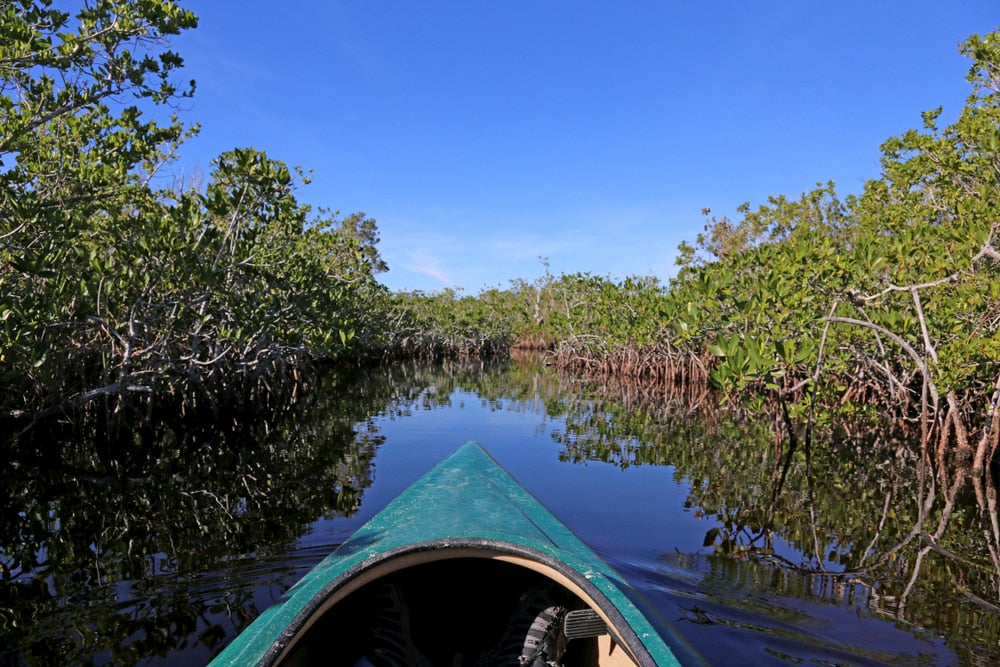 To get to the Hell’s Bay Chickee, you’ll need to brave the Hell’s Bay Canoe Trail. Parts of the trail can be so choked with mangroves reaching from the margin of the shoreline that the trail is known as “hell to get into and hell to get out of,” according to the old timers of the Everglades.

After paddling through miles of bay and channels, you’ll find the Hell’s Bay Chickee at the end of Hell’s Bay Trail. The trail will first take boaters past Lard Can and Pearl’s Bay Chickee. This Everglades chickee is another double-platform structure with roofing and a port-a-john.

You might breathe a sigh of relief after making it through the Hell’s Bay Trail, but there’s a whole new set of problems to navigate on your way to the Lane Bay Chickee.

Because it’s so tricky, trail markers frequently dot the Hell’s Bay Trail to keep boaters on the right path. Those helpful markers come to an end once you reach the end of the trail. You’ll have to rely on your map to make it the rest of the way to Lane Bay Chickee.

The Lane Bay Everglades Chickee is a single platform with a portable toilet. 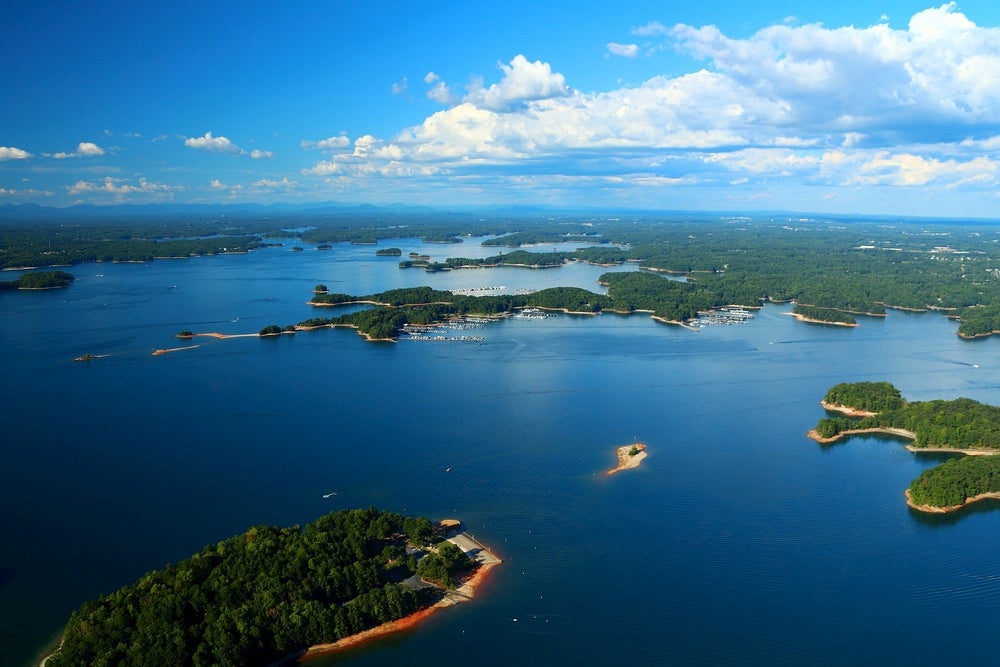 Lake Sidney Lanier is only 45 minutes north of Atlanta, making Lake Lanier camping a popular summer pastime. The man-made reservoir formed in 1956 when… 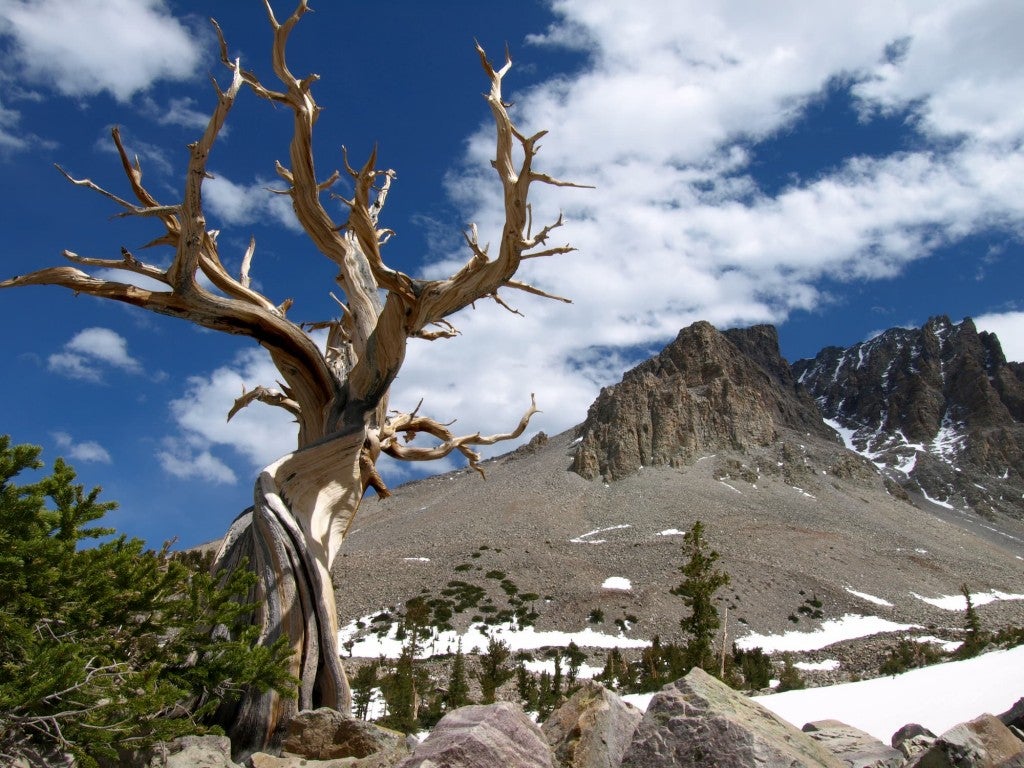 The Most Under-the-Radar National Park is Hiding in Nevada

Great Basin National Park might be Nevada’s best-kept secret. It’s one of the least-visited parks annually, which translates to few crowds, quiet trails, and stunning…