Freak Out Your Friends with These 13 Scary Campfire Stories 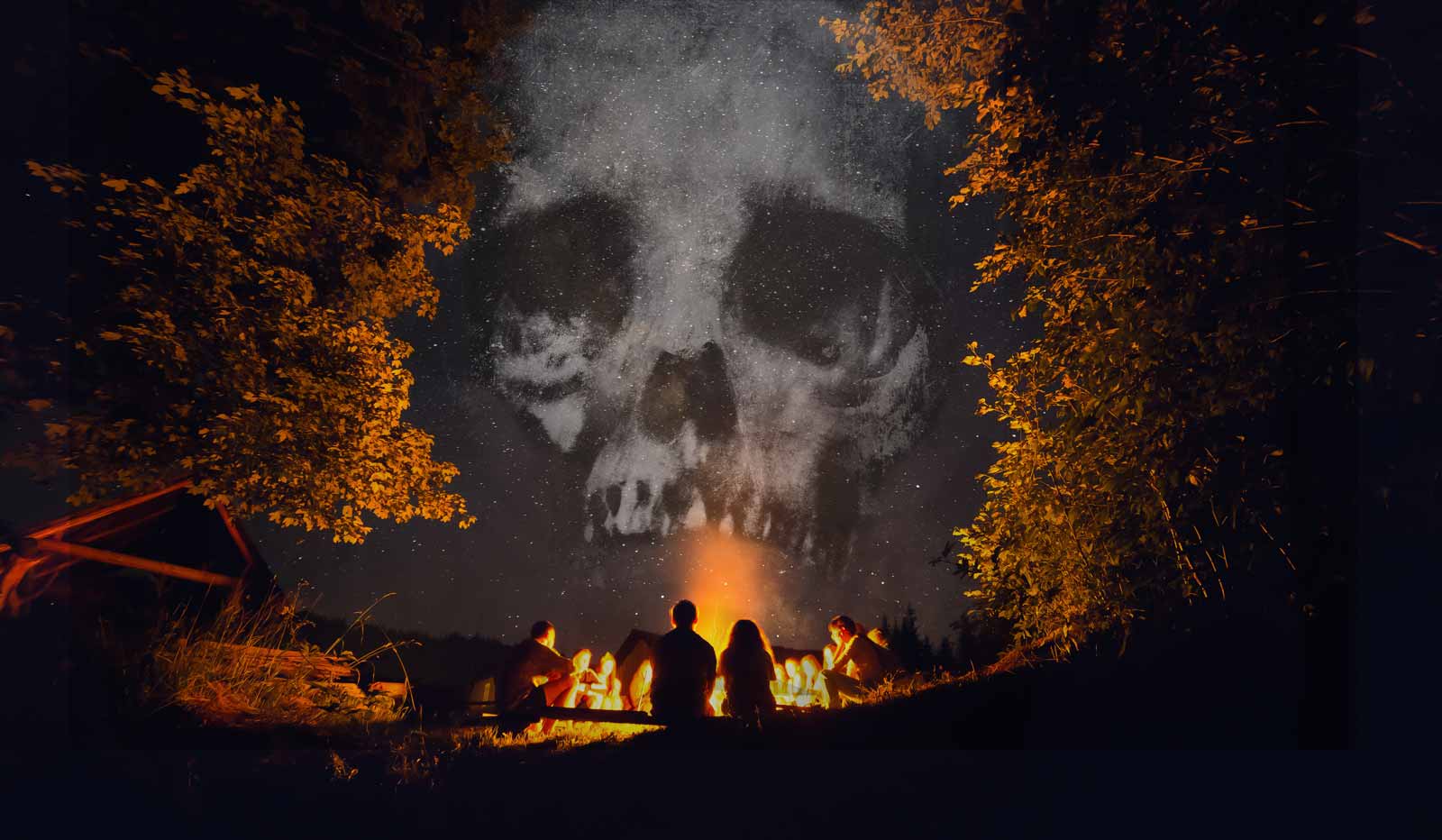 This article is brought to you by Banner & Oak, a company with deep expertise in headwear. Their ladies hats are the perfect addition to your next camping trip.

Seriously spooky (and sometimes cheesy) campfire stories are a classic way to pass the time while camping. Paired with campfire desserts, a cozy blanket, and a captive audience, these 13 stories bring everyone together—and not just because you’ll be afraid to return to your tent.

Freak Out Your Friends with These 13 Scary Campfire Stories

Take caution and pick your stories wisely if you’re camping with the kids. Some of these are seriously frightening. If it’s an adults-only trip, then break out the cocktails and dive in.

Either way, the experience of sharing stories around the campfire is sure to be a memorable one.

1. The Wolf Girl of Devil’s River

This Texas-based scary campfire story dates back to the 1800s. The story of “The Wolf Girl“ is centered around the notoriously haunted Espantosa Lake, often avoided by travelers who fear the ghostly fog that covers the lake each night. In 1845, a young boy reported seeing an unclothed girl devouring a goat alongside a pack of wolves. The girl was later captured by cowboys who tried to lock her in a shack. She escaped in the middle of the night, and the wolf girl has never been found.

“The Creak” is less of a scary campfire story and more of a creepy poem, making it pretty easy to remember. It also relies on a giant jump-scare at the end, so this one is great for those with some theatrical storytelling abilities. The poem is all about simple sounds, and all the scary things they could be, perfect for keeping your friends and family up all night with worry.

This scary story is perfect for campfires near a river. In Mexican folklore, La Llorona (The Weeping Woman) is the ghost of a woman who lost her children. The tale says she wanders near the river, looking for her children. La Llorona is said to kidnap children who wander near, as she mistakes them for her own.

The Deer Woman is a modern scary campfire story based in Native American mythology. The deer woman is a shape-shifting creature living deep in forests. Appearing either as a deer or a woman, she lures unsuspecting lovers or promiscuous men into the woods, then stomps them to death with her hooves.

Be sure to tell this one on your next beach camping trip: in this Hawaiian legend, night marchers are the deadly ghosts of ancient warriors. They are said to rise up from the ocean and march to ancient battle sites after sunset. The legend states that any mortal who looks directly at the night marchers will die a violent death.

Based on an urban legend, this scary campfire story appears in the infamous Scary Stories to Tell in the Dark by Alvin Schwartz. A tale told to make your skin crawl, “The Red Spot” is about a young girl who wakes up to find a spider bite on her cheek. We’ll let you guess what happens next.

As if the title isn’t terrifying on its own, this quick and scary campfire story follows a couple who get stuck in the mud during a rainy drive. They find themselves in — you guessed it — Axe Murder Hollow. Ending in a cliffhanger, whether the couple makes it out alive is up to your imagination.

Creepy enough to become its own short film, “The Smiling Man” tells the story of a young man who goes on a simple evening walk. He runs into a man in a suit who is staring at the sky, smiling. The good news is this scary campfire story doesn’t end in a violent death. The bad news is there isn’t much resolve either.

This scary campfire story is another one that comes in poem form. Sinister indeed, “The Rustling Corn” tells the tale of a shortcut home turning into the stuff of nightmares. What’s hiding in the cornfield is left up to the listener’s imagination.

This Reddit-born story puts a modern twist on the classic scary campfire stories we know so well. “An Open Wi-Fi Connection,” tells the story of a group of friends camping in the woods who, unsurprisingly, connect to an open Wi-Fi network. Sounds innocent enough at first, but this supposedly true story takes a creepy turn.

(You might be less inclined to connect to wifi at a campground in the future.)

Another Reddit contribution, “The Lucienne Twins,” is a tale retold after 10 years time. A first-year kindergarten teacher has a set of twins in her class. But after one twin dies in a tragic accident, the other finds a mysterious connection to the afterlife.

Sometimes known in American lore as “The Hairy Toe” or “The Skinny Toe,” this scary campfire story appears as “The Big Toe,” in Schwarz’s Scary Stories to Tell in the Dark. In Schwarz’s version, a little boy finds a toe in the ground and brings it to his mother. She decides it would be a nice addition to their soup for dinner. The only thing more disturbing about this story is the jump scare at the end when the original toe owner comes back to haunt them.

This urban legend is probably the most unsettling of these scary campfire stories. Set in Ohio, The Seventh Barn is believed to be the site of the murder of an entire family. The legend tells of a wealthy farmer who built a new barn each time his wife had a baby. They were expecting their seventh. However, the farmer’s wife and child died during the birth. Struck with grief, the farmer murdered the remaining members of his family. The barns were torn down and the land was sectioned off and sold, except for the seventh barn. It is said the seventh barn still stands, haunted by the farmer’s ghost.

Rustling leaves, howling wind, and a full moon will help make your retellings all the scarier. So gather everyone around a fire and tell them to listen close. These 13 scary campfire stories should give you plenty of armament to terrify your friends and family at your next camping trip.

Their snapback trucker hats is the perfect addition to your next adventure to a hot spring. 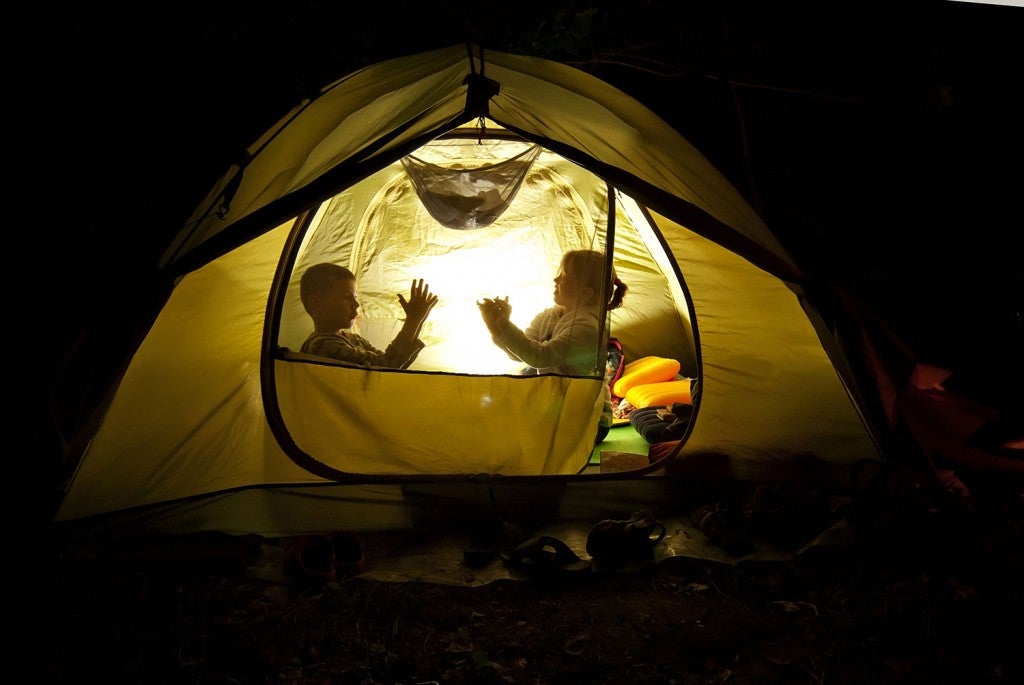 These backyard camping ideas were brought to you by Wenzel. Their wide variety of tents and screen houses can fit the whole family in the… 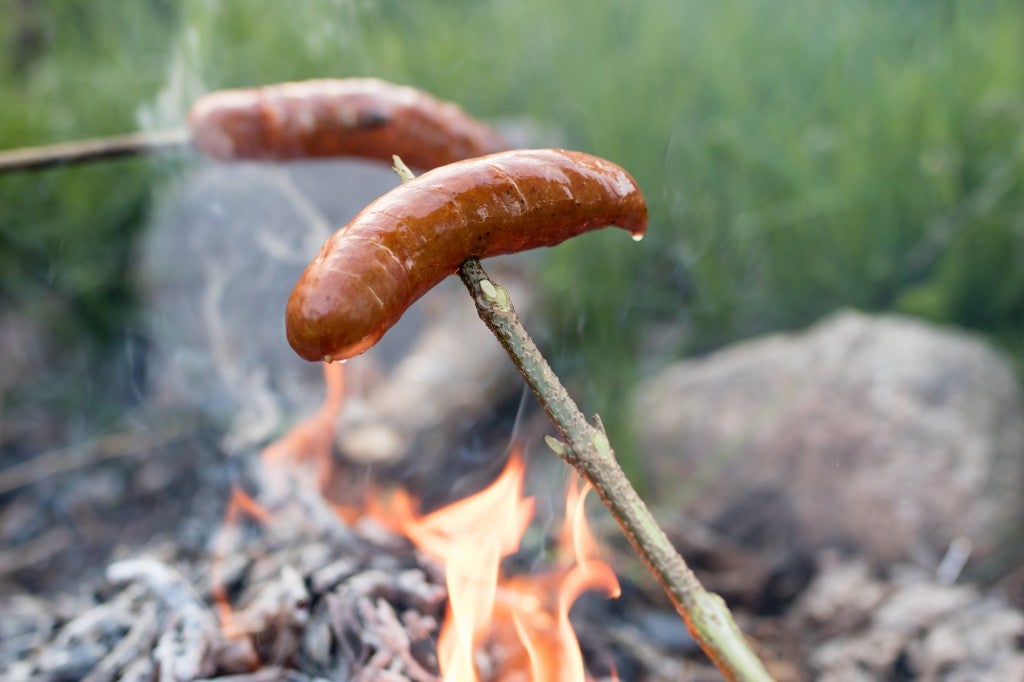 This article on the best sausage to grill over your campfire is brought to you by Grubstick. Grubstick’s hot dog fork are the first telescopic…