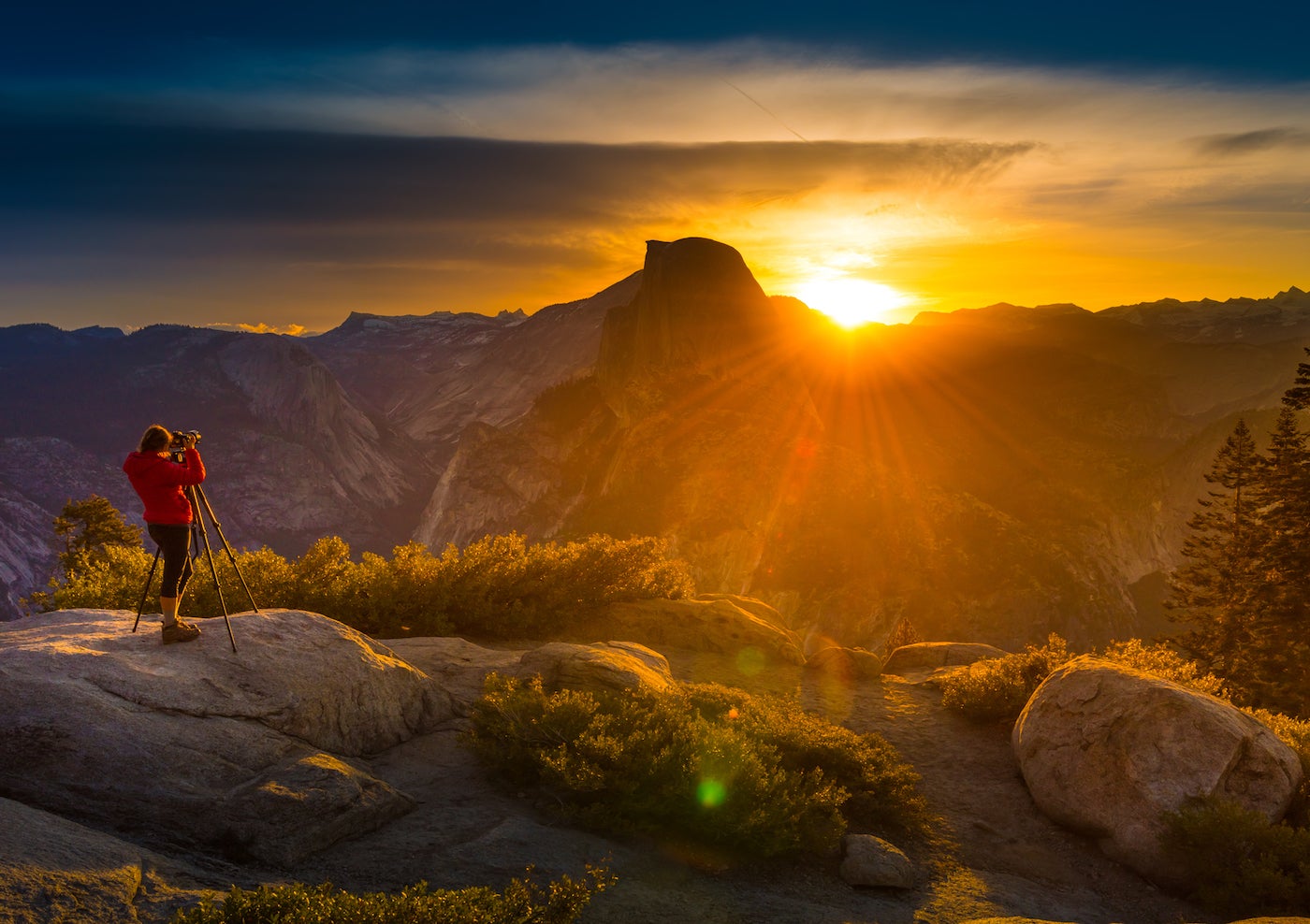 This post on the history of National Parks photography was brought to you by our friends at Matador, the makers of ultra-light, ultra-packable gear from backpacks to camera cases. They know that to go far, it helps to travel light.

Even if you’ve never been to a single National Park, you probably know some of their best features. The slick, alien elliptical known as Half Dome in Yosemite, the titular red stone formations of Arches, the multi-layered, funhouse wriggles of Zion’s slot canyons. Social media enhanced the fame of our National Park’s stunning landscapes— but it wasn’t Instagram that made these places instantly recognizable.

We’ve been snapping photos while camping in National Parks for over a hundred years, since before there was such a thing as a national park.

Photographers were capturing the unique drama of the American landscape long before any movement to preserve land for conservation or recreation. In fact, it was photography in large part that helped sell Congress, the President, and the public on the idea that these wild places should be protected from the railroads and industrialists who initially surveyed them.

Back then, landscape photography was a little more involved than pulling your phone out of your pocket — even more involved than setting up your SLR to for one of those stunning long-exposure shots with the lit up tent and the stars glowing above.

The Birth of National Parks Photography

When a young photographer named Carleton Watkins went to Yosemite in 1861 with his daguerreotype in tow, he needed a mule team to carry all the supplies, including enormous glass plates onto which his landscapes would be developed. Turns out, toting those tons of chemicals, tripods, tools, and glass was well worth the effort.

Both photography and the idea of the Western frontier were still brand new at a moment when the country was weary of the Civil War. Americans were badly in need of a little optimism and a collective vision for the future. Watkins’ work went on to inspire not only more famous artists like Ansel Adams and William Henry Jackson, but also to persuade the public and the government to see Yosemite as more than another mine or logging forest. Here were geysers and rock faces and thermal pools unlike anywhere else on earth, unspoiled and almost unreal.

For the first time, people didn’t have to take explorers at their word or imagine these far-off places from drawings or paintings.

IMPROVE YOUR NATURE PHOTOGRAPHY WITH TOP TIPS FROM FULL-TIME CAMPERS

Instead, they could see the wonders of Yosemite for themselves in galleries back east, printed in magazines and newspapers, plastered across postcards and stamps sent home by loved ones lucky enough to see the real thing first hand.

Less than a decade after Watkins photographed Yosemite and under a year after Moran’s expedition to Yellowstone, the first National Park was officially founded, with many more to follow. Meanwhile, National Parks photography was proliferated through the spread of posters, commemorative plates, souvenir patches, in 3D stereograms, and books.

By 1900, you no longer needed a mule team to haul in a professional photography studio— visitors could bring along their own portable Brownie cameras to document the new parks for themselves. That’s the same camera that Adams used in his early work, when he was absorbing his “first impression of the valley—white water, azaleas, cool fir caverns, tall pines and stolid oaks, cliffs rising to undreamed-of heights.”

He later said that first visit to Yosemite changed his life, and “from that day in 1916 my life has been colored and modulated by the great earth gesture of the Sierra.” Indeed, he would spend much of his career attempting to convey in photos that initial “culmination of experience so intense as to be almost painful.”

Despite a hundred-year history of photography and National Parks, many people still get a little nervous about taking their nice camera equipment out into the wild. If you aren’t an experienced outdoor photographer, you might feel it’s best to play it safe and only bring along your smartphone.

But it’s totally possible to find your photography sweet spot, somewhere in between you iPhone and Watkins wagon train of gear. There are plenty of ways to keep your kit safe. Matador, for example, makes SLR base layer camera cases— think little puffer coats for your camera that keep out the dust, damp, and extreme temperatures that can challenge even the most rugged electronics.

In many ways, National Parks and photography grew up together. The two emerged just a few decades apart and both grew rapidly in popularity and accessibility. Now you can find articles offering advice on the best locations and time to get iconic shots.

Of course, not everyone is inspiring the masses with their photos and videos of national parks—like the man who was caught taunting a fussy bison in traffic. Sometimes, people capture what NOT to do in these precious places. As more and more people visit national parks with cameras in hand, the park service has had to work out policies on everything from commercial photography to the use of drones.

Still, photos and video have transformed not only our knowledge of the landscape, but how we can interact with it. Photography has continued to be an important tool in rallying the public around the preservation of wild spaces that are under fresh threat, like Bears Ears National Monument. Who knows— next time you head outside with a camera in tow, you might just take a photo that helps shape the next hundred years of national parks history.

You can win free gear from Matador and 20 other brands by reviewing campgrounds on The Dyrt. Share past camping experiences, photos, and videos to earn points towards monthly prizes in The 2018 Great Camping Giveaway! 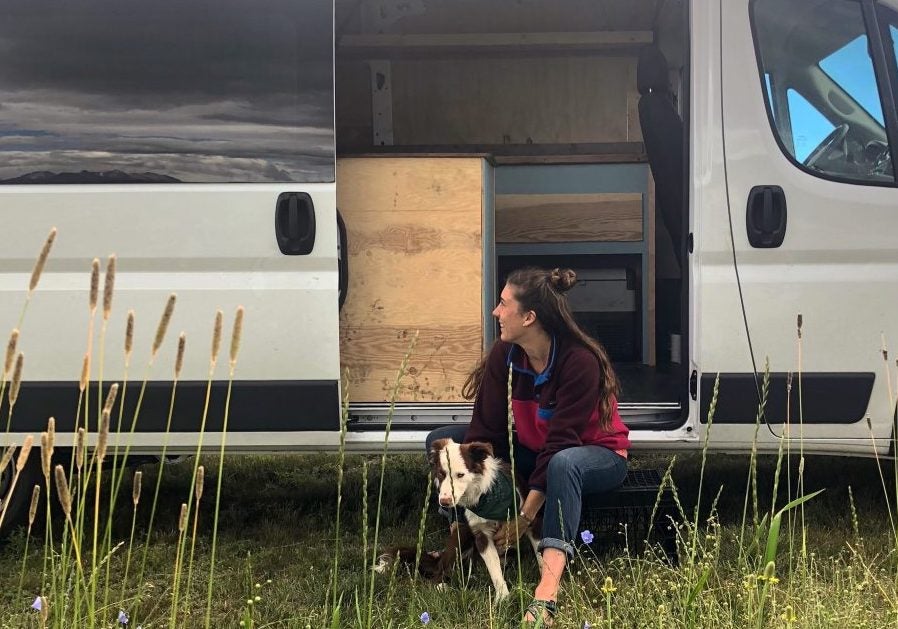 Why I Ditched My City Apartment for Living in a Van

It may seem outlandish, but to us, it’s a dream. If you don’t feel like trading in your house for 40 square feet, you can… 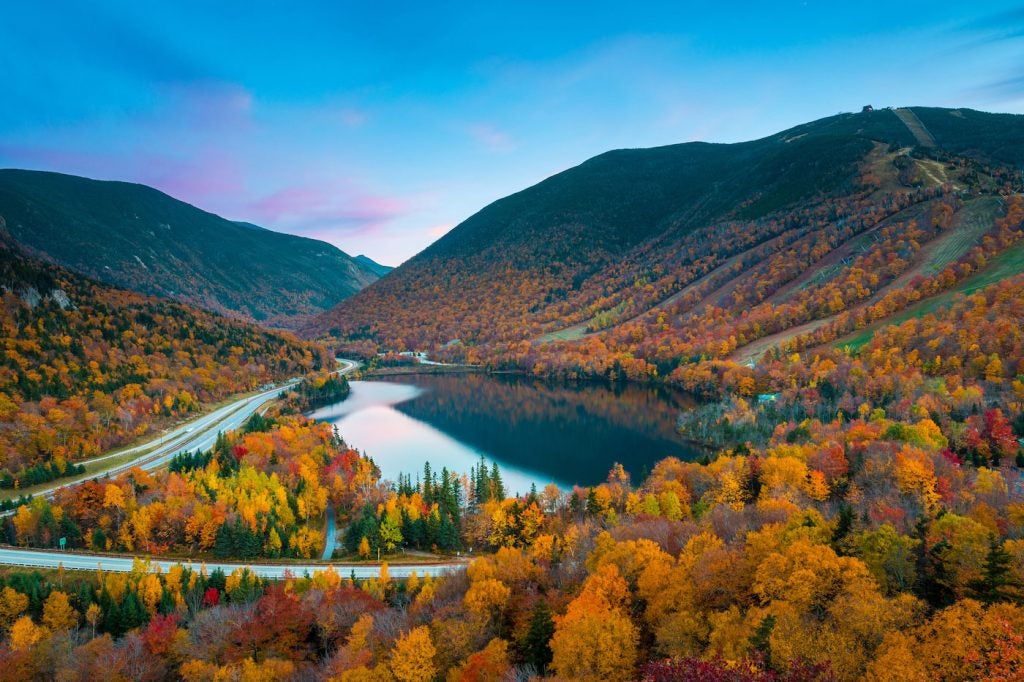 5 New Hampshire State Parks that are Perfect for Fall Camping

This article on New Hampshire State Parks is brought to you by our friends at RoM Outdoors, who make multi-purpose gear so you can manage…