This 305-Acre Campground & Park is in Downtown Jackson, Mississippi 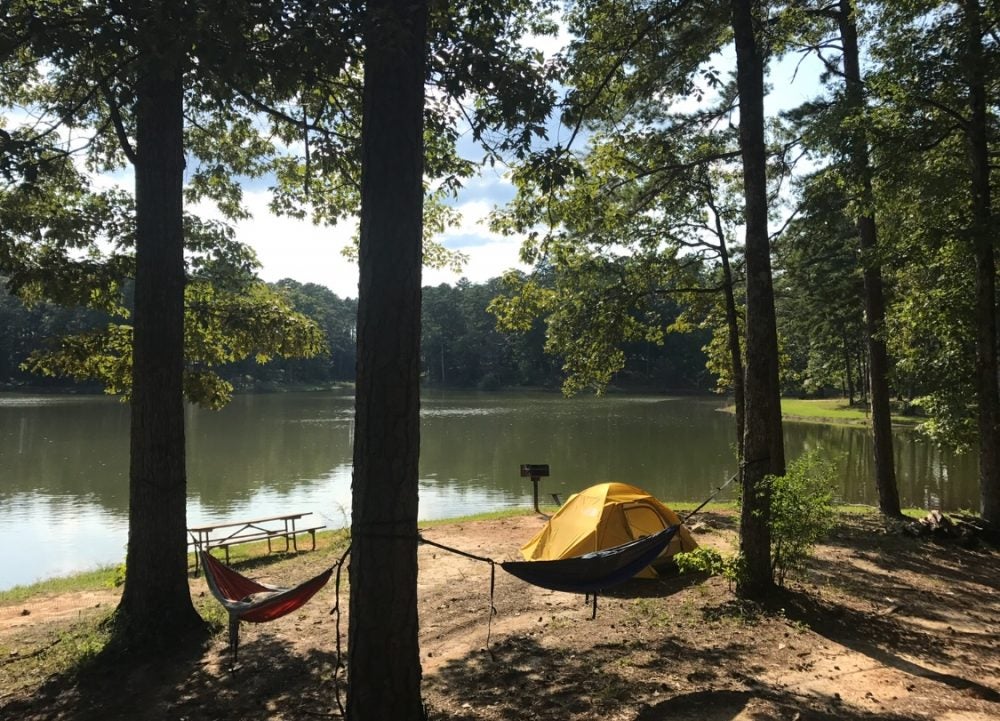 This article is brought to you by our friends at IceMule Coolers, who make the best insulated backpack cooler to accompany you on hiking and camping trips. Designed to keep contents cold for 24 hours, IceMule’s coolers are tough enough to withstand even a Mississippi summer at LeFleur’s Bluff State Park.

Mississippi isn’t exactly known for being an outdoor recreation hotbed—at least not the way other states like Colorado, Utah, and Oregon are celebrated for their 14’ers, ski slopes, and have-tent-will-travel ethos. That’s a darn shame, however, given that 58% of Mississippians enjoy outdoor recreation, and spend a whopping $8 billion on playing outside each year.

One reason so many Mississippians are able to get out and enjoy their state is that you don’t necessarily have to go far to go camping. In fact, you don’t even have to leave the city limits if you’re in Jackson, Mississippi. LeFleur’s Bluff has been a fixture in downtown Jackson since the city was founded. Now it’s home to tent and RV campsites, group pavilions, a disc golf course, a regular golf course, and lots and lots of trails. 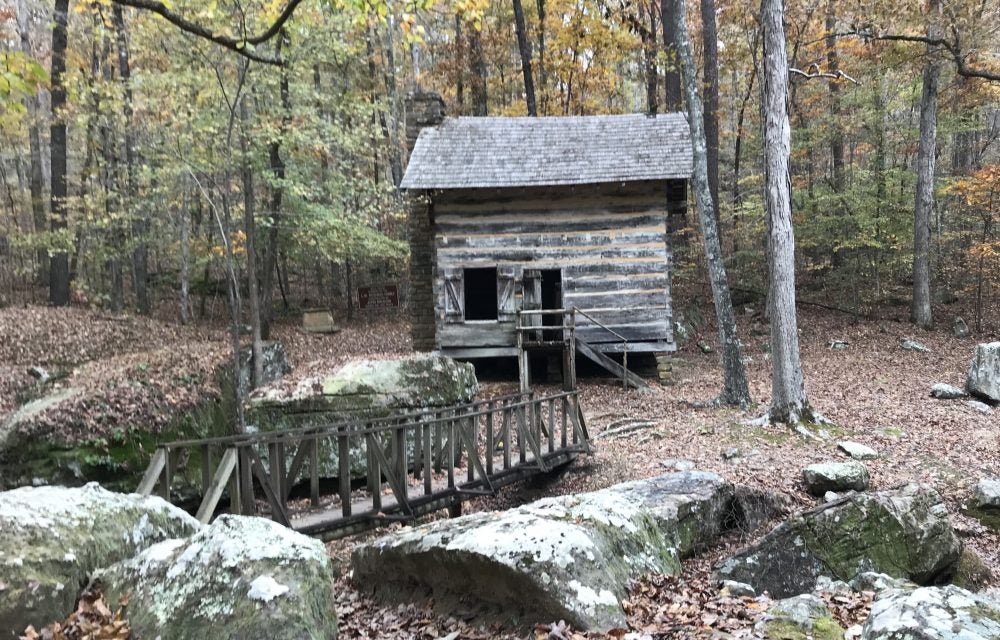 The story of LeFleur’s Bluff State Park is an exciting one, shot through with battles, betrayals, and even hints of the supernatural.

Louis LeFleur was trader who traveled up and down the Natchez Trace Trail and area riverways, delivering goods to the Choctaw people and the few white settlers in the region. Around the turn of the 19th century, he founded a permanent settlement and trading post at what is now Jackson, Mississippi. In 1801, he also founded another trade settlement and inn further northeast along the Natchez Trace.

Like other early traders in the Southeast, such as Chattanooga, Tennessee’s founder John Ross, LeFleur developed a close relationship with the local tribes. He didn’t just trade with the Choctaw, but considered himself a member of their Nation, even serving in Choctaw regiments under Andrew Jackson.

Less than 30 years after his arrival, LeFleur’s son Greenwood was elected as a Choctaw Chief at just 22 years old. However, his legacy within the tribe would not be as well-remembered as his father.  Greenwood was one of the men who oversaw the signing of the Treaty of Dancing Rabbit Creek, which formally turned Choctaw territory into the property of the United States.

Many Choctaw viewed this as a betrayal, especially when Andrew Jackson forced numerous tribes in the Southeast to travel the Trail of Tears to Oklahoma. Though Greenwood continued to live a prosperous life as a slaveholder and plantation owner, the story goes that angry Choctaw exhumed his body after death and reburied him in a secret location, placed face down to shame him.

Eventually, the settlement named for LeFleur became a city named for Andrew Jackson, and Mississippi became the country’s 20th state. As Jackson went on to grow and flourish, the city built an asylum for the mentally ill, which sat three miles from where LeFleur’s Bluff State Park is today. Don’t worry though— there are many haunted campgrounds in America, but LeFleur’s Bluff isn’t one of them.

After the asylum closed in 1935, the land was parceled out for different uses. The actual site of the old hospital is now the University of Mississippi Medical Center. In the early 1940, approximately 300 acres were transformed into Riverside Park, as LeFluer’s Bluff State Park was known for 40 years. During the 1970s, the golf course was added, and a decade later, the land was officially designated a state park, honoring Jackson’s original founder with the name LeFleur’s Bluff State Park.

There are many reasons to check out LeFluer’s Bluff State Park, whether you’re a first-time camper looking to ease into the great outdoors with a little staycation, a thru-hiker tackling the Natchez Trace Trail, or an out-of-town visitor looking to get the best of both worlds.

Here is a list of what you can see and do when you pay LeFleur’s State Park a visit: 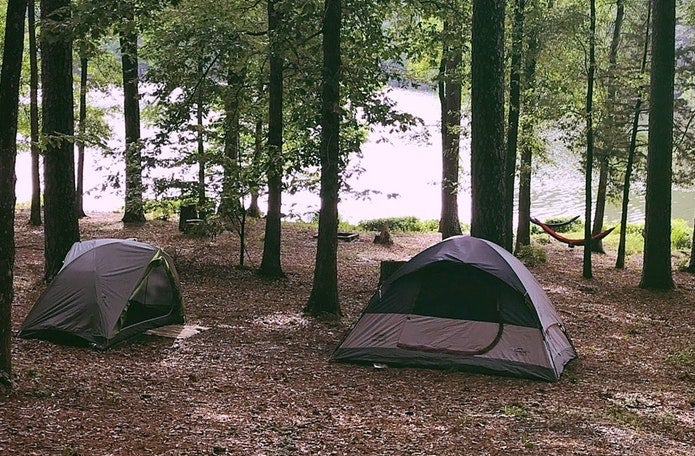 Even some of the country’s most “outdoorsy” cities don’t have a place for you to camp in their urban greenspaces. Forest Park in Portland might be one of the biggest hiking destinations within major metropolitan city limits, for example, but there’s been a whole movie made about how you can’t camp there. But Jackson makes it easy to reach camping without driving far. You can even camp without a car—though Jackson’s public transit isn’t the most accessible.

There are ten shaded primitive tent sites in LeFleur’s Bluff State Park, close to Mayes Lake, a nice spot to go fishing, paddling, or swimming. There are also twenty-eight sites available for RV and tent camping, each with electrical and water hook-ups, as well as a bathhouse with hot showers and a central sewage dumping station. RV campers are welcome to make reservations for up to a month at LeFleur’s Bluff State Park.

Campers with disabilities and day users with mobility impairments can feel confident at LeFleur’s Bluff. Accessible amenities include the Kids Zone bathrooms, the playground, pavilion restrooms, all three fishing piers, and the .5 mile nature trail behind the Mississippi Museum of Natural Science.

Alcohol isn’t allowed, unfortunately. You can enjoy some of the best beers in the Magnolia state at Lucky Town Brewing Company, Lazy Magnolia, and Jackson Beer Company a short ways from LeFleur’s Bluff. Just don’t get caught with an insulated backpack cooler full of suds by the folks at LeFleur’s.

“Great place to camp. Right in the middle of Jackson MS. quiet, great day time area with playground amid picnic spots across the lake from the campground. Bathhouse in good condition. pads are level and clear. nice space between each site. Shady and clean.” –The Dyrt camper Fran M. 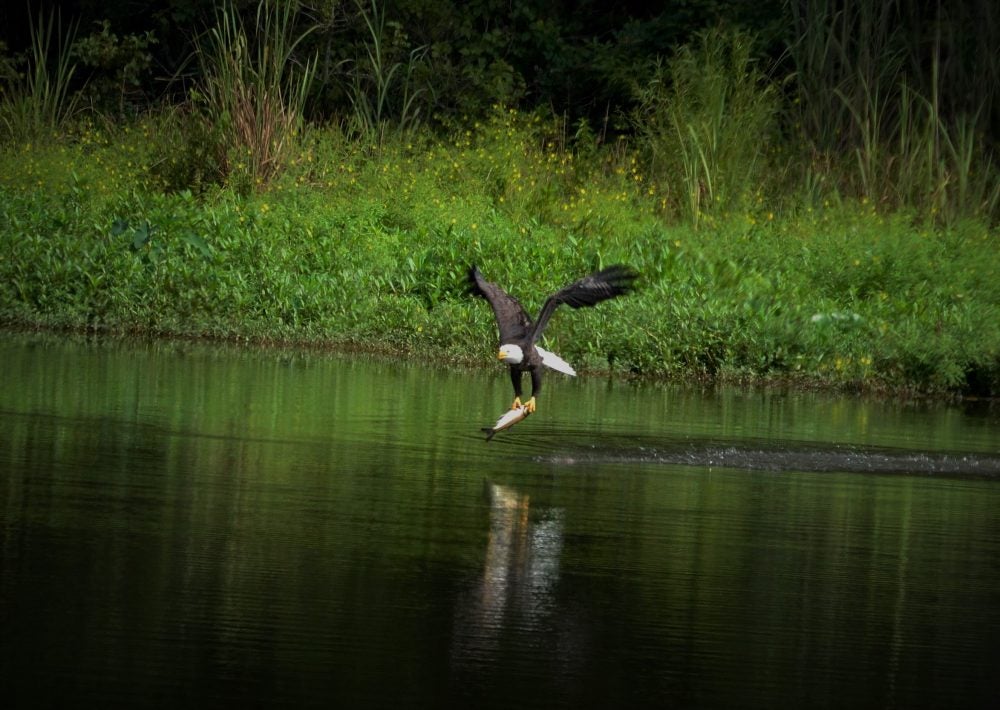 The Pearl River Trail is a nice half mile hike that winds along the shores of Mayes Lake. This is a great pick if nature calls you frequently—both in the sense of wanting to be outside a lot AND it’s also the only trail in LeFleur’s Bluff State Park that has a restroom along the way. Follow the purple blazes to Mayes Lake Camp Store, and the rest of the LeFleur’s Bluff campground.

The Cypress Swamp Trail, marked with blue blazes, is just .36 miles long, but goes over a variety of terrain, including over the titular wetlands via boardwalks and steps. Work your way down from the bluff to an old channel of the Pearl River that, over thousands of years, is slowly filling in.  You might see alligators swimming between the hardy bald cypress and water tupelo, and in the fall the whole swamp puts on a spectacular color show.

On the last portion of the Cypress Swamp Trail, before it connects to the Old River Run Trail, is an area called Fossil Gulch. Here you can catch a glimpse of the area’s geologic history, dating back millions of years to when this area wasn’t a swamp, but instead a much deeper inland sea.

The Old River Run Trail is also about .3 miles long, but connects to the Cypress Swamp and Overlook Loop Trails if you want to go further. It doesn’t loop, so prepare to hike out and back or consult your map carefully. Follow the red blazes to see stands of hardwood trees and paw paws—a kind of fruit tree native to the Southern United States— that fill in the land between the slough and Eubanks Creek.

The Overlook Loop is where you can get a good vantage point of LeFleur’s Bluff State Park from the MDWFP Museum of Natural Science. The museum is also a great place to learn about some of the Mississippi ecosystems you see throughout LeFleur’s, and it’s home to 200 species in their aquarium, indoor swamp, and other exhibits.

The Old Pond Trail is quite short, at just .16 miles, but like the rest of LeFleur’s Bluff State Park offers a chance to spot members of Mississippi’s diverse bird population. You might see thrushes, acadian flycatchers, red-eyed vireos, northern parulas, two types of warblers, summer tanagers, egrets, storks, and even yellow-crowned night herons. 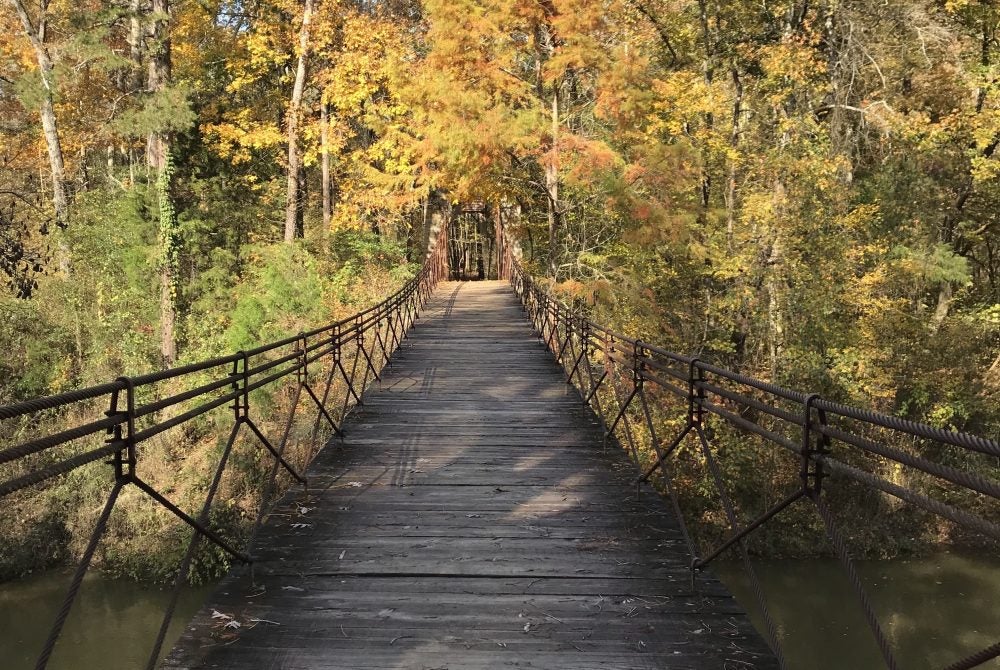 When it’s complete, the Museum Trail will be a pedestrian artery for the neighborhood known as the LeFleur Museum District. It will also be mixed-use, open to walkers, cyclists, skateboarders, and all other non-motorized traffic.

Balance The Adventure With Leisurely Fun 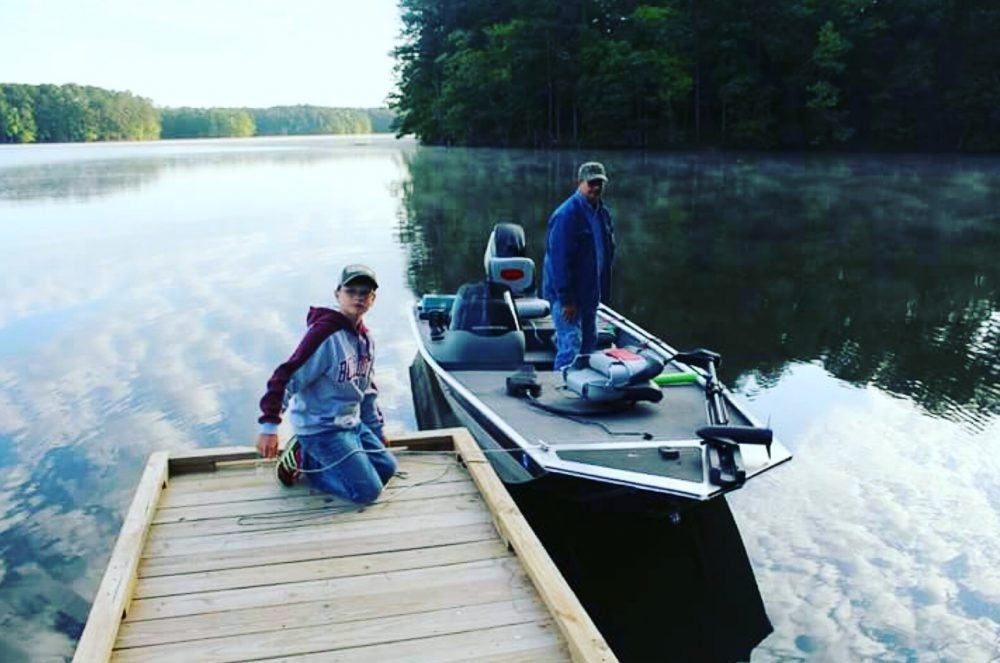 There’s lots to do in LeFleur’s Bluff besides camp and hike.

Stock up for whatever outdoor activities you plan to tackle at Buffalo Peak Outfitters, a locally-owned retailer that’s been serving Jackson’s outdoor community since 1986. They’re a member of the Grassroots Outdoor Alliance, so you know that the items you purchase there were chosen for their sustainability and reduced environmental impact. 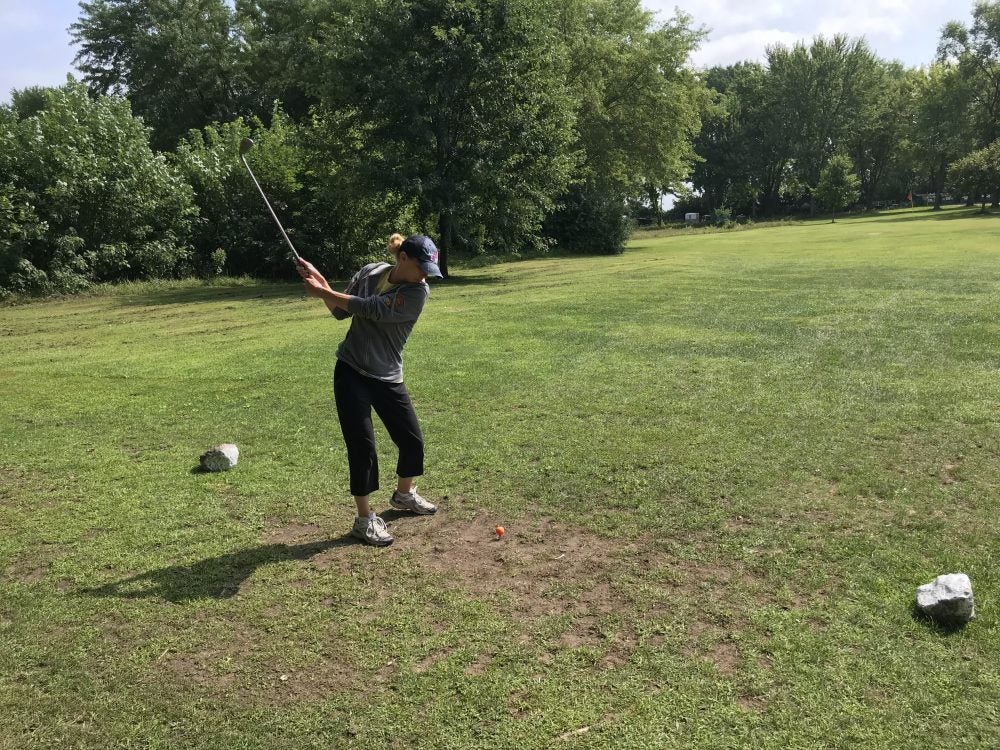 Photo from The Dyrt camper Melissa B.

Out of thousands of state parks across the country, there are only about a hundred golf courses within their boundaries.  LeFleur’s Bluff State Park is one of the few to boast greens. It’s a 9-hole course and driving range, all convenient to Interstate 55.

The LeFleur Golf Course was renovated in 2012, with fresh attention paid to its grasses and landscaping. However, you might want to visit soon. There have been rumblings in Jackson about the possibility of moving the city’s zoo from its present location in the Livingston Park to where the golf course now sits. No decision has been made, however, and any changes would take years to plan and put into effect. Still, if you like to hit the links, it’s hard to beat this opportunity for inexpensive, accessible golfing in pretty surroundings.

If you prefer throwing frisbees to swinging clubs, LeFleur’s Bluff State Park is also home to the Fossil Peak disc golf course. With eighteen baskets along a 5,000-foot long course, relatively flat terrain, and a few water hazards and technical, wooded shots thrown in the mix, there’s a little something for everyone. It’s pay to play, so fill up your insulated backpack cooler with your favorite snacks and sodas and head out for an afternoon of tomahawks, anhyzers, and pars.

You can still see the many layers of volcanic and marine sediment that made central Mississippi when you hike through LeFleur’s Bluff, especially the trails that drop down into the lowlands and look back up at the bluffs. You can also take in the way that Mayes Lake formed. Mayes Lake was originally part of the Pearl River, but between changes over time, the construction of levees, and decades of flood control, it was cut off from the Pearl and filled in as a lake.

You can win free gear from Icemule—like their insulated backpack cooler—and 19 other brands by reviewing campgrounds on The Dyrt. Share past camping experiences, photos, and videos to earn points towards monthly prizes in this year’s camping contest! 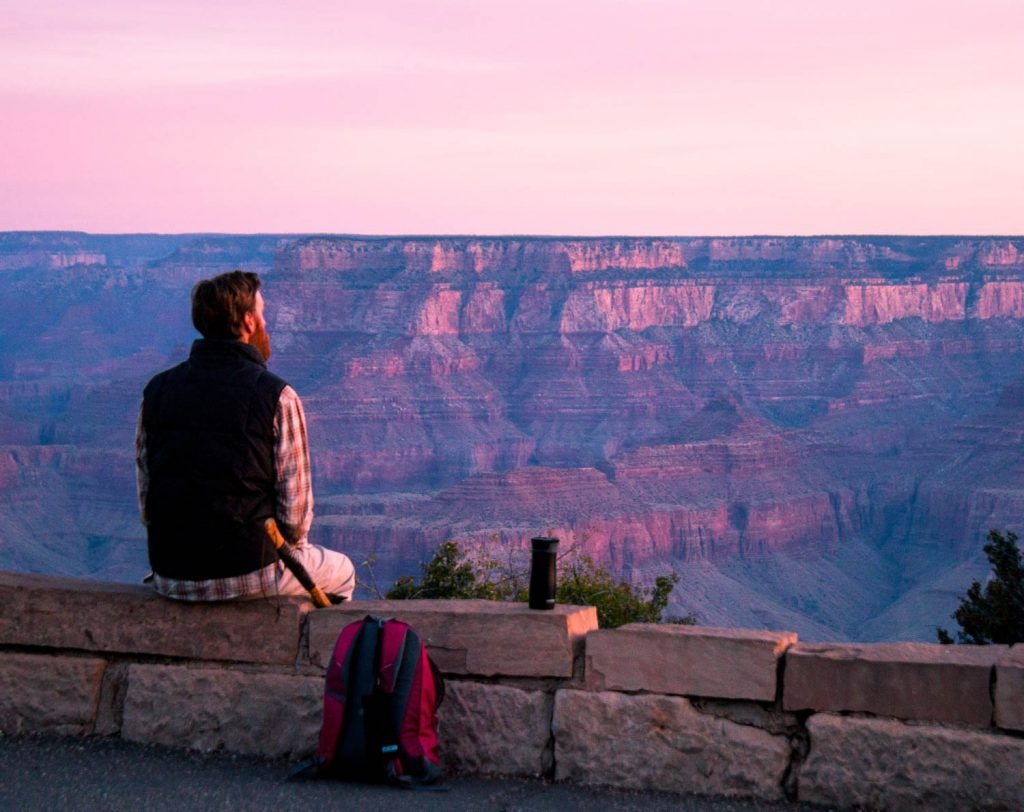 Play your cards right and you could still snag one of these campsites this weekend.  For months, you’ve been looking forward to that camping trip… 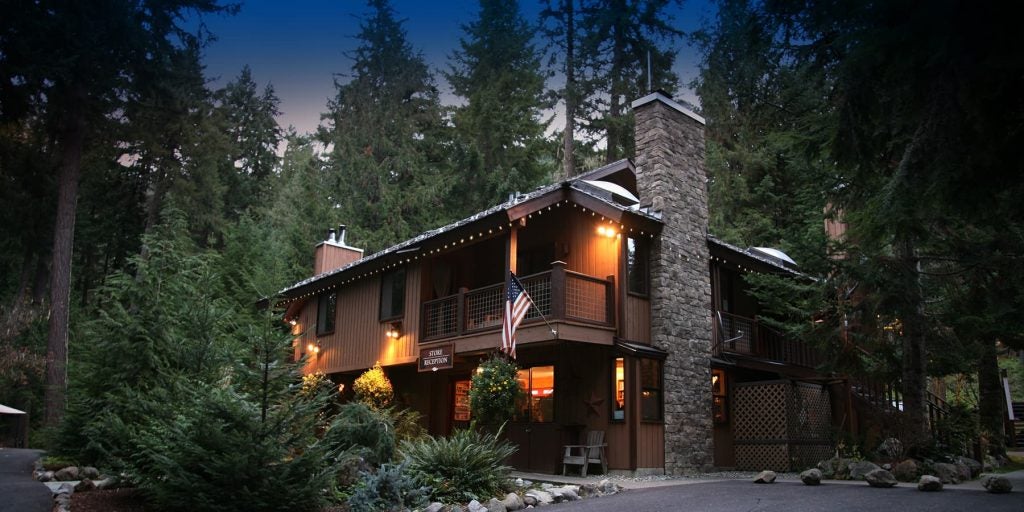 9 National Park Lodges Where You Can Bask in Historical Luxury

This article was brought to you by our friends at Ethnotek. They make everyday backpack and travel bags that seamlessly blend historic textile traditions with modern…