4 Chicago-Area Ghost Stories to Tell Around a Campfire 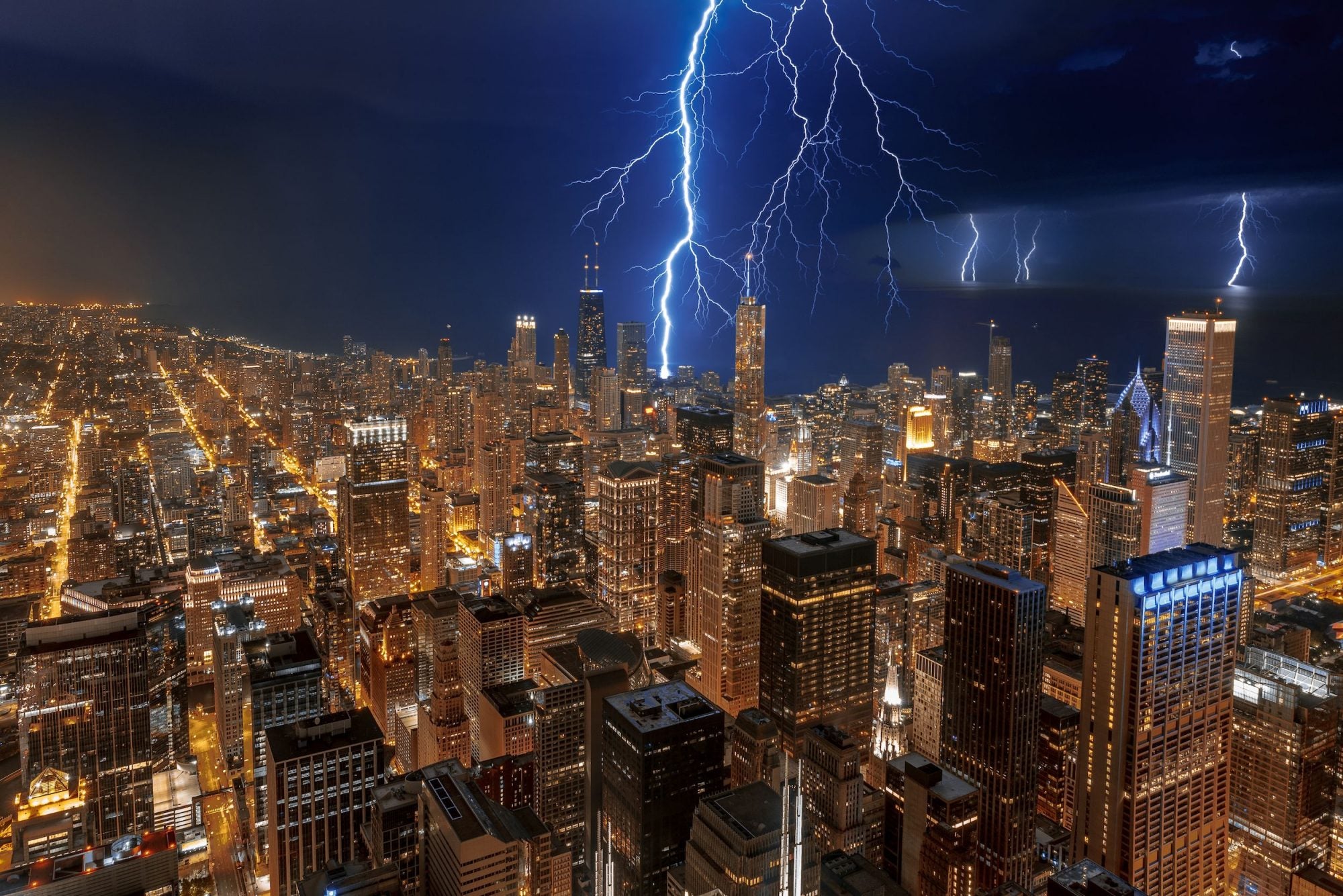 The majority of the fall season is full of suspense. To many, it all leads to October 31 when cities are full of costumed families, and campgrounds are full of bonfires, s’mores, and most importantly, campfire stories.

While Halloween is an awesome holiday to spend in the woods, the fun doesn’t have to stop once November arrives! Whether you spend this fall season enjoying a campfire at home, or taking in the fall foliage at a Cook County campground, these Chicago ghost stories will help set the mood.

Campers looking to take the extra step can use these Chicago ghost stories as a guide for hunting spooky specters, or at least be armed with scary Chicago-area tales to share with your trail mates.

4 Chicago Ghost Stories for Your Next Illinois Camping Trip

If you’re headed to a campsite near the Windy City this fall, break out these local Chicago ghost stories to send shivers down your spine before snuggling into your sleeping bag. 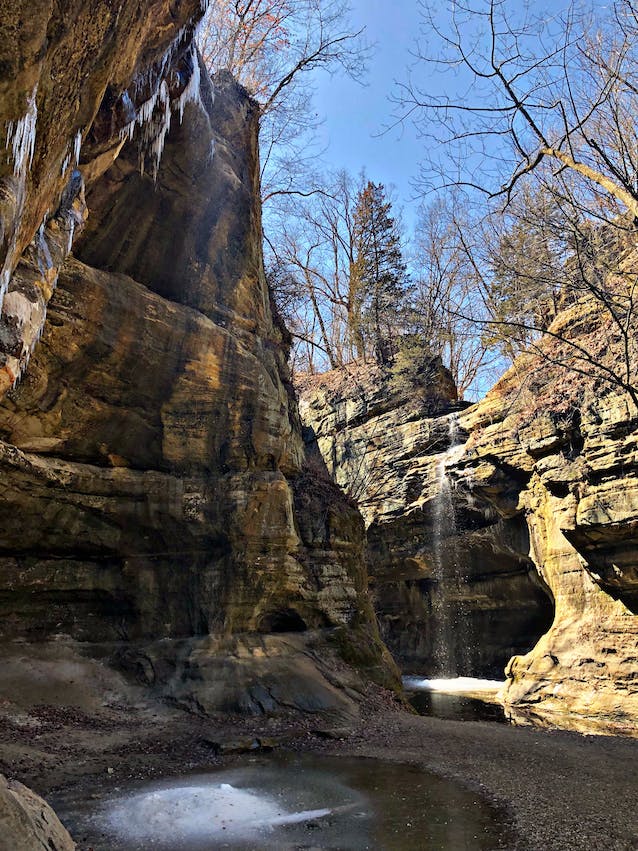 Image of Starved Rock State Park from The Dyrt camper Amber A.

As you walk through the 18 canyons of Starved Rock State Park you’re probably thinking about the trickling waterfalls and awesome sandstone formations. But do you know how the area got its name?

The legend goes that Ottowa tribe Chief Pontiac came to the region to attend a tribal council in the 1760s. There, he was reportedly stabbed by a member of the Illinois-Peoria which created a battle between the two tribes. As the Illinois retreated to a tall rock formation they were left without resources and many starved to death.

Visitors say you may spot the spirits of the deceased walking around the tops of the cliffs at the park or tentatively peeking over the edge as if looking for their opponents. 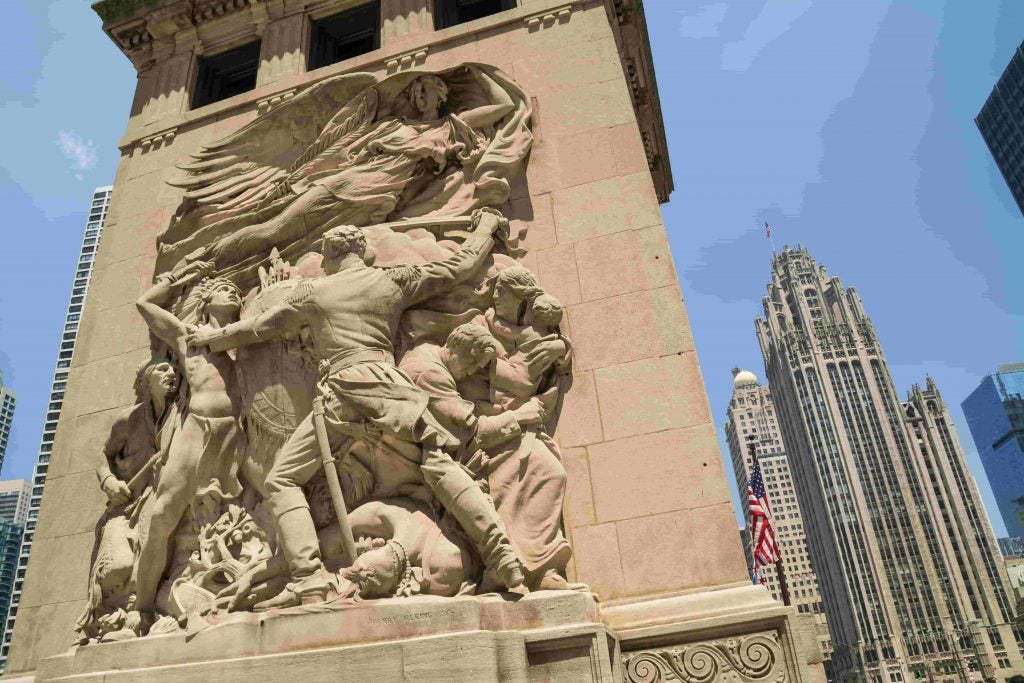 A Native American massacre monument on the site of Old Fort Dearborn in downtown Chicago, where the Potawatomi funeral dance came to an end.

In 1835, a group of 800 Potawatomi Native American warriors danced a sort of funeral ceremony alongside the Chicago River. According to the Chicago Tribune, they were honoring the loss of their land around Lake Michigan as they were removed from the area by the British.

The tribe was betrayed — they had sided with the Brits during the War of 1812 but were forced to retreat from land in Wisconsin and Illinois. The 5,000 warriors and families made their presence known as they danced their way to the East side of the Mississippi River and eventually to the Chicago River. It is said that the ghosts of the Potawatomi can still be seen dancing and chanting near Fort Dearborn where their original trek ended. 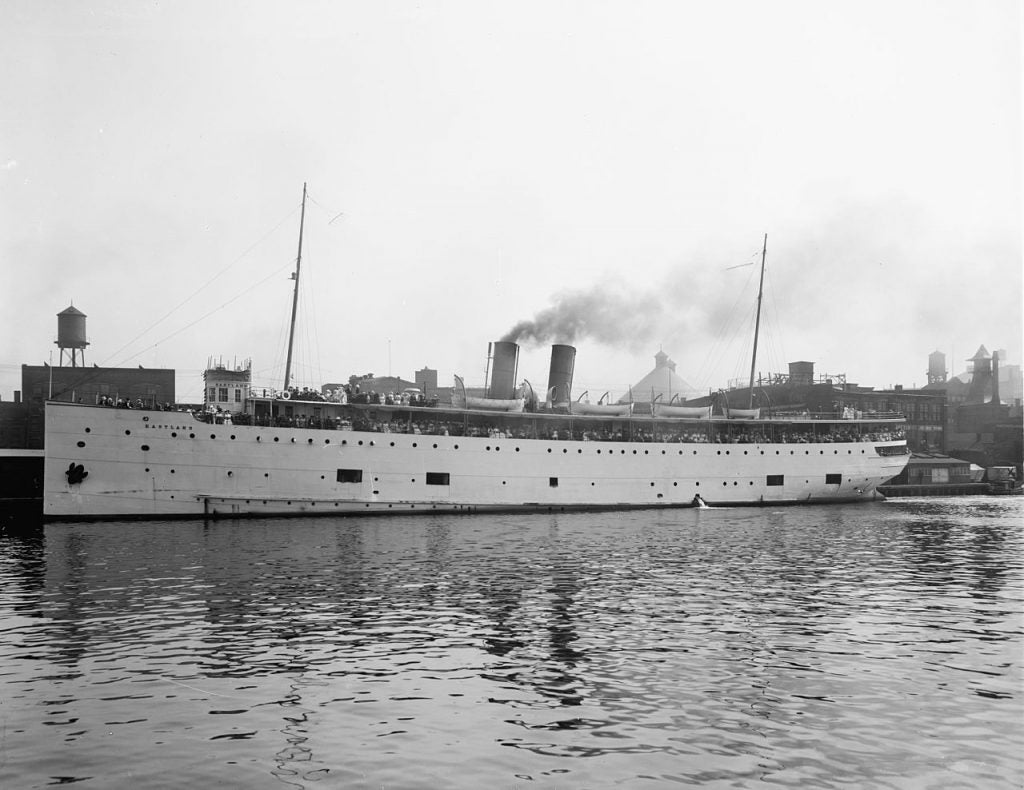 The S.S. Eastland, three years before its fatal accident on Lake Michigan

Nearly everyone has heard of the Titanic, but did you know that more people died when the S.S. Eastland sank in the Chicago River just three years later?

According to the Smithsonian, this 1915 tragedy occurred after 2,573 passengers boarded the massive ship on a day trip to a park 38 miles down the coast of Lake Michigan. Shortly after the vessel began boarding, the Eastland started listing to the side. Not 10 minutes later it was on its side underwater, still moored to the dock. Lucky passengers treated the now right-side-up hull as a gangplank and walked to safety but 844 passengers died due to a lack of lifeboats.

The Smithsonian reported that there were not enough hearses for the funerals that ensued, leading a young Marshall Field & Company to offer trucks for this purpose. The now-famous Bohemian National Cemetery in Chicago gained 150 new graves within days. Keep your eye out for passengers in turn-of-the-century garb as you enjoy lunch or stroll the Chicago Riverwalks. 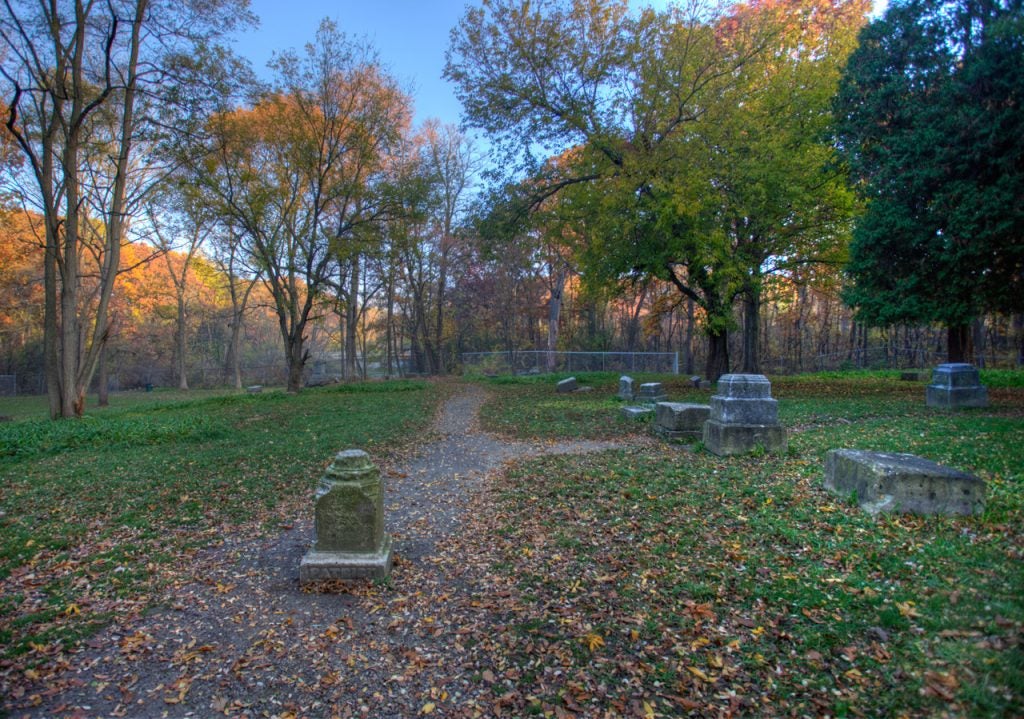 If you’ve ever been a fan of paranormal investigation shows you’ve likely heard of Bachelor’s Grove Cemetery. This 82-plot burial ground in Midlothian, IL, has been referred to as the “Most Haunted Graveyard in America.”

The area was a settlement for Scottish, Irish and English immigrants in the 1820s, and in 1864 they built the one-acre cemetery to bury the dead. It’s rumored that gangs hid bodies here in the 1920s, and by the 50s all burials had ceased. It was also used by local teens in the 60s as a spot for drinking and explicit activities.

Today, the grove is a member of the Cook County Forest Preserves. The long-neglected area is visited every year by thousands of wannabe ghost hunters looking to speak to the popular ghost of the “infant daughter” and other long-dead individuals whose neglected graves have sat there for decades. From orbs to full-bodied apparitions, just about every sign of the paranormal has been reportedly seen or heard here.

Hatie Parmeter is a current Chicagoan but will always be a Minnesotan at heart. She is the founder of <a href="http://www.whoamag.co/">Whoa Mag</a>, an online magazine about women who inspire others with their love of the outdoors. She enjoys paddling wood-canvas canoes in the BWCA and walking her dog Norah Jones. 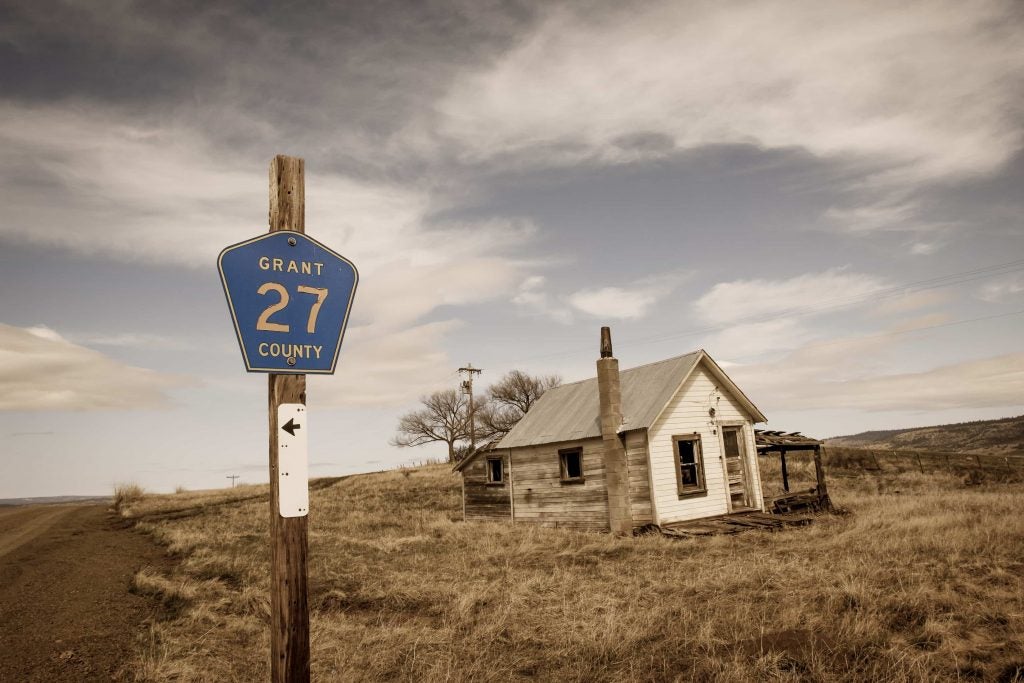 After the Lewis and Clark Expedition opened America to settlers seeking fortune, they arrived by the thousands, following, among other routes, the now-legendary Oregon Trail…. 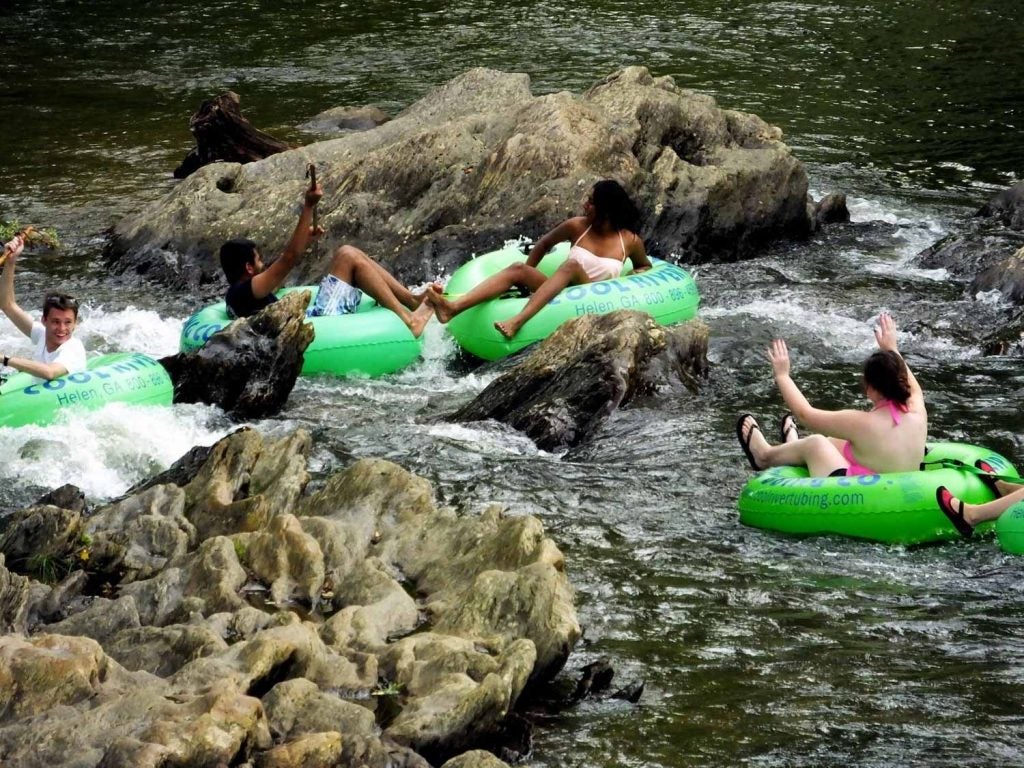 6 Spots Where You Can "Shoot the Hooch" in Georgia

“Tubin’ the hooch” or “shootin’ the hooch” is Georgia slang for Chattahoochee River Tubing, and it’s one of the most effective ways to cope with…