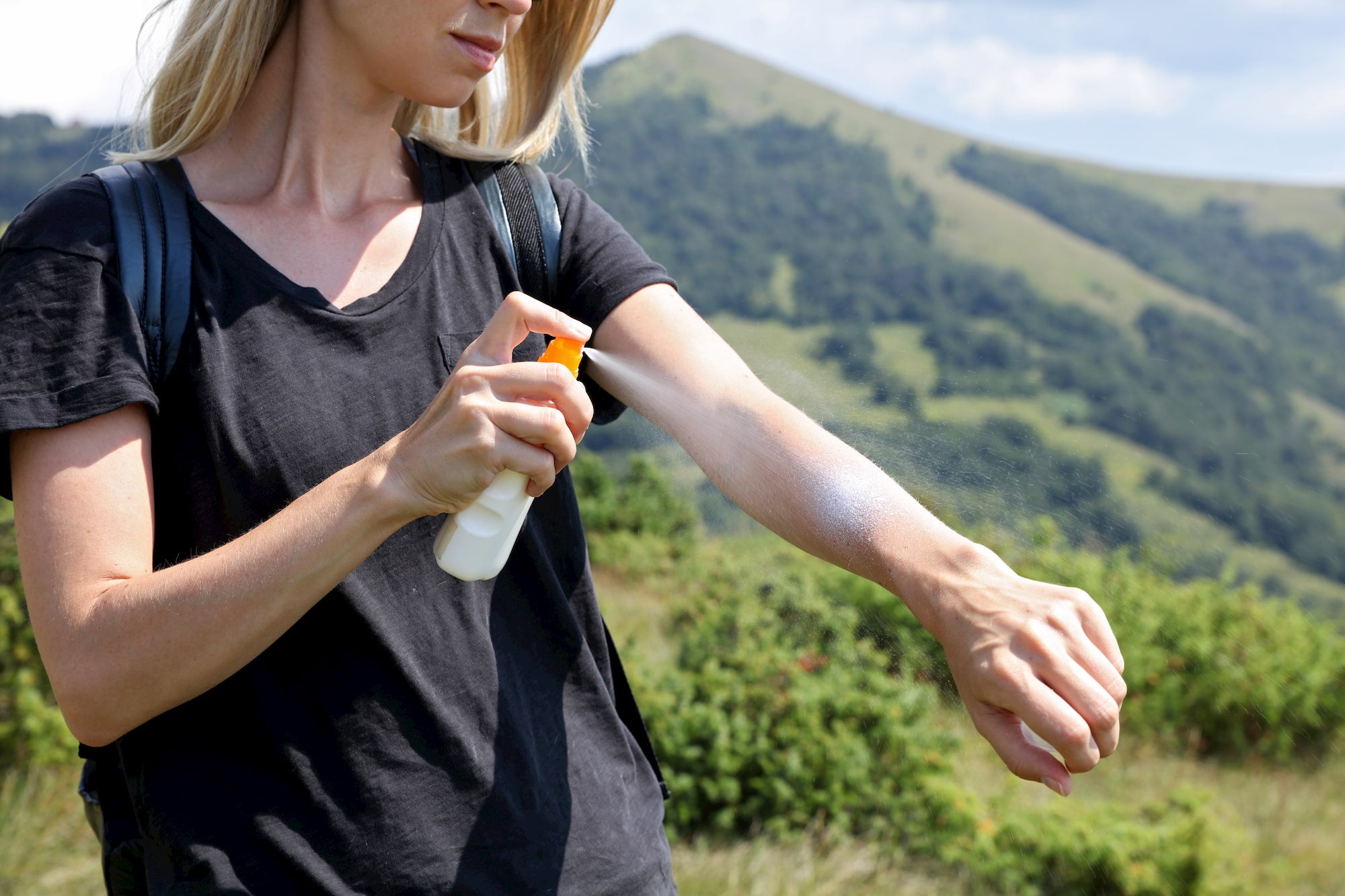 This article about oxybenzone is brought to you by Stream2Sea, whose reef safe sunscreen is made without harmful chemicals like oxybenzone and octinoxate while still providing full protection from the sun.

Consumers reading—and actually understanding—the nutritional information on the back of food, makeup, and health products has become commonplace. And fortunately, several unhealthy ingredients and additives have been regularly phased out in the last few years because of our concerns. Between aspartame-free diet sodas and a push toward natural, plant-based makeup products, there are a plethora of examples across a wide variety of industries that are going after ingredients that are now viewed as harmful or otherwise unhealthy.

But what about sunscreen?

If you’ve ever looked at the back of your sunscreen bottle (yes, even the all-natural ones), you probably noticed a number of ingredients you’ve never heard of or can’t pronounce: mexoryl SX, octinoxate, titanium dioxide, and many more.

Whether or not you’re an ingredient junkie, knowing what you’re slathering on your skin on the beach or a hike is paramount, as it affects not only your body but the wilderness around you. It may not surprise you to find out that nearly every major ingredient commonly found in sunscreen can be toxic in some form or another — whether it’s to you, the coral reefs, or the animals you swim with. Of these ingredients, oxybenzone is one of the worst offenders.

Here’s What To Know About Oxybenzone 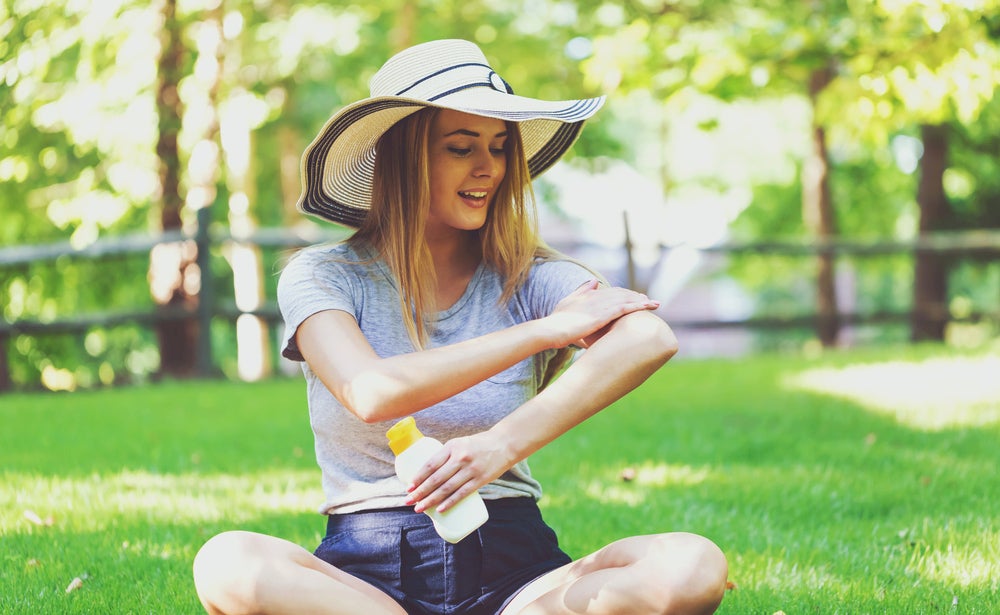 Ready for a science lesson? Oxybenzone is an extremely effective ingredient in sunscreen because it reduces UV (ultra-violet) exposure‚—that just means it protects your skin against the bright thing in the sky. Officially a part of the benzophenone family, oxybenzone is made to absorb light, and is used in sunscreens mostly because it absorbs UV rays at a much lower temperature than some of its chemical cousins. However, along with being a UV absorber (we’ll talk about the perils of absorption later), oxybenzone is also a designated endocrine disruptor.

A Brief Overview of The Endocrine System

Let’s pause on the ingredient talk and do a quick overview of your endocrine system.

Officially, your endocrine system is the system that produces hormones, regulates your metabolism, and basically promotes your entire body’s function, whether it be reproduction, sleep, your mood, growth, or tissue function. It includes all the glands in your body, including your thyroid gland, and has a huge impact on your stress levels, your ability to reproduce, and how quickly your body metabolizes critical substances.

On a personal level, it’s important to be aware of what oxybenzone can do to your body. Based on the phrase “endocrine disruptor” it’s probably not difficult to infer that oxybenzone has the capacity to interfere with the body’s endocrine system, and, by doing so, cause a slew of health-related issues. Along with decreased energy, oxybenzone has been linked to a variety of hormonal issues in both children and adults, including low sperm count in men, an excess of estrogen, and, in rare cases, infertility.

In addition to that, oxybenzone is a UV absorber, meaning it actually allows your skin to soak in the sun rays, thus creating a tan or freckling common in individuals with a lighter skin tone. Since sunlight is being absorbed into your second layer of skin, by using products with oxybenzone you’re more likely to develop an allergy to topical sunscreens. It also allows to chemical to circulate freely throughout your body, possibly linking it to a number of other health issues. As the Center for Disease Control reported in 2008, over 97% of Americans at the time were contaminated with oxybenzone, meaning the chemical could be actively throughout the bloodstream.

In a recent study published in February of 2018, researchers also suggested that “oxybenzone has been reported to produce contact and photocontact allergy reactions,” a cycle which may be reinforced “by the closed loop of ingesting fish contaminated with oxybenzone and/or washing the ingredient off our bodies and having it return in drinking water.”

Oxybenzone and the Environment 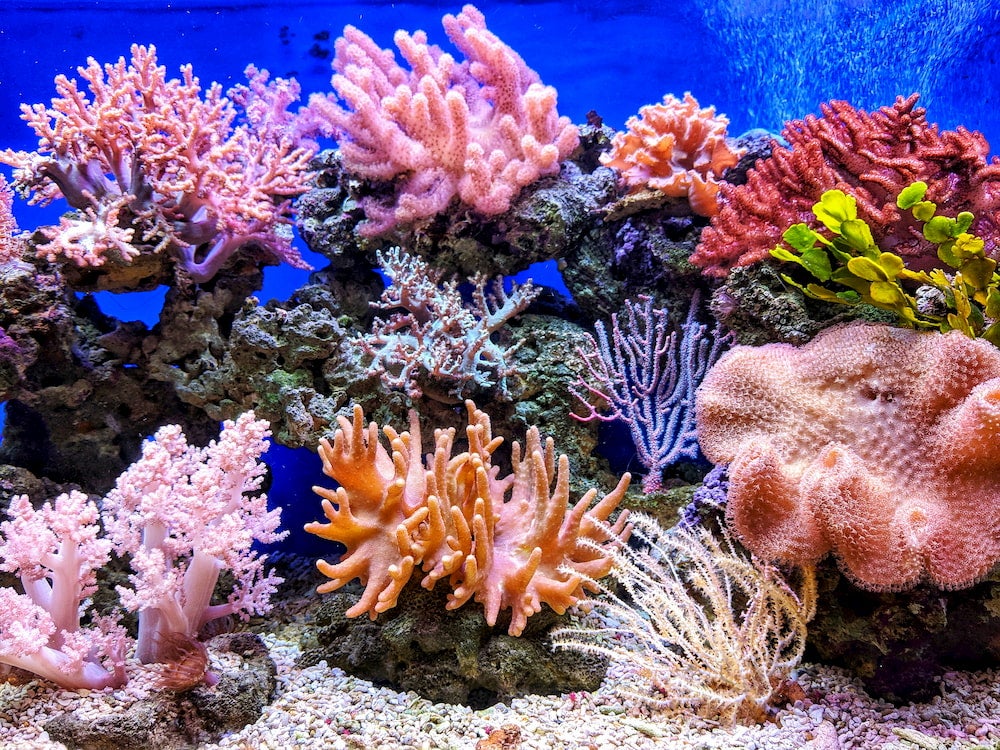 Aside from the hazards oxybenzone presents to humans, the chemical poses an extreme amount of environmental risk as well. In studies from 2015 and 2018, researchers found that oxybenzone, already found in high quantities along most major beaches and coastlines in the world, has been linked to coral bleaching and disruption of the reproduction system, meaning that it leaves younger corals without the ability to properly grow into adulthood.

The effect of such widespread use has been a decimation of once-flourishing coral regions, including populated waters off the coast of Hawaii and the Virgin Islands.

While some have argued that coral die-offs are mostly due to climate change, scientists have argued oxybenzone has a larger effect than most corporations would care to admit. Research has shown that even a drop of oxybenzone in a sample size of almost seven Olympic-size swimming pools has the ability to disrupt the vital and fragile ecosystem found off most coastlines.

Some scientists have verified this claim, noting that major coastlines with higher beach traffic and swimmers experience much faster decay than areas with fewer visitors, further solidifying the link between sunscreens with UV absorbers like oxybenzone and reef decay.

What To Look Out For Besides Oxybenzone 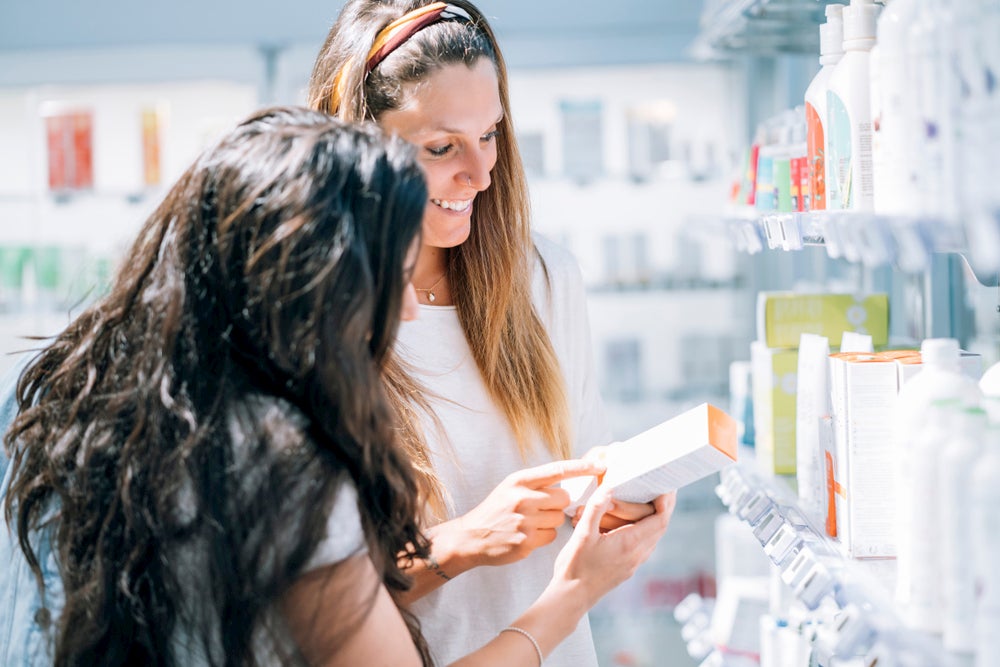 Along with ever-increasing levels of toxicity to coral reefs, oxybenzone and other common sunscreen chemicals like octinoxate, avobenzone, and nano particles are said to pose extreme risks to other aquatic organisms like fish and other species of marine wildlife.

As a result, Stream2Sea’s leading biochemist partnered with several other leading groups of environmentally-minded researchers to dive into this issue. They identified a slew of ingredients that, though approved through the FDA and other organically certified brands, actually pose an active threat to humans and aquatic life.

Despite the best intentions of organic sunscreen and hair and skin care products, these ingredients continue to pop up in products all around the world, and continued use threatens to damage both the rivers and oceans already so depleted by climate change and other human-caused factors.

As campers, hikers, and outdoors lovers, the best way to help is to participate in the movement toward healthier products. While it’s likely almost impossible to eliminate every one of the above chemicals in one fell swoop, starting a “product purge” is one of the easiest ways to begin thinking more critically about what you’re putting on your skin and in your hair. Stream2Sea’s truly coral safe and biodegradable products are available online, and each one is guaranteed to be safe for both your body and the reefs and oceans we care so much about.

Even if you don’t live by a coastline, the waters from your showers, baths, and river tubing adventures have just as much of an effect on the health of the environment. And depending on where you live, some of those waters might reach the ocean anyways.

Several beaches and tropical islands around the world are also beginning to ban oxybenzone and other chemicals from their waters by halting the sale of products containing those chemicals. In February of this year, the city of Key West banned sunscreens containing oxybenzone and octinoxate, two of the most damaging chemicals when it comes to aquatic life. The ban came after a new study revealed that over half of Key West’s coral reef had been decimated since 1985, with coral bleaching being a main proponent of the depletion. Key West’s ban followed Hawaii’s state-wide ban on oxybenzone and octinoxate, the first state to do so — and hopefully not the last!

Understanding the potential hazards of the products you’re using, including oxybenzone, is imperative to preserving both your personal health and the health of the oceans and all aquatic life.

Looking for more information on oxybenzone and other related oxybenzone-free products? Check out Stream2Sea’s website, which is chock-full of stories and scientific research that outline the concerns of current products and the hope in using safer, healthy alternatives.

This article was brought to you by Stream2Sea 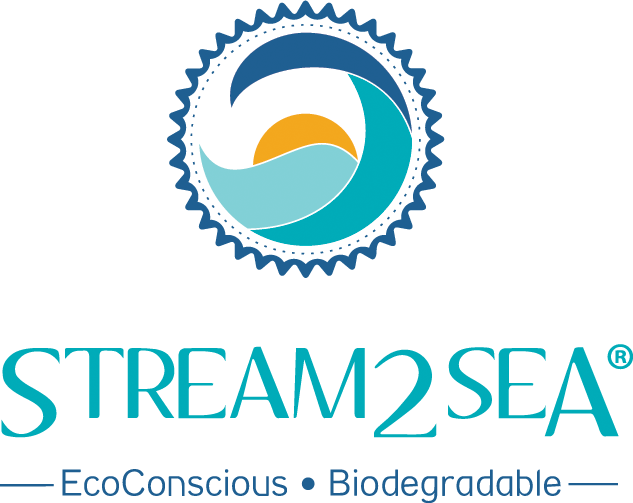 Pick up a tube of chemical free sunscreen for your next outdoor adventure! 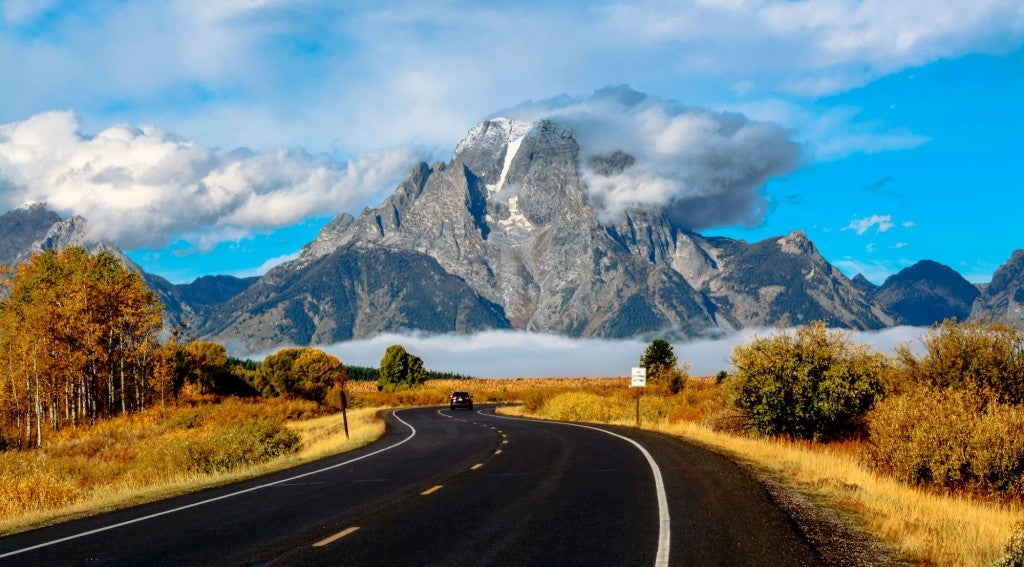 Your Outdoor Travel Guide to the Grand Teton National Park

This article was brought to you by GCI Outdoor, the makers of the best outdoor rocking chair to enjoy lounging while at the campsite or… 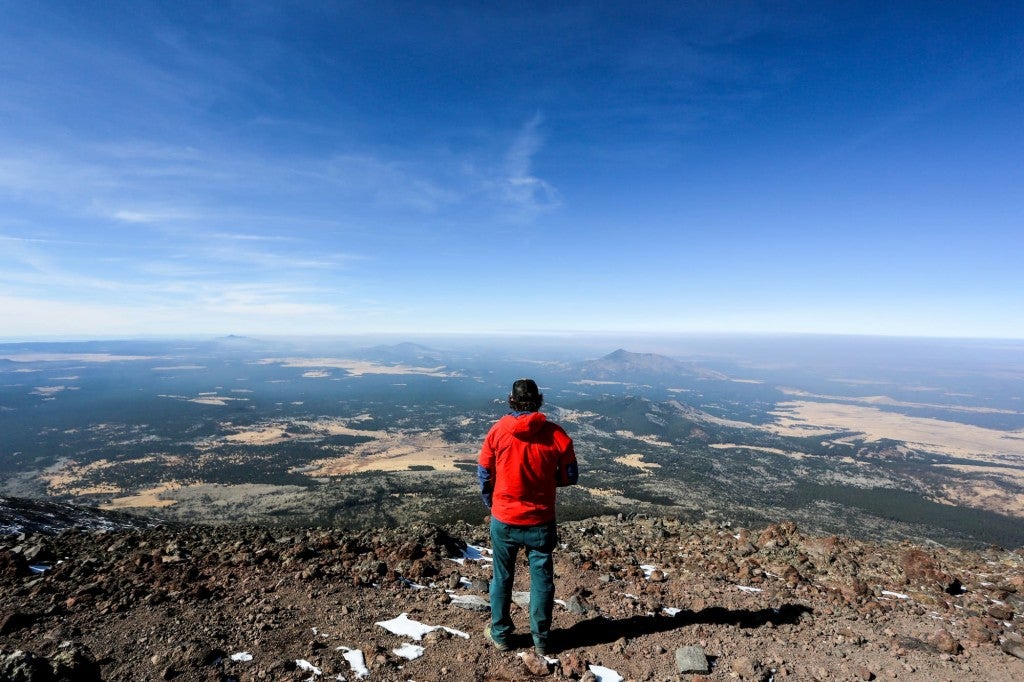 Why Hiking Humphreys Peak is the Perfect Outdoors Getaway near Flagstaff, Arizona

This article about Humphreys Peak was brought to you by AfterShokz, the designers of cordless headphones that make it easy and enjoyable to listen to…