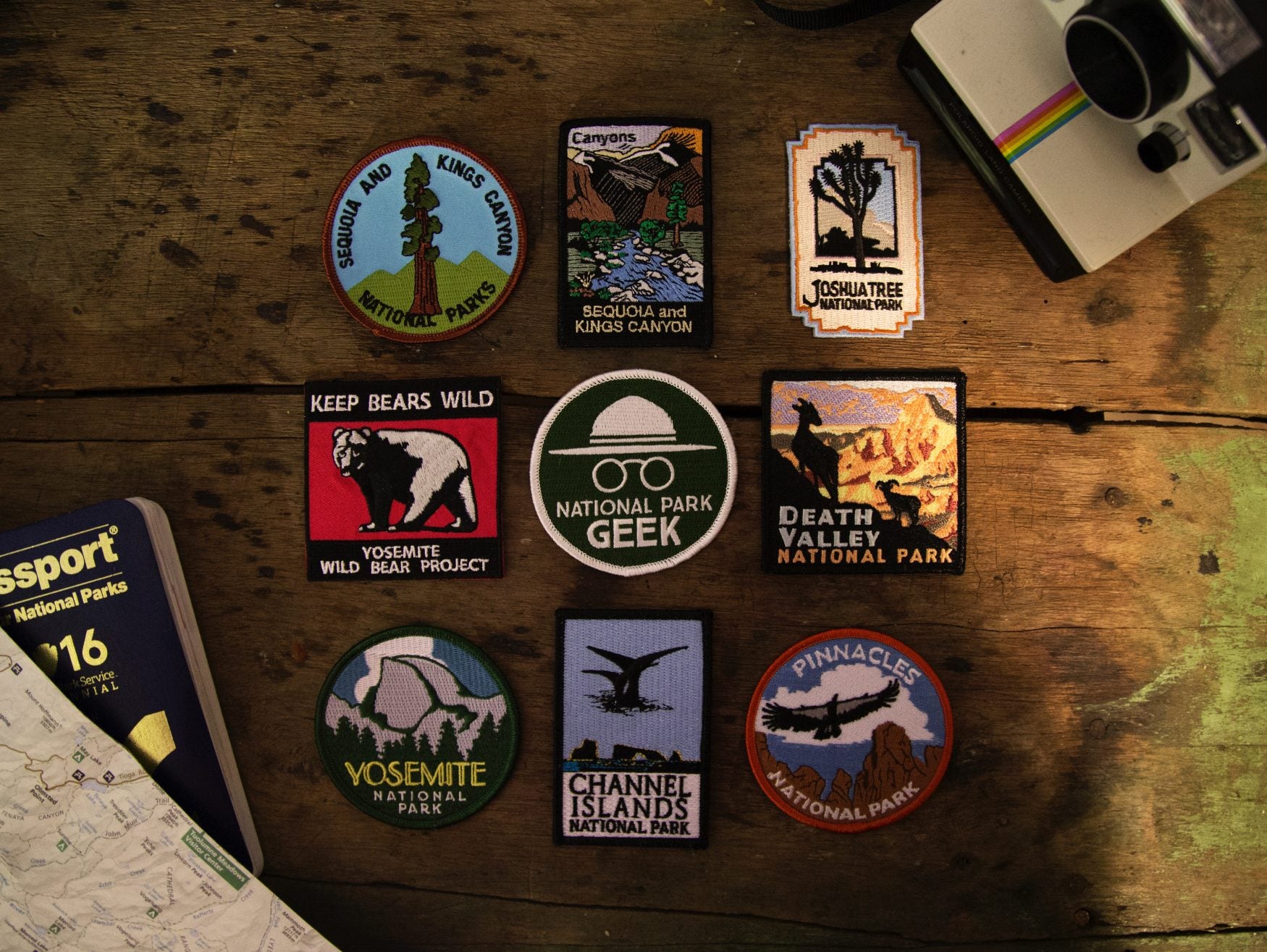 This article on national park patches was brought to you by our friends at Ethnotek. They make travel daypacks, everyday backpacks, and travel accessories that celebrate the unique cultural heritage and textile traditions of communities all over the globe. Ethnotek believes that the gear you carry does more than hold your stuff— it tells a story, and serves as a reminder of all the places you’ve been and still have yet to go.

One of the fun parts of visiting a new national park, besides all the hiking, magical scenery, and incredible memories, is the chance to collect another embroidered patch for your backpack, jacket, or keepsake box. For almost 125 years, national park patches have been more than just a souvenir or bragging rights for national park fans and avid travelers. This fun tradition actually has everything to do with the history behind the National Parks Service, and the way the NPS’s origins are intertwined with both the military and the arts.

In 1872, the U.S. government sent a party of surveyors to Wyoming, in part to scout a potential route for the Northern Pacific Railroad. The landscape of the American West might be much different today had a pair of artists not joined the expedition—one Thomas Moran, a painter, and William Henry Jackson, a photographer.

The landscape photographs and artwork they sent back to Washington helped lawmakers see, in an era before mass media and easy travel, just what a special place Yellowstone is. Their work directly influenced Ulysses S. Grant’s decision to sign the Yellowstone National Park Protection Act just a year later, rather than opening the lands up to development.

Not everyone was pleased with the President’s decision. It was one of the first instances in almost a hundred years of U.S. history that public lands were reserved for their own protection, an idea that was still at odds with how people viewed and related to natural resources.

While the Forest Service has historically focused on “productivity,” meaning managed use of natural resources by railroads, timber barons, hunters, ranchers, and settlers — alongside maintaining the health and diversity of the land — the creation of national parks ushered in a shift in perspective. National parks could be used for recreation and enjoyment for the people. They would become booming destinations for leisure activity.

The national parks photography and paintings produced by Moran and Jackson found new purpose as marketing materials and charmed Edwardian tourists the same way they’d won over Congress just a few years before. Their work introduced thousands of Americans to the previously unseen rock formations, geysers, and colors of Yellowstone.

To manage the growing crowds of visitors, and help keep poachers and vandals at bay, Yellowstone was first staffed by the military. From 1883 until the 1890s, U.S. troops were stationed in national parks to shoo away anyone who was misusing the land, illegally hunting bison and elk or carving their names into the rock faces.

After a couple decades, however, it was clear that Yellowstone would need its own dedicated staff. Enter, the Yellowstone Park Scouts.

To differentiate Scouts from actual military and law enforcement special silver and gold badges were developed as new lands were preserved, each design unique to its park.  When the National Parks service officially formed in 1917, all rangers under the Department of the Interior briefly wore the same badge across the board, whether they were NPS or Forest Service. By the mid 1920s, however, those had been phased out. Over the next several decades, different metal badge styles came in and out of use as the National Park Service expanded and the ranger roles diversified.

One such new role for rangers that emerged in the 1930s was that of U.S. Park Service Life Guards, who wore cloth badges rather than metal. These were some of the first examples of the kind of national park patches collectors know and love today.

Later, other official embroidered badges were introduced so Rangers could be easily identified even if they were wearing outerwear that wasn’t compatible with a metal badge. Sometimes contests were held inviting artists to submit possible designs for new national park patches and badges, like the 1949 contest that produced an arrow-head shaped patch with a bison on it, which later evolved into the official National Parks Service logo.

Meanwhile, tourism traffic to National Parks had grown rapidly, especially with the advent of the automobile. Merchandising tie-ins quickly developed at Yellowstone and other new national parks like Mackinac National Park and Rock Creek Park. Plenty of artists and designers have followed in Moran and Jackson’s footsteps over the last century, finding creative inspiration in the colors and contours of our national parks.

Some of the early souvenirs were hefty heirloom-quality items, like china dishes from Petrified Forest National Park, commemorative metal camping cups, or the Glacier National Park blanket which Pendelton famously introduced in 1916.

Many more, though, though were small, cheap, and simple. Postcards and stamps depicting national parks were hugely popular, as were special postmarks that were as much about advertising as proof a person was sending word from a remote and exotic location, encouraging the recipient to, “Visit Glacier National Park.” Posters were popular, too, from the designs produced by the WPA during the Great Depression to Charley Harper’s iconic 1980s National Park posters.

Patches were popular from the beginning, modeled on those worn by park rangers and the military, and only grew more popular after World War II. Troops sometimes sent home embroidered patches from where they were stationed overseas, increasing the domestic demand for similar souvenirs. That trend continued with the rise of backpacking as a form of affordable travel and the popularity of patches with both tourists and members of counterculture alike.

Patches were easy to mail to friends, affix to everyday backpacks or denim jackets, and transfer from garment to travel daypack and back again as a keepsake and travel record.

The NPS has continued to design national park patches that celebrated their most stunning peaks, spires, hoodoos, waterfalls, and lakes. Eventually, the concept was taken further with Junior Ranger patches, patches celebrating the completion of various thru-hikes, as well as commemorative patches celebrating milestones for conservation organizations like the Washington Trails Association. New patch designs continue to be released, while vintage national park patches have become beloved collectors’ items and conversation pieces.

Next time you’re at a national park, whether it’s an old favorite or one you’re seeing for the very first time, don’t rush through the gift shop. Check out the national park patches, posters, and other souvenirs and appreciate the long history of how art and advertising have not just funded national parks, but are part of the reason we have them in the first place.

If you are hooked on camping in National Parks and would like to find your perfect park, get tips from people who have camped there, and learn more about the history of these wonderful, wild places, by checking out our Ever-Expanding Guide. It’s updated regularly with all the latest information.

You can win free gear from Ethnotek and 19 other outdoor brands by reviewing campgrounds on The Dyrt. Share past camping experiences, photos, and videos to earn points towards monthly prizes in The 2018 Great Camping Giveaway! 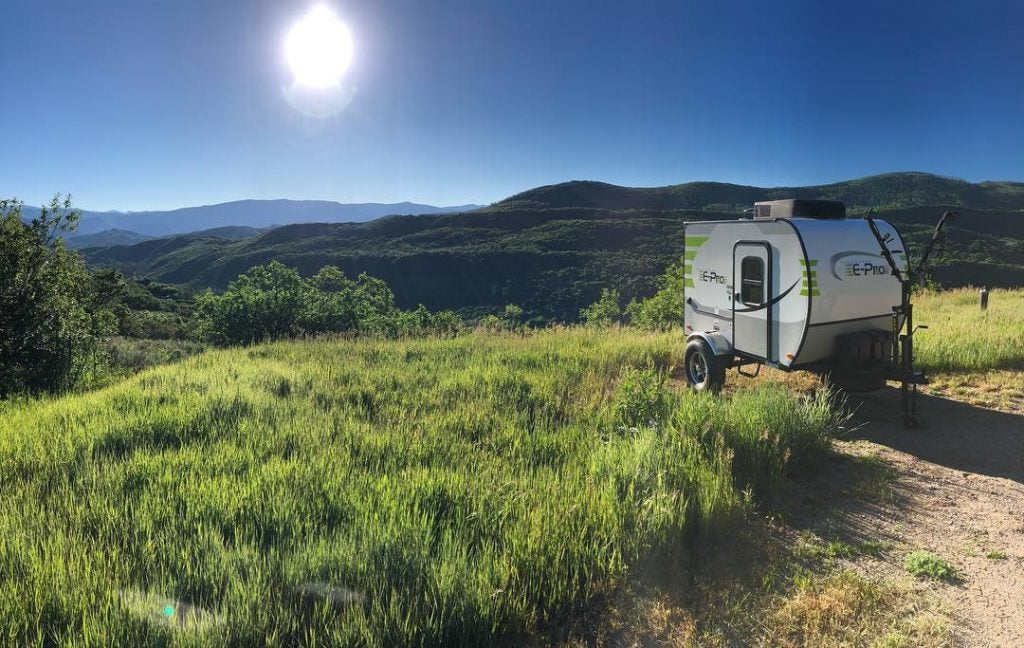 These New Rentable Micro-Trailers Are Coming to LA and Chicago

It’s easy to fantasize about dropping everything and heading out to the woods. However, the time needed to gather your camping gear and formulate a… 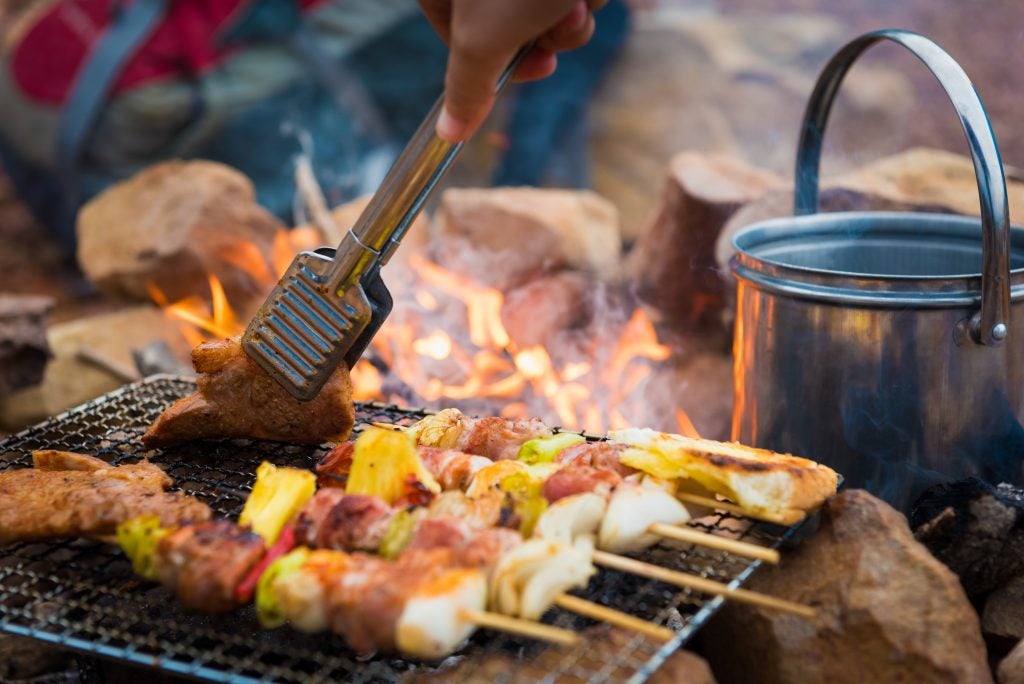 This tip guide is brought to you by our friends at humangear. Organization is the key to camp cooking success, and humangear has you covered….