9 Camping Games for Adults to Save for Sundown 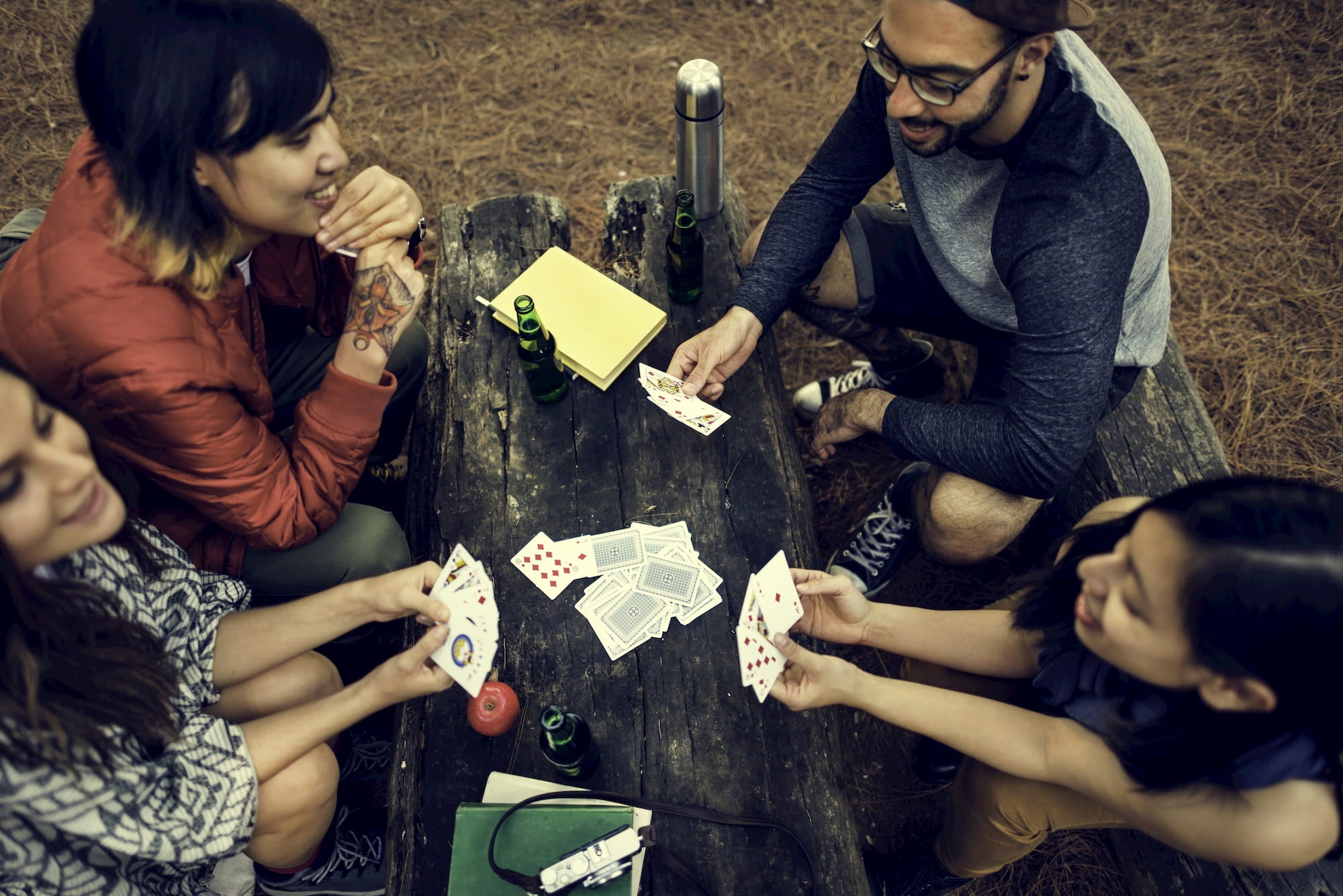 We know there are plenty of camping games for kids, but what about fun camping games for adults? Whether you’re camping with a friend or a group of friends, these traditional (and not-so-traditional!) games will break up your camping routine in the best way possible. 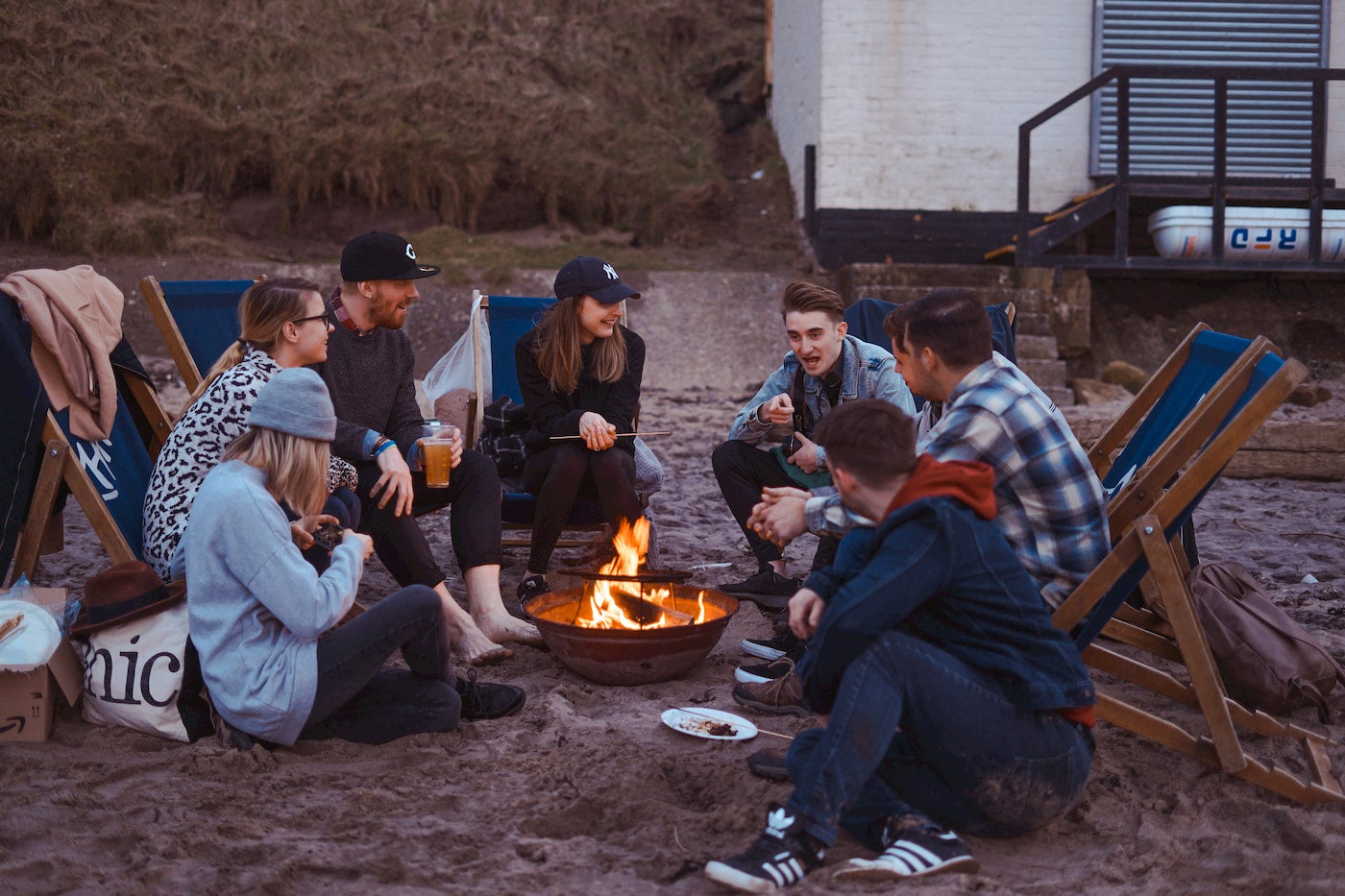 These nine camping games for adults will help you and your friends have a bigger blast on your next camping trip.

Players: Two or more
I’m putting this one on here because, after a recent trip with my two best friends, my love of Truth or Dare has been re-ignited. We’re in our 30s, and this proved to be the game that brought back childhood fun.

You’ll need at least two players and your imagination. Players are given the choice between a truth or a dare, where you either have to answer a question or complete a dare. Pro tip: It’s better if you make the rule that, no matter what, players must answer honestly and they must always complete the dare.

Players: Three or more, but better with large groups
Another childhood favorite, Kick the Can is the ultimate game for large groups of friends. To play, you’ll need a large space and an object (the can) in the middle. One person will be “It”, and the rest will run and hide. If one player is tagged by the player who is it, they’ll be captured and designated to an area. Other players try to kick the can, resulting in the freedom of the captured players. In order for the person who is it to win, he or she must tag all of the other players before the can is kicked.

Players: Two teams (best with large groups)
This classic schoolyard game is another favorite campground game for large, open spaces. You’ll need two teams and a flag for each, as well as cones that mark a border separating team sides. The objective of the game is for players to capture the opposing team’s flag and return to their own territory without being tagged. 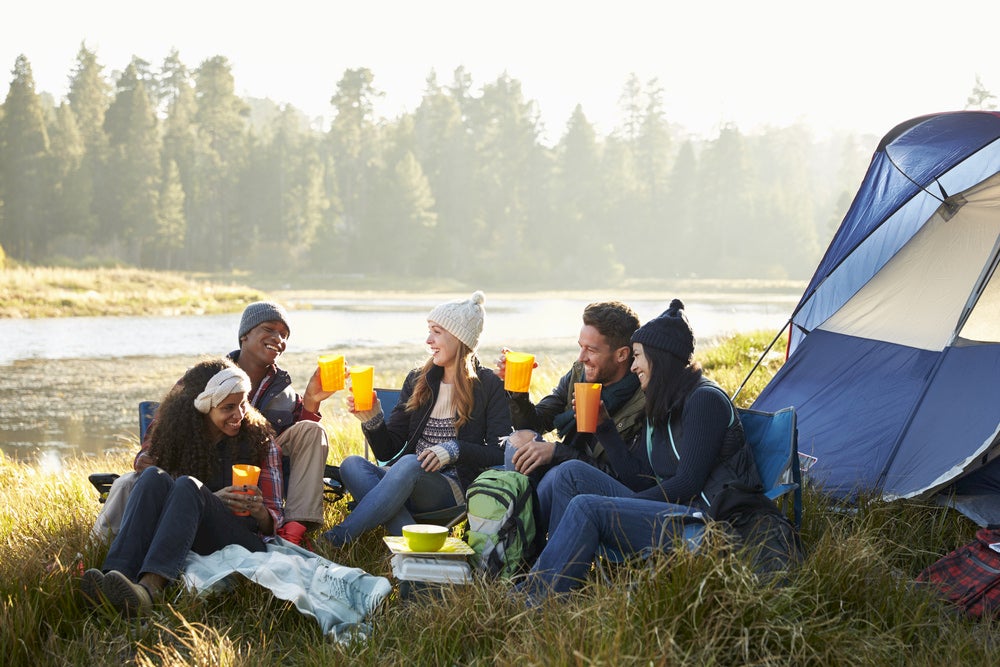 Players: Two, or two teams of two people
Unless you’ve been under a rock, you’ve likely played (or at least heard of) beer pong. But what about floating beer pong? With this fun game (you can find them on Amazon for less than $35) you get all the fun of beer pong, but you’re in the water chilling out.
All of the same rules for beer pong remain, but cups are placed in a floating platform; the only skill required is the ability to sink a ping-pong ball in a floating cup. (Good luck. It’s harder than you think!)

Players: The more the merrier!
Price: $7.19
Whoever turned Jenga into Drunk Jenga is a genius. Seriously. All you need is a Jenga set (jumbo or regular) and a permanent marker to create one of the most fun drinking games out there. On each block, write an action. For example: Only use left hand to pull blocks. Players must complete the action that the Jenga block states. Knock over the tower? Finish your drink.

Players: At least five, but the more players, the better
Price: $18.00
Containing 250 prompts on who is the “most likely person to…,” this game gets real, real fast. This game is a good one for those who love Cards Against Humanity (another fun option!), as some of the prompts can be a bit outrageous and perhaps a little offensive. The person who ends up being “the most likely person” must take a drink.

Cards and Board Games 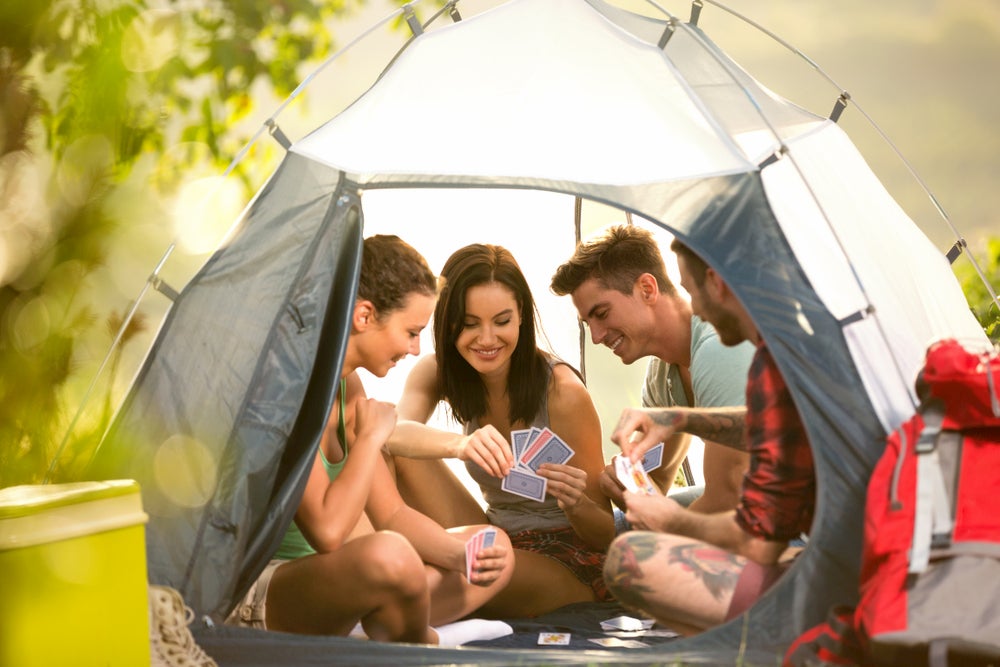 What do you Meme?

Players: As few as three, but as many as 20
Price: $29.99
Similar to Cards Against Humanity and Drunk Stoned or Stupid, What do you Meme? is a card game that has players trying to create the best meme for a corresponding photo card. The winner of each round is decided by a rotating judge.

Players: Two or more
Price: $24.95
The tagline to this game? “Extremely uncomfortable & hilarious game for adults.” Spotlight is another card game with 110 different prompts that often result in cringe-worthy responses. One question sample: “What’s a somewhat weird fetish that you would actually try?” Warning: Only play this with people you feel really comfortable with, unless you’re aiming to get very weird, very quickly — which could actually be a pretty fun way to get to know your camping neighbors.

When Tana isn't adventuring in the outdoors, she's writing about adventuring in the outdoors. Based out of the East Coast, Tana has traveled extensively throughout the US and abroad. Despite her travels, or perhaps because of them, she is in a constant state of wanderlust. She's excited to be a part of The Dyrt team, where she can marry her love of writing with her love of nature. 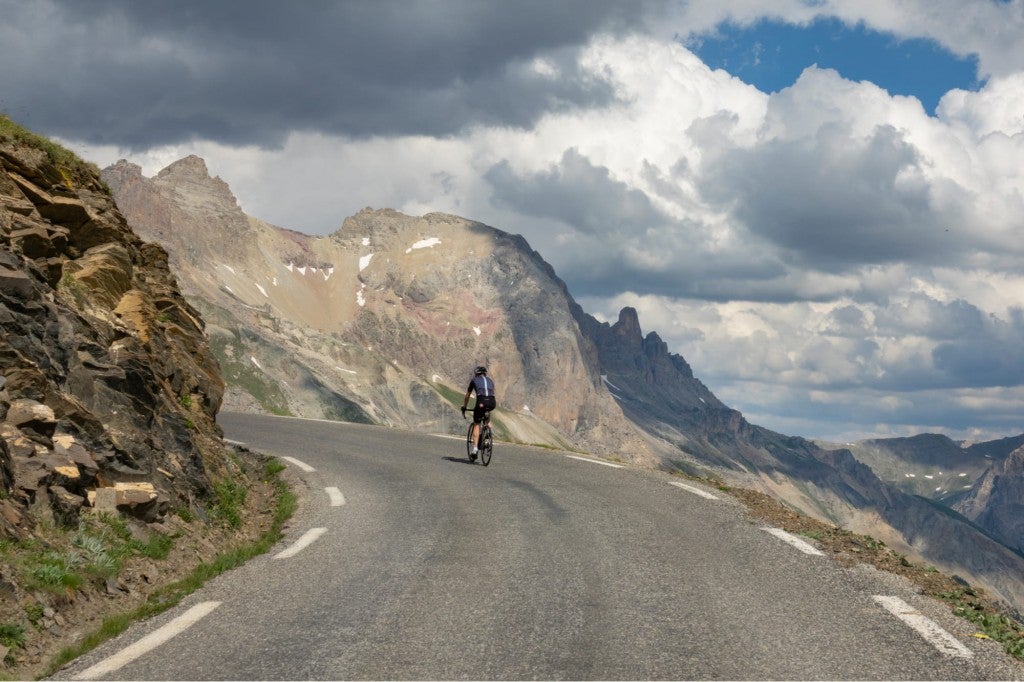 6 Cross Country Bike Routes That Will Change How You See the U.S.

Imagine seeing the country from coast to coast, without spending a dime on gas or rushing by the landscape. A cross-country bike trip requires serious… 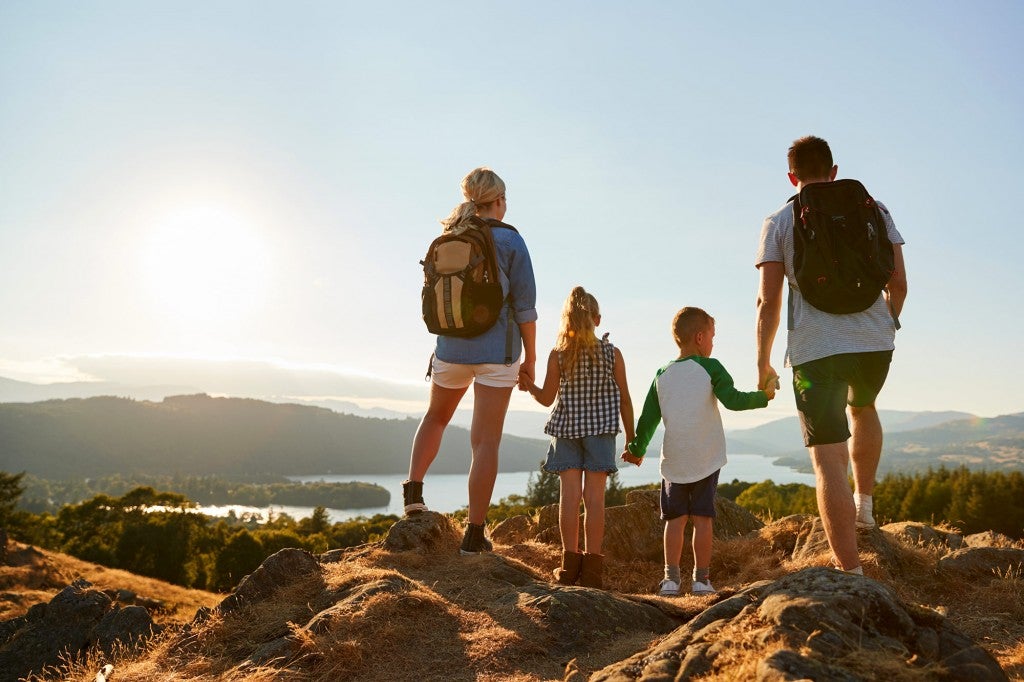 5 Reasons Camping May Lead to a Longer Life

There are five places in the world where people live longer than anywhere else—well into their 90s and 100s. Not only are they beating the…