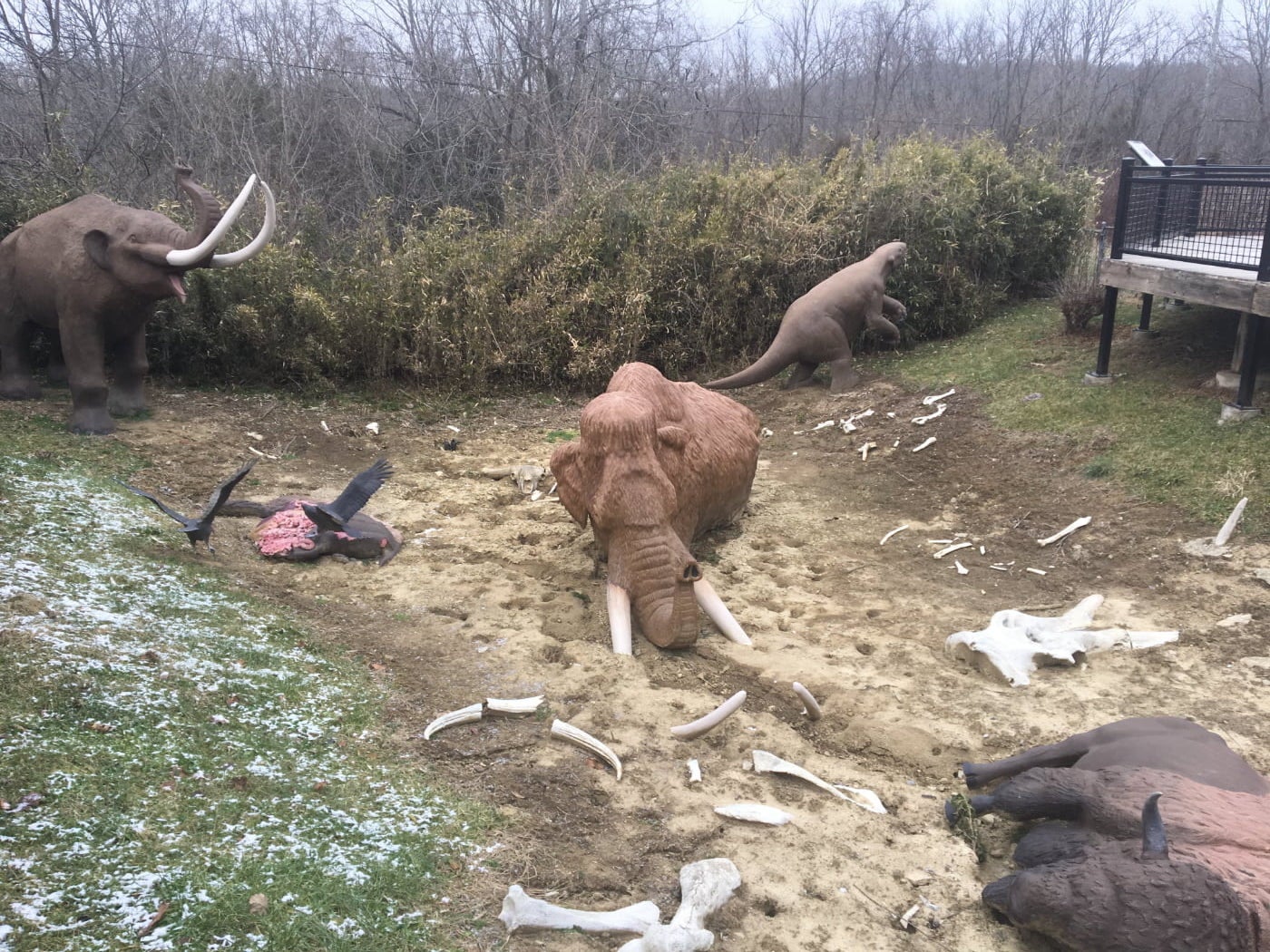 The complete guide to Bone Lick State Park is brought to you by Roanline, where you can snag a Cotopaxi fanny pack to carry along on your next fossil-hunting hike.

Big Bone Lick State Park is a little-known site with an expansive history. Located in Boone County, Kentucky, the park itself is a top-tier destination for those seeking an outdoor experience with a side of history. With thousands of fossils from over a dozen different prehistoric species (from mammoths to a giant ground sloth), Big Bone Lick offers an utterly unique look at some of the earliest fossils ever discovered in the continental United States.

Unlike larger, well-known fossil locations like the La Brea Tar Pits in California, Big Bone Lick State Park is a less-visited yet just as valuable fossil bed, and the only location known as the birthplace of modern American paleontology.

Although Big Bone Lick State Park is rich in its historical roots, that doesn’t mean there’s not something for the more adventurous visitors. Whether it’s hiking, orienteering, fishing, or fossil-hunting, Big Bone Lick’s wide selection of activities makes it a perfect place for a day trip or a weekend camping getaway. 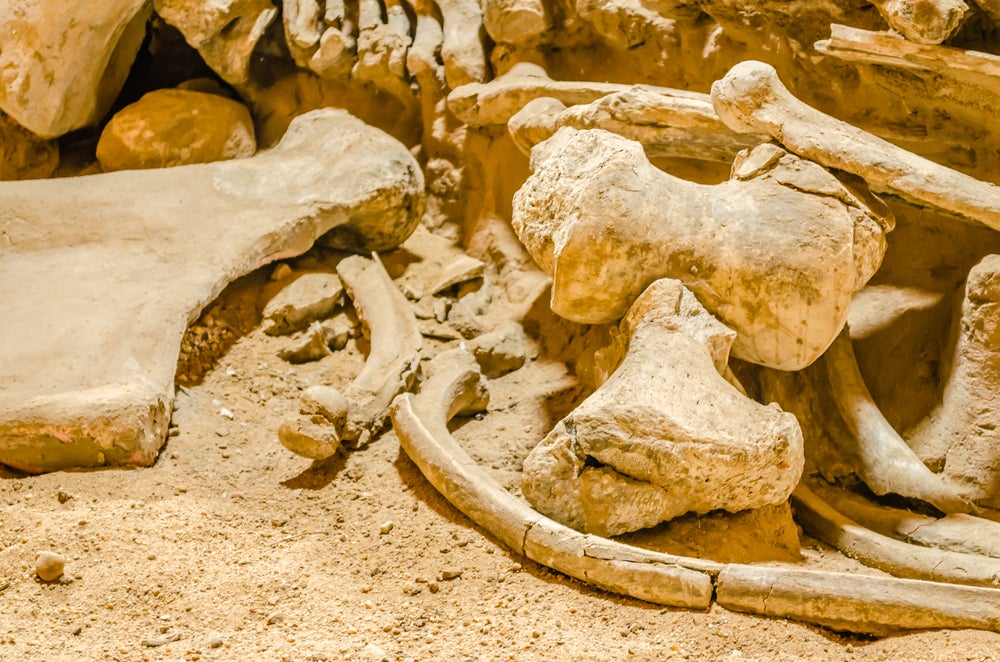 Big Bone Lick State Park is named after the Pleistocene megafauna (mammoths) fossils that were found in the area prior to its founding, and for the salt lick deposited around the original sulphur springs. It is theorized that the salt lick drew large numbers of mammoths to the area, along with several other kinds of animals, many of which are relatives of present day deer, bison, caribous, moose, elk, and horses. Paleontologists believe that a rare fossil found here is the remnants of a giant relative to the sloth.

So why the huge fossil deposit? There is some debate as to the largest source of the fossils, but most experts settle on one or two scenarios:

The first is that some of the earliest peoples discovered the area and began hunting the animals that frequented the swampy land. Once it was discovered (around 13,000 BCE), Big Bone Lick became the primary hunting ground for the next 8,000- 10,000 years. The obvious result of the prolific hunting was the thousands of bones discovered later.

The other theory offers a more “natural” perspective on the cause of the fossils. Some scientists suggest that the area around the hot springs was extremely soft, with enough mud and water to create a marsh-like environment that eventually trapped most of the species that visited the salt lick, creating vast numbers of fossils.

Despite the different theories, the overwhelming consensus is that Big Bone Lick provided the perfect environment for fossil preservation due to the coverage from flooding sediment, a vital component in maintaining such large fossils.

After the discovery of the fossils by Native Americans and later by immigrant settlers from the East Coast, the site garnered visits from explorers and entrepreneurs alike. Along with fossils, the region became known for its salt deposit, and was the site of a salt making operation from the late 1700s to around 1812.

In 1812, Big Bone Lick became a health resort. The minerals in the water at Big Bone Lick were said to have restorative qualities, and for almost 50 years, bathhouses lined the creek that wound through the area.

By the 1960s the bathhouses were gone and Big Bone Lick was accepted by the Park Board as a historical site. Subsequent purchases by the state of Kentucky grew the area to its current size of 813 acres.

Deemed the official “birthplace of American paleontology,” Big Bone Lick’s most obvious draw is the large collection of fossils to be found in and around the park. The visitor center onsite doubles as a museum, and features significant displays of fossils from the Big Bone Lick area, including mammal bones dating back to the Ice Age. In addition to the paleontological fascinations, the museum also contains a variety of Native American artifacts, and relics from the salt-making era of the site. 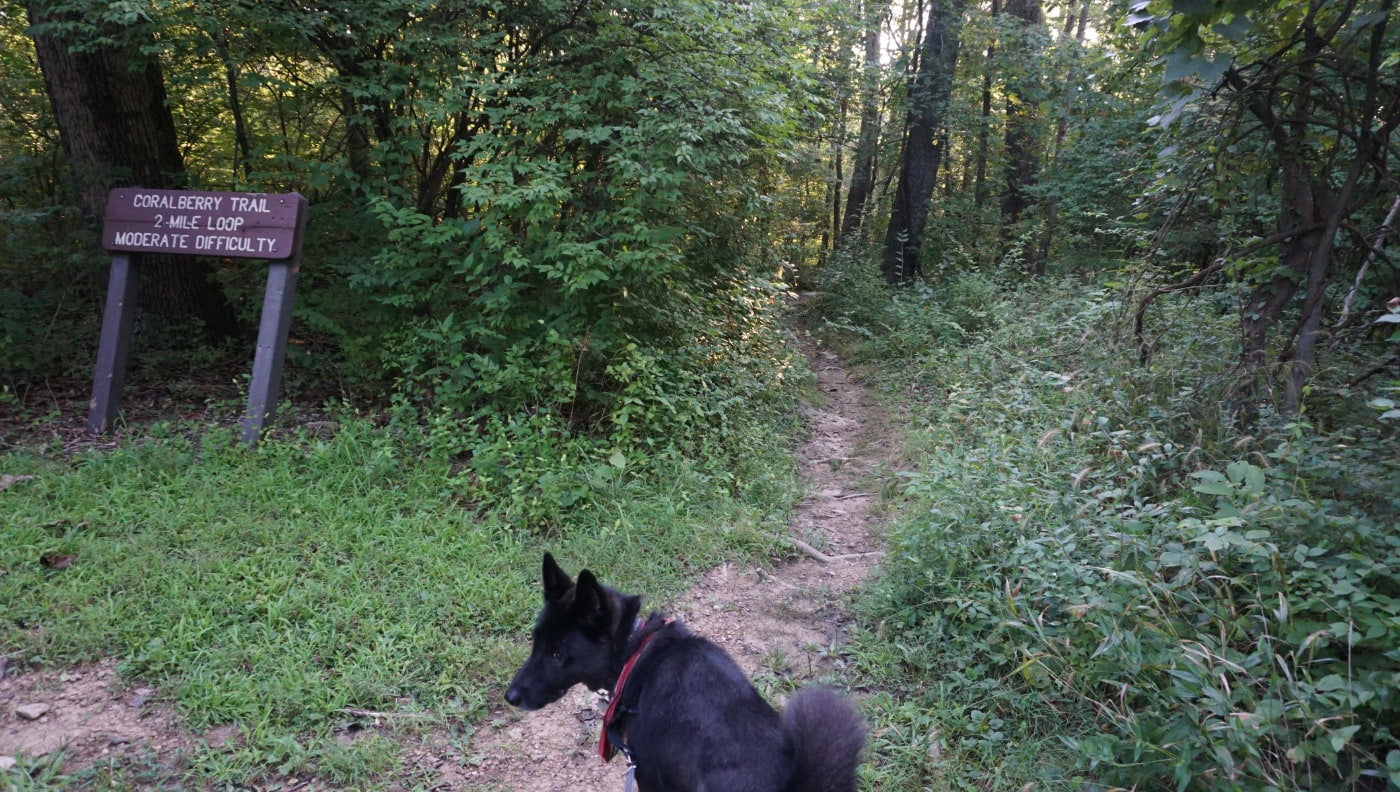 Image from The Dyrt camper Daniel B.

The most prominent trail in the park is The Discovery Trail, which begins just behind the visitor’s center, and provides a comprehensive look at the history of Big Bone Lick State Park, with interpretive panels and detailed, staged models that showcase the prehistoric era of the park.

The trail is considered family-friendly and highly accessible, so each member of the family should be able to enjoy the walk through Big Bone Lick’s extensive history.

Big on orienteering? Check out some adventure races, many of which feature extensive and competitive orienteering.

Though Big Bone Lick is a preserved historical site (making most off-trail activities forbidden) the nearby lake offers excellent fishing for interested visitors. When the lake is full, it’s home to largemouth bass, channel catfish, and bluegill.

Note: According to park staff, the lake is currently closed for dam inspection. See the Big Bone Lake website for updates as they work to reopen the lake to visitors. 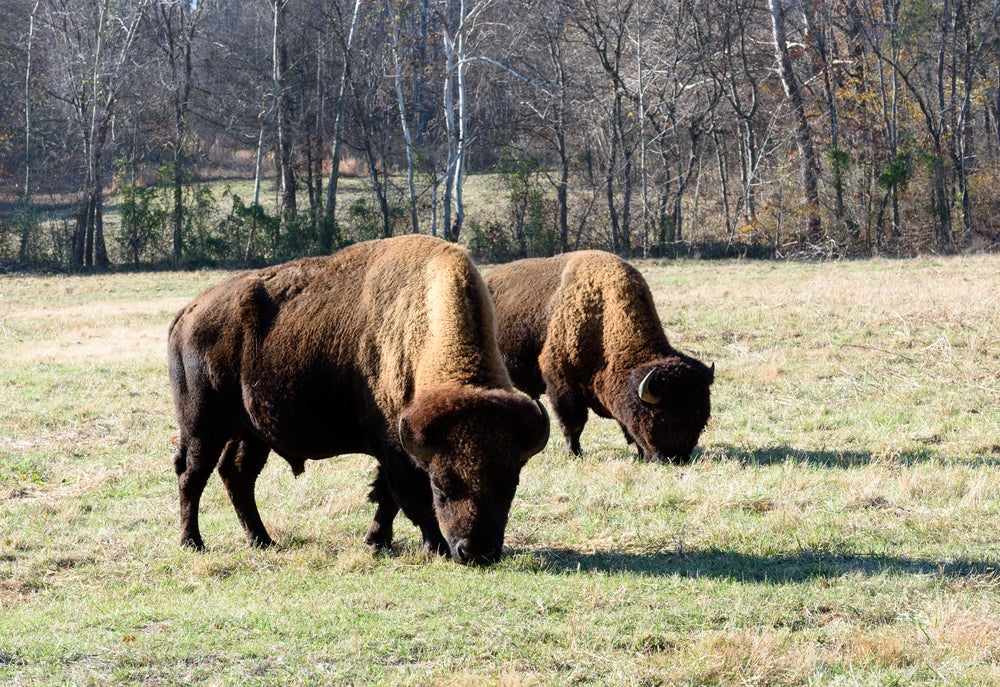 For avid animal watchers, Big Bone Lick provides visitors the chance to see living wildlife as well. The park plays host to a variety of birds throughout the year, including the Red-throated Hummingbird, a variety of hawks, and several species of owls.

Though the birds are active year-round, the winter provides the best viewing of multiple species, as over 50 different kinds of birds spend the cold season amongst the trees of Big Bone Lick. According to their website, Big Bone Creek Trail is the best place within the park to spot birds of all types.

For visitors interested in camping at Big Bone Lick, a campground with 62 full hookup sites are available to guests between mid-March and mid-November. The popular campground includes a swimming pool and playground, restrooms, laundry facilities, and showers.

The campground also features close access to viewing stations for the park’s small herd of Bison, which roam the surrounding open area.

Play a Round of Mini-Golf or Tennis

To sweeten the deal, tennis courts are also available on a seasonal basis to campground visitors.

Where you visit for the fossils, the salt, or the living animals within the park, make sure to fill us in on your prehistoric adventure at The Dyrt!

This article was brought to you by Roanline

Visit Roanline online or in-store in Asheville for the latest selection of parks project shirts. 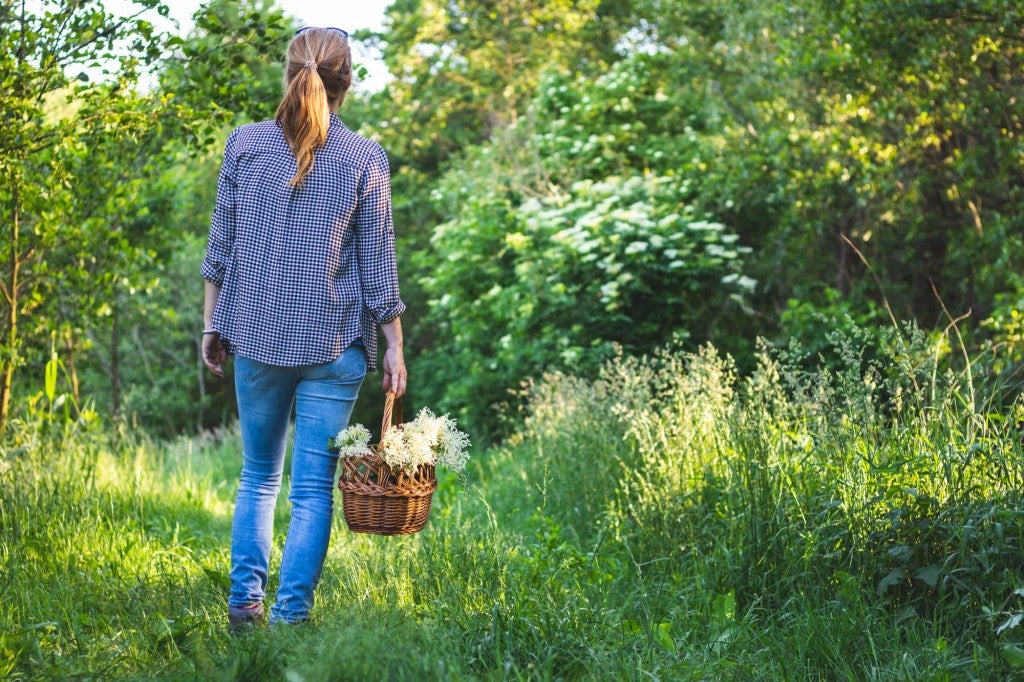 The Great Smoky Mountains are famous for the ancient, fog covered mountains looming over North Carolina and Tennessee. But if you look much closer in… 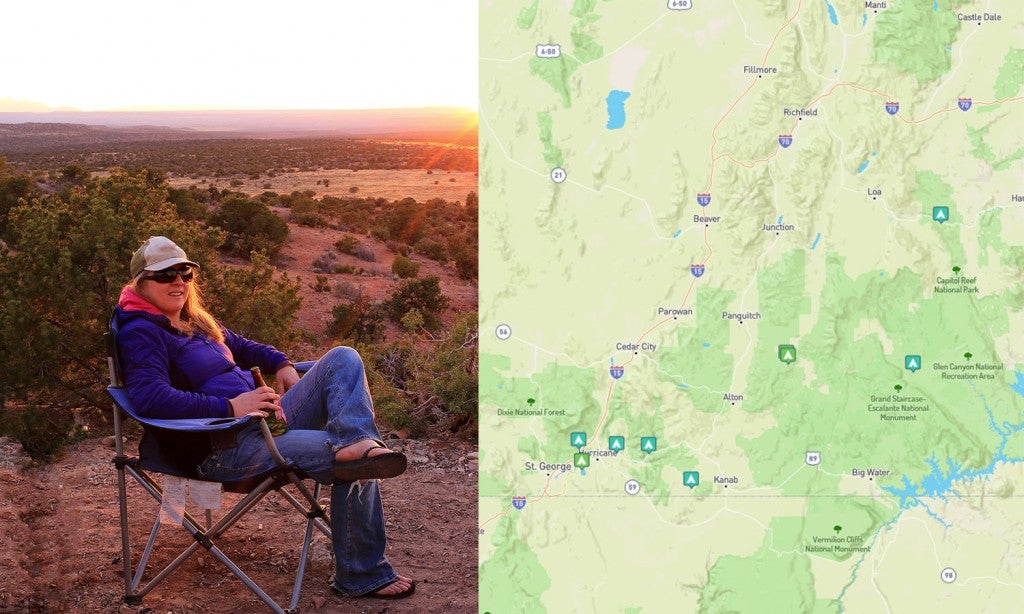 Where to Find Year-Round Camping in Southern Utah

Growing up in Central Oregon, my version of desert camping varied greatly from the desert seen when camping in southern Utah, the region I now…