What Happened When Four Teens From a Youth Shelter Tried Snowshoeing 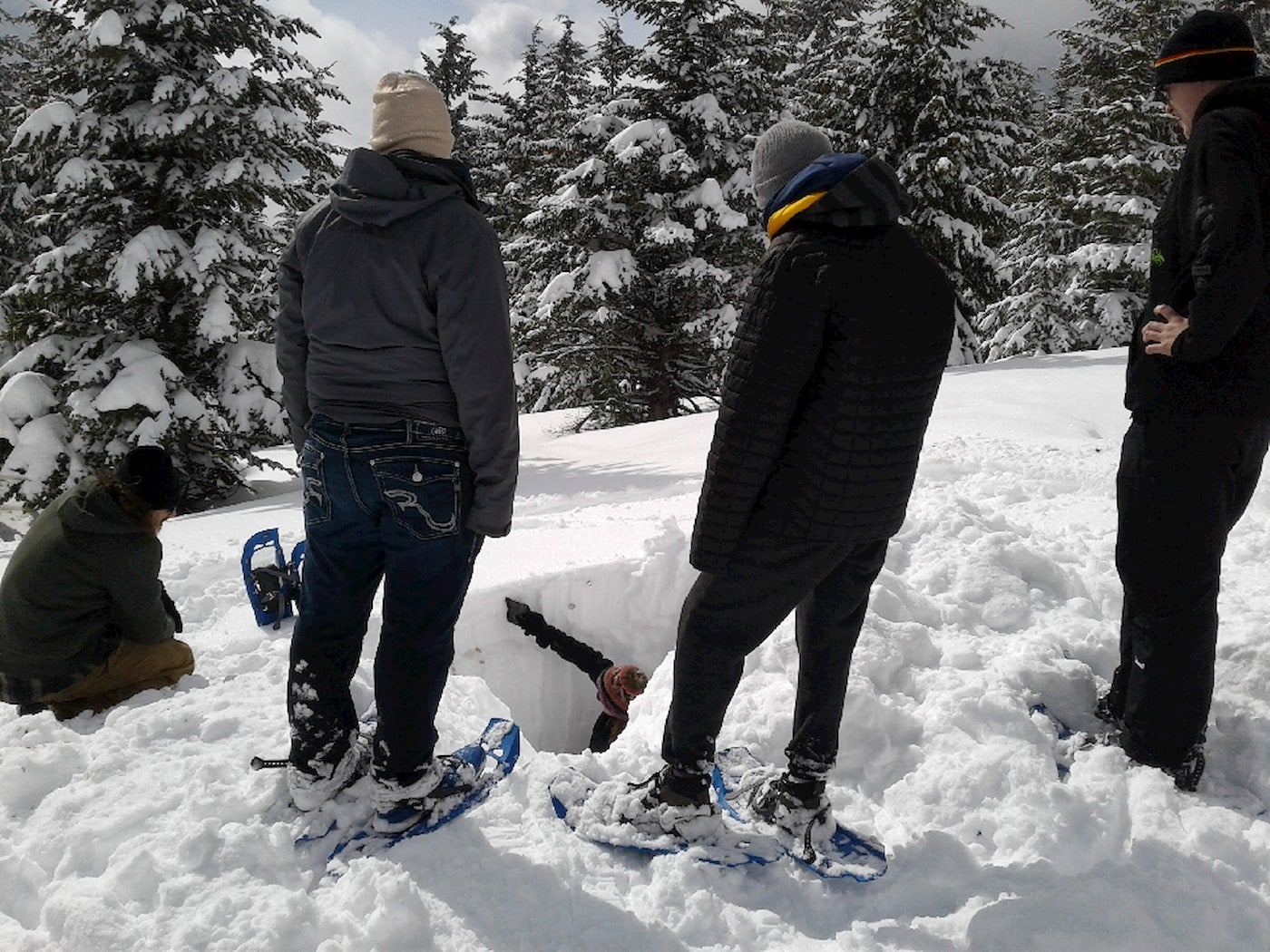 The first time I walked into Crosswalk Teen Shelter, there was an argument in full swing; angry teenagers stormed back and forth, yelling and cursing. I asked myself, “Oh, Linea, what are you getting yourself into?”

Crosswalk Teen Shelter is located in Spokane, Washington, and has been serving Eastern Washington’s homeless, runaway, and street-involved youth since 1985. In 1986, Ken Jernberg started a program at Crosswalk where students could earn their GED (high school equivalency degree) or High School Diploma, funded by Spokane Community College. He taught there for 30 years until he passed away from leukemia.

I am the third or fourth instructor since Ken’s passing, but I still constantly meet adults whose lives were changed as kids in Ken’s Crosswalk GED program.

Snowshoeing: A New Opportunity for At-Risk Youth in Washington 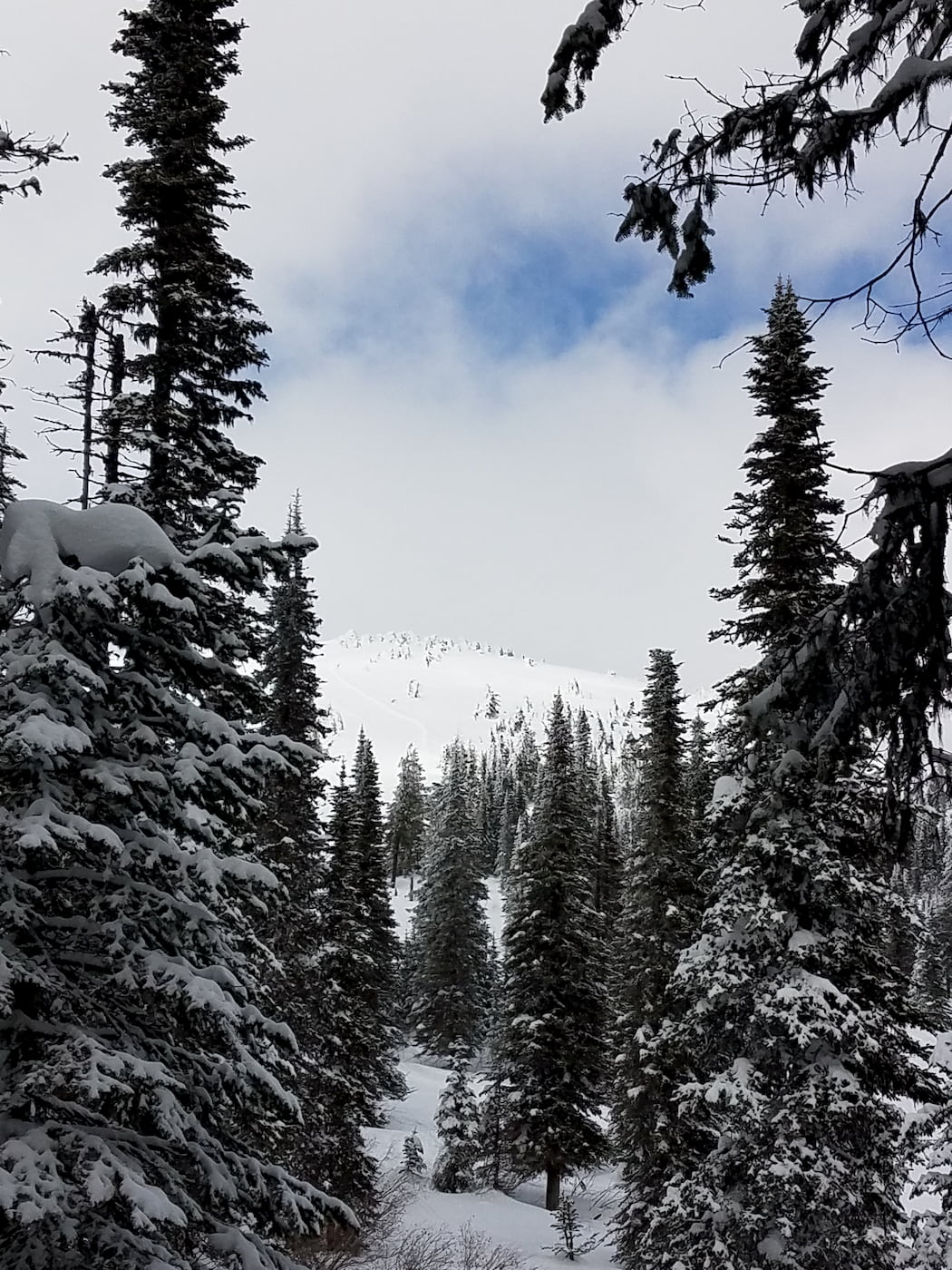 When I came to Crosswalk, I asked the staff about things that had been meaningful for students in the past. I heard one story about an outdoor educator from the Lands Council who had led a science-focused snowshoeing trip. Only one student had chosen to participate, but he loved the experienced.

My students at Crosswalk Teen Shelter have had to grow up fast. People they love and trust have hurt them. Others they’ve loved have died. They have an intimate understanding of what it’s like to hurt and need help, so they are also some of the most caring and generous people I’ve ever known.

I asked and discovered that none of them had ever been snowshoeing.

After I accepted the teaching position at Crosswalk Teen Shelter, I found out that I was pregnant with my second child. I knew that my time was limited before I would be leaving on maternity leave. But I had this image of my Crosswalk kids having the opportunity to just be kids again—exploring the natural world in a winter wonderland. I knew I had to make it happen.

The outdoors has been an incredible place of healing for me, personally, and I loved the idea of making that experience accessible to them. I made it my goal to give them the opportunity to go snowshoeing before I had to leave.

Honestly, I thought getting up early for a trek in the cold would be a hard sell for kids who know all too well what it’s like to sleep outside and whose main experience with walking was getting to and from the bus station. I was pleasantly surprised when several of my students seemed interested, and my heart swelled as I began to overhear them discussing the trip excitedly amongst themselves.

The Trip: Snowshoeing up Mt. Spokane 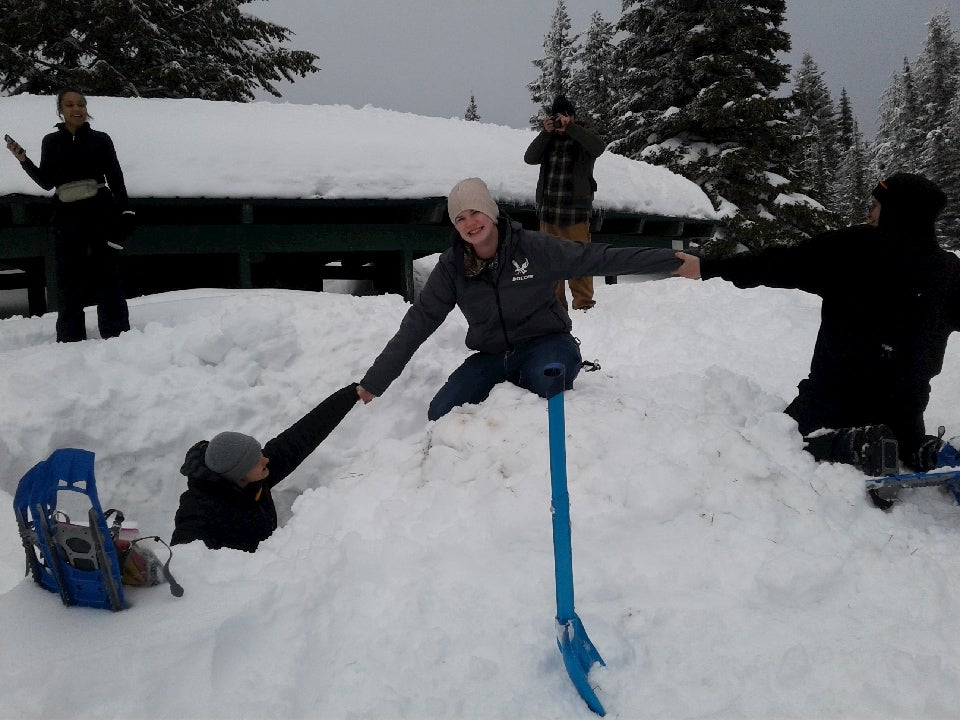 On March 14, 2019, four of my students experienced snowshoeing for the first time in their lives, climbing up Mt. Spokane as part of a field trip led by Kat Hall, Conservation & Education Director of The Lands Council in Spokane, Washington.

STEM-focused outdoor education programs like this one are offered by The Lands Council as part of Project SUSTAIN with the goal of restoring the connection between youth and nature; exposing students to the outdoors, empowering them with new knowledge and skills, and encouraging them to become responsible environmental stewards. In addition to the field trip, students also received a pre-trip snow science lesson taught by Maia Inniss, a Lands Council volunteer and Environmental Science Major at Eastern Washington University.

Here is the story of their trip, in the words of three students who took on extra work outside of class to write this article:

“The sight of the land and forest, with trees drooping from the weight of the snow, kept me thinking I was in some famous artist’s painting…”

KC: It was a beautiful day for a hike in the snow. The sun was shining with not a cloud in the sky with a cold breeze on our faces. On such a fine day you wouldn’t believe it was winter if you weren’t walking on 7 to 8 feet of snow. The mountainside smelled of pine and snow–well, if snow has a smell.

KC: The sight of the land and forest, with trees drooping from the weight of the snow, kept me thinking I was in some famous artist’s painting because the scenery was so breathtakingly beautiful.

Luce: Unlike in the city, you can’t smell the smog (chemicals, smoke, etc.) The air is very clean and I guess almost empty. Though it is harder to breathe. I’m not sure if that’s because of the elevation or because I’m not used to it.

Tyler: We passed a place on the mountain where a lichen called Old Man’s Beard grew. This lichen only grows in clean, unpolluted air, so we were breathing completely fresh air.

Within the first 5 minutes of hiking my calves hurt. It felt weird walking in the snowshoes at first. However, by the time we had descended the mountainside to take off our shoes at the bottom, my feet felt super small and weird as if I was missing something.

Luce: So what is snowshoeing? It’s strapping your feet into oversized, flat plastic, then hiking. But with bigger steps. Pretty simple.

The snowshoes made my feet feel way too big, proportion-wise, so I had to take way bigger steps to avoid tripping over myself. I usually drag my feet, so this was quite the challenge.

Other than people talking or the birds in the trees, we mostly heard just the crunching of snow, the squeak of metal against plastic on our snowshoes, and the occasional dog bark. However, when you’re all by yourself, it’s dead silent. So quiet that the air seems thick and strangling, yet somehow still remaining serene.

The snow is surprisingly hard, as if the snowflakes were bigger or some of it melted and then refroze. The snow tastes different up on the mountain. How do you explain a taste you’ve never tasted before? It’s definitely better than the snow you’d find around town. (It isn’t yellow or full of dirt or ice salt.) It sort of tastes like tap water; bitter and metallic, but harder. Crunchier.

Attempting temperature-control was challenging. While moving, you’re extremely hot and have to take off all your coats to avoid heatstroke. But stay still for 1-2 minutes and you’re frozen solid again, having to put everything back on and then some. It was similar to a bad fever; burning one second, a popsicle the next.

Learning About Snow and Safety 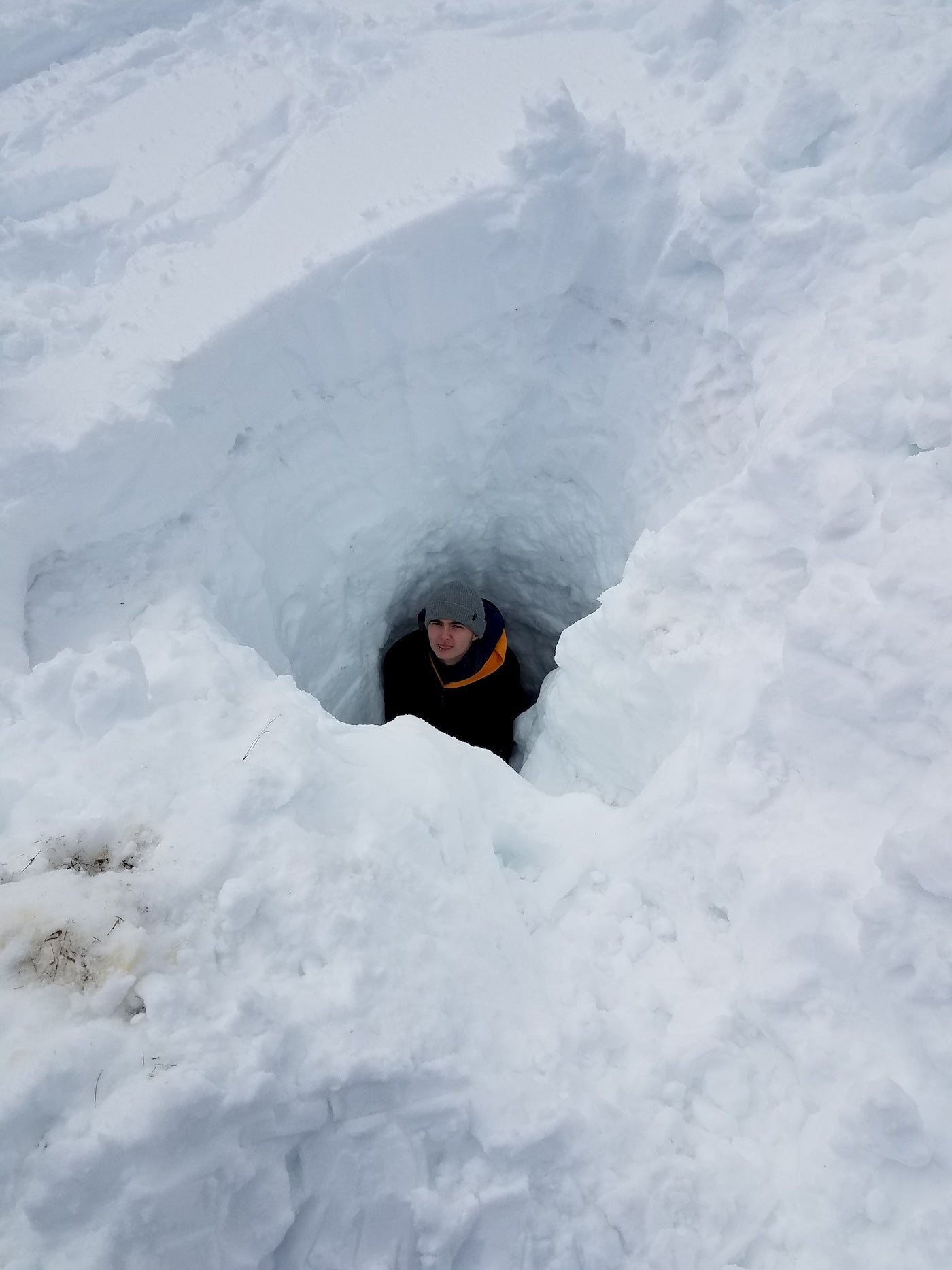 KC: Our wonderful guides for this hike made the whole trip so spectacular and fun, even the dogs: Nala (the hyper-energetic dog that has a major addiction to fetching sticks and snowballs) and the mighty Dakota (the three-legged warrior that climbed that mountain as if she had all four legs).

We learned so much from this trip. For example, we learned how to identify different animal tracks and which direction they were heading. We learned how some plants and other materials can coexist to survive harsh conditions.

One of the two main things I will be taking home from this trip is what a snow well is and how dangerous they are. The branches keep the snow from packing, so if you step too close to the trunk of a tree, you can fall 7 to 8 feet and seriously hurt yourself. The other main thing I learned is that in an emergency situation I can dig down so I can stay warm, as it is warmer closer to the ground.

All: Kat showed us this by digging almost 8 feet through the snow. We were surprised how deep the snow we were walking on was.

Kat used two thermometers to show us that it was colder at the top and better-insulated/warmer at the bottom of the snow pit. She even used popsicle sticks to show us the history of the snow. By examining the layers and how soft or hard they were, we could tell if the weather had been heating up or cooling down when that layer formed.

Luce: When the instructors offered—of course—I was the first and only one to get into the snow pit. I was told it would be easy to climb back out and that there were holes to put my feet in. But when it was time to get out? They failed me. The snow would fall apart beneath me and I’d just slide back down. Twice. The only way I finally managed to get out was being dragged by Tyler and KC. For a minute I panicked, thinking that I’d be stuck in there forever.

How Snowshoeing Will Stick With Us 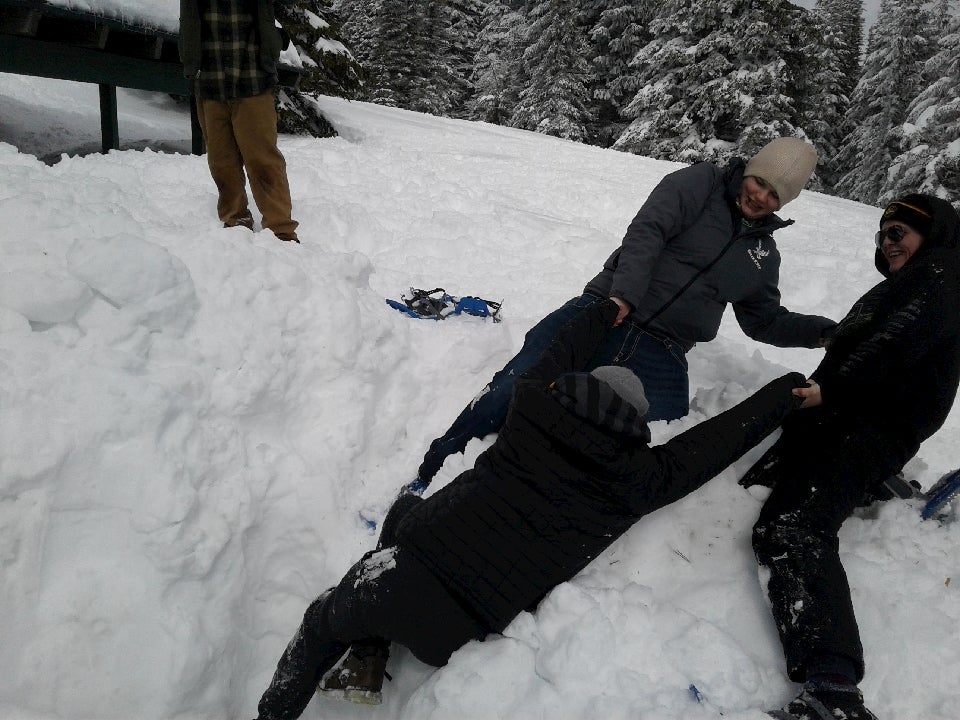 “I had never gone snowshoeing before this, but I can definitely say I need to buy some snowshoes so I can go whenever I want. It was such a blast!”

Luce: I felt a little awkward, but otherwise, really good! It was a (mostly) calm activity. I didn’t feel overwhelmed by so many of the usual sounds and things happening around me that make it so I can’t focus. I don’t get outside or exercise nearly as much as I want and should, so this was a change of pace for me. It was so worth it though. It was so fricking beautiful. It was nice to get a little time to myself, too.

KC: The most fun part of the trip was running downhill in snowshoes. They were way easier to run in than I expected. I had never gone snowshoeing before this, but I can definitely say I need to buy some snowshoes so I can go whenever I want. It was such a blast!

Tyler: I know it might sound clichě, but snowshoeing Mt. Spokane resembles everyday life. It’s tough getting to the top and you may question and consider turning back, and you could fall down. But when you get to the top the view is worth it. Though you’ve still got to be careful–you can reach rock bottom in under half the time it took you to climb up.

Due to the late stage of my pregnancy, I was not able to accompany my students on their snowshoeing trip. This was incredibly disappointing but in the best interest of everyone involved. The morning of the trip, I was pacing around my kitchen worrying: would anyone decide to go? Would they have enough snacks? Would they have fun or just be cold and miserable?

When I got the text with photos of four students snowshoeing with big smiles on their faces, I put my head down on my arms and happy-cried for a good fifteen minutes.

I am so thankful to everyone who made this trip possible and to my students for stepping outside of their comfort zones and trying something so new and different. I was especially happy to hear that this experience sparked their interest in trying other outdoor activities like hiking.

KC and Lucitine have now both completed their GEDs. Tyler has passed his first test and is on his way to passing the other three to complete his GED as well. All four of them are currently considering their options, including jobs, college, and maybe some more snowshoeing.

Linea Jantz is a teacher at the Crosswalk Youth Shelter in Spokane Washington. Students KC, Luce, and Tyler worked with Linea to compile this story.

6 Backcountry Yurts in Utah You Can Rent on Public Land 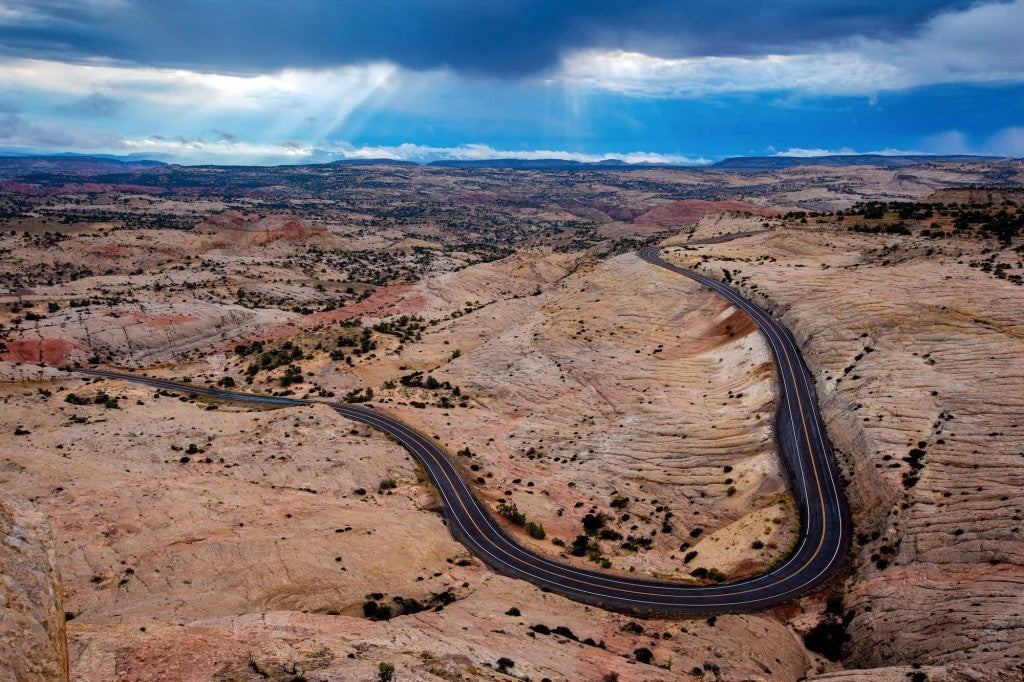 Wind Through Utah's Most Stark and Stunning Stretch on Highway 12

Step into the vast wilderness of southern Utah’s desert and it’ll seem like you’ve arrived on another planet. From towering red rock formations to winding…