#StillSheGoes: A Celebration of Women in the Outdoors Continues 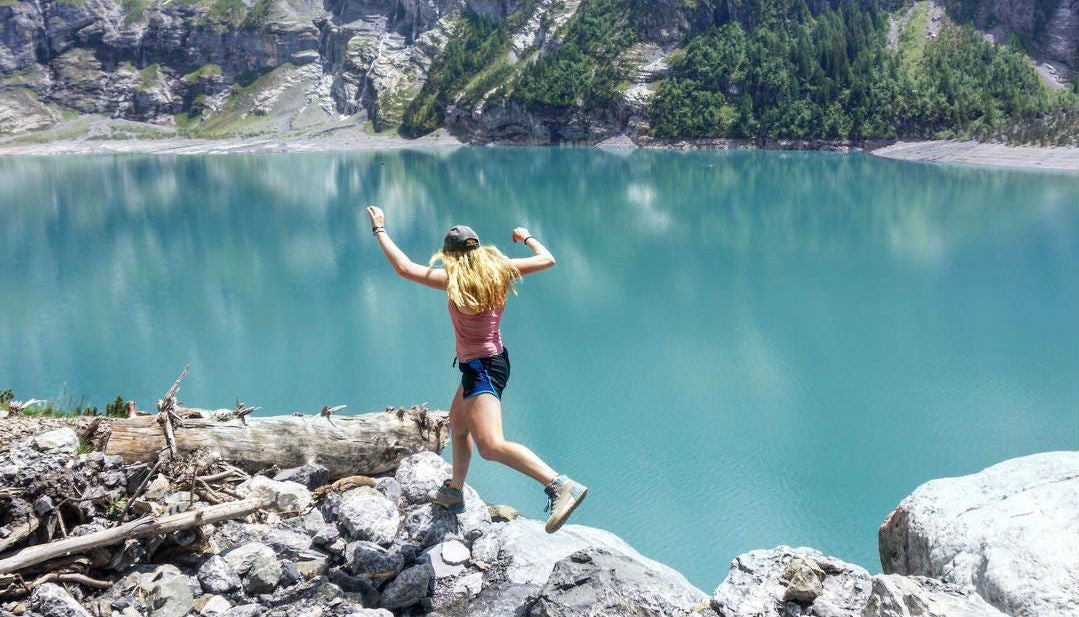 Women are embracing the outdoors everyday. They’re hiking, biking, camping, busting barriers, trying, falling, failing, achieving, and just being outside. For this year’s International Women’s Day, we celebrated women in the outdoors by asking women around the world to share stories of the challenges they face in the outdoors with the hashtag, #StillSheGoes.

The response was incredible, and provided further proof that women in the outdoors should be celebrated every. single. day. We should celebrate everyone who gets outside, shows respect for the outdoors, and finds joy in all that fresh air.

So we’re keeping the party going, all month and forever. Here is just a tiny sampling of the inspiring, uplifting, funny, heartwarming, and relatable stories we read from those participating in #StillSheGoes.

Words and Photos From Women Who Love the Outdoors #StillSheGoes

Thank you to everyone who shared!

@NativesOutdoors on Supporting Their Community

“Ambassador @jaylyngough – founder of @nativewomenswilderness. Today on International Women’s Day #stillshegoes celebrates women getting after it in the outdoors. Today we celebrate our ambassadors who make positive impacts in their communities each and everyday.”

@Tabsrathbone on Not Worrying About Speed

@Kristbyrne on Climbing, Despite Fear

“I have a tendency to turn rock climbing into a monster. My fear of falling and heights takes over, and I sometimes crumble under my own pressure to be “good” or “strong.” So why climb at all? Well, despite my fear, I really do love climbing. I love the feeling I get when I’m using my body to solve a natural puzzle; I love how connected I feel to our earth when I touch the rock. Which is why every single climbing session I choose to face these fears that momentarily prevent me from flying, because I truly believe I can conquer them. I wouldn’t keep pulling on rock or plastic if I didn’t.⠀
⠀
“Now if you’ll excuse me, today is a whipper day.”

@Americanalpine on a Historic Climb

“Here’s one of the AAC’s founding members, Annie Smith Peck, who climbed the Matterhorn in 1895. However, her successful summit of one of the most technical routes of the time was overshadowed by the question of whether or not she should be arrested for wearing pants. (Check the link in our bio to read her story.) Today, ladies worldwide are sending the hardest routes out there and putting up first ascents wearing whatever they like. We couldn’t be more excited to see where women lead the climbing community next!”

@Kylie.fly on the Inspiring Women All Over the World

@Intothewildrose With Words from Maya Angelou

[bctt tweet=”“A woman in harmony with her spirit is like a river flowing. She goes where she will without pretense and arrives at her destination prepared to be herself and only herself.” -Maya Angelou” username=”thedyrt”]

@Northlore_creative on Freckles and Scars

“For most of my life, I was told I could be anything I wanted to be. The caveat? That anything needed to fit neatly into a conventional little box. It needed to wear business clothes and high heels and rein in its wild hair and eyebrows and spirit. It should keep me out of the sun to keep my skin smooth and should buy me a house in the suburbs.
.
I remember smashing my face snowboarding when I was 16. I needed 8 stitches in my lip. In the emergency room, a massive fuss was made about finding a plastic surgeon to stitch me up so I wouldn’t have a scar. I waited for hours for the surgeon with blood dripping down my teeth. I have the scar anyways. It’s most apparent when the freckles that pepper my body from spending most of my life in the outdoors stand out defiantly against anyone who ever tried to dissuade me from being who I am.”

@Carolinegleich on the Future of Celebrating Women

“My dream for the future of this day is that we will grow it to celebrate individual women who have shaped history on individual days. For example, we could have Susan B Anthony day and Harriet Tubman day, just like we celebrate Martin Luther King Jr day and Washington and Lincoln at Presidents’ Day.”

@Compass_court on all women, everyday

“Every day is women’s day. Cheers to all the brave, independent, wandering women who keep me outside, pushing harder and jumping higher! I appreciate you. 🤸‍♀️🏔”

@B.happycamper On Our Collective Power

“We are past the days where we can be limited by anyone but ourselves. Together we are powerful; so lift each other up and cheer each other on! For those intersted I’d like to share a store below of a women who has empowered me to be me, no matter what that means and no matter what other’s think!”

@Live.true.stories on Honoring her Grandmother’s Bravery

“Growing up, I took my grandmother’s adventures for granted. Hiking in the Holy Land, mountain biking in Alaska, and carting a canoe around on her Schwinn– that’s just what she did. It wasn’t until I got older that I realized how remarkable it was that she ventured out on these fearless outdoor treks in an era when most women were expected to stay home. She never seemed to notice the obstacles, though, which women still faces as we work to make room for ourselves outdoors. She was too busy having fun.”

@Maileagomez with words from Katie Makkai

“This, this is about my own some-day daughter. When you approach me, already stung-stayed with insecurity, begging, “Mom, will I be pretty? Will I be pretty? , ” I will wipe that question from your mouth like cheap lipstick and answer no.

“The word pretty is unworthy of everything you will be, and no child of mine will be contained in five letters. You will be pretty intelligent, pretty creative, pretty amazing, but you will never be merely “pretty.”

@Elainevardamis with Words from Calamity Jane

[bctt tweet=”“I figure, if a girl wants to be a legend, she should just go ahead and be one.” – Calamity Jane” username=”thedyrt”]

“If you think being the founder of a tech startup is hard, you’re right. It is incredibly hard, and very few companies succeed. But it’s a hell of a lot harder founding a tech startup as a woman. And harder still if you are not a programmer. And harder still if you’re over 40. And yet, The Dyrt’s founder Sarah Smith has taken the company from an idea 5 years ago, to the website’s official launch 2 years ago, to today, when The Dyrt is the fastest-growing camping app with thousands of authentic campsite reviews in every state in the U.S. ⠀
⠀
In just 2 short years, Sarah Smith has brought together more campers across the U.S. than anyone before her, and she’s just getting started.”

@Lacelaya on Blisters and Mansplaining

“In spite of the oozing blisters, the deep sunburns, the strangers mansplaining, the “she’s thick for mountains” comments, the altitude sickness, and the struggle to find gear that fits strong bodies…”

@MeganWalsh11 on Embracing fear in the Backcountry

“I am often afraid. Afraid of gear failing. Afraid of an avalanche propagating. Afraid of bears tearing through my campsite in the middle of the night. More than all of that, I’m afraid of judgement.

“I have spent hours on ski hills and running trails, in climbing gyms and coffee shops, consciously making decisions based on how others might perceive me. Will they laugh if I fall off this V3? What will they think if I eat shit on this baby jump? Man, I really shouldn’t be this winded on a two-mile trail run.

“What I’ve begun to realize, though, is something the band 3LW realized back in 2000: Haters gonna hate. Also, I have absolutely zero control over what thoughts people have in their minds. So I keep going. I fall on climbs I know I can’t do. I make informed decisions in the backcountry. I tell myself bears are friends, and I’m not their food.⠀

“I keep going, because fear won for far too long. Courage triumphs. And I really love a good adventure.”

@Ourvanstella on Love and Freedom

“This photo was taken the day that Ian proposed with the van instead of a big shiny ring. Ian proposed with the van because he knew that I am woman who doesn’t need a diamond to feel like a princess. Instead he knows that I am a woman who craves barefoot adventures, running wild with rootless expectations, and who takes deep breaths through life and needs nothing but to feel free with who and where she is.”

“It’s always been my dream to write stories about faraway places and fascinating people. But they told me that faraway places are dangerous, and you can’t tell who’s fascinating and who might hurt you. They told me, don’t go alone. It isn’t safe out there.⠀
⠀
But the stories I want to write won’t wait for my friends to find time to join me for a four-week road trip across country. So, I often go alone. I drive down long, quiet roads and I camp in the sand and the sagebrush of inhospitable deserts with my dog. Out there on my own, that’s where I find stories. And that’s where I find the truest version of me. There are times, though few and far between, when my solo adventures feel dangerous. But more often than not, they just feel necessary.”

“For the next few days, I find myself alone in this van like I have so many times before.

This morning I will back seamlessly into a grocery store parking lot under the careful gaze of men. “Impressive park job,” they’ll say. “Where’d you learn how to drive that big old thing,” they’ll say.

Inside, I’ll scan the aisles for cans of propane for my stove and meals to prepare for one.
Across the street, I’ll haul full, sloshing red gas cans precariously up the ladder and tie them to the roof rack for the long journey ahead.

I’ll lift the van’s hood and check the engine oil and then I’ll take off down the highway at the helm of that unpredictable old bus.

Hours later, at the mouth of the dirt road, with cell phone service a distant memory and the dogs pacing back and forth, I’ll jump out to switch on my manual locking hubs and check to make sure I have my off-road jack.

@ErinOutdoors on Meeting a Role Model

“I had an opportunity to meet a woman I very much admire a few weeks ago. We talked about life, about photography, about business and about working in an industry that is still very male. She said when she started, they were laughing at her for the decisions she made, the gear she chose to use.

“We looked into the bonfire, she took a sip of her drink and smiled,

“The weather is never perfect; or, rarely. But we love the rain, wind, snow, sleet, hail, and even the occasional burning sun. We tell ourselves in the moment that it’ll feel like Type 2 fun later. And it does. So, we go.”

There are so many stories to share. Their stories. Your stories. Keep telling them. #StillSheGoes 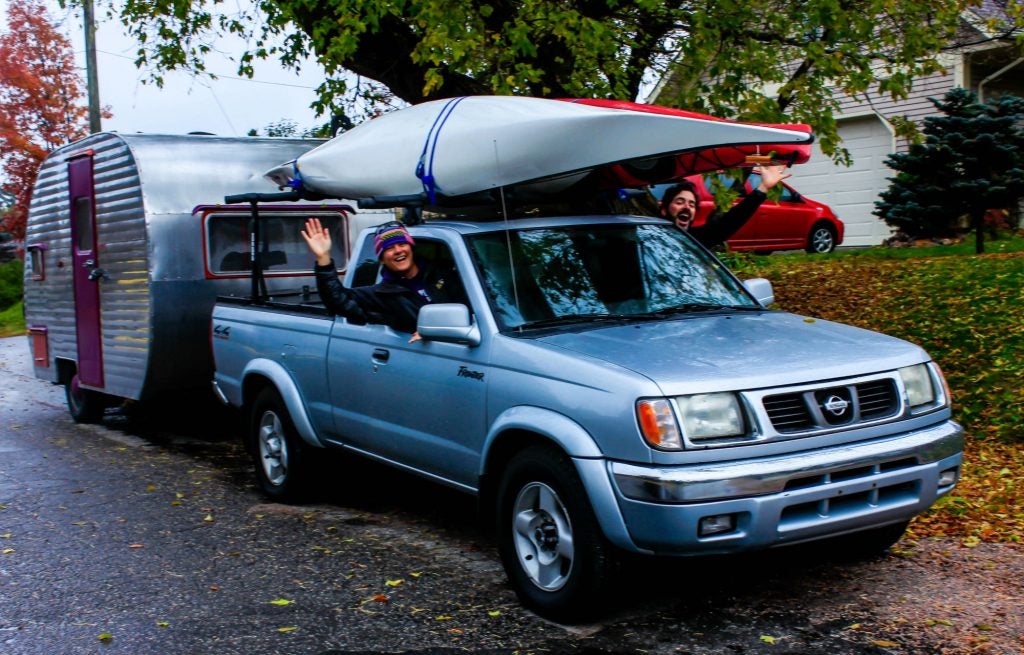 Full-Time Campers: How to Prepare for Life on the Road

Meet Hutch and Shari! They turned a 1957 vintage trailer into 72 square feet of home on the road. These full-time campers travel regularly, camp… 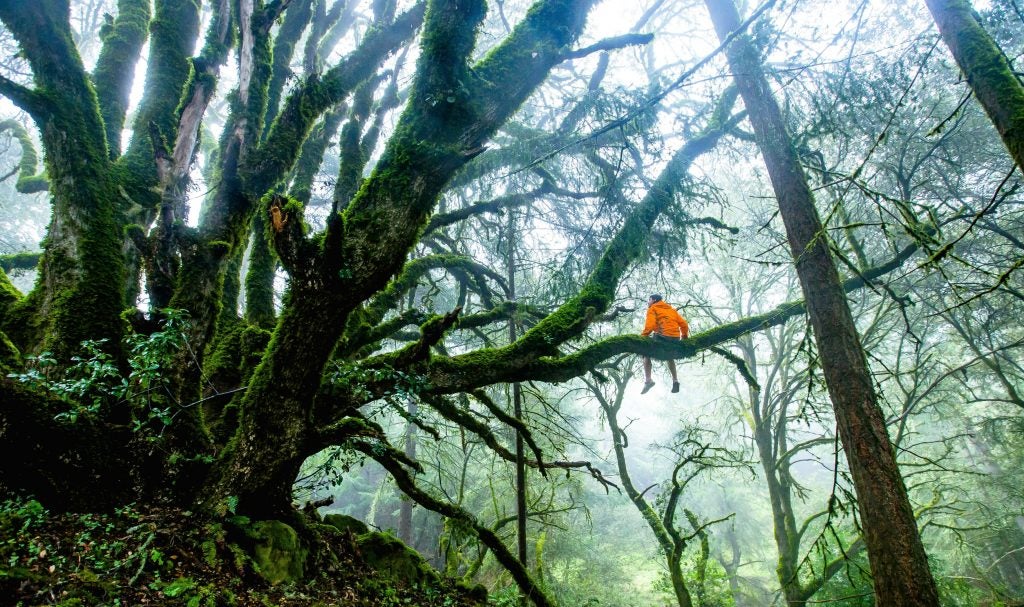 If you’re the kind of person who likes to pack their weekends with hikes, climbs, slopes, and speed, you’re going to want to take a…