Bound For Nowhere: 5 rigs and 5 years on the road

About 5 years ago, Mak and Owen fell in love with overlanding and decided to hit the road full time. They pride themselves in getting farther out there than the average full-time van lifer or RVer with a whole lot of time spent off-roading and hiking in the backcountry. In this 5 year span, they have been the proud owners of 5 super unique setups. I asked Mak and Owen to share their experience with these setups and asked them questions about living on the road. Read their responses below!

5 Rigs and 5 Years On The Road 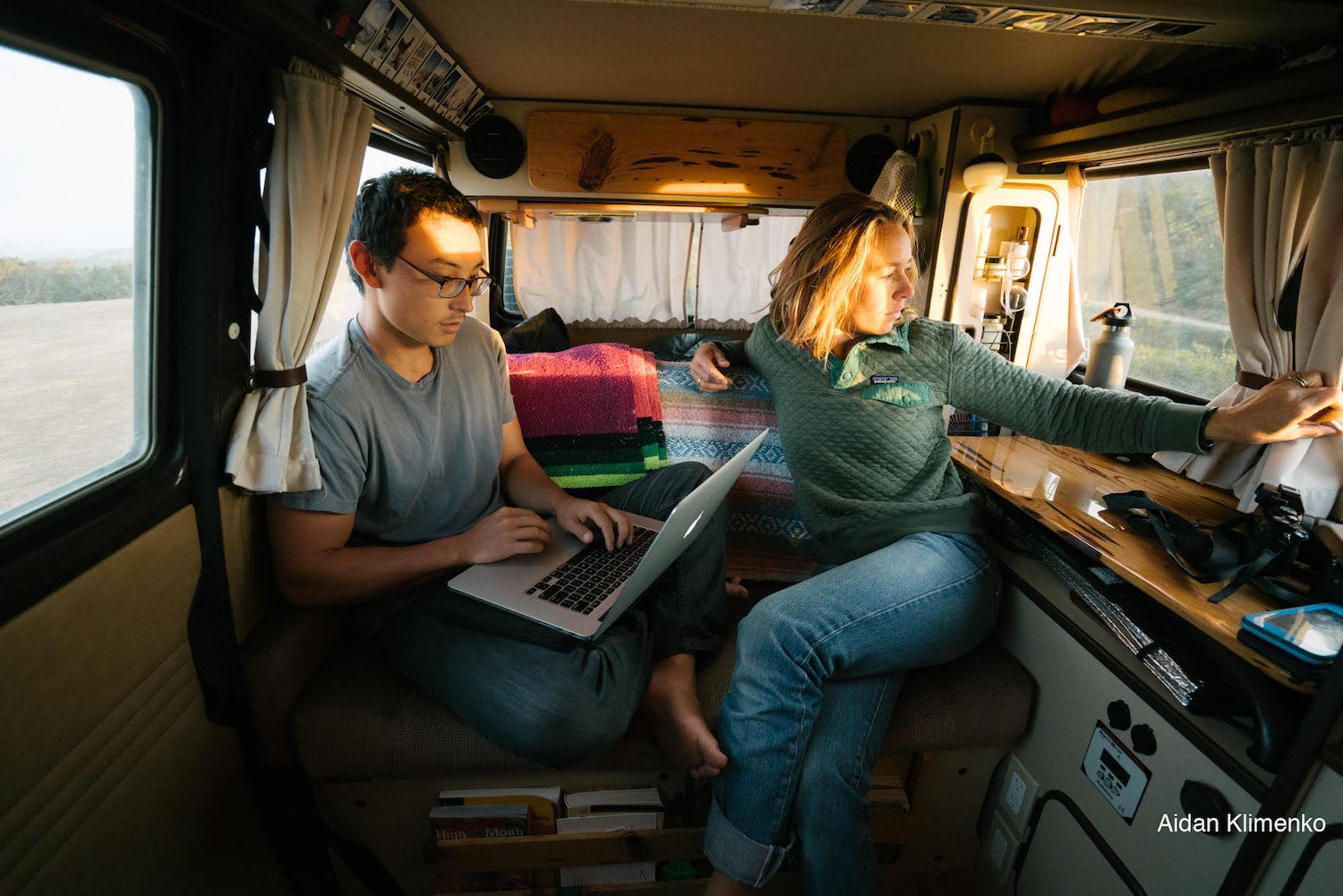 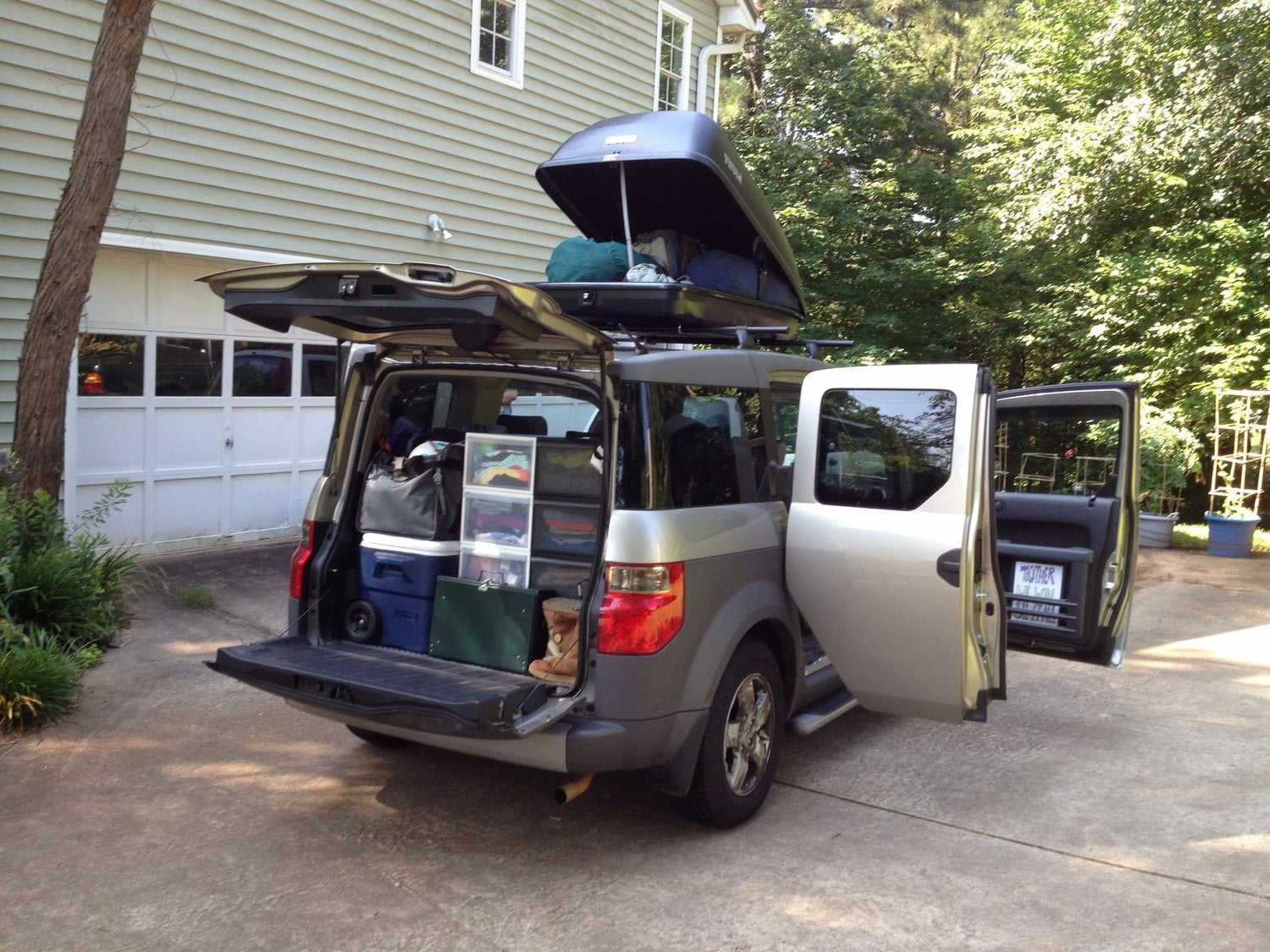 This was the car that started it all for us. We traveled for over 6 months from the Element with just a little money in our savings account and some hand-me-down camping gear from our parents after college. While we were on this trip we realized that we loved the movement more than we loved any one particular place. 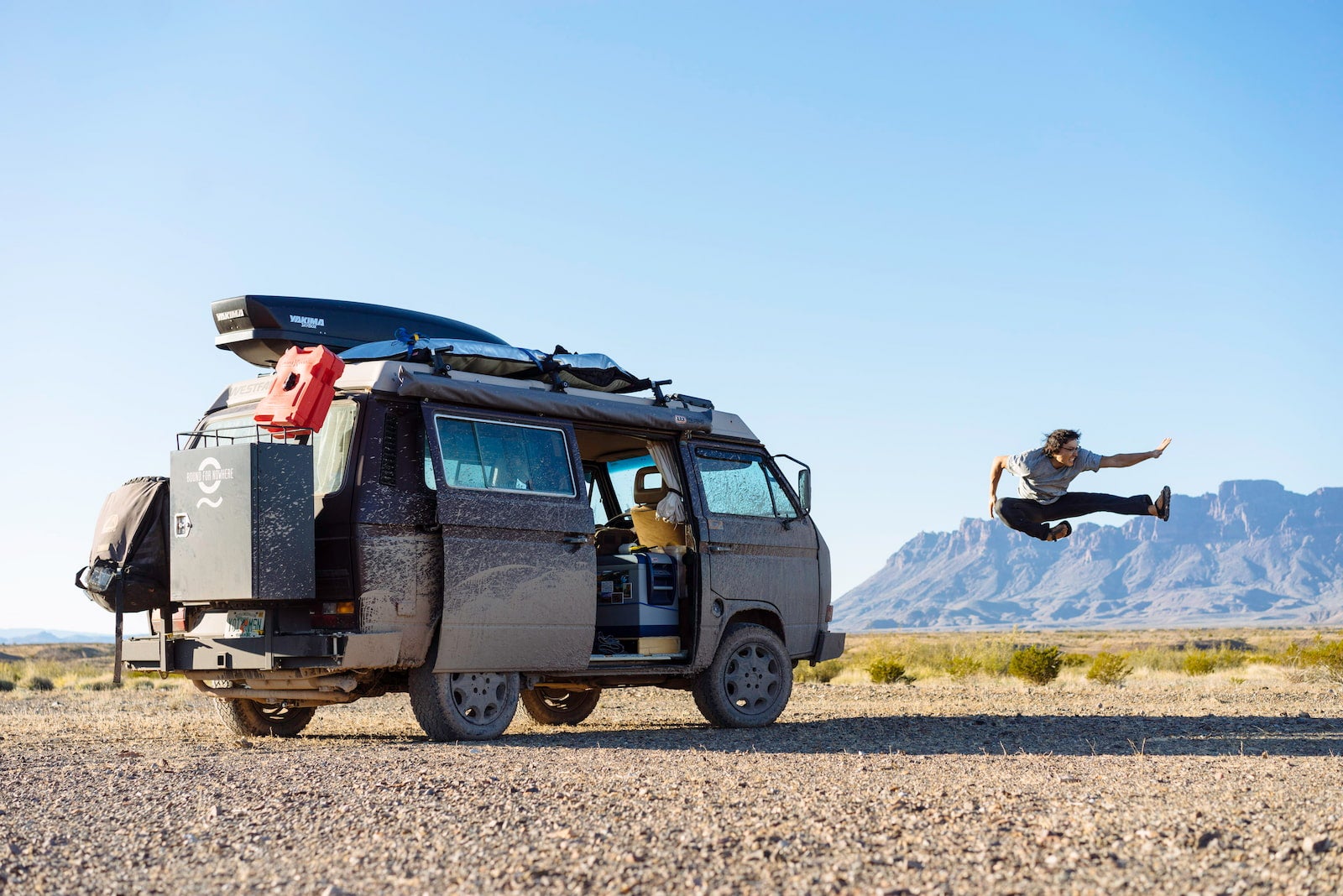 After we ran out of money when we were traveling in the Element we had to come crashing back into reality to find jobs so we could start our careers. Before we knew it we each had 9-5 desk jobs, bought a house, and it was two years later. One day we had the realization that we wanted to get back on the road but find a way to bring our careers with us so we could travel sustainably. We immediately knew that we wanted a Vanagon as our next vehicle/home on wheels because the Westy is such a nostalgic vehicle with an incredibly liveable interior. We purchased our van which we named Stanley and worked on him for about a year before hitting the road!

Amelia was a rare 1985 4×4 Toyota Sunrader. It was rumored that only 22 of them were ever made. We purchased her because our van Stanley was having repeat expensive breakdowns that nearly drained us of all of our money. We needed to switch to something that would be more reliable. We felt it was important to switch to a vehicle that would allow us to move our attention to ourselves and travels rather than just keeping our rig moving. We found her on Craigslist and bought her bone stock with the idea that we’d do a full build on her interior to make her more comfortable for full-time travel and work. We spent nine months taking her all the way down to the fiberglass and building her back up. We were so proud of what we made of her. 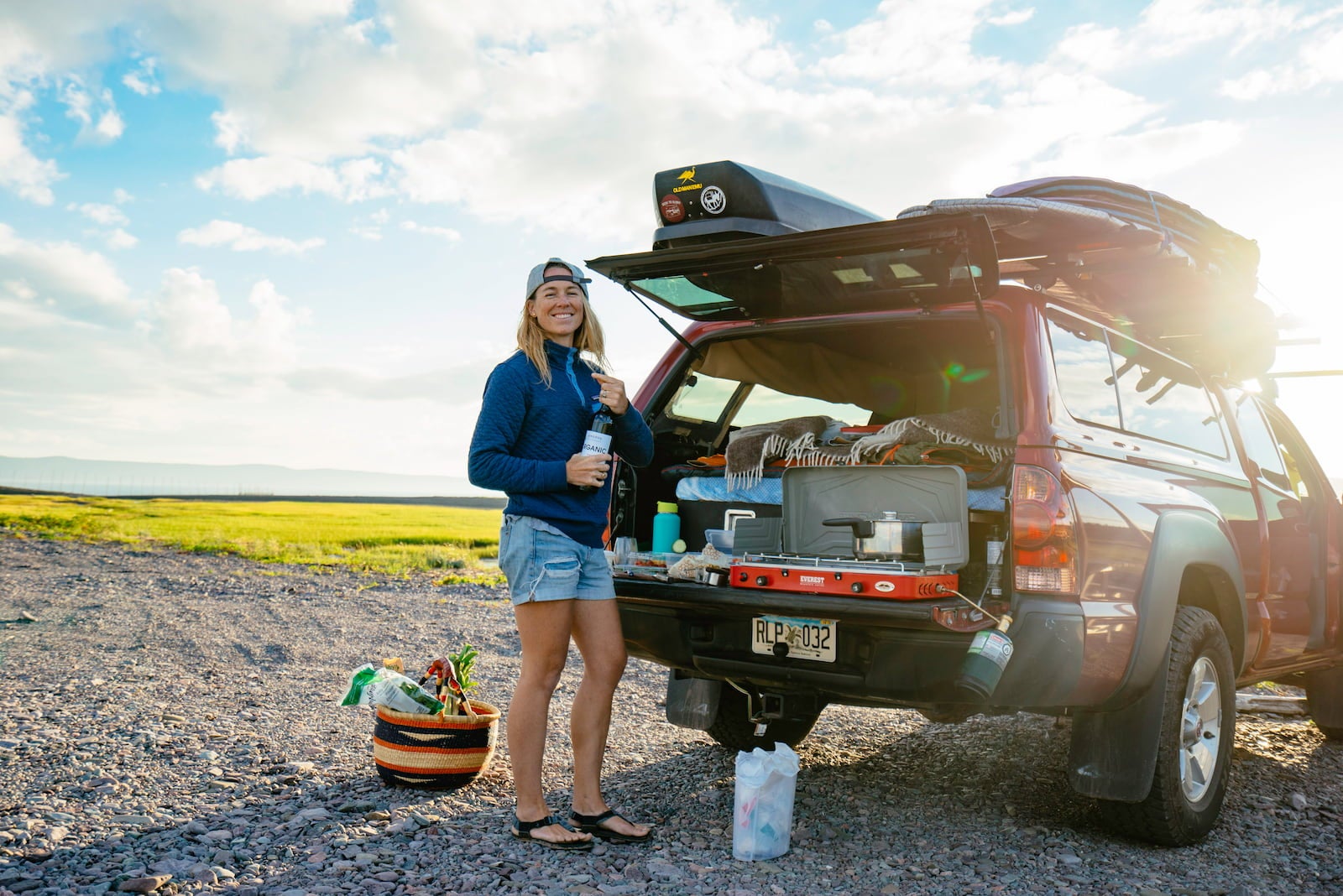 Our Tacoma which we named Lando came sadly just two weeks after getting back on the road with Amelia. After doing an entire build-out we had such a hard time getting the suspension dialed in and fixed after a massive factory recall on the rear axle. We made the hard call to sell her, again in an effort to not have an overly needy vehicle. We bought Lando and spent a weekend and $395 building out the camper shell where we lived for nine months as we traveled the easter seaboard of Canada. Lando took us to New Brunswick, Prince Edward Island, Nova Scotia, New Foundland, Labrador, Quebec, and Ontario.

Over that time he helped us fall back in love with the road. When we purchased Lando we knew that it wasn’t going to be our long-term rig because of the lack of space and power system to do our work. We just needed something to help us put some distance between us and the failed attempt to turn Amelia into our forever rig. Ultimately while we were traveling in Lando we figured out what our next rig was going to be and it went into production. 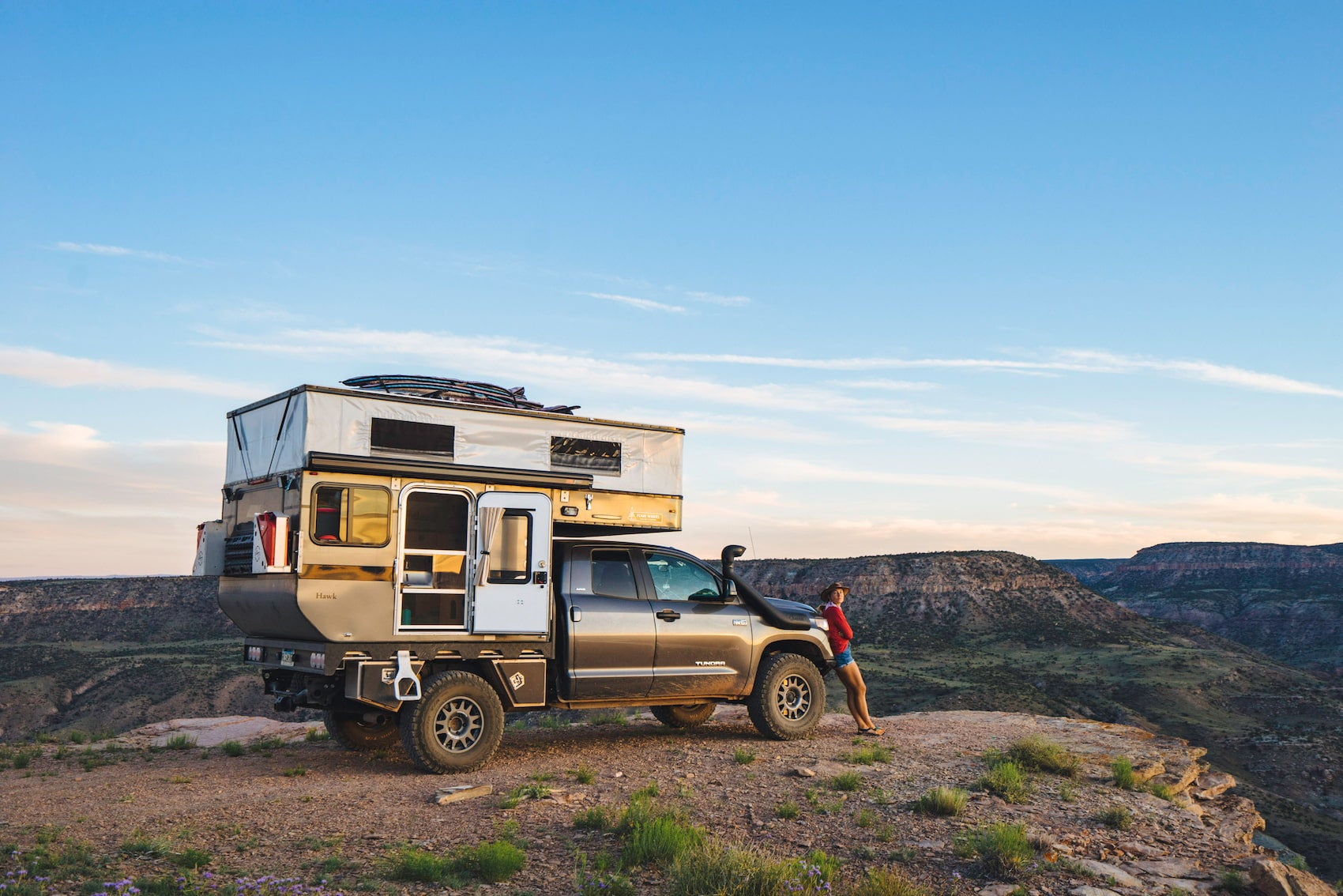 Enter Roxanne. She took about nine months to be built (thankfully not by us this time, but instead the wonderful and knowledgeable crew at Main Line Overland). She is our current home on wheels that we’ve been traveling in since February 2019. We refer to her as our “Slumdog Millionaire” rig in that every decision that went into her was directly influenced by something that went wrong, broke, or we didn’t have on our other vehicles. Even though she is far more “elaborate” than any of our other vehicles, every accessory, bell and whistle that we have now is insurance for us and those we come across on the road. In the past we relied on others to happen upon us and kindly winch us out of bad spots. Now we have a winch and have helped others get out of pickles. We’ve been caught with flat tires in the past, now we have an air compressor and often stop to help fill other people’s tires. The list goes on. At times it was painful getting to where we are now, but all of those other vehicles made us wiser and resulted in Roxanne. We can confidently say that we’ve been able to travel without any breakdowns for over two years now… and WOW does it feel amazing to be able to say that!

Are there things still you miss about the comforts of home or have you completely acclimated to your nomadic life?

I would say that at five years into life on the road we’re fully acclimated! We used to joke that the only thing that we miss is having access to an ice maker… now we have a freezer in our Four Wheel Camper so we have everything we could ever want! More seriously though what we miss about having one place to go back to isn’t anything tangible as much as it is community. We miss having access to a strong art community. As designers and creatives we loved going to gallery shows, performances and things like that before hitting the road. Though we don’t get the chance to do things like that as often anymore, our road family is endlessly creative and they’re inspiring to be around. All of that to say that our art community just looks a little different out here!

What is your favorite campsite or camping spot? 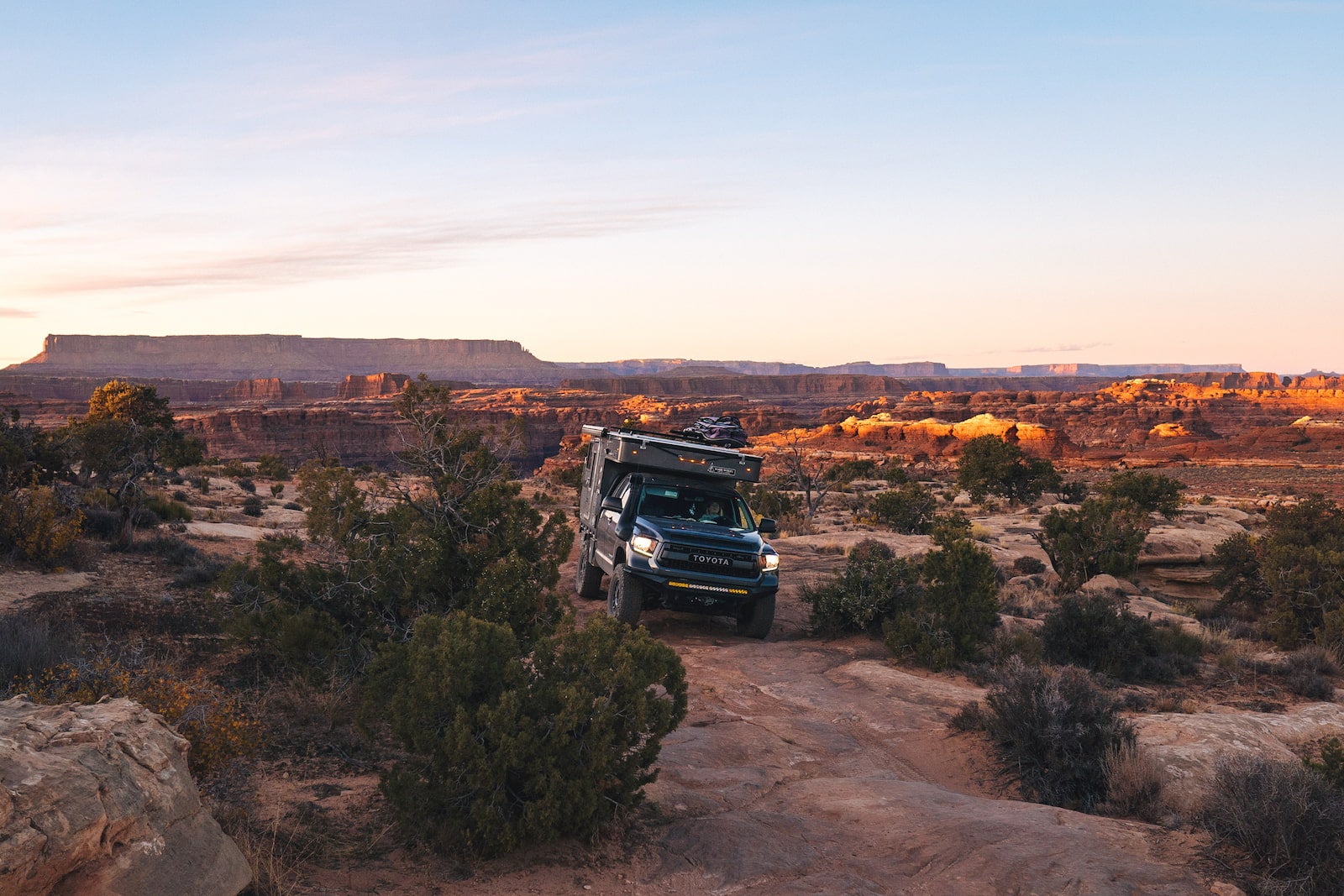 Our favorite area to camp has to be in Southern Utah. There are so many incredible areas down there that it feels like you could spend a lifetime in the area and never see it all. We also love Native American Art and Architecture and it’s a great place to immerse yourself in it.

Of all the places you have been in the U.S., which has surprised you the most?

Idaho. After just a few days there we kept saying “Why is no one talking about how incredible it is here?!” Idaho has some of the most expansive wilderness tracks in the lower 48, the fishing is incredible, the Sawtooth Mountains are unlike any other here in the states, and the hiking is something to write home about.

What is your favorite piece of camping gear? 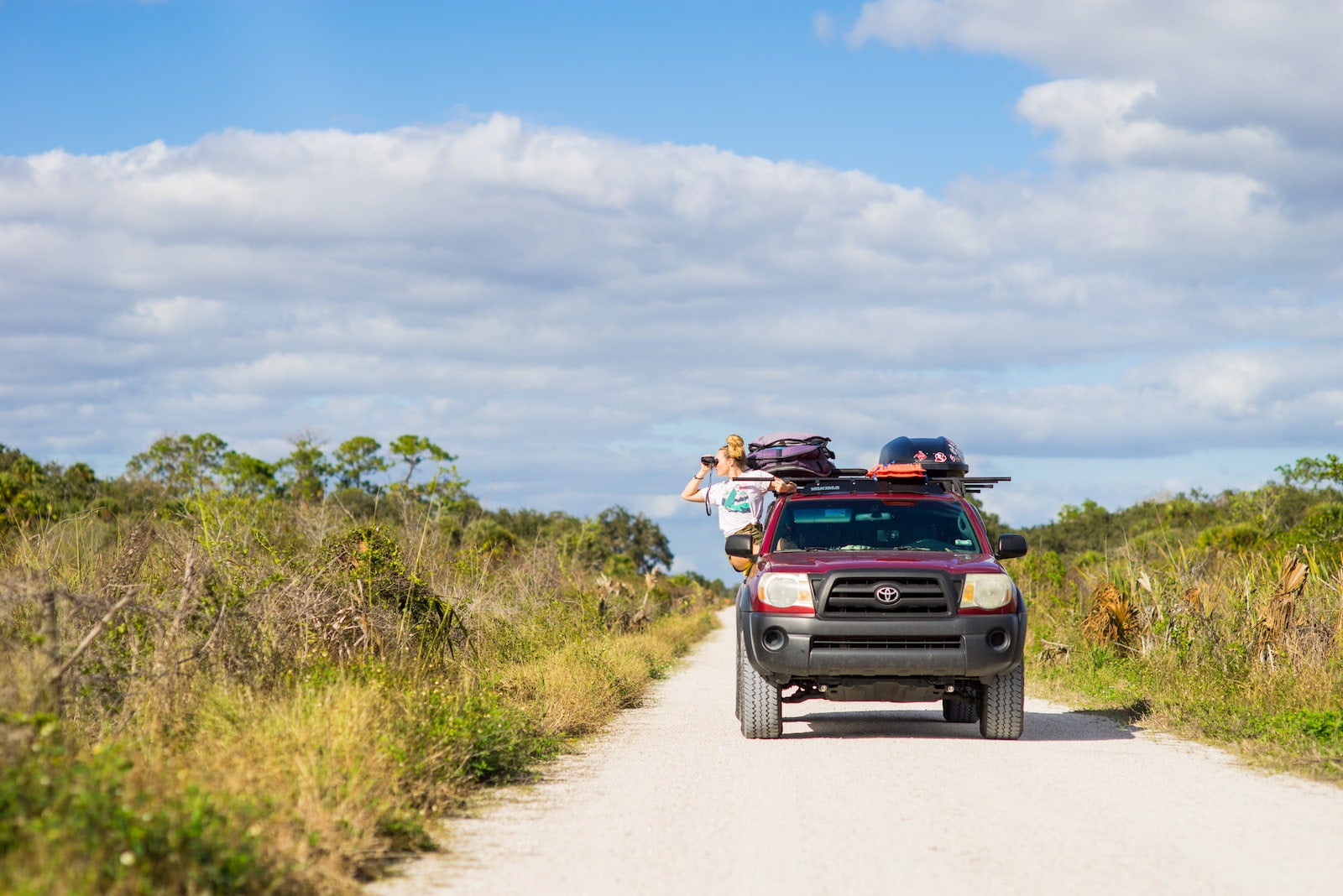 Binoculars! We always forget about them when people ask us this question, but not today! There isn’t a day that goes by that we don’t use Binoculars for route finding or just taking in the view!

You guys have had a variety of unique rigs? Is there any rig out there that you are interested in trying or curious about?

Owen and I have a lot of dream rigs. One is a Toyota Landcruiser Troop Carrier. They were never sold in the US but they are compact, rugged, capable, and very livable! It isn’t a matter of if we will have one, just when. For a while Owen and I joked about building an all-wheel-drive Prius for long-term touring, it’s moved past the joke phase and we’ve actually discussed it extensively. We thought it would be a fun challenge while also getting something more environmentally friendly!

What is one piece of advice you would give those looking to get on the road for an extended road trip?

Don’t wait until you have it ALL figured out, if you do that you are wasting valuable time that you could be enjoying on the road. I understand the desire to have things all sorted out before leaving but to be honest you will never truly know how to prepare until you get out there and learn by doing! Then you’re learning but also making some incredible memories in the process. Also, take it from us that you can figure it out as you go (see extensive rig swapping to find the right one)!

Tell me about Summer Adrift! What inspired this project and do you see another season of longer-form videos in the future? 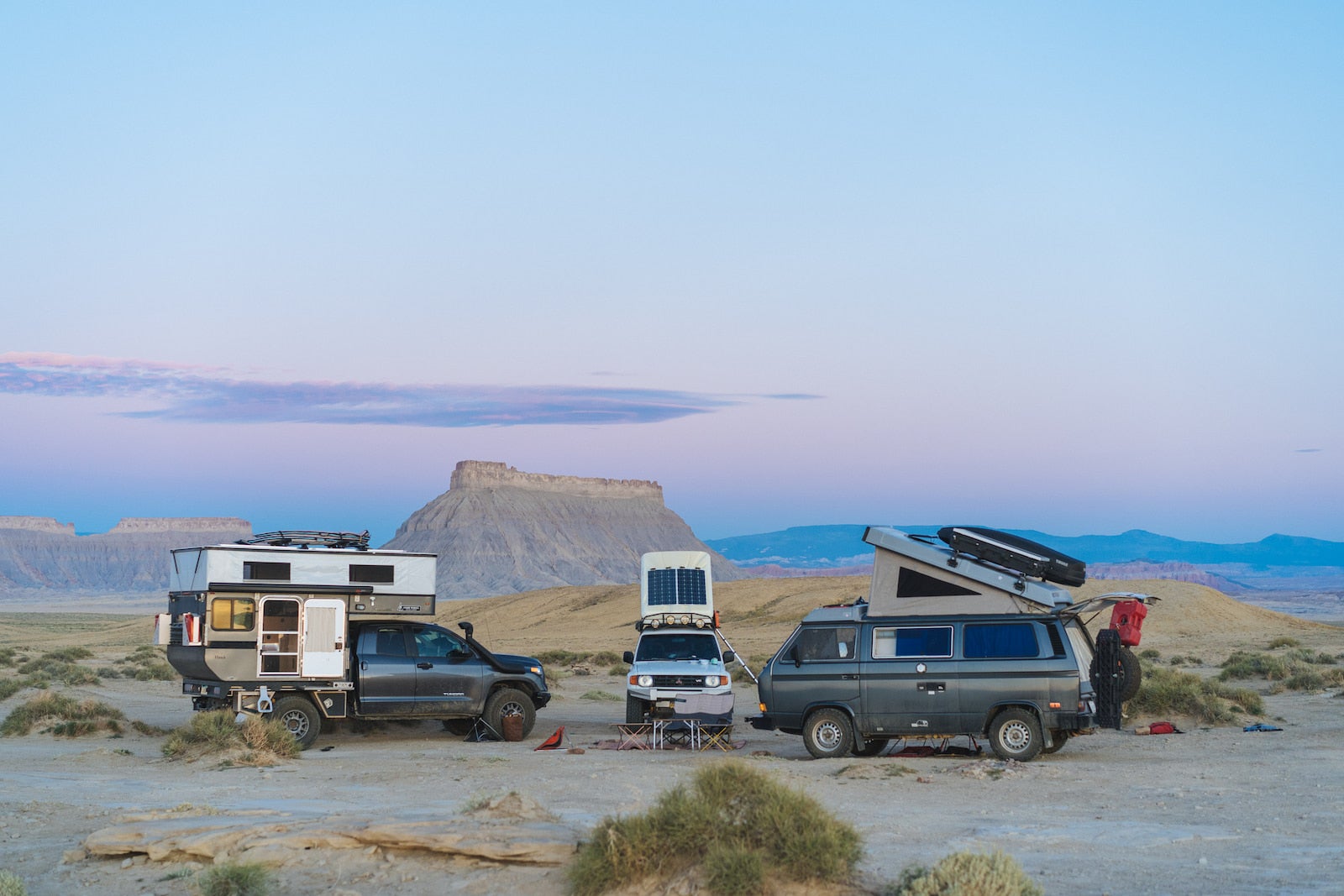 A Summer Adrift was a sixteen-episode video series that we made documenting our travels from leaving quarantine in late May 2020 through the end of the summer (September 2020). The whole point of the series was to capture what it was like to live on the road during a challenging year while remaining focused on staying happy and healthy.

Last year was clearly a weird year, and it felt like an important time to document what life was like to navigate it all while still living on the road. We were lucky enough to have three groups of friends Peter & Shruthi, Chase & Aimee and Karissa & Linhbergh traveling with us. We felt traveling as a group was a good way to keep morale high, combine our resources so we could be more remote for longer, and just be together after us all having our plans wiped off the calendar. As adults, we don’t always get the opportunity to spend that much time with others and it felt like we were a part of a team.

We plan to film another series! In fact, we are working our way up the western seaboard towards Washington where we will be catching the car ferry up to Alaska where we plan to spend our last summer in the North American continent! We will be documenting our travels the whole way to turn into a new series in the fall! It is yet to be named, but I’m sure something fun will jump out to us along the way!

To keep up to date on Mak and Owen’s adventures make sure to follow them @boundfornowhere and keep your eyes peeled for new videos coming out on their Youtube channel.

Maggie Fisher is a photographer, outdoor enthusiast, and avid traveler. Based in Burlington, VT, you can find Maggie skinning in the Green Mountains, hiking switchbackless trails or paddling across Lake Champlain. She dabbles in activities ranging from rollerblading, to climbing, to skiing, to surfing, to sailing, to petting every dog in sight. Check out more of her work at https://mjf.design/ 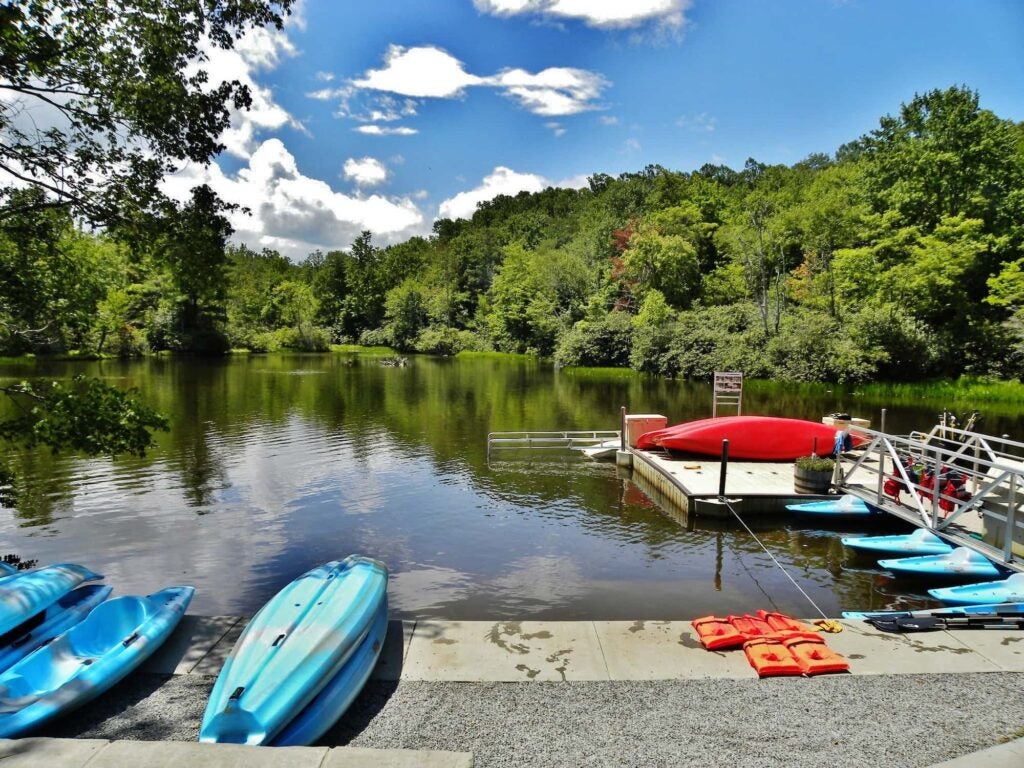 This article about Grandfather Mountain Camping is brought to you by Crazy Creek. Their wide variety of chairs are perfect for enjoying any of these… 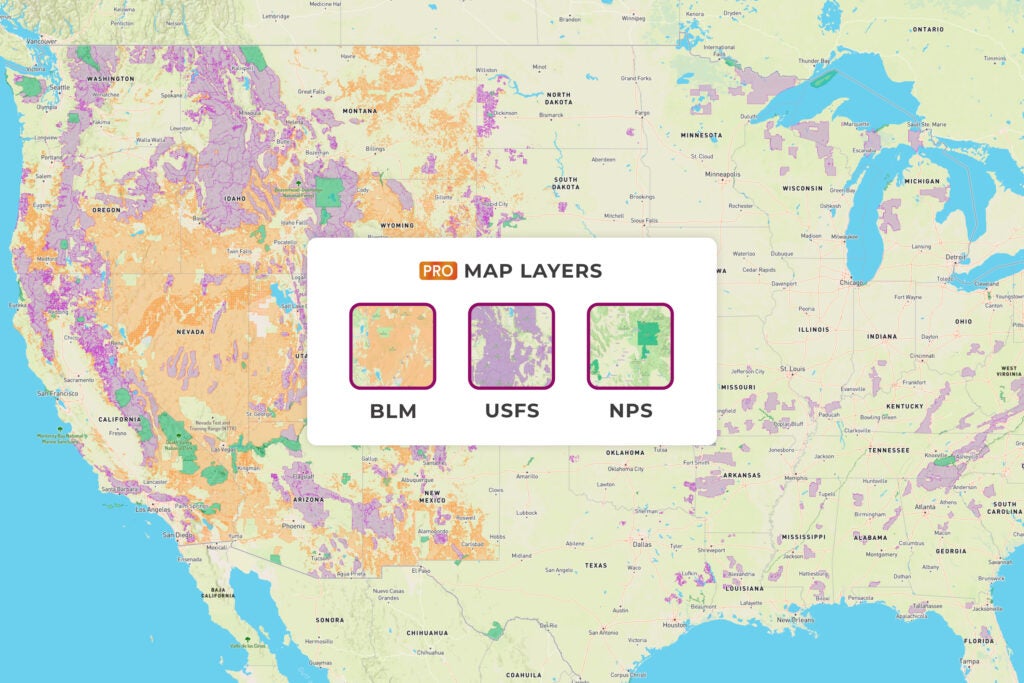 How to Find Free Camping with USFS & BLM Map Layers

Did you know you can camp for free in many public land areas in the US? It’s relatively easy, but it can be hard to…