has anyone been tent camping with young kids? We have a 1 year old and a 3 year old. Any tips?

Yes, we do it all the time. They’re so tired from running around outside all day that they zonk out immediately. Our 5 year old sleeps in his own solo tent now!

We have!! Usually with teeny ones, we forego sleeping bags altogether and make a few layers of blankets on the bottom and one or two on the top, and basically make it like co-sleeping but in a tent. And EVERY one of our babies (3 now) has slept MUCH better in tents than in the house!!

We’ve been camping with the girls since the oldest was 6 months old. Our biggest life saver was getting a screen tent that they could play in and stay contained and cool so I could prep meals or so they could nap without being overheated if the sun was on the tent.

we started camping when my oldest was 5. We camped while i was pregnant and as each baby was born, we camped. I think the key was to not have too many expectations of what can be done in a day outdoors with an infant as well as having enough safe space for playtime and naps.

My first learned to crawl when camping. There was suddenly really interesting things to see and wiggling over the hard ground was uncomfortable so he crawled.

I have 4 kids–mostly grown. I personally probably wouldn’t get much enjoyment out of the camping experience with babies and/or toddlers, but I know many do. We didn’t take our kids camping until the youngest was around 5. Something to consider–nobody loves your kids like you do lol. Like if your kid is having a meltdown at 9 or 10 at night, the whole campground can hear it. Make no mistake… a toddler’s screams carry a long, long way. Our last camping trip there was a family with several really young children–preschool/toddlers. Wow. There was so much screaming. In a situation like that, I’d say camping doesn’t agree with them, and try again in a year or two. They just sounded miserable at times, and as a semi empty nester–I’ll admit it was a little annoying. I can’t help it. It’s like…been there done that and don’t want to go back. I’ve paid my dues.

Another tent camping trip we took there was another large family, and one of the kids was sick with a terrible cough. That poor child coughed ALL NIGHT LONG–temps in the 50’s. I felt so bad for the child, but I also couldn’t sleep! I’m just surprised that the parents weren’t phased by either circumstance, but the other campers most definitely WERE. Happy playing child noises–even when they are loud–don’t bother me at all. But when you have a tantrum/screamer, think twice about camping. For your sake and your camper neighbors. Of course if you’re camping in the wilderness with no one around, none of this matters! 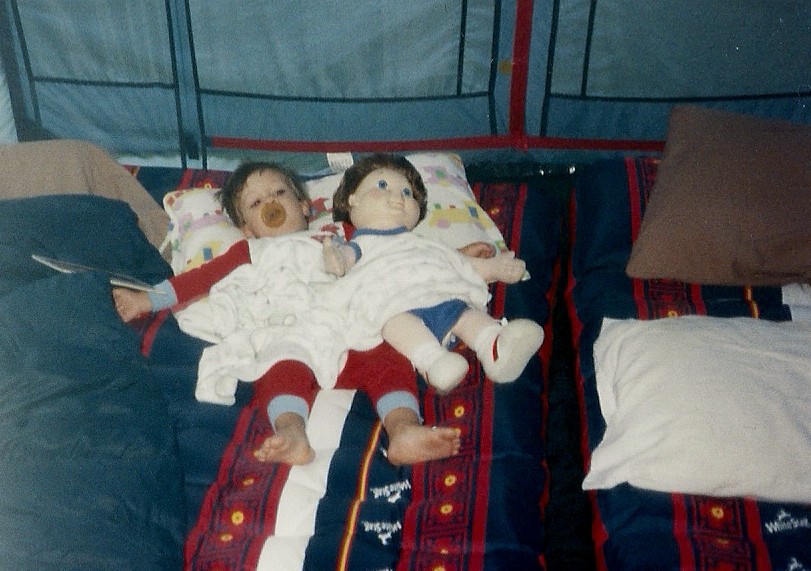 camping buddies811×571 132 KB
Our son’s first camping trip was at seven months. He took his “buddy” with him, and that made it better as a whole for all of us. He LOVED camping with his buddy and crawling around in the tent. When my son had a child of his own, we took him camping, and he had “Smoky” (a black teddy bear) with him. The tradition continues.
Audrey_R September 7, 2020, 8:49am #10

Always camped with my babies. Pack n’ play and/or small inflatable pool very useful. Also, dispersed camping can be a bit rocky so don’t plan on a stroller. Instead, pack a laundry basket with blankets and attach a rope. If you have older kids around, they can pull the little ones around for fun or to put them to sleep. 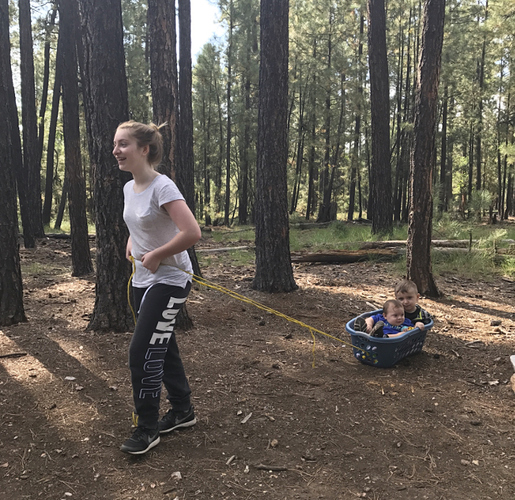 When my kids were little we went camping often. Bringing a couple of bags of play sand and a Ziplock full of sandbox toys kept my kiddos happily occupied. Slashing open the new sand bags became our first arrival routine so we could pitch the tent and set up our camp. I also brought the smallest blow-up kiddie pool (like 24 in) not only to help them cool-off, but I took it into the shower with me for a baby bathtub.

I was at Cabelas the other day and discovered that someone makes a camping high chair now! It seems a lot more portable than the saucer seat we used in those days, haha.

Our babies are 23 & 25 yo respectively now but we took them camping before they could walk. We’d go on 20 mile hikes with their heads carefully supported in the papoose. They’d pack all their toys but spend the week playing with a stick. They still love camping/hiking so we must have done something right?

I feel the same way about the different kid noises. My sister took her 5 yo and 3 yo twins camping last summer for the first time, and they specifically went somewhere close to home. Everyone was miserable from the mid-summer heat, and at night the raccoons were loudly fighting each other and trying to break into a neighboring tent. They went home that night and came back the next day to enjoy their site until it was checkout time. Being close to home allowed them to demonstrate common courtesy that would have been difficult to accomplish if they were further than 30 minutes away from home.

I normally do hike on my own as I am by myself most of the time. I actually have spoken to several rangers with regard to specific parks particularly and all of them advocate doing some things.

You can see more about coleman tents